Bloodbath is a ferocious, skilled mercenary with unusual strength and superior combat skills.

He almost always use killing blows (in DC Heroes RPG terms, he subs his Martial Arts for EV). His powerful and precise strikes can harm even bullet-resistant ultrahumans, and are further reinforced by impact plates worn over his knuckles.

Bloodbath is a freelance mercenary. He’s known for having been extensively involved in covert operations in Latin America.

He was hired by Malcolm Kort to capture people infected by the Theta virus. Kort’s objective was to build up his ultrahuman task force. Bloodbath was clearly the most competent operator of the lot. He was often paired with the superhumanly strong Bruut.

Along with Bruut he ran into two Exiles, Mustang and Catapult. These were clearly outmatched and failed to rescue Theta infectee Tommy Halloran. Halloran’s capture led to an Exiles raid against Kort’s corporate compound. Bloodbath was among the responders and the Exiles failed, leaving two of their own behind – Ghoul (Jonathan Martin) and Tinsel (Melissa Scott).

The callous Kort handed Tinsel to the even callouser Bloodbath as a reward. Tinsel was forced to incinerate Bloodbath’s eyes to defend herself. But the mercenary nevertheless managed to gun her down as she tried to flee.

Bloodbath was soon assassinated in turn by Ghoul to avenge Tinsel. This disaster ended with Ghoul blowing up several floors of Kort’s corporate HQ, apparently killing everyone inside.

Bloodbath is a typical 1990s US comic books badass.

A bossy sadist who is used to be in charge – and not used to have anything resist him. Due to the inexperience of the Exiles, he was a bit overconfident, but that was justified. He’s callous, brutal and domineering.

Bloodbath commands exorbitant fees. What he does with the money — beside buying guns — is unknown. All he seems to do is work.

Bloodbath especially enjoyed killing ultrahumans. He wishes to assert the superiority of his skills and training over superhuman powers.

“They call me Bloodbath. Trust me… it fits.”

Equipment:
A vast collection of weapons ; Bloodbath will often carry : 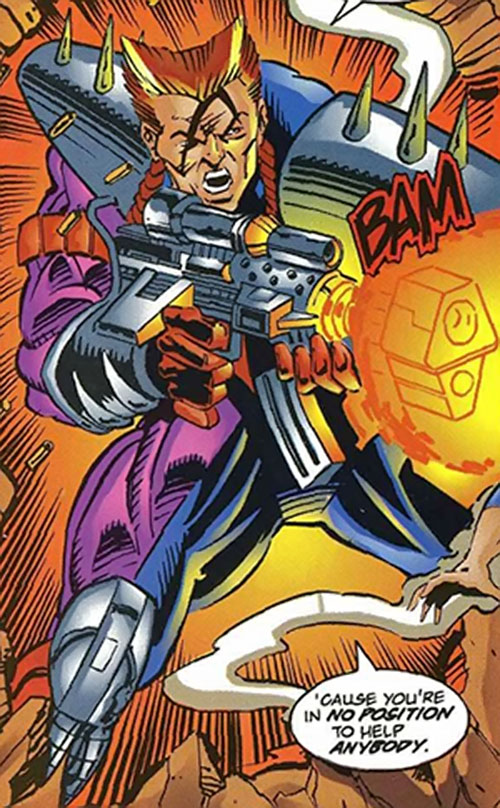