Just for giggles, I decided to post a few of my own characters. These were played in various tabletop role-playing games campaigns.

I’m currently using this one in a Marvel Classic PBeM. But I originally created him in DC Heroes 3rd edition in 1996 or so for a future-Marvel-Universe (not unlike the MC2 setting of Spider-Girl) campaign. I went into that in “Previous Stats” section.

A genetic creation of the Weapon X project, Bloodfire has the standard physical enhancements one might expect:

As a creation of Weapon X, Bloodfire presumably ought to have the standard artificially derived healing factor . But aside from his tendency not to age, he has shown no indication of it.

Bloodfire has an odd tendency to sleep sitting up and with his eyes wide open.

Bloodfire possesses the ability to generate a form of psionic  energy that thus far defies analysis. Although it affects both the mind directly and can deliver impact to a target, it is neither telepathic nor telekinetic in nature. It may be a synthesis of the two, or unrelated to either.

This psionic energy manifests as a blood-red flame, hence the name. Bloodfire also refers to it as soulfire or mindfire. This energy cannot be projected away from his body. Therefore, he must physically touch another person or object to transmit it.

On contact, the flame travels up the neural channels, seeking the paths of least resistance. It scrambles the neurons it interacts with, producing paralysis, unconsciousness, or even death.

The bloodfire cannot normally travel through any medium outside Bloodfire’s body. However, Bloodfire is able to invest the energy of the attack into an object to use it to attack at range. Usually he does so using his small, wedge-shaped throwing darts (aka flanges). But he is not restricted as to the object he uses.

A mysterious youth, discovered by X-Force roaming their new facilities on the former Avengers’ Hydrobase. Nothing is really known about him, except that he speaks English, seems to be of wildly mixed ethnic background, and that his psychic powers are formidable.

Most of what passes for his personal history, Bloodfire is unaware of except as memory fragments.

Hail to the X

Bloodfire (Kirby Jackson) is the genetic creation of the Weapon X program. This is a joint Canadian/American venture to research and create superhuman agents to carry out covert operations worldwide.

Bloodfire, designated Weapon XIII (13), was artificially aged to young adulthood. When his powers began to manifest, his artificially derived healing factor began to retard his aging. He was educated using RNA coding, sleep teaching and psychic implantation, to be a combat machine, a deadly covert agent and an assassin.

Parts of his mind were artificially closed off by Project psychics. Furthermore, the memories and synapses of several Weapon X members were used to set up a “combat computer” in the closed off section. That was to help him deal with experiences that his young mind was not prepared to cope with, as well as classified information that should not be available to his conscious mind.

Later it was discovered that these fractions of other personalities had merged to become a fully realized, separate personality. Bloodfire has come to think of it as “Slant” (for unknown reasons). According to psych-techs at Weapon X, “Slant” is actually an amalgam of Bloodfire’s own mind and the memories and experiences that were psychically implanted.

Essentially, “Slant” is Bloodfire as he will be as an adult. They feel that over time the two personalities will merge, as their development reaches parity. Oddly enough, though “Slant” possesses the tactical and strategic skill, the actual physical skills involved in fighting seem to be possessed entirely by Bloodfire.

Bloodfire has been used by Weapon X as a covert weapon for years, when he was sent on a mission that went drastically wrong. Bloodfire found himself with fragmented memories, aboard the old Avengers’ Hydrobase, being used by the (in that future) current X-Force team.

Though he’s about 14, Bloodfire is well developed and strong for his size. He has highly defined muscles and a dark complexion. His hair is very, very short, like velvet. He has many scars on his body, apparently from years of either abuse or incredibly hard physical training.

He has a bar-code tattoo on the palm and wrist of his left hand, and on the back of his neck. His eyes actually seem to glow in the dark, but they are in actuality just highly reflective of light. He has, oddly enough, pronounced, fang like canine teeth.

His costume is a blood red body suit with white harness straps to hold his weapons, and white bracers and greaves to protect his arms and legs. He wears a set of polarized goggles to protect and hide his eyes.

He often paints a red “bloodstripe” mark under his right eye. The significance of this is unknown.

The second illo is his original one, circa 1996.

Bloodfire is blunt and somewhat abrasive for a boy in his early teens. But he is what Weapon X made him: a combat, espionage and infiltration expert and an assassin.

He thinks of everything in terms of threat level and danger assessment.

Slant is easier to get along with, though having a 13-year old suddenly talking and reacting like a 30-ish adult man can be disconcerting. Slant has a number of directives he is programmed with that can also make dealing with him directly difficult.

Among others, his priorities include:

“When pain ain’t real… There is no fear. You can do anything if you’re not afraid.”

(During training excercises)
Weapon X Soldier: “Bang… you’re dead, kid.”
Bloodfire (Hits the soldier with his Paralyzing attack): “No… *you* are.”

Everybody can use a confused, mostly amnesiac government trained assassin. Bloodfire is best used as a PC, where his issues can be dealt with in-game. If not, the PC’s can have fun trying to track down his creators, or to re-educate him into normal society before he is activated and kills somebody.

Advantages:
Languages: English, Russian, Japanese, Iron Nerves, Sharp Eye, Omni-Scholar (“Slant” Only), Slowed Aging, Schtick (Paired Weapons: Bloodfire has trained to use any of his signature weapons as pairs. He throws pairs of handfuls of flanges, wields dual swords, and throws the slashers as pairs. This Schtick is double cost because it applies to more than one weapon)

Bloodfire has another “personality”, actually an intentionally fractured piece of his own psyche, which acts as a guide and as a tactical and strategic advisor. This part of his own mind was sectioned off by Weapon X psychics, and is used to filter classified information, combat tactics, and other information that Bloodfire’s 13-year-old mind is not yet prepared to cope with.

This personality, which Bloodfire has come to think of as “Slant” (for unknown reasons), is a version of him as an adult, with full education and knowledge of his own memories. For game purposes, there is no difference in their mental Stats or HP, just in their knowledge and outlook. However, when the alternate personality is in place, it has access to none of Bloodfire’s Fighting or Weapon related talents.

Also, while Bloodfire is functionally Illiterate, Slant is not. Bloodfire has a distinctly abrasive personality, tending toward being very blunt and with no tact. Slant is able to take over and speak for them if he sees fit (and without the Socially Inept Drawback), but Bloodfire will almost always resist being subsumed in this manner.

Also, while Slant is in control of their body, he does not have access to Bloodfire’s Martial Arts or Weaponry Skills, nor any Combat-related Advantage, unless he makes use of his Omni-Scholar Advantage, which equates to him accessing their programmed database of expertise.

Stats have not changed over the past ten years since his creation, but his background has changed with every game I have intended to play him in. Bloodfire has been used in only one, online PBeM game, for which he was extensively modified in background to fit.

Originally, he was created for a future-era Marvel Universe-based tabletop RPG, where he was intended to be the son of Wolverine and Jean Grey.

In the current MSH-X2K game, he was retconned to be Wolverine’s genetically altered clone. However, this was before I became aware of X-23. Fortunately, none of his background was revealed with the exception of his origin at Weapon X. I’ve since made him a simple genetic creation, with his parentage unknown, it being simpler to leave it up to the GM.

The PBeM ws in the Marvel Classic RPG. I found it instructive to convert his game stats to DCH, as it makes it a lot more clear what he can and cannot do.

Source of Character: Homebrew character from the X-Force MSH-X2K PBeM . 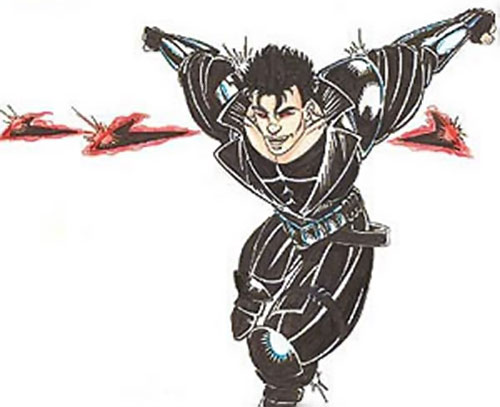