Bloodhawk was a member of the X-Men 2099, which were part of the Marvel 2099 possible future. This cyberpunk  sci-fi setting endured from 1993 to 1998, and though it wasn’t always the best it had many interesting bits and characters.

Bloodhawk was perhaps the most underused and at the same time the most stable of the X-Men 2099 characters. His stats shown here work for his entire run of appearances.

Bloodhawk can transform from a standard human form into a scaly, lizard like humanoid form. This form:

Even his “base human” form is surprisingly tough. He proved able to actively resist the neural restraints used on him by the Nevada Syndicate. These reduce most to helpless, drooling morons.

The only history we have for Bloodhawk is what was stolen from his mind by La Lunatica in the Theatre of Pain’s Darkroom facility. At the age of 14 he experienced his first transformation while being experimented on by unnamed scientists. These were possibly in the employ of the Theatre of Pain… their M.O. was similar.

His transformed body’s toughness and strength allowed him to escape. Halcon took to living in the Southwestern Desert of the U.S., around the old Gamma Base, where he could survive but others could not.

Eventually he took up the cause of the Earth. As an eco-terrorist he used his flying, survival skills, and weapons caches from Gamma Base to carry out a one-man guerrilla war. He struck at the developers and corporate interests who were intent on defiling what Bloodhawk saw as his land.

Eventually he became enough of a thorn in the side of the Nevada Syndicate, which ran Las Vegas. They put a contract on Bloodhawk. The militant mutant was scheduled to be executed in public as a warning to others. However, he was rescued by Meanstreak and Krystalin, under orders from Xi’an Chi Xan, the leader of the new iteration of the X-Men.

Meanstreak and Krystalin extended Xi’an’s invitation to join. But Bloodhawk refused, preferring to continue his war against the Nevada Syndicate. Halcon was more specifically after Noah Synge, who had sentenced him to death.

Later on, Synge Security attacked Nuevo del Sol, the abandoned arcology that Xi’an and his crew were making their temporary base. That was in retaliation for the alleged assassination of Noah Synge at Xi’an’s hands. Bloodhawk returned and assisted the new X-Men in escaping. He destroyed several tanks using well-placed grenade diving attacks.

Hail to the X

He then led the X-Men to the abandoned Hoover Dam to hide. Meanwhile Xi’an, who had been mortally wounded by one of Synge’s assassins just prior to the attack, healed himself. Furthermore Meanstreak, Krystalin, and Metalhead returned to Synge’s complex to seek evidence that would clear Xi’an.

That was not to be, though. Junkpile, one of Xi’an’s former partners in the Lawless outlaw gang was the one who had betrayed Xi’an to Noah Synge’s son Lytton. Junkpile led security forces to the Dam and singlehandedly overcame the remaining X-Men Cerebra, Skullfire, and Sepentina, and took Xi’an’s body back to the Synge casino. 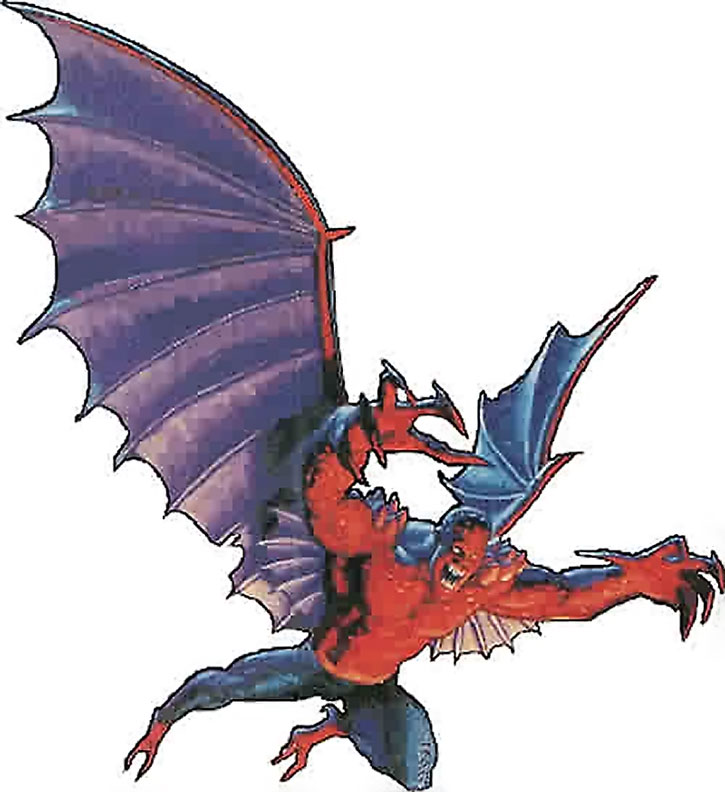 The remaining X-Men regrouped, and with Bloodhawk’s help infiltrated the casino. They freed their other companions who had been captured while obtaining evidence that showed that Lytton Synge had killed his own father and tried to framed Xi”An. Then they stormed the Medcenter to try and retrieve Xi’an.

They fought Junkpile to a standstill, but not without casualties. Bloodhawk’s wings were broken, and Serpentina was killed. Then Xi’an, fully recovered, took a hand and brought Junkpile down. Desdemona Synge, Lytton’s sister, had already discovered on her own that Lytton had her father killed. She arrested him and let the X-Men depart peaceably.

After the X-men had buried their dead, Xi’an again invited Bloodhawk to remain with them. But Halcon refused, saying he felt his responsibility to the desert was too strong to permit him to stay. Still, he offered to help when he was needed.

That set the tone for the rest of Bloodhawk’s tenure with the X-Men 2099. He took part in a few adventures, generally showing up when needed but least expected. He also had at least one adventure on his own in the Savage Land. I lack details on that one… figures it would be the one issue I missed.

He was also there to help against Brimstone Love and the Theatre of Pain.

Further adventures occurred in 2099: World of Tomorrow, but I lack details there, as well.

Big, red-skinned and scaly lizard-like humanoid with draconic wings and TEETH. Although he has a normal human form (tall, lean and muscular, not bad-looking), Bloodhawk spends all his time in his transformed state.

Bloodhawk’s legs were slightly digitigrade, and his feet looked as though they should be prehensile. But that was never demonstrated.

Bloodhawk is a Protector of the Southwestern desert (an eco-terrorist to some) that strikes at all who would deface the environment, especially the desert.

He never wanted to join the X-men but has found acceptance there. He still sees himself as a loner, but had a strong ability to work as a team member, using his special areas of expertise to support his team.

“I know of Xi’an and his Gatherings… He dreams of humanity. I dream of the Earth. Tell Xi’an I will not become another of his disciples. I owe you nothing.”

Bonuses and Limitations:
Sealed Systems: Effective vs Radiation Only.

Bonuses and Limitations:
Bloodhawk has only demonstrated use of the Stealth Subskill while in Flight.

Drawbacks:
MIA (Protect the Earth), SIA (Fight Corporate Domination), Mistrust, Strange Appearance, Loss Vulnerability: Bloodhawk has No Powers, and his Str drops to 3 if he is forced to resume his human form. This happens automatically if his powers are Neutralized, but he can be knocked unconscious without losing his Powered Form.

Bloodhawk is an expert in guerrilla tactics and in overcoming large numbers of well armed foes, especially in vehicles. Typically when facing large numbers, Bloodhawk will remain airborne, where he is virtually impossible to hit, first attacking any flyers or flying vehicles to quickly disable them, then concentrate on ground targets.

If supplying air cover for his teammates, he will attack the most threatening targets first, using Hero Points  as necessary.

Bloodhawk seems to have a virtually inexhaustible supply of military-grade weaponry, especially grenades. In DC Heroes RPG terms his Shtick: Weapons Cache covers his ability to resupply his stores when needed. Bloodhawk also seems to be able to destroy nearly any target, up to and including large armored tanks (which presumably have Hardened Defenses) with single, well-placed grenades.

His Shtick: Grenades of Doom covers this by allowing him to spend HP to enhance their effectiveness. (see New Rules for details on these Shticks)

In Hand to Hand combat, Bloodhawk will typically strike with his powerful wings rather than engage in standard fisticuffs or use his claws. 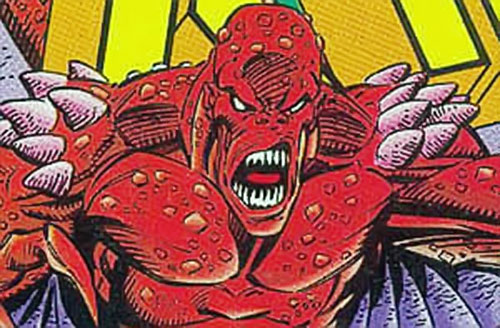 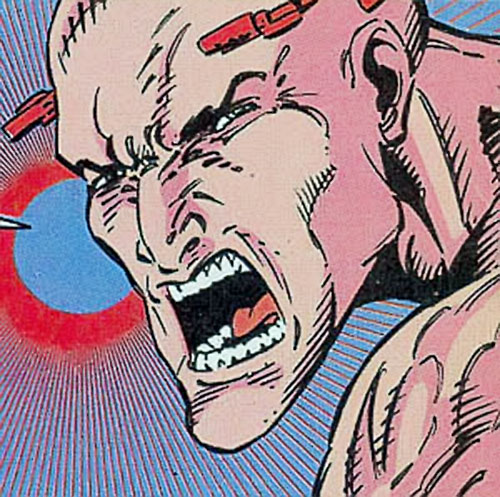 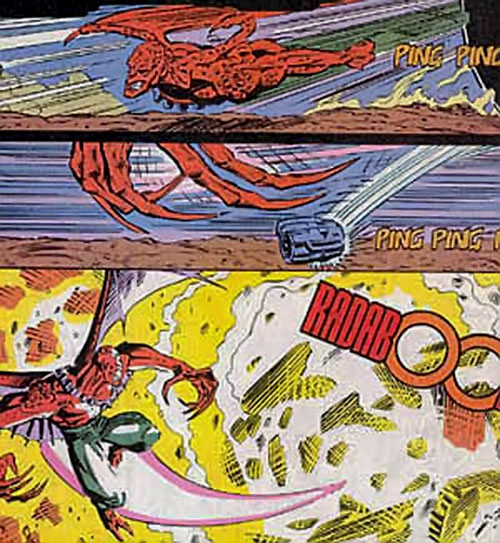 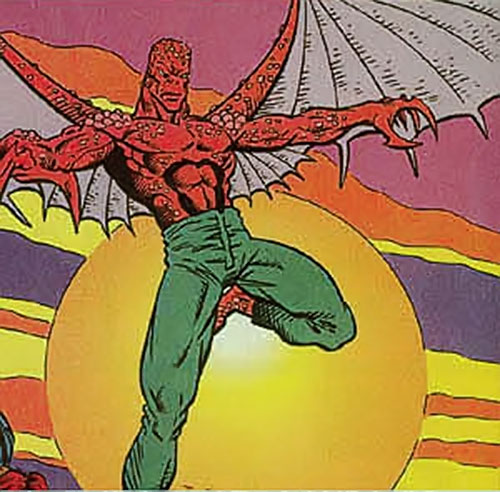