He’s tied to some of the core organisations of the early Wildstorm Universe.

Bloodmoon’s exposure to the Genesis drug, along the addiction, made him stronger and smarter than he was after enduring Team 7’s training.

He also gained some animalistic features like claws and fangs.

He has strong charismatic abilities as he united the tribal kindred in following his crusade. He still retains a strong special ops training.

Robert Diaz was Team 7 material. But before Craven exposed them to the gen-factor, he was left KIA after an operation in South America. Mainly because Slayton, who was in charge, short on time, and didn’t want his dead body to slow them even more. That’s where his grudge against Team 7 comes from.

As he was not dead, he ultimately awoke on Caballito Island, surrounded by the Kindred. They allowed him to live. While exploring the island, and the former IO’s research center, he found vials of the serum the scientist had been testing on their animal subjects (thus creating the Kindred).

Since the scientists’ journal identified it as a Team 7 serum, and safe, Diaz took it. He became immediately addicted, while his body and mind experienced great enhancements.

I want a new drug

His new found strength and his military training allowed him to impose himself as leader of the Kindred. He unified them in the pursuit of his personal vengeance against IO. As they were victims of IO’s experiments, too, they were more than eager to comply.

He abducted Lynch in IO’s headquarter, no less, taking Alicia Turner with him as a bonus. He brought them back to Caballito for his people to witness his trial and execution.

His trouble first came from Backlash, who made a deal with IO. If he agreed in leading a rescue party, they would give him the information he required on the Daemonites who put his girlfriend in coma.

More trouble came from Grifter, warned of Alicia’a abduction. As he owed his life to her, he couldn’t let it go and secretly joined IO’s party.

In the final confrontation between Bloodmoon and his Kindred and Lynch, Backlash, Grifter and the survivors of the rescue party (not many), Robert Diaz fell to his death from a rope bridge. In spite of Grifter’s decision to save him, Slayton, once again, let Diaz go to save the rest of the party.

Bloodmoon is a tall, strong Latino American. He dress in a crimson and brown outfit, topped with a partial armor and helmet made of bones.

From his original personality, not much is left. He now only desires to assume his vengeance against his former Team 7 teammates.

His recent addiction to IO’s drug is just another point on Lynch’s tab.

He doesn’t show much consideration to his men. Though claiming to belonging with them, he easily expends them in suicide missions. 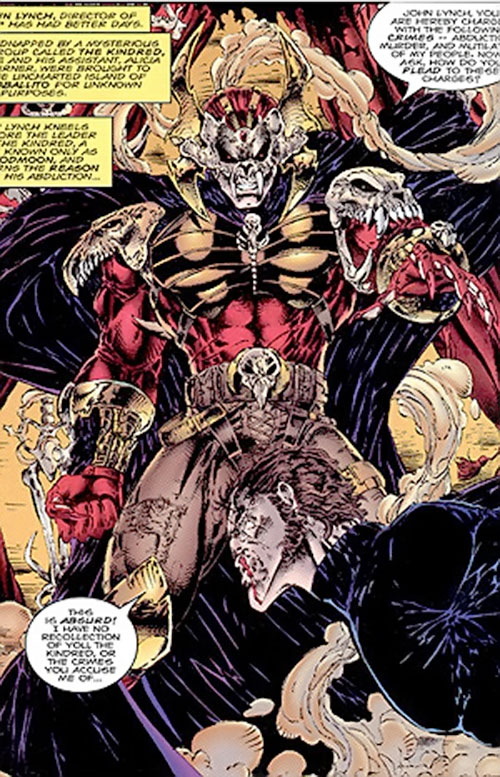 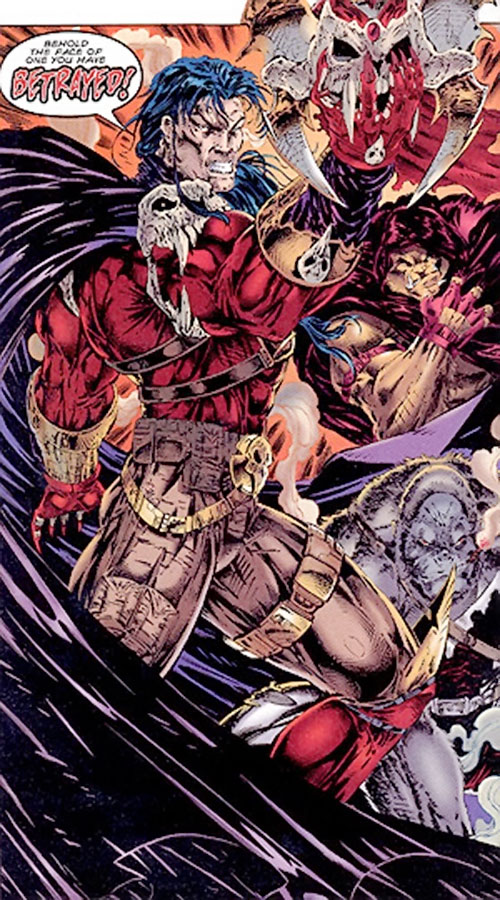 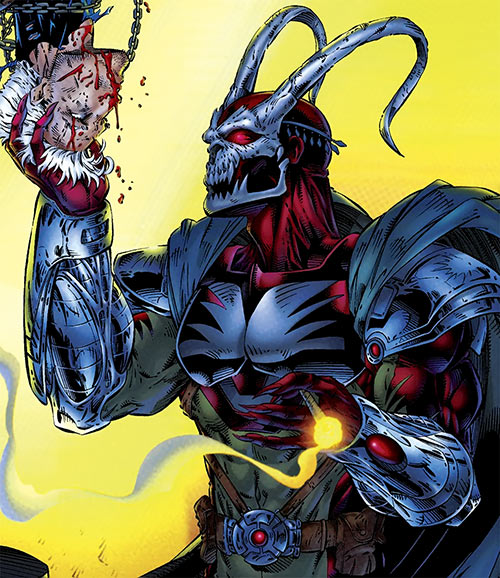