Bloodshed is a superhumanly robust kung fu fighter and swordsman.

Bloodshed grew up in the Golden Triangle . His parents were opium farmers and addicts, using it in their food, drink and smokes. An addict at five, he saw the dead end of the road he was on by age ten. So he went to work for the local drug lord.

The lord gave him menial tasks, but he was a cruel master and Bloodshed began to hate him. The guards trained the boy in the martial arts, since they also hated their lord. And when he was 16, they gave him a sword. He knew who it was meant for. But with the drug lord’s death, Bloodshed became an easy scapegoat for the new bosses. He ran to Hong Kong.

He met there with brothers of the Dragon Fang and soon became a soldier in their growing army. Five years later he earned the rank of ultra-powered assassin.

Along with Black Tiger and Incoming, he encountered the Solution for the first time while protecting an heroin shipment. This when Bloodshed discovered that Dropkick was very skilled in the martial arts. They lost badly.

Bloodshed trained hard, his soul burning for revenge. They encountered the Solution again when the mercenary group fell into a trap. Although they almost managed to kill the Solution, they ultimately lost again.

“Come out, you cowards ! Show yourselves to the one who will kill you !”

No prob. Good low-powered muscle for the Asian theater.

Revenge of the Dragon Fang

The three main enforcers for the Dragon Fang triad (Incoming, Black Tiger, Bloodshed) were badly beaten during their first encounter with the Solution. They lusted for revenge, and trained hard to improve themselves.

Bloodshed also raised his Martial Artist score to a 08 during this time, and gained the Lightning Reflexes advantage. 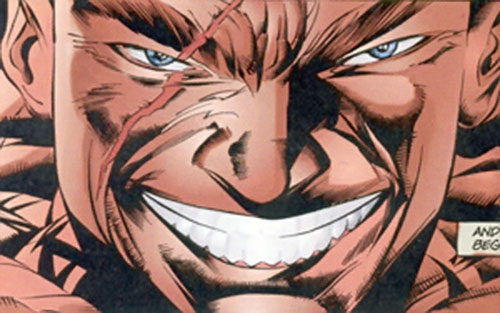