Bloodtype is a huge and extremely strong man with remarkable combat abilities. He likely has superhuman strength, which seemed to be his main asset as Mister America II.

This allows him to wear an armoured costume with machineguns and flame throwers in the bracers, and a heavy helmet bristling with electronics.

Bloodtype was formerly the hero known as Mister America II, apparently a superstrong patriotic type. While he was married to his crime-fighting partner, Liberty Lass, they did not know each other’s secret identity. The press just loved this.

Mister America and Liberty Lass eventually moved to the city of Vanity, in Oregon. In this desperate city, the two strong and positive heroes gave a little hope to the population for a while.

But such a situation cannot last for long in Vanity. What happened is unspecified, as people tend to just refer to it as “the accident”. Both Mister America and Liberty Lass apparently suffered considerable physical and psychological damage.

Liberty Lass had to be surgically reconstructed by the CIA using artificial plastic skin. She eventually became Death Doll, a jackal for the Agency.

He had become a brutal gunman who did not care about collateral damage and routinely slaughtered criminals. In dysfunctional Vanity, this is what kept the mobs in check. Bloodtype’s actions terrified minor super-criminals.

In 1996, has-been costumed criminal the Piper was forced out of retirement when his daughter was kidnapped. Bloodtype confronted him in the bank he was robbing. The thoroughly out-of-shape and demoralized Piper was slaughtered. But that was not the crux of the plan.

One of Piper’s strange pipe-homonculi had been replaced by one loaded with potent explosive. While Bloodtype was fighting with the new hero Aztek, who disapproved of his methods, the bomb went off near a ruptured gas main.

Bloodtype lost much of his right leg in the carnage. He died within minutes of reaching the hospital.

As expected, this triggered a crime explosion in the city. The threat of Bloodtype was gone and numerous criminals saw their big chance, which contributed to overwhelming the police. The gang bosses carefully monitored the situation, making sure they stayed on top and remained on top of the heat they had created and prepared for.

Minor Vanity supercriminals, many of them previously wounded by Bloodtype, came to his funeral. While most made a big show of this being honour and respect among criminals, they actually wanted to make sure he was dead, since they were so afraid of him.

Blaming Aztek, the damaged and distraught Death Doll tried to avenge him. But she was betrayed by a henchman and seemingly accidentally killed in the attempt. This marked the bloody end for what had been a loving couple of positive, courageous super-heroes wrecked by Vanity.

As Mister America II, he dressed like a gentleman from the Revolutionary era.

Bloodtype wears some form of bandages around the top of his helmet, which may hint at the major physical damage suffered during “the accident”.

Your typical 1990s gun-toting vigilante. He’s devoid of hesitation or pity and motivated more by his hatred of criminals than by any sort of care toward innocents.

He is known to torture some of his opponents, likely to pry information out of them, and seems to run on anger and brutality.

“I don’t know what sorry bargain basement you and your jerks ’r’ us pals crept out from. But playtime’s over !”

Piper: “God help me, I’m a human being !”
Bloodtype: “Wrong. You’re a pig. You’re criminal scum. And there’s a question I always ask criminal scum like you…” [lowers his weapon] “What’s your blood type ? Scum.”

“Oh yeah, I might graze my knuckles on your face. Stop trying to play with the big kids, sonny !” 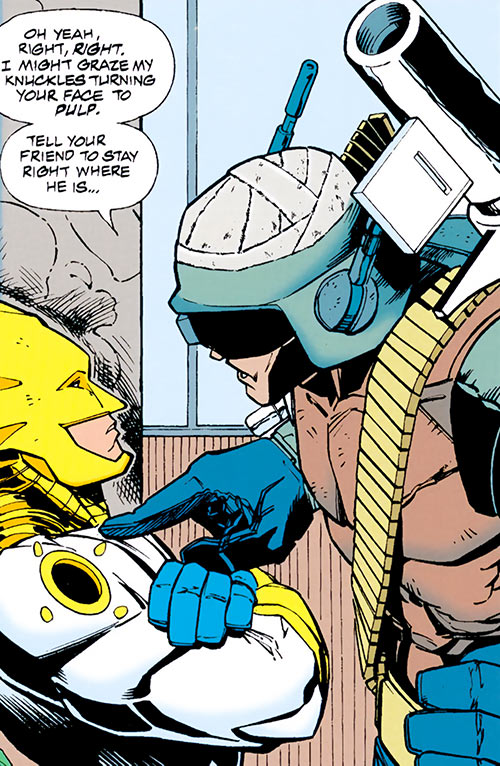 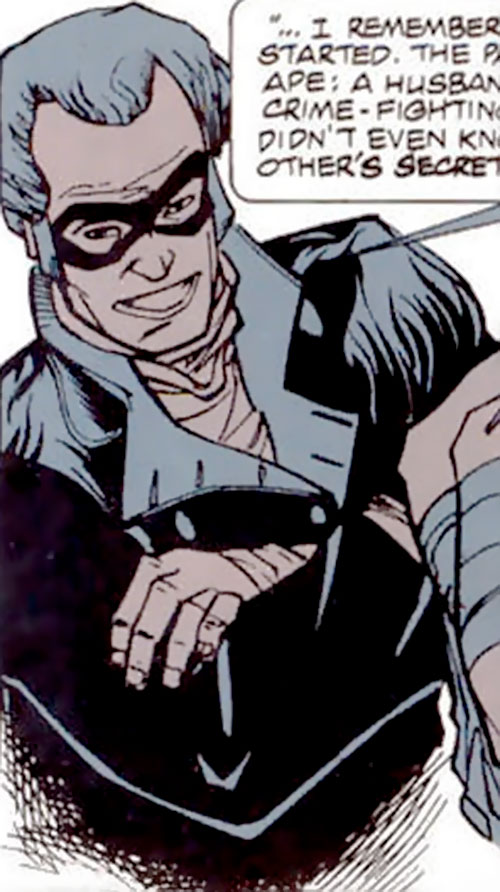