All illustrations are excerpts of artwork by Jackson TJOTA on Deviantart (http://tjota.deviantart.com/gallery/24250806 ), whose work also provided inspiration to finalise the character. Reproduced with permission.

Blossom, like her sisters, possess nearly Kryptonian  level powers. And it is likely that she still hasn’t hit her full power.

She has possessed her powers since the moment of her “birth” at the physical age of 5, and has been using them as a hero ever since. So her experience is vastly greater than one would normally expect. That she has been working in concert with her sisters for most of that time as well means that the three of them are vastly more effective together.

Blossom is also extremely skilled and knowledgeable in a variety of areas. She is an accomplished gadgeteer  and scientist, particularly, in the areas of Kree Tech, Holography, and Metahuman Genetics.

She is currently pursuing a doctorate in Genetics. She has already earned a Wilder Fellowship, and a position at the Wilder Research Institute in New Coast City, which grants her complete freedom of research, and lifetime salary.

What Are Little Girls Made Of?

In 1994, in the Counter Earth city of Townsville, a scientist named Professor Herbert Utonium was conducting an experiment in genetic engineering. This was the latest in a series of experiments, a previous one was now his lab assistant, an enhanced chimpanzee named Jojo.

Jojo was quite smart, though not yet capable of speech, and was secretly quite resentful towards the professor. Utonium was attempting to clone healthy embryos from the DNA of people carrying genetic illnesses. He had three viable embyos and was watching their progress nervously.

Jojo decided to enact a plan of his own, feeding a Terrigen Gas derivative into the embryos and himself. He didn’t expect an explosion.

When Utonium regained consciousness he found 3, apparently 4 or 5 year old girls standing over him. When they saw his eyes open they immediately began talking, asking him if he was alright, and who he was.

Piecing together what happened by the evidence in the lab he came to the conclusion that the Terrigen Derivative had caused the spontaneous growth and maturity to the “former” embryos. He decided to raise the girls, and named them, then got a further shock when the girls began demonstrating superhuman powers.

The girls, now named Blossom, Bubbles, and Buttercup, were soon enrolled in a local pre-school, with a teacher named Ms. Keene. Though things went well for a few days, the girls forgot to keep their powers in check at school and let a game of “Tag” get far out of hand, causing significant damage to the school and the city.

The next day, as the girls were waking up, SHIELD CE agents came bursting through the front door. Taking Utonium into custody, they moved towards the girls who fled in fear.

The girls quickly got lost in the city and quite scared. Thinking they had to keep their powers hidden they had no idea how to deal with any part of this situation. It was at this point that Utonium’s former lab assistant Jojo, approached them.

Now capable of speaking, and having opposable thumbs, he completely fooled the very naïve girls. He soon had them convinced to help him “show everyone how special they are”. Directing the girls in the use of their powers he had them construct his headquarters.

Quite pleased with himself Jojo sent the girls out for the materials he needed for his plans. When the girls spotted their house from the air the next morning, as Jojo was putting his plan into motion downtown, they decided to see if the Professor was there. 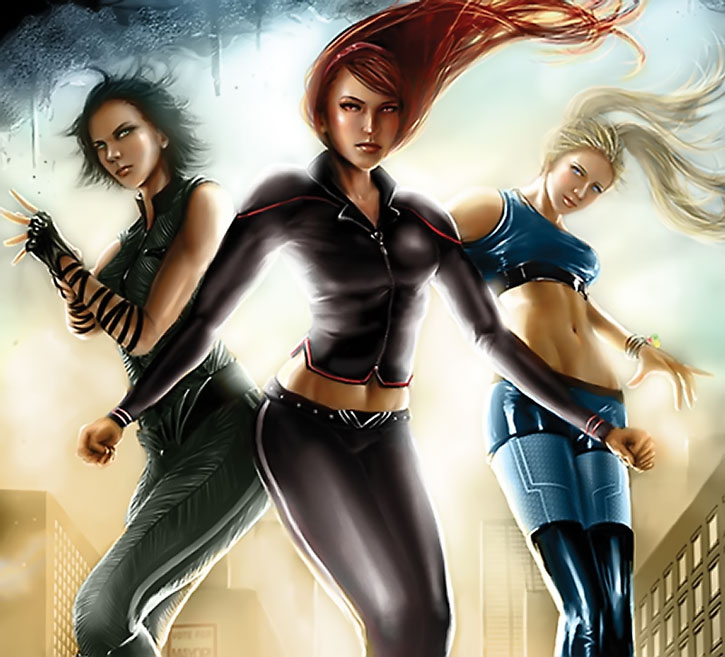 Full version of the art here.

Utonium was in fact home, and had been searching for the girls for several days, as was SHIELD. The girls were so excited to see him, and believed completely that they had been doing something good, they gave him barely a moment to talk and whisked him away to see what they had done.

When they arrived and saw Jojo, now proclaiming himself “Mojo Jojo”, and saw what his plan actually was, they were horrified, still having no frame of reference or world experience they ran again. Taking off into space the 3 toddlers huddled on an asteroid and argued with each other.

Then Bubbles, who had been wishing very hard to be home, suddenly found she could hear what was happening in Townsville. As she heard it, and her sisters heard it through her thoughts, they heard the Professor’s voice. Streaking back to Townsville, the girls wanted to find the Professor but were continually distracted by saving innocent people from Mojo’s army of mutant apes.

It was Buttercup who first found the answer when, driven to anger and frustrated by having to repeatedly rescue the same dog, she lashed out physically at one of the apes. While Buttercup was initially overcome with remorse, Blossom realized it was the answer and demonstrated.

Quickly routing the ape army the girls confronted Mojo Jojo and defeated him. The people of Townsville were extremely grateful to the girls, and had they talked to the Professor earlier they would have learned that they weren’t in any trouble.

The SHIELD agents who burst in to their home had been subject to a severe dressing down by their commander Director Cecil Steadman (for CE) for the way they proceeded as that had not been his intent.

The girls were soon living as normal a life as possible. They attended school, had a set bedtime, and so on, but they also protected the city, using their powers against criminals, and supervillains. Cecil gave the Professor a suit of Guardsman armor for emergencies and he sometimes used it to help the girls, and for training.

They also installed a holographic training room in the lab, which also got upgraded, since Utonium was now employed by Steadman.

Bubbles started travelling around the world of Counter Earth. Buttercup went even farther, travelling all the way to Earth and the nation of Themyscira to learn from the fighting masters of the Amazons.

Time passed, and even the Professor wasn’t sure where the other 2 girls were anymore, when the unthinkable happened. Townsville’s longtime Mayor was killed during one of Mojo’s attacks in 2008. While Deputy Mayor Sarah Bellum assumed the office of Mayor, and Blossom began blaming herself.

Bellum surprised everyone by contacting both Bubbles and Buttercup and bringing them home for the Mayor’s memorial. The reunion was not pleasant for the girls, who had some long term misunderstandings, and even degenerated to an open brawl between the 3.

While they fought Mojo Jojo again attacked the city, this time using another villain newly equipped with a robotic suit. When the girls stopped their fight to defeat the threat, Mojo attacked them and seemed on the verge of finally winning, before the girls put aside their differences and became the team they were before. Bubbles and Buttercup moved back to Townsville and the girls started working together again.

Things went well for several years until 2011 when the “Roudyruff Boys”, a trio of clones Mojo had created years before with powers similar to those of the girls, returned. The boys, now young men, had only gotten more evil during the years they had been missing, and now they wanted to conquer the planet and hand it over to the Viltrumites.

The girls had never faced a battle like this before, and were pushed to the limits of their abilities, and they very nearly lost.

Triumphing over the boys, Blossom, Bubbles, and Buttercup, have re-dedicated their lives to fighting crime, and the forces of evil.

Blossom is a fairly tall auburn haired beauty who dresses rather conservatively, some of her clothes seem to be in Victorian styles, and others more modern.

Blossom is a serious girl, she is much like Dr. Temperance Brennan on Bones, and can seem completely alien to some people. Despite this she is very well liked, especially in the area of Townsville, and she sometimes has difficulty handling it.

She is known to react with exceptional violence towards those who harm or endanger children, and she is incredibly serious about her “responsibility” as a hero.

[In unison with her sisters] “Not so fast (insert name of villain) !”

Equipment:
She doesn’t really use much on a regular basis but she has a number of things at her HQ that she can use when needed, just go for the kinds of things Superman could pull out of the Fortress of Solitude during the 1990’s.

Blossom probably owns a starship of some sort, has access to an advanced laboratory, and can build new gadgets as she needs to.

Source of Character: Originally created by Craig McCracken for Cartoon Network, this version is designed for Universe AZ. 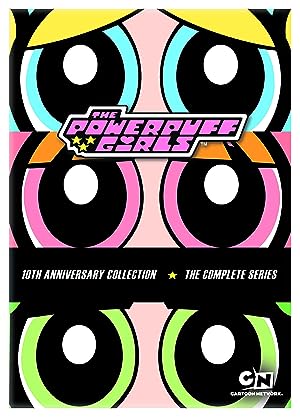 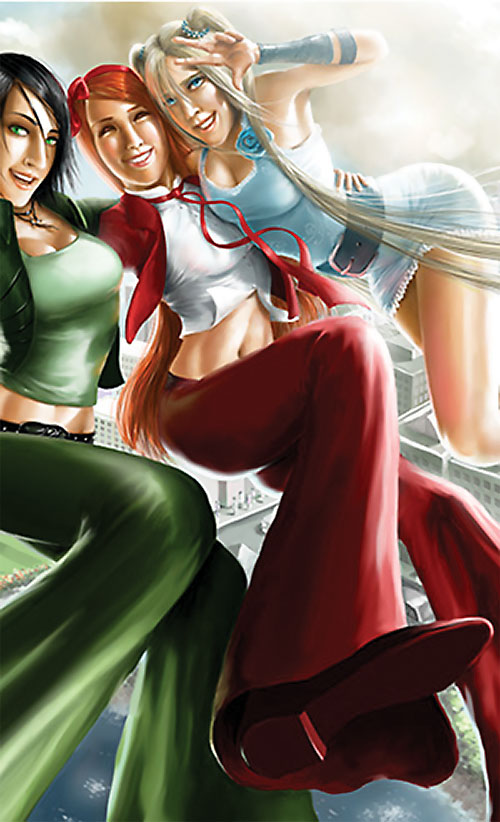