Blue Blaze is an early Marvel Comics character – or rather Timely Comics, since he appeared in March of 1940 (cover date). Though he was interesting, he had but a few 1940 stories then vanished into Comics Limbo .

He’s a good example of the Spooky Preternatural Avenger archetype. This is an evolution of Grim Avengers of the Night characters (like the Shadow or the Spider) with the addition of horror elements. Contemporaries include the Spectre, Fantomah (yay !) or the Eye, and this line would eventually lead to the likes of the Ghost Rider.

He’d be trivial to bring back and modernise.

The resurrected Blue Blaze is a two-fisted action hero with the strength of a thousand men. He can pretty much ignore gunfire from small arms, even at point blank range. His strength and hardness make him able to excavate with his bare hands at a quick pace — or to swim quickly in the roughest waters.

Somehow, the Blaze can turn flames he’s exposed to into something reminiscent of the blue fire that killed and empowered him. He can temporarily derive even greater strength from such exposure.

His presence is so terrible that some men he has Intimidated have died from heart attacks (in DC Heroes RPG terms, Magic blast), though that takes a good roll.

One of his strangest powers is that his grave mysteriously appears near some source of great evil whenever he returns to his coffin.

Like his father, Keen is a brilliant and well-trained scientist, with a strong deductive mind.

In one issue the Blue Blaze was using a super-charged speedster and a secret mountain base with a lab. Then the original writer returned and the Blaze was retconned  to having his grave mystically move around.

The second version being more memorable, I have gone with the retcon. This means small changes in the History section below to align with that – replacing the roadster and lab with the grave in the narration.

Doctor Keen, of Midwest College, was a hardy soul dedicated to the advancement of science. However, one of his strangest inventions disturbed even him.

An odd concoction of chemicals in a lab bottle was producing a strange, blue flame with extraordinary properties. Mice killed by the flame would revive months later, stronger than ever. Likewise, insects charred by this flame would come back to live many times their normal lifespan.

By 1852, Keen had nearly made his decision to destroy this blue blaze. Looking for a second opinion, he asked his thoughts to his son Spencer. At that point the younger Keen was leaving to attend a costume ball, dressed in an ominous Phantom-like blue costume.

However, as Doctor Keen was explaining his experiments, a sudden and unusually powerful tornado swept over the Midwest College campus. The natural disaster utterly razed the university – 85% of the surrounding population was killed, including the Keens.

To prevent diseases, the corpses were buried in a hurry, without having their clothes changed or receiving the care of a mortician.

For Spencer Keen, however, it was not the end — but a new beginning ! When the tornado struck, the blue blaze hit him in the face, killing him before the twister could. In his coffin, he hibernated as his strength grew a thousandfold and he became invulnerable.

“Substrata dermatic rays” also made him conscious of the “growing domination of evil” in the world during the intervening decades. Whatever that may mean.

Vengeance from beyond the grave

In 1940, 88 years after his burial, Keen burst from his grave. He was haunted with a single-minded dedication — to bring justice to the world, and fight evil with his supernatural might ! What finally brought him back was two grave robbers digging near his resting place.

The Blue Blaze erupted from the ground and impassively withstood the gunfire of the two criminals. One of them died of a heart attack and the other spilled the name of his leader — the dreaded professor Maluski !

Investigating, the Blue Blaze discovered more hapless thugs and an eerie, gigantic underground base full of poison and germ laboratories. Using his colossal resources, Maluski planned to murder, bomb, destroy and wreck civilization as the surface world knew it ! He would then rule over the ruins using his armies of animated corpses to man his machines !

After listening to the evil, psychotic genius rant for a while, the Blue Blaze destroyed everything. he then left Maluski to apparently perish at the hands of the zombies. The Blaze swam back to the surface as explosions rocked the expansive base.

The Blue Blaze then returned to his grave. But he was awakened when a mysterious explosion occurred at the American Anthracite Company.

Emerging from his coffin, which had mysteriously moved to a patch of soil near the mines of the Company, the Blue Blaze found that he was too late to help the miners.  But he noticed an odd metallic fragment in the mine, which he swiftly deduced was a bomb casing.

In short order, the Blue Blaze defeated a machination by mad conspirator Barko. Barko wanted to blow up another mineshaft so he could sell his revolutionary safety system to the inimical mine managers.

Over the following months, the Blue Blaze inflicted many defeats upon the sinister enemies of society. Eventually Doctor Gair, the brilliant head of the crime syndicate, turned to a sinister and heavily racially caricatured Jewish astronomer to conjure forces from another world. These would stop the Blue Blaze’s crusade against crime.

They summoned an invulnerable, super-strong golem-like creature from the stars. But the Blue Blaze had gotten wise to them and burst in, his grave having again moved close to his enemies.

While the Blaze was defeated by the star-child, he wasn’t killed. Soon, the powerful scientific mind of the Blue Blaze deduced that the creature was powerless during the day. That was its home star only shone upon the Northern hemisphere at night. The Blue Blaze also discovered its weakness.

The following night, the mysterious star creature found and chased him. But the Blue Blaze led it to a printing plant where he poured molten lead on the golem. This cut it off from the rays of its star and rendering it powerless.

The Blue Blaze dragged the two villains to their lab so they would show him how they conjured the creature. But they tried to kill him using the filtered rays from the star. The Blue Blaze produced a mirror, reflecting the rays upon the villains and slaying them.

Tales of the two-fisted dead man

The Blue Blaze next surfaced (quite literally) in the Balkans, near the so-called Hall of Horrors. Making one of his trademark eerie appearances, he emerged from the pool of caustic lime where the hangman of the Hall was disposing of corpses.

The hangman died of a heart attack. The Blue Blaze then proceeded toward a meeting of the masters of the Hall of Horrors – the Trustees of Hate ! On his way, he intercepted an agent of the Trustees. But another agent, the beautiful Lara, killed her colleague before he could talk.

Taking the Blue Blaze as her prisoner, she drove him to the scene of the next plan by the Trustees. It involved shining a hate ray on the representatives of two Balkan nations during a diplomatic congress. This was bound to trigger an international crisis. Then, as war was brewing, Lara took the still impassive Blaze back to the Hall of Horrors.

There, our hero finally made his move and escaped, investigating the base.

Haunting the Hall of Horrors

One of the Trustees, doctor Vortex, realised that he was facing the Blue Blaze. He sacrificed his lab and henchmen by triggering powerful explosives. This knocked the Blue Blaze unconscious.

Vortex had the Blaze chained. He then offered him a last cigarette. But the Blue Blaze turned the flame of the lighter into a strange cyan-coloured radiance, burst free from the chains, grabbed Vortex and jumped out of the castle — right into the caustic lime pits ! The Blaze left Vortex to die an horrible death while he regained his grave !

Although the next issue caption promised that the Blue Blaze would next fight the Vampire of Doom, he never appeared again. So far.

However, if he truly is gravitating toward the strongest evil within 25 APs, he likely spent the last seven decades in dirt-poor and dysfunctional countries nobody important cares about.

The Blue Blaze is an eerie avenger, almost inhuman in his stone-cold determination to vanquish evil.

He is impassive, very analytical, terribly driven and highly efficient, with a clear aura of taciturn badassness.

Like most Golden Age  heroes, it is OK for him to kill. As long as he doesn’t do it very directly and/or the villains perish due to their own evil machinations, such as Dr. Vortex in the lime.

He tends to stand around impassively as the villain (or his henchmen) demonstrates the big master plan — and only then act.

“I have my own ideas about that — one peep out of you and I’ll ram this fist down your throat.”

“I came prepared for something like that — with a mirror !”

Drawbacks:
Distinct Appearance (unsettling vibe, blue flashes of flame bursting from his body when he strains himself).

Equipment:
The Blue Blaze carries a Zippo-style lighter in his belt buckle.

By Sébastien Andrivet and Sean MacDonald. 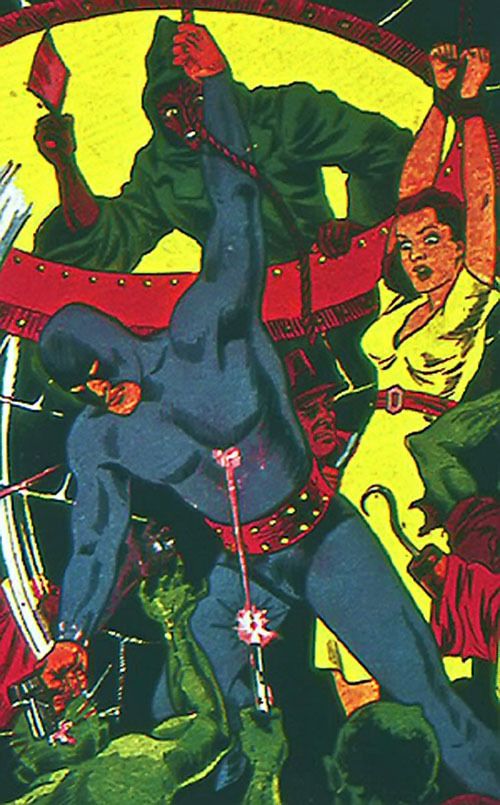