A strong, fit man, James Dore is trained as a special operative for the government, a hero and a aircraft mechanic. He’s a highly skilled fighter, specializing in aerial combat.

He wears a specially designed flying suit. Although the suit is not armored to a significant degree, it includes artificial wings enabling flight and a helmet with several aerial navigation features. The Eagle also wields an American eagle-shaped shield.

Though it’s not part of his standard equipment, the Eagle sometimes arms himself with a stout medieval weapon. He usually uses a mace.

The winged member of the Squadron Supreme went through several rounds of important changes before the landmark Squadron Supreme Gruenwald series. Yet, he is generally assumed to be James Dore, Jr. in all appearances.

Since Earth-712 is a sort of loose parallel of the DC Universe, one possible explanation is that it regularly goes through editorially-mandated, reality-redefining crises. In this No-Prize Hypothesis , Dore was retconned  into a different character each time. For those GMs wanting to use the older versions, here are our notes :

The American Eagle is rabidly, obsessively anti-Communist. Anything that even vaguely opposes him will be denounced as a Commie, a radical and a traitor, with the likely exceptions of inanimate objects and the weather. He seems paranoid and impulsive.

He wears the red costume with the star-studded briefs and the eagle head hat. It is fairly close to the one that Steve Trevor wore as the Patriot. 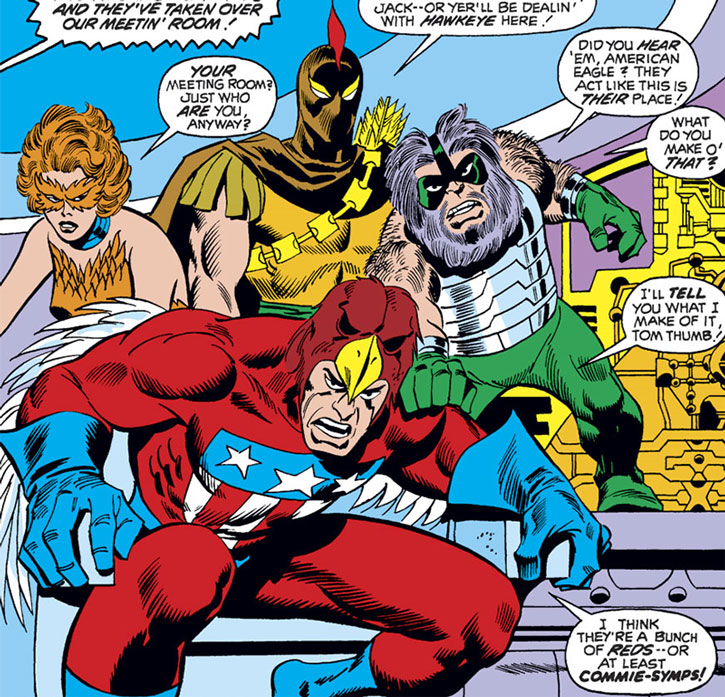 This version of Dore is a large, powerful man. He seemed to be about 6’4” and 235 lbs. In DC Heroes terms it isn’t impossible that his STR was a 05 during this era.

His wings are not capable of flight per se but he can glide. He often uses them for lunging or dive-bombing attacks with his mighty all-American fists — in DC Heroes terms they’re WINGS [BODY 05, Jumping (Winged): 02, Gliding (Winged): 04]. He probably had 30-ish Hero Points at this stage.

Quote: (upon first seeing the Avengers) “I think they’re Reds — or at least Commie-symps !” or “Now it’s time for the Eagle to do his bit for Uncle Sam !”

It is possible that this character was actually James Dore, Sr. the original American Eagle and a member of the Golden Agency along with Power Princess. The dialogue in the actual books is ambiguous, but gives a faint impression that American Eagle and Cap’n Hawk were the elder and younger Dore, respectively.

He’s much closer to being an alternate version of Hawkman now. He seems aggressive, assertive and ruthless, but he’s not drawn as tall and big as he previously was. The anti-Leftist fixation is gone. Cap’n Hawk wears the winged yellow and orange costume, with a blue eagle logo and blue side wings on the mask.

He still seems to be extremely strong, though, and STR 05 is still a possibility. His wings are now fully functional and allow him to fly quickly and silently – WINGS [BODY 05, Flight (Winged): 06, Gliding (Winged): 03, Thief (Stealth – only whilst Gliding): 06]. The Beast (Hank McCoy) was clearly faster than Dore, though.

Cap‘n Hawk probably has 30-ish Hero Points at this stage.

His usual weapon is a polearm – with an improbably huge mace head on one hand and a sort of double-bladed pick (or scythe, depending on the panel) on the other [BODY 06, EV 05, Recommended STR 04]. Though he’s disarmed he quickly comes back with a large sword that might be some sort of falx or tachi, and boasts about his “inexhaustible supply of special weapons”.

Since he wasn’t visible carrying extra weaponry before he produced this sword, it is possible that he has some sort of ability to summon ancient melee weapons (in DC Heroes Omni-Arm: 05 would likely suffice, limited to ancient weapons shapes and taking a Dice Action to get a new weapon).

Quote: “A bird in the hand is worth ransom ! Trust Cap’n Hawk to know that, Spectrum !”

For most of his career, James Dore, Jr. was known as Cap’n Hawk, a patriotic, shield-wielding, high-flying hero. He was one of the earliest known members of the Squadron Supreme (as he was their third recruit) and the hero of Mayflower, Freedonia.

Cap’n Hawk met the Avengers and Defenders on a number of occasion as a hero from a parallel Earths. These adventures strongly reminiscent of the pre-Crisis DCU. The Squadron Supreme were obvious versions of the JLA, although Cap’n Hawk himself was a cross between Hawkman and either the Guardian or Captain America.

The Squadron took control of their Earth’s USA after a crisis involving the being known as Null. Cap‘n Hawk became the Blue Eagle, an homage to his father (aka American Eagle I ; James was known as American Eagle II at the very beginning of his career).

A steadfast member of the Squadron, he was the one who called for the Golden Archer to be expelled from the Squadron after he used a brainwashing device on Lady Lark.

As one of the biggest supporters of the Squadron’s stance, he was caught by the Redeemers. They used the brainwashing device to make him fight along them.

This proved fatal to the Blue Eagle. During the battle between the Squadron and the Redeemers his wings were drained by Lamprey, and he died of a broken neck after his fall – also killing Pinball, on whom her tried to fall in order to save himself.

The grey-winged costume is the Blue Eagle costume (without the shield). The costume with the blue wings and funky winged helmet is the one he wore as the Condor.

Blue Eagle has a the personality that fits a positive hero who represents authority – including an ability to make good cop speeches. In the Squadron, he’s a good friend of Dr. Spectrum and likes Lady Lark. He also has a rivalry with Archer for the dashing, skill-based hero spot.

“Drop the stolen goods… go back to your homes, and there’ll be no trouble.”

It could, of course, also be interesting to put the old JLA against the Squadron in a dimension-crossing adventure. In such a scenario Blue Eagle would probably lose against any incarnation of the Hawkman, but might fare better against other low-powered members of the JLA.

By Peter S Piispanen (aka The Angel) and Sébastien Andrivet. 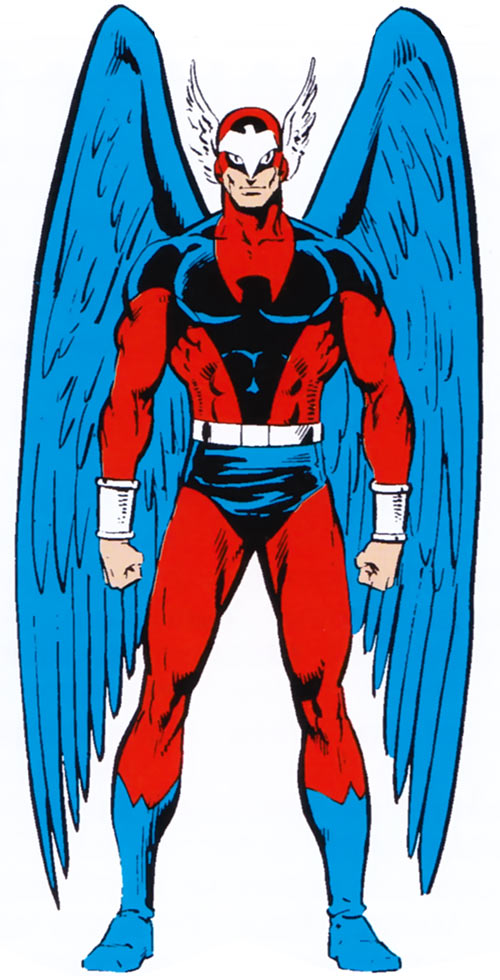 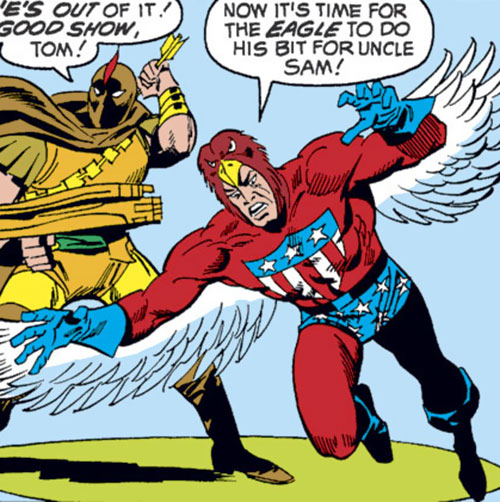