The Blue Knight is an expert marksman, capable of accurately gunning down groups of mooks in seconds.

Mysteriously, the Blue Knight’s guns fire bullets that somehow vanish after striking their target, leaving no trace of having existed save for the injury or destruction they’ve wrought. One assumes that his guns have unlimited ammunition and do not produce empty casings either.

Although he has not been seen to enter melee combat, he carries melee weapons as well and is likely also a capable hand-to-hand combatant.

He never speaks a single word, but his grim visage stuns opponents, or makes them flee in panic, thus rendering them easy targets.

He is somehow capable of tracking down anyone marked as a criminal within the confines of Astro City. His targets manifest a gunsight-shaped mark on their bodies, impossible to erase or rub off, the telltale sign that the Blue Knight is after them.

It is possible to “jam the signal” from this mark by covering it with metal, being underground, being behind metal or water, etc. as if it were a radio signal.

These are the facts. Beyond that little is known about this killer, which gave birth to a flurry of macabre rumours. Part of his mystery is enhanced since we still lack definite evidence in regards to whether his powers come from supernatural forces, are merely the clever staging of a police officer using skilled detective practices, or are a combination of the two. 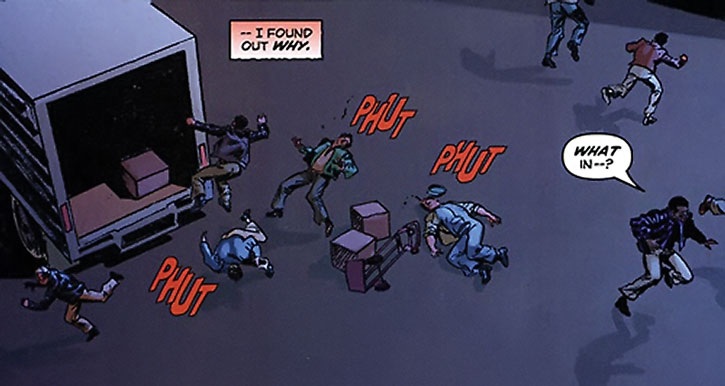 Criminals live in deadly fear of the vigilante called the Blue Knight. Many think him to be only an urban legend.

The rumors and legends they tell each other go as follows: They say he is intangible and walks through walls. He’s a psycho cop that grabs villains to carry them down to hell itself. He had a relative that got killed by criminal elements, and now he’s out to get them all in revenge.

When his work is done, sometimes there isn’t even enough left of the victim to identify him/her; particularly so, since he takes the heads for his skull collection.

He is also in armor and eight feet tall with guns growing out of his arms. The details are many, varied and contradictory, and probably contain only fragments of the truth. He seems to be human, but could have a connection to the supernatural or be a ghost, as was exemplified by him being temporarily possessed by a spirit of vengeance. Nevertheless, his reputation is likely to grow with each kill.

Throughout 1973 and 1974, the Astro City underworld was hit by an extraordinarily deadly vigilante, the Blue Knight. The relentless Knight killed scores of criminals, never giving up, never talking and never offering mercy even for small-timers.

Gangland legends spread about the Knight. Though some suspected that it was some sort of technological trickery using holograms, the more superstitious lot believed that the Knight was undead police who came back for vengeance.

They were almost correct.

The Knight was apparently an officer called Joshua Stone, whose son Damon had been accidentally killed during a gang shoot-out. The likeliest hypothesis was that Stone was possessed by an unrevealed mystical entity encouraging him to act as the Blue Knight, and giving him some supernatural abilities.

Stone apparently also used a few technological tricks drawing on his training as an engineer, and perhaps some high tech from the evidence lockers.

Officer Stone himself believed that the spirit of Damon was behind the supernatural happenings. That seems less likely, though whatever was making him the Blue Knight may have let him believe this out of opportunism. 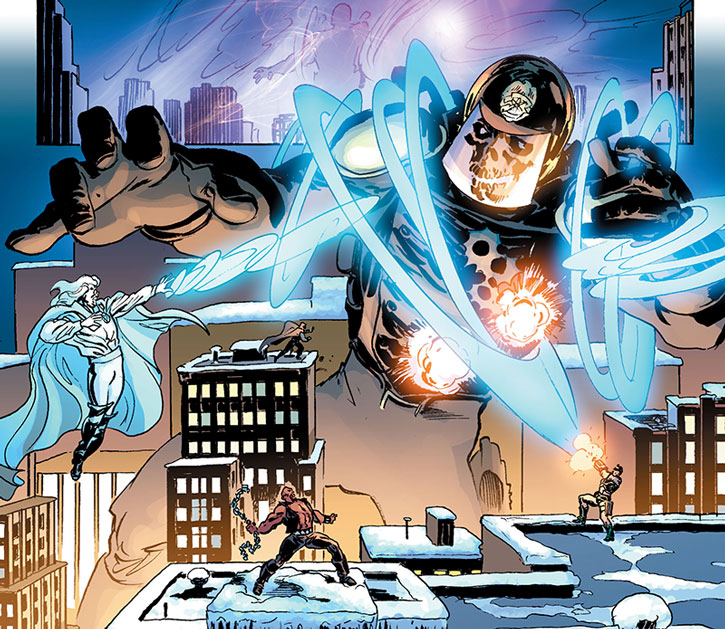 The Blue Knight protected a friend of his, defence lawyer Vincent Oleck, saving him and his family from execution by the Forgione mob. Joshua then removed his helmet in front of Vincent, tried to explain and left. A few months later, the Knight was gone.

A Blue Knight appeared some time later as a massive, apparently magic-based, ephemeral giant over Astro City. Once he was neutralized through the combined effort of several heroes led by Simon Magus, he disappeared and has never been seen since.

A gang of paramilitary killer vigilantes called the Blue Knights arose in 1983, with their uniforms and methods patterned after the Blue Knight’s, but apparently were not active for long.

In one of his last documented appearances in 1983, a newspaper article mentions that it was purported that the Blue Knight was the ghost of officer Michael Stone (not Josh), who was killed with his whole precinct in a mob operation. Whether that was just speculation or if it’s somehow connected with Josh remains to be seen.

The balance of evidence tilts toward the Blue Knight being a paranormal spirit possessing police officer Joshua Stone, and endowing him with mystical powers. The main bits are :

On the other hand the skull visage was almost certainly an hologram inside the Knight’s helmet’s visor, and the disappearing bullets thing could be explained by Officer Stone having access to advanced weapons from the Astro City PD’s evidence locker rather than by preternatural “ghost bullets”. That the “mark of death” behaved much like a radio signal also points toward technology.

Joshua Stone himself said that he was possessed by a voice, and that he thought that it was his dead son Damon. He may of course have misidentified the voice in his grief, desperatly wanting his son to still be with him… or he may simply have been schizophrenic.

The Blue Knight wears a loose police uniform in dark colors with a belt and leather gloves; hence his media-name. His head is covered by a police-style riot mask with a ghostly skull outlined by a blue glow for a face.

It is unknown whether this is his real appearance, like a ghost, or if it’s a holographic mask. The chest piece has what looks like three bullet holes over the heart.

The Blue Knight is very heavily armed. He has a holster for a combat knife on his lower left leg, pistol holsters on each upper leg, a pistol holster under his left armpit and a nightstick or a sword on his back, as well as probable hidden weapons. The visage is, indeed, a fearful and horrible sight… like a relentless ghost of vengeance in the night!

The Blue Knight is a brutal, costumed vigilante who kills the crooks he hunts – and who isn’t very choosy. A frightening crime-fighter who stalks quietly and delivers justice from the barrel of a gun. His identity is unknown; he gives no warnings, never talks, and doesn’t enter melee range.

He just shows up anywhere and starts shooting down hordes of unsuspecting perps. He usually uses a silencer and so he often picks several targets even before anybody realizes what’s going on (while they only possibly hear a faint “phut” sound).

His methodology is harsh and direct, reminiscent of old time gunslingers roaming the west in legendary fashion. He adds seemingly supernatural elements to his fighting arsenal to garner fear in his opponents. His costumed uniform is an icon, composed of various aspects of traditional police equipment, including badges, shielded helmet, batons and guns.

He will never attack representatives of the law. The Blue Knight is a loner. His method of operations distances him from any mainstream organizations, side-kicks, partners or team participation.

He follows his targets from rooftop to rooftop and nobody sees him until it’s too late. Nobody with even a touch of some criminal group is exempt. He is relentless, never stops, nobody can hide for long, and nobody ever escapes. Once targeted a target eventually go down, no matter how long it takes. He usually operates in the night-time.

Only once has he been persuaded not to kill a criminal, and that was by a passionate speech by the criminal’s brother, a police officer.

There is one saving factor: he has never been seen outside of Astro City, and seemingly limits his activities to within the city borders. If a target leaves the city, he/she is probably in the clear. He is usually seen in Astro City’s Kiefer Square area, but will migrate anywhere gangs and organized crime are concentrating.

The Blue Knight might be a facet of the Spectre in the Astro City Universe, just like the Old Soldier is. Being a gun-toting vigilante, he could also be the newest host of the Crimson Avenger’s triggerless .45’s.

The Blue Knight appears in Astro City at about the same time the Punisher pops up in Marvel Comics, and one year after the Ghost Rider makes his publication debut.

Drawbacks:
SIA toward Killing criminals, Secret Identity, MPR (The Blue Knight may be mute; whatever the case he never utters a single word; 5 HPs). 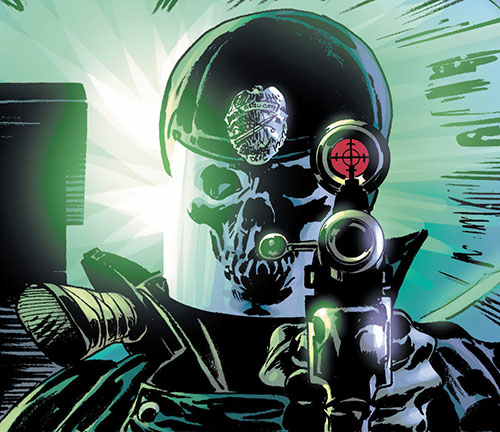 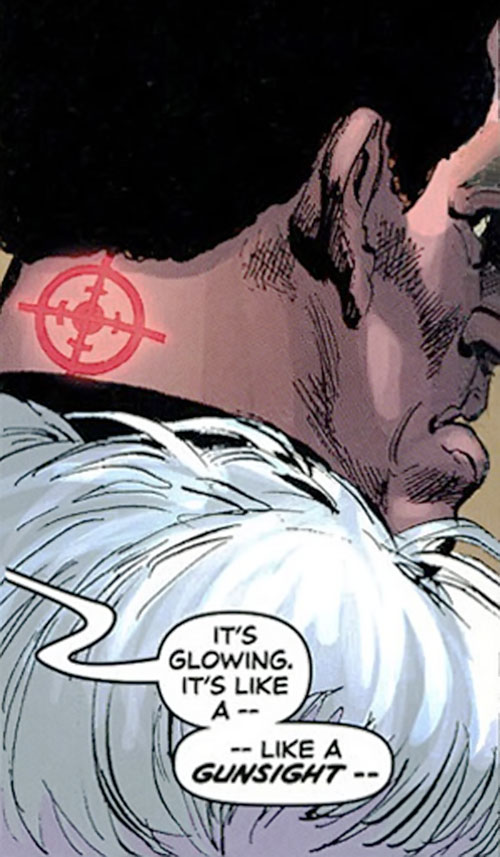 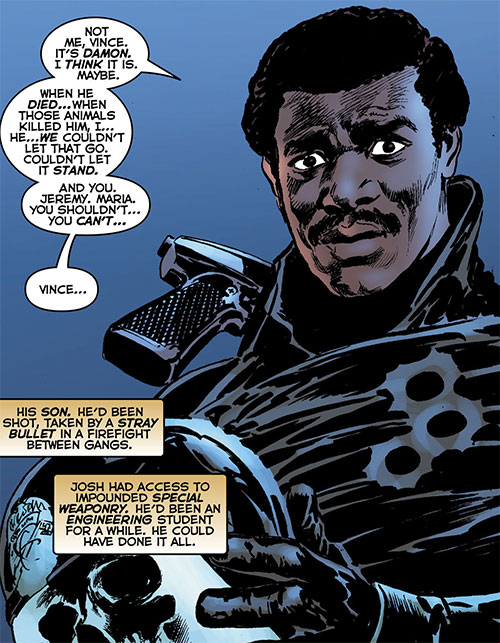