Blue Mary is a recurrent fighter from video game brawler series The King of Fighters. And Fatal Fury before that.

She’s a tough detective as well as an expert in Sanbo wrestling.

She takes her name from a cocktail. The colour of the drink changes depending upon your angle, from clear blue to transparent.

Mary is a trained, experienced investigator and motorcyclist.

She is also highly proficient in commando Sanbo hand-to-hand techniques, which include both striking and grappling techniques.

Her throws are particularly dangerous. She can ignore the weight of her opponent and/or enhance her technique using chiA sort of universal life force/energy in Chinese-influenced cultures..

Some of her attacks have used a stun gun, bioelectricity, or visual manifestations of her chi (such as a red rose or a pink splash). 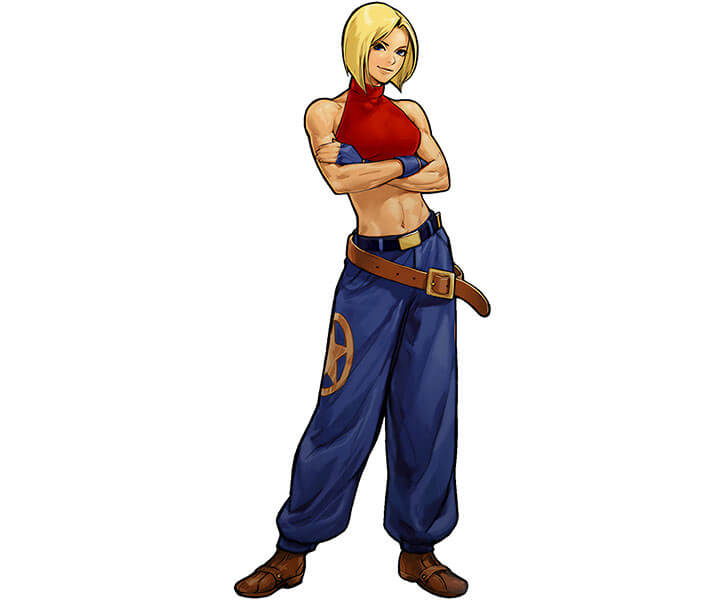 During a terrorist attack against the POTUS, Mary Ryan lost both her father and her ex-lover Butch. Both men being Secret Service agents.

Wearing a jacket Butch had gifted her, and using the combat training he had given her, Mary became a freelance investigator.

Mary made her debut in this game.

She didn’t play a major role in taking down the big bad Wolfgang Krauser.

But she met and befriended Terry Bogard (likely during a friendly sparring match). He would eventually become a “will they/won’t they” love interest. 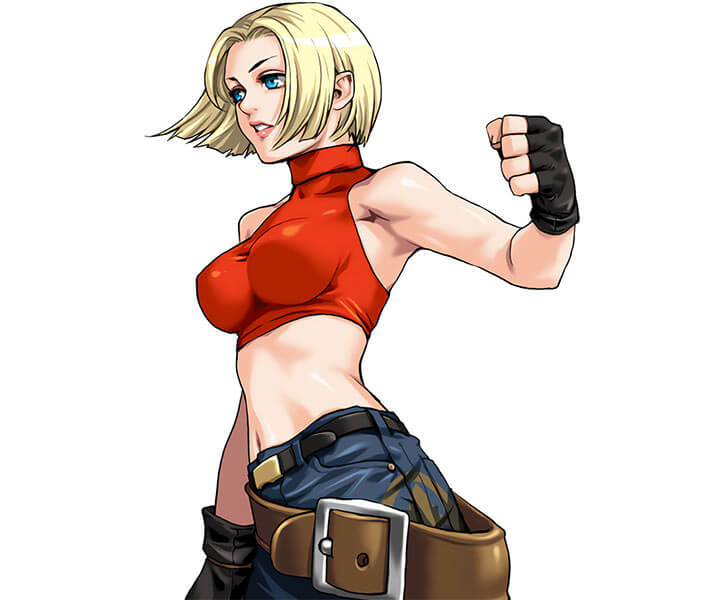 She was around for events of FF3, but didn’t play a major role in it.

She also appears in most of the Fatal Fury games that would come after this, but those have been labeled non-canon.

The King of Fighters ’98

The events of 98 were a dream match and thus considered non-canon. Mary was a playable character though.

The King of Fighters ’99

Their team didn’t have a major impact on the final story. And thus their adventures went largely undocumented.

Mary finally got to play in the big leagues when she joined the Fatal Fury Team. This strong team likely placed third in the tournament – after the Hero Team and Benimaru’s Team.

In 2002 she was still on the same team. They likely placed fourth. The main antagonists, the NEST Cartel, were finally brought down in this game.

The King of Fighters 2003 and New Rave

These games reverted back to the original three fighter teams. Mary therefore placed back with her old crew from ’97.

The King of Fighters XI

Mary joins the Agents Team along with boxer Vanessa and wrester Ramon.

They appear to have been one of the lower tiered teams and didn’t have a major impact on the main story. 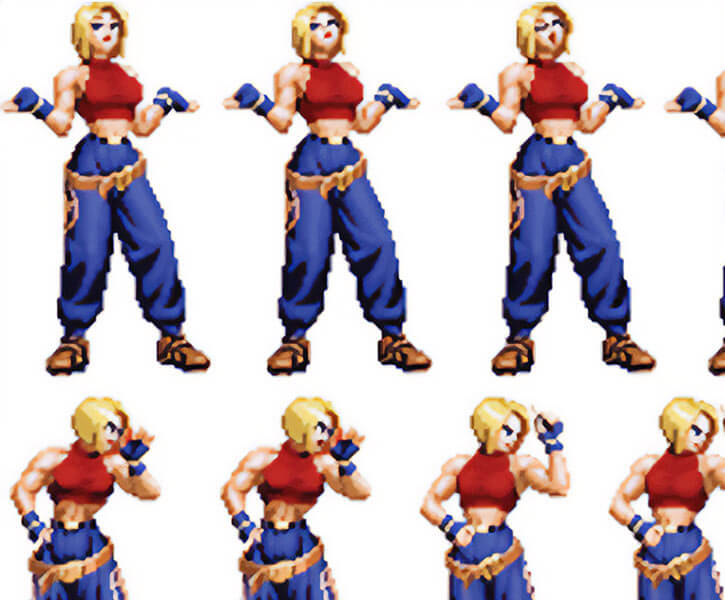 The King of Fighters XIV

Mary took a bit of a break and her off-screen adventures went undocumented.

She returned as a Season 2 DLC character. But her effect on the game’s story was negligible.

The King of Fighters XV

Mary is back with the Agents Team. With Vanessa (again) and Tae Kwon Do fighter Luong. 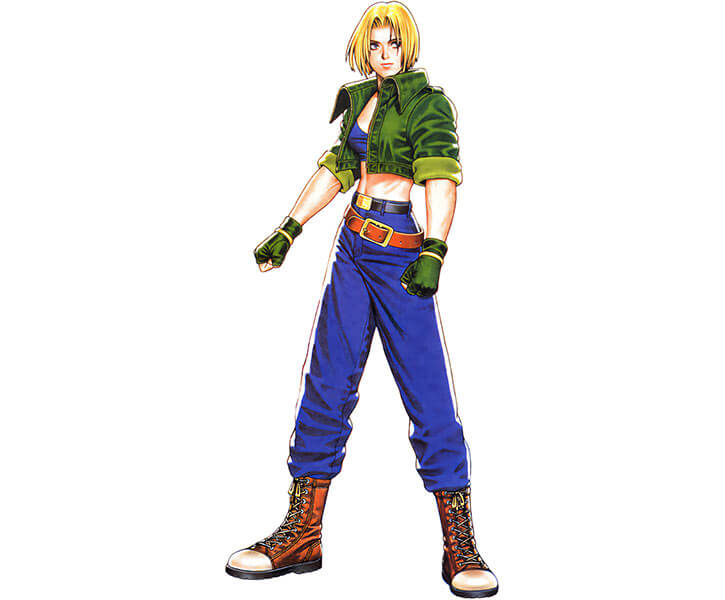 Mary is an attractive, solidly built blonde woman in her mid-20s.

She typically dresses in baggy jeans with a star logo on the legs. As well as a pair of combat boots, a red half-shirt and a very loose belt – and fingerless gloves.

One of her most prized possessions is her brown leather jacket that once belonged to her beloved Butch. When fighting, she typically tosses it to her German Sheperd, Anton, who looks after it for her.

Mary is a very spirited young woman, and knows well known of how men fall for her beauty. She even exploits her charms to make her fights easier.

She is as gracious as a rose, but also with deadly thorns.

Once in a while, Mary feels a bit lonely, that’s when she begins to sing a blues.

Mary is, however, also a very dedicated woman, who has no other vision in mind than to complete her mission, and thrash the bad guys!

Blue Mary is very friendly towards everyone, but she knows (or thinks) that her job must come first before everything else. Mary developed a strong bond with Terry, but they never seem to assume any relationship.

Her heart might have loneliness and sadness storming in it day and night. But Mary is really an intense woman, who has a courageous spirit, and will never relent, in her fight against crime. Her appearance can be quite deceiving.

Mary, along with her dear Terry, has been through a lot together since they first met each other. Will she finally be able to leave her tormented past behind to find happiness with Terry someday? 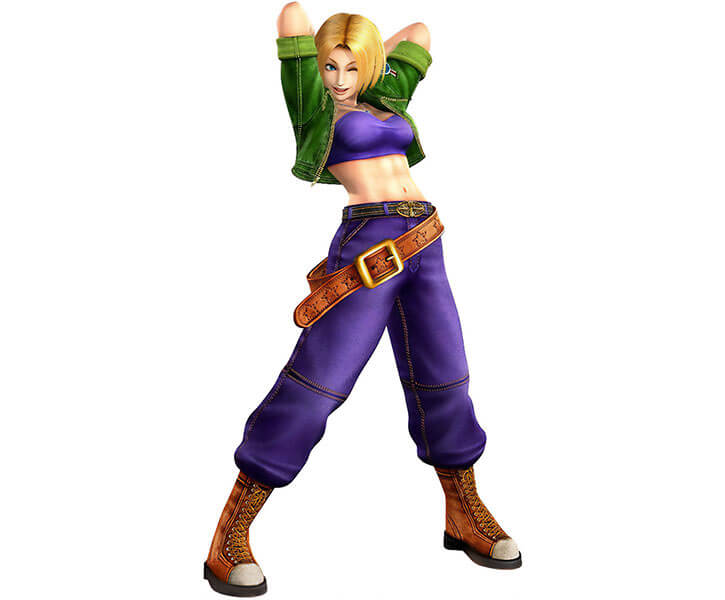 “I guessed that you were here. Hmm, it’s like my women’s intuition… anyway, looks like you’re having fun. What were you talking about ?”