“In fearful day, in raging night,
With strong hearts full, our souls ignite,
When all seems lost in the War of Light,
Look to the stars,
For hope burns bright !”

This profile is for a generic Blue Power Ring worn by the Blue Lanterns, representing the emotion of hope.

Blue Power Rings only have most of their powers (other than flight and some protective powers) when in the presence of a Green Power Ring. This is because Will is necessary to provide the drive needed behind Hope. The Ring can also lead the wielder to where there’s a need for their power.

One of the few rings to be explicitly powered by the emotion they represent, Blue Rings gain great power by drawing on the hope around them. One telling example is when a pair of Blue Lanterns drew on the hope of three billion or so residents of a planet orbiting a dying star, and used the power gained to de-age the star 8.6 billion years. 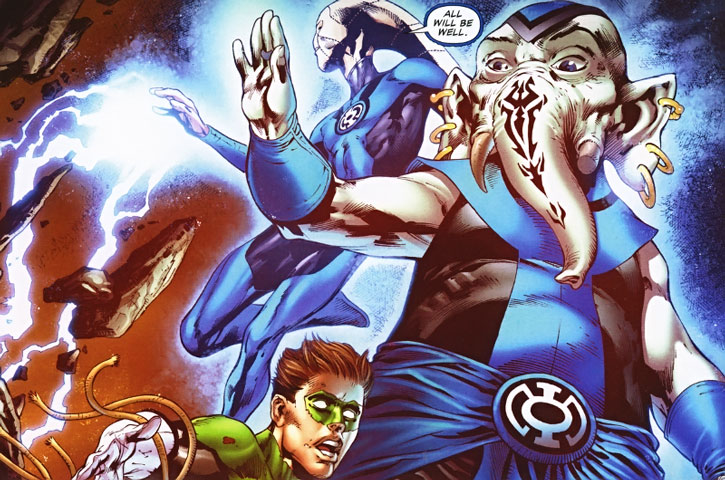 Should the wielder’s hope waver, due to the situation proving particularly disheartening, or someone targeting their hope in some manner, the Ring may become powerless. There was an example of a Blue Lantern on an important mission who, seeing the general mayhem around him, lost hope, and thus the Ring.

It can also ignite hope in others, producing illusions specific to them to do so. This can counter the extreme emotional states brought on by some rings, such as the avarice of Orange, or the rage of Red. Furthermore, Blue Rings are the only known means of completely purging the influence of a Red Ring from someone’s system.

They were also able to end the Black Ring’s possession of those who’d been previously revived.

The presence of a Blue Ring has a beneficial effect on Green Rings. They boost their charge and protect them from the corrosive effects of a Red Ring – and a negative effect on Yellow Rings – quickly draining them of their charge. The bolstering of Green Rings can be difficult to turn off for new Blue Ring wielders.

Other rings select the wearer and they can be good to go. But Blue Lanterns are (while the corps is setting up at least) chosen by the last selected Blue Lantern (using the Detect Power of their own Ring) and taken to Odym. There, the responsibilities are discussed with them so they can make an informed decision on whether to accept the Ring. This process can take up to a couple of weeks.

It’s unclear whether the death of a Blue Ring wielder will see the Ring revert to it’s programming and search its successor alone, or whether it would return to Odym. By either method of recruitment they seek optimistic individuals who hope for the best for everyone.

Exemplars of the traits the Blue Power Rings look for include Saint Walker (sector 1), Warth (sector 2), and Barry Allen (sector 2814).

There doesn’t appear to be any extreme influence on the wielder’s persona from the Blue Ring. But since some of their abilities work better powered by hope, and since that is one of the things the Ring looks for in them, it may give a minor boost in this direction.

Blue Power Rings affect Green and Yellow Rings which come into their proximity (around 6 APs). By default its effect on Green Power Rings is always on, but may be turned off at the experienced wielder’s will. Their effect on Yellow Rings has to be triggered by consciously willing it.

Green Power Rings – as many as are in range – are charged up to 200% in a few rounds, increasing their power level (Enchantment). They also suppress the Burnout caused by Red Power Rings triggered.

They can cause a Yellow Ring’s charge to deplete at an increased rate, giving them Power Burnout (as described in the Power Rings (Main Article) entry).

A Blue Lantern’s hope-generating aura can affect certain Drawbacks, such as the Irrational Attractions caused by Red and Orange Power Rings, and the Rage of a Red Power Ring.

If the target of a successful Broadcast Empath attack has an Irrational Attraction/Fear/Hatred or Rage an attack may be made by Broadcast Empath (Drawbacks) (a multi-attack if the target has multiple suitable Drawbacks) against the Resistance # of the Irrational Attraction/Fear/Hatred (5 for Minor/11 for Serious/18 for Catastrophic), with the same levels used for Rage.

Success indicates the Drawbacks are neutralized for as long as the Blue Lantern focuses on maintaining them (or permanently in the case of the effect of the Red Power Ring (see below), if the target is wearing another colour Power Ring), and would have to be triggered again after that time.

When targeting a Red Lantern’s Rage it performs a Combined Power attack with Damage Transference, reactivating the Red Lantern’s heart and cleansing their blood so they don’t die from losing the Ring.

Did you Wish Really Hard ?

This would be an Area Effect Emotion Absorption on the three billion residents of the planet, fuelling the Omni-Power for Flame Control to reignite it.

Blue Lanterns can also fuel this with their own hope, such as when Barry Allen used it to help Bart Allen resist the Black Power Ring. 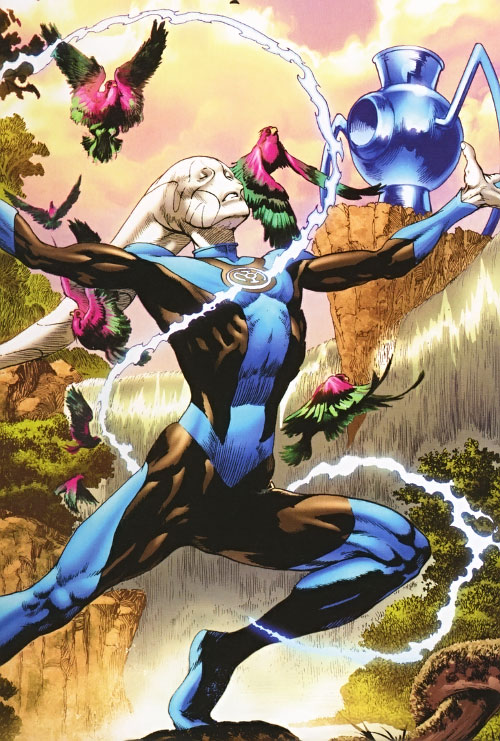 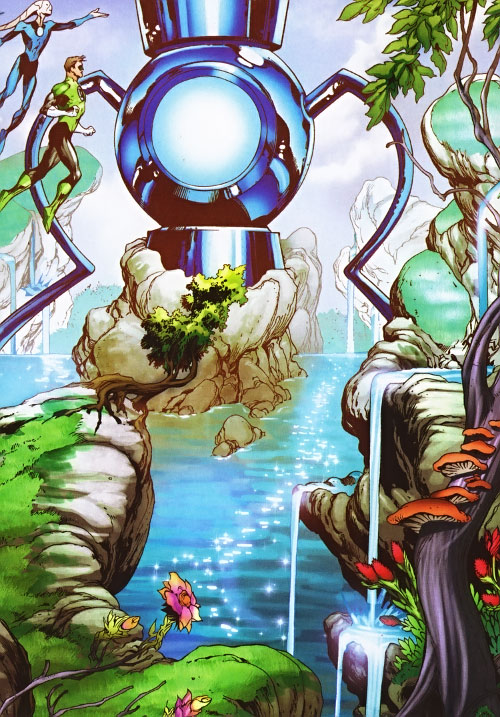 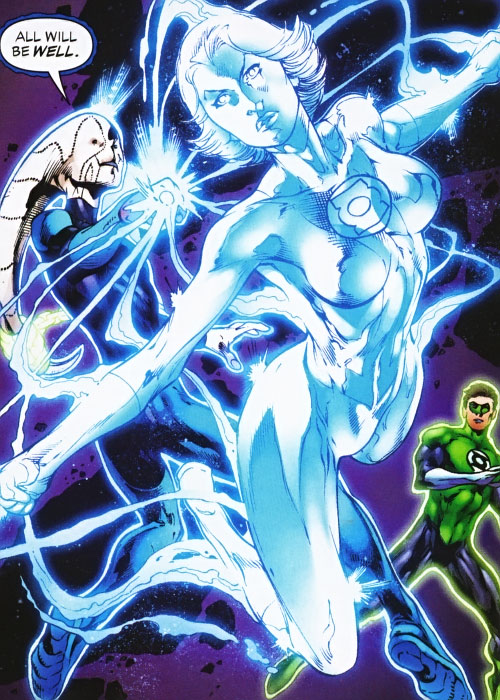 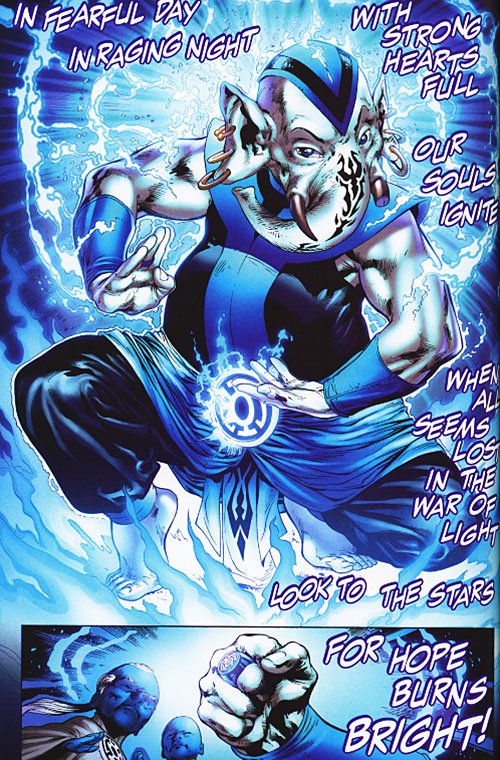 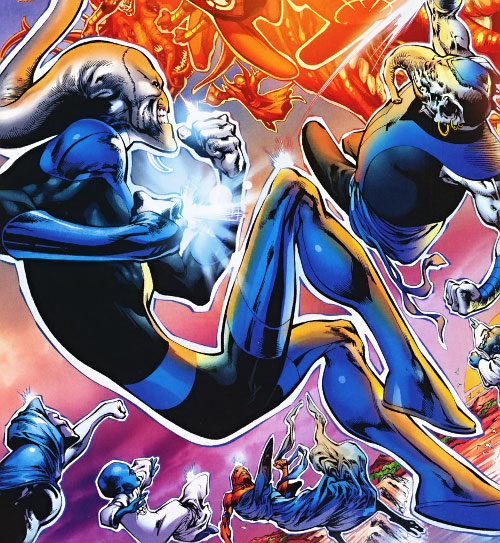 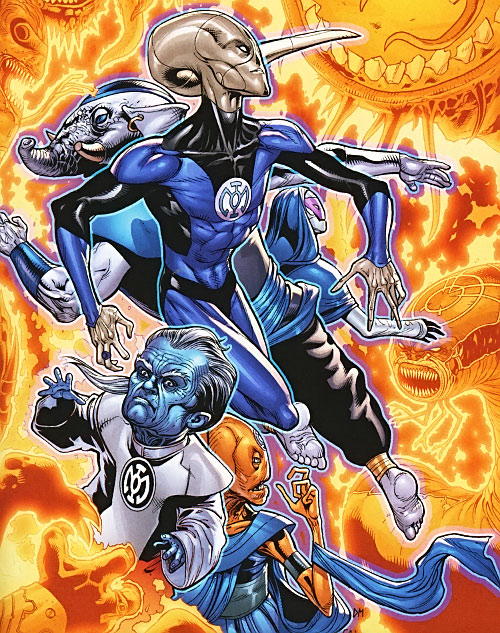