The Blue Snowman was a Wonder Woman encounter back in 1946.

What makes her remarkable is her uncharacteristic return in 1948, during the Villainy, Inc. story line.

Miss Brilyant uses her father’s inventions to sow terror – whether she has technical skills of her own is unclear. This entry assumes that she does, but it is not demonstrated.

Byrna Brilyant has a light and dexterous touch. That makes her an expert pickpocket. She is also able to move around silently, and can run pretty fast when chased. She’s about as fast as an excellent amateur athlete.

The Blue Snowman also had robots. She mostly used these as messengers and bodyguards.

The Blue Snowman’s chief weapon is the telescopic snow ray. It looks more or less like a full-sized 1940s telescope in a cupola on top of her building. And it can indeed observe distant scenes like any telescope. 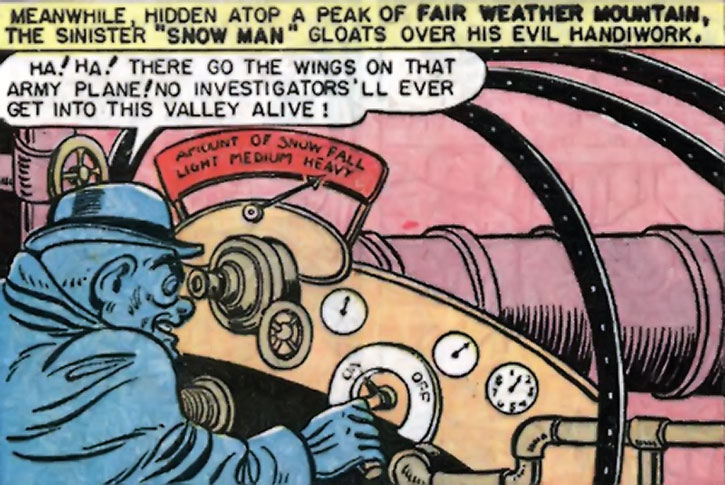 The snow ray trigger local snowstorms. These are heavy and fierce enough to down a plane through the accumulated weight of snow and ice, which may even break the wings. The cold can also be devastating against targets not equipped for near-Arctic conditions.

Furthermore, the snow and ice are a special, blue chemical formulation. Thus, it will ’freeze” living beings it falls on, turning them into blue statues if they get exposed to too much blue snow. No amount of thawing, or brushing the snow off, will ever free the target. However, some superhuman beings can shrug off the effects. And the Blue Snowman has an antidote.

Miss Brilyant is the daughter of a famous scientist, who invented blue snow to serve humanity. Presumably, her father intended the strange snow to serve as some sort of flash-freezing compound. Or perhaps a new type of refrigeration, such as the magnetocaloric  effect. As to the daughter, she became a local schoolteacher.

Some years after her father died, the money-mad Miss Brilyant came up with the identity of the Blue Snowman. That was part of her plot to ransom the community she was living in – the farmland of Fair Weather Valley.

Using her blue snow weaponry, she turned livestock and loved ones into blue statues. She then extorted funds from the terrorised farmers while the incompetent local authorities bickered. One of the Holiday Girls stumbled upon the situation and called Etta Candy. Soon an Army plane flown by Steve Trevor and Diana Prince came to Fair Weather Valley to investigate. 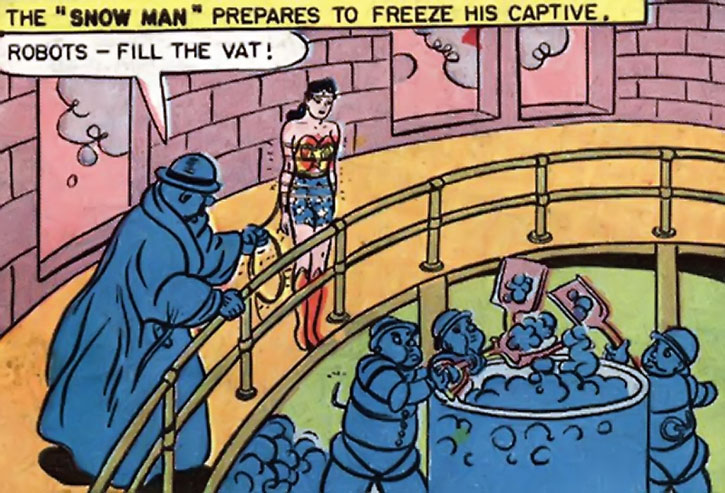 The Blue Snowman destroyed the plane, but Wonder Woman saved Trevor and investigated. She soon ruined the Blue Snowman’s plot and unmasking her. And it would have worked too, were it not for this meddling Amazon !

Miss Brilyant was imprisoned by the Amazons. Presumably the local authorities were only too happy to pass the problem on to somebody else. The Amazons also stored the… unusual Blue Snowman costume.

Some time later the dastardly Eviless organised a breakout in the Amazon prisons. She formed Villainy, Inc. – see our entry on writeups.org for more about that.

Villainy, Inc. took over Paradise Island, and set up an ambush for Wonder Woman. The Blue Snowman, having constructed a new version of her blue snow ray, was the first to attack, catching the invisible plane in cold and snow.

It didn’t work. Miss Brilyant was one of the Villainy, Inc. members who were recaptured before they could leave Paradise Island.

Not much was apparent, though we’re told that she’s money-mad.

“No living creature can resist a blow at the base of the brain, and an unconscious Amazon can’t resist blue snow ! Ha ! Haaa !”

“Ha ! My telescopic snow ray has caught Wonder Woman ! Even if she can get out of her plane, she’ll freeze to death instantly !”

Drawbacks:
MPR (Slight stuttering, mostly on “s” sounds at the beginning of words), Secret ID (before her encounter with Wonder Woman).

This obscure character has just one appearance and a half, and the stats are thus tentative. 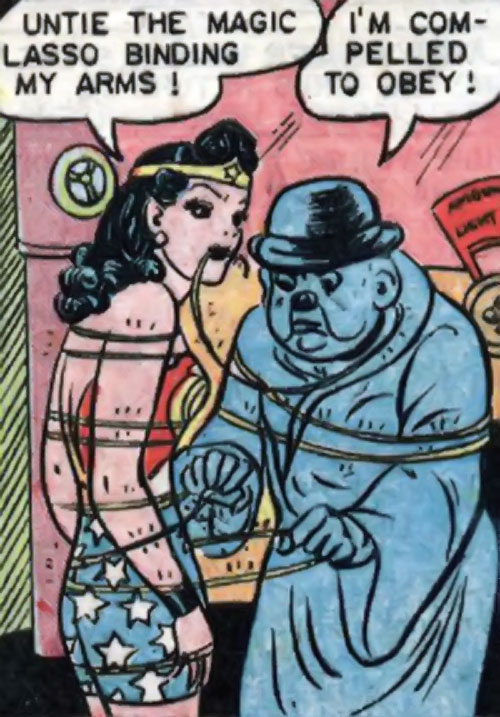 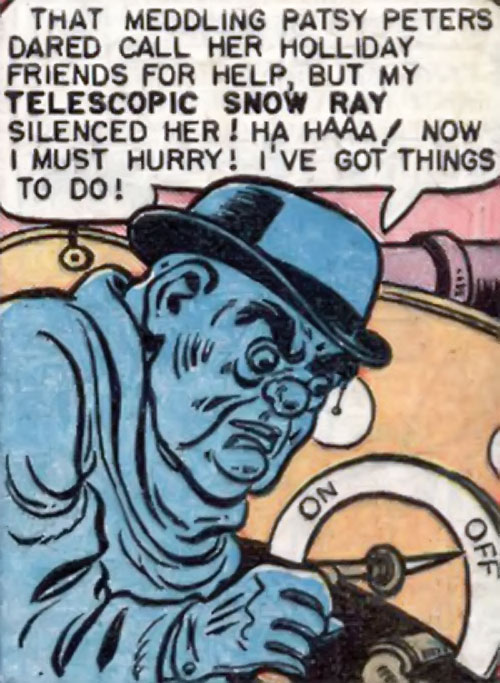 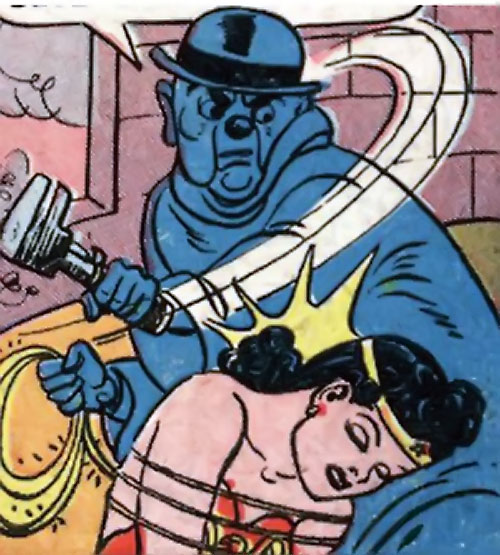 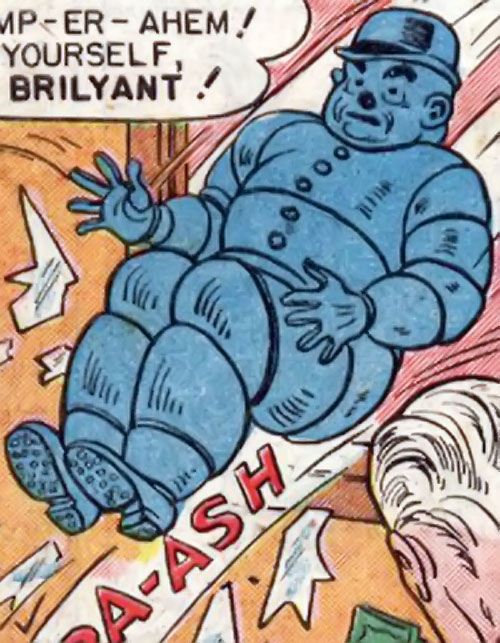 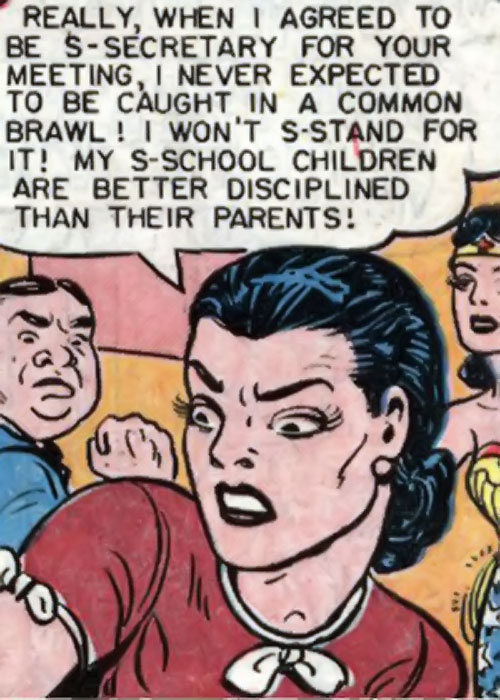 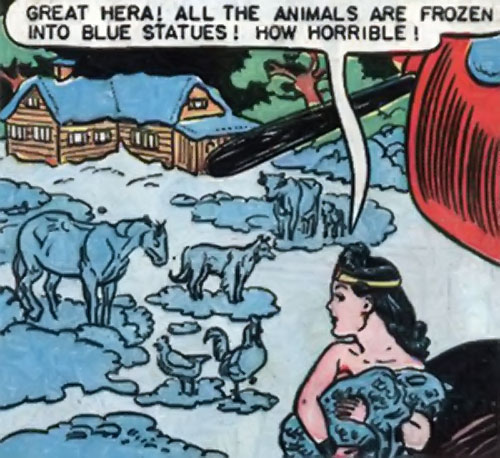