This Marvel character first appeared in 1978. It was just a goofy concept (disco guy on rocket skates) that wasn’t meant to be around for long.

However, he was redesigned just before his 1986 death. And oddly enough the character now worked.

Thus, the Blue Streak identity would eventually have a successor.

He’s a well-trained athlete and operative, as well as a superlative skater.

Mr. Thomas is capable of conducting lengthy undercover missions. However, he doesn’t seem to be a competent actor, and his composure has limits.

The Blue Streak’s original equipment was a pair of rocket-powered, one-wheel skates.

The top speed wasn’t revealed. But given the complete lack of safety equipment I’d imagine it wasn’t above 35 mph (55 km/h). If that.

The rockets could also provide upward thrust. A rolling Blue Streak could leap 10 feet into the air even on entirely flat ground. The shock absorbers also made it possible to briefly skate up or along walls.

With this mobility, the Blue Streak would often manoeuvre to attack his opponents from behind. Then hold them for his teammates to attack. 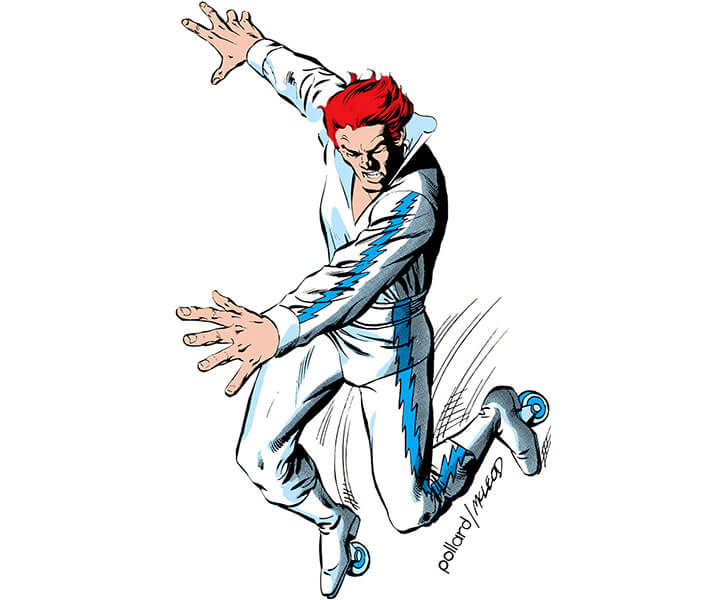 This was much more convincing :

He may already have had the wrist blades in 1986, since there was no need to deploy them during this appearance.

Since in 2009 he didn’t use his lasers at all, the missiles may have been a replacement. He likely wasn’t buried with his lasers. And the Hood’s mob may have been reluctant to replace such an expensive weapon system for a disposable undead servant.

One curious scene in a 1994 Captain America story shows the villain Dead Ringer replicating the powers of the Blue Streak in order to heal bad burns. Such powers are never mentioned or demonstrated in the original material.

But this is clearly a power copied from Blue Streak (Don Thomas). And the writer is Mark Gruenwald. So that’s authoritative.

This also eases the suspension of disbelief as to why S.H.I.E.L.D. would field a disco dude on roller skates.

Some early 1978 disco song for atmosphere, lessee… Oh yass. The chronology is just right for the landmark Supernature.

It was a huge hit in American clubs, and is one of the high points of vintage “French Touch” disco.

During the late 1970s, criminal alliance the Corporation was briefly a heavyweight. While it eventually fell apart, it could go toe-to-toe even against S.H.I.E.L.D. and some super-heroes.

One of their most impressive intelligence wins was to inject two (!) double agents within the 1977-78 version of the Super-Agents of S.H.I.E.L.D.. These were Don Thomas (a.k.a. the Blue Streak) and Denise Baranger (the Vamp).

But the Falcon (Sam Wilson) agreed to train and lead the team for several months.

But you can’t fool all the people all the time

The Corporation eventually took one chance too many by capturing the Falcon. This led to Cap’s return, and he deduced that there was a traitor among the Super-Agents.

Captain America bluffed that he knew who the traitor was. Blue Streak responded by leading a Super-Agents attack against Cap. He told them that it was clearly a training exercise.

Cap repelled the attackers, and Blue Streak tried to flee, exposing himself as the traitor.

Cap stopped him, and Baranger began beating Thomas to death. She pretended to overreact in anger, to silence the compromised double agent. But Cap prevented the Vamp from murdering Blue Streak.

Arrested, Blue Streak told Cap where the Falcon was. 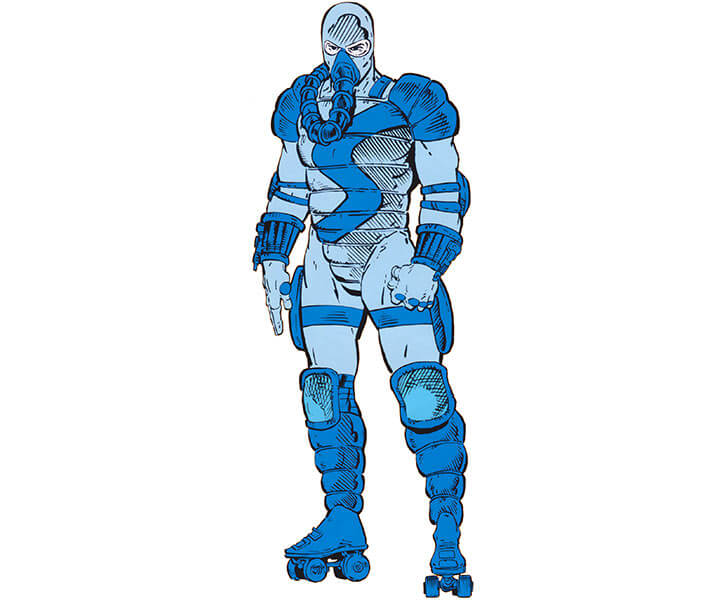 Mr. Thomas was eventually freed. He signed the usual contract with rogue industrialist Justin Hammer. That meant 50% of his take in exchange for weaponry and support.

Blue Streak thus acquired much better equipment. This gear was used for a successful criminal career in the Midwest. Blue Streak would intercept vehicles carrying valuables, cut them open, and zoom away with the loot.

However, a serial killer called the Scourge of the Underworld was preying on third-rate criminals such as the Streak. Thomas ignored this threat, but Captain America was investigating it. This led him to cross paths with Thomas, whom he recognised as the Streak.

The Blue Streak narrowly escaped from Captain America after a long chase. He then fled by hitching a ride with a passing semi. But the trucker was a disguised Scourge, who murdered Thomas.

Dead Ringer (Lou Dexter) took a tissue sample (perhaps a finger) and preserved it. He could use this to copy the Blue Streak’s appearance, costume, powers and skills. 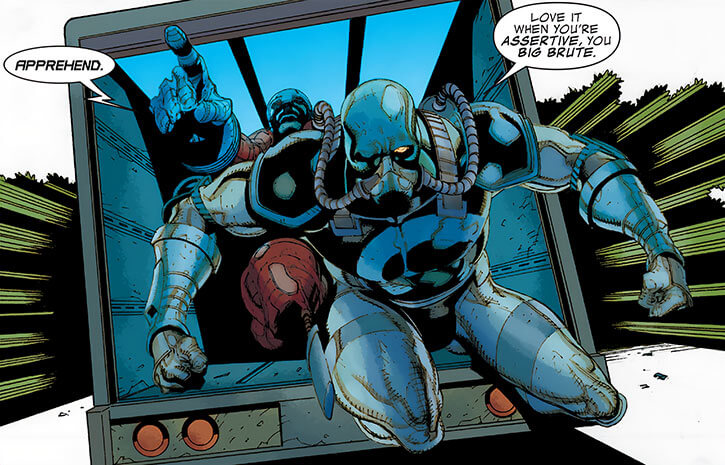 He also told them that their killer had actually been a disguised Punisher (Frank Castle).

During one attempt to kill the Punisher, Blue Streak was teleported in by Megatak. He was then sent after Henry Russo, Microchip’s successor as the Punisher’s technician.

Thomas almost killed Russo. But he was hit from behind by a modified version of the Rocket Racer’s skateboard. This broke his neck and re-killed him.

However, it is credible that his regenerative power allowed him to survive. Especially since it might be enhanced by demonic magic.

An overconfident jerk with an abrasive, selfish, unempathic attitude. He wants to look like a big tough impassive killer man.

However, he has a level of cunning and discipline. He fights in a competent and tactical manner, and will reluctantly realise when he’s outmatched.

(1986) “Okay, shield-man, time for you to have your head handed to ya — courtesy of the meanest mother on eight wheels – BLUE STREAK !”

“You scare me about as much as an old cheese sandwich !” 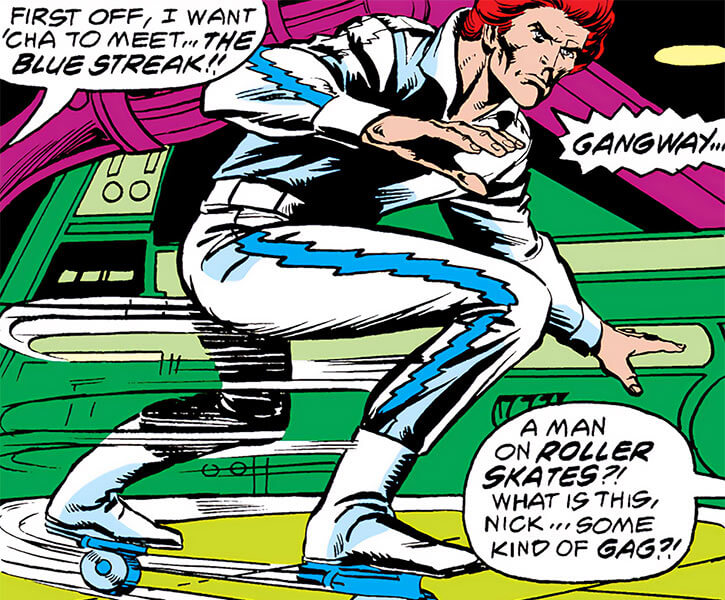 Acrobatics requires being on rocket skates.

Regeneration APs are of course arbitrary. But from Dead Ringer’s comments, they can’t be too high.

He likely had further Skills from S.H.I.E.L.D. training, but nothing was demonstrated or sufficiently implied.

Looking back the INT/WIL scores may have been tight-fisted. They could have become 04s by the mid-1980s.

There’s no data to estimate how protective the costume is. The old TSR stats went fairly high, but the 2009 re-death is a data point against that. *If* the costume was the actual one and not a cosmetic replica.

(But heh, at least it seems like I can go with simple /BODY/ without unwanted side effects, for a change.)

Originally, the rebreather is simply part of a system to breathe at high speeds. But in 2009 we saw it hooked to small tanks. This suggests a bit of Sealed Systems, which people will likely assume anyway when seeing a rebreather. 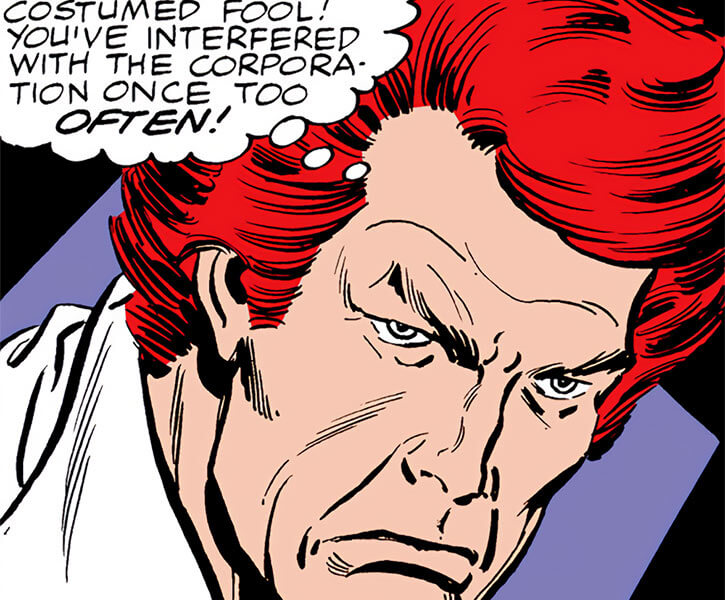 1970s rocket skates… ● 2 points (Removable) ● Descriptor: Technology
– Speed 4, Leaping 1 — Limited 1 (to smooth, even surfaces).
– Movement 1 (Can skate along suitable walls for one round when at max speed).

… then 1980s rocket skates ● 3 points (Removable) ● Descriptor: Technology
– Speed 5, Leaping 2 — Limited 1 (to smooth, even surfaces).
– Movement 1 (Can skate along suitable walls for up to two rounds in a row when at max speed)