He stood out to me because of his loyalty. Something was going down, and Bob was right there.

For more context check out the character profile for Tim Burton/Michael Keaton’s Batman.

Bob is a hired gun working for Jack Napier.

Jack is going places and one day will run the crime world of Gotham. Bob sees the potential and intends to be there when he does.

Bob stands out among his peers because of his initiative and loyalty. He isn’t head and shoulders above them, but he’s the guy who’s always there. He acts to save his boss, and doesn’t make big mistakes.

He’s usually armed with a .45 Colt semi-auto pistol and a large Bowie knife. 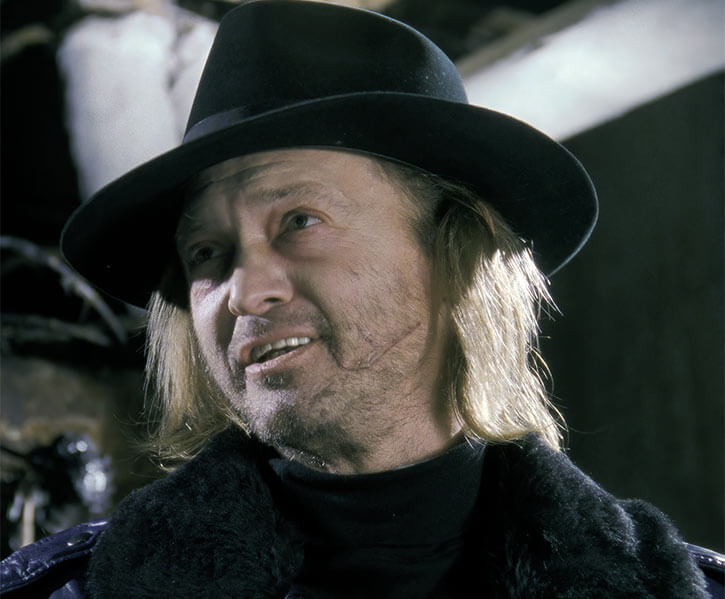 Crime ran rampant in the densely populated city, Gotham. Streets were overrun and public officials helpless. With Gotham’s 200th anniversary festival coming up everyone was anxious.

Meanwhile a new vigilante, the Batman, made his debut.

Rumors said that he couldn’t be killed. That he drank blood. Officially, the police denied his existence.

As to Jack Napier, once a small-time criminal, he was gaining notoriety. He was eager to make a move against his own boss, Carl Grissom. Jack wanted to run things. And he was sleeping with his boss’s wife.

Unfortunately for Jack, Grissom already knew about the affair.

When Dent moved against Axis Chemical, Grissom sent Jack there. The job was to destroy anything linking his organization to the company. But it was a setup. 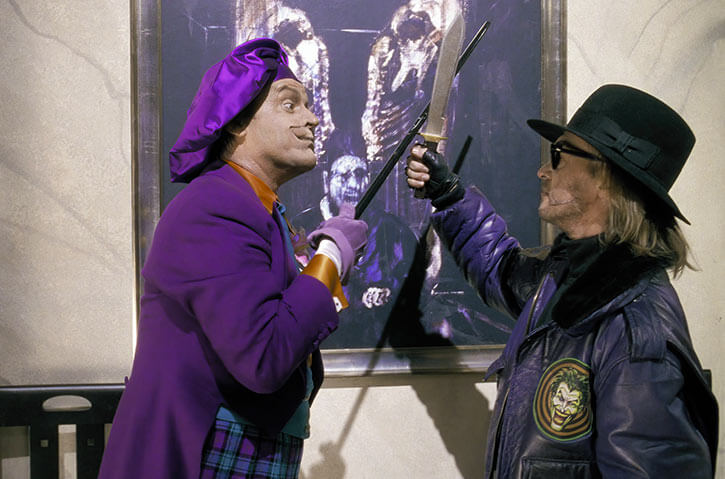 The police got an anonymous tip and converged on the chemical plant. Batman came too. He caught up with Jack and had him firmly in his grasp.

But Bob, Jack’s exceptionally loyal bodyguard, pointed his gun at the commissioner’s head. He forced Batman to let Jack go.

Jack fell into a vat of toxic chemicals. He was then flushed into Gotham’s sewers. The chemicals, the damage, and the trauma transformed Jack into his new persona, the Joker.

Meanwhile, Bob and most of the crew escaped.

Change is in the cards

When Bob and crew reunited with Joker, they all got Joker patches sewn on their coats.

Joker and his gang killed Grissom and took over Gotham’s underground. They then started a crime spree. But the vigilante Batman countered each of his moves.

Bob gathered information for Joker. While Batman’s identity remained a mystery, he learned of two reporters chasing any stories about Batman. Alexander Knox and Vicki Vale.

With the festival coming, Joker planned to get all Gothamites into the streets. He called a truce and promised to drop twenty million dollars on the crowd.

He then challenged Batman to a duel. A one-on-one fight.

During the parade, Batman foiled the Joker’s plan to poison everyone. Frustrated, the Joker asked Bob for a gun.

When he handed it to him, Joker shot Bob dead on the spot.

Bob wears his hair greasy, straight, and long but thinning on top. He has a sparse beard and mustache.

After Jack became the Joker, Bob wore a purple leather jacket with Joker face patches sewn on it.

When in public, Bob smiled and mimicked his boss. 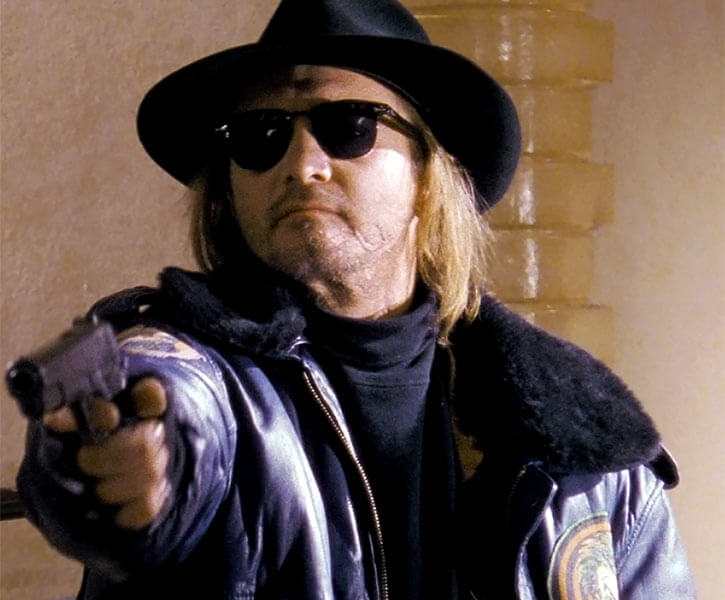 Bob is the type of guy you’d want to hire. He’s sharp, observant, and quick.

Bob takes care of things. While waiting for a meeting he will wipe down the car or scope out the area to make sure it’s clear.

He shifts nervously from one foot to the other when he’s on the job and there’s nothing to do.

Always with his eye on those he’s protecting.

Joker: “Bob. I want you to go down to the Globe and follow that reporter, Knox. Take your camera. See what he knows about this Batman. And Bob…” (Deep breathing) “Remember… you… are… my number one… guy !”
Bob: “Yes, sir.”

“Check his wallet.” (While trying to identify an unconscious Batman.) 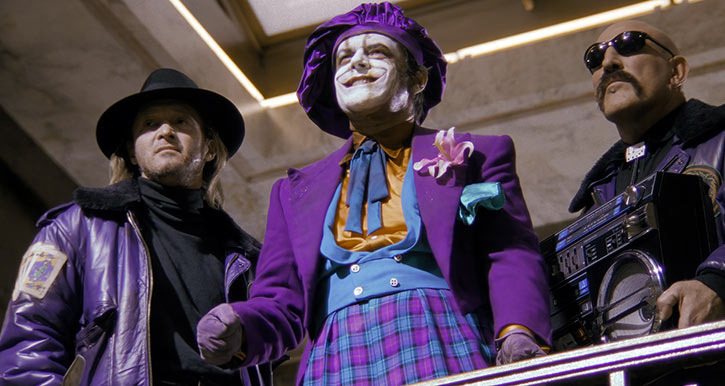 Oh yes. I see Bob the Goon working in the DCU proper.

He doesn’t have to work for the Joker, still, whoever he works for he’ll stick with.

He could be a friend of Echo and Query. 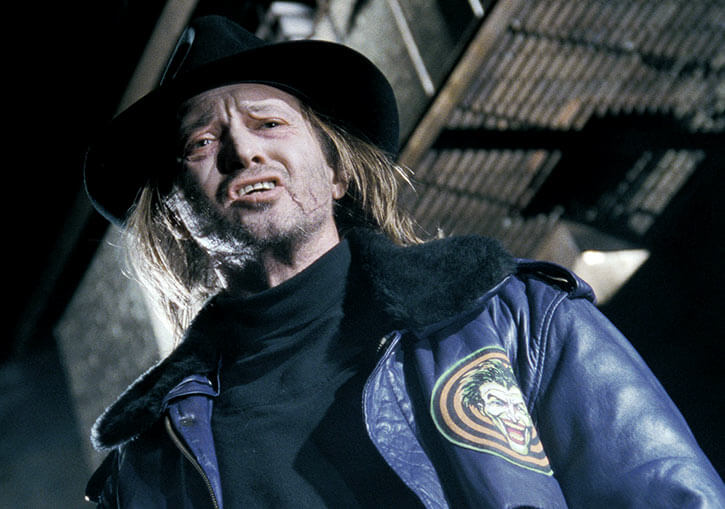 A 198 points Character (without equipment).

Gritty – While the events of the movies were outlandish, the effects of the Hero Points expenditure of the characters seemed fairly limited. 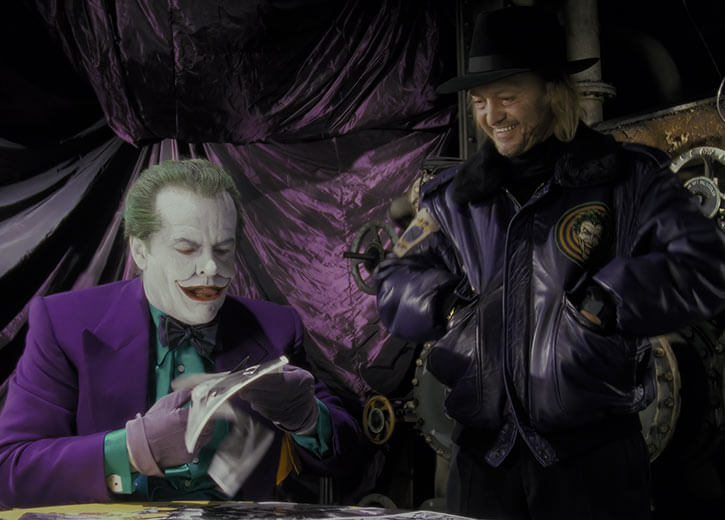 I’ve tried to make Bob stand-out among his peers through his Advantages and his equipment.

Robert Wuhl reprised his role as Alexander Knox in Supergirl: Crisis on Infinite Earths: Part One (2019). That episode established the Batman film takes place on Earth-89, a reference to the year of its release.

It was Jack Nicholson who convinced the filmmakers to cast his close friend Tracey Walter as Bob the Goon. 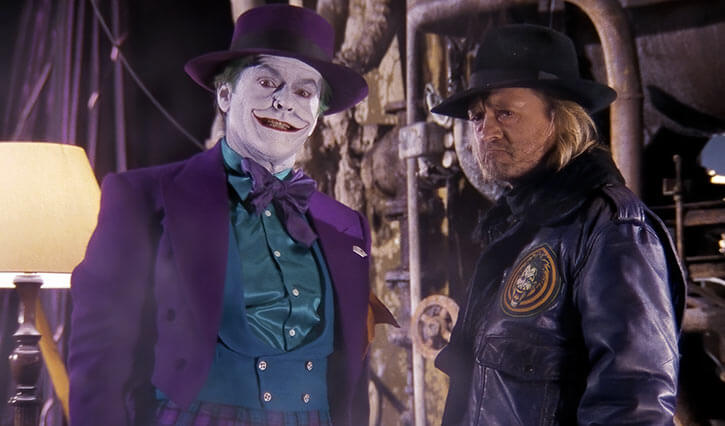 Bob gets an action figure

Bob the Goon was one of only three action figures produced by Kenner for the 1989 Batman movie toyline. On his action figure bio, his name is: Robert ‘Crazy Bob’ Capistrano.

This action figure also had a kicking-action. Never seen in the film. If you want to highlight it add some Martial Artist linked to his Dex.

Almost ran out of room, eh. Here it is. 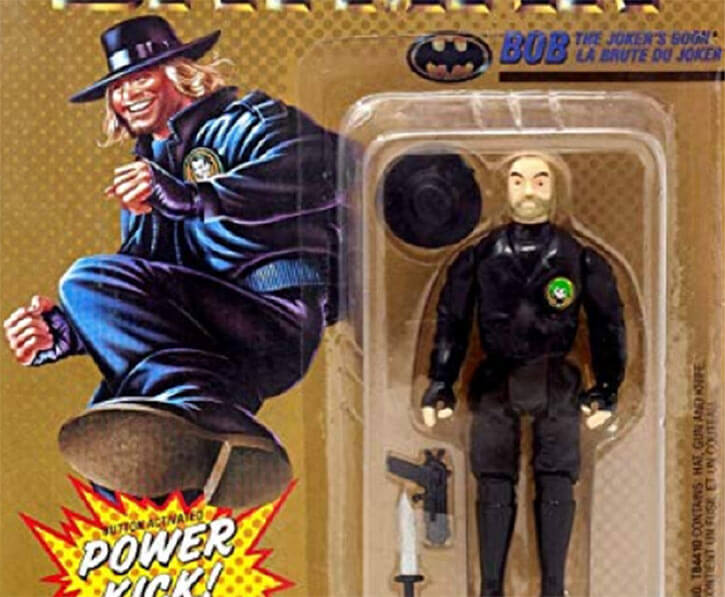 Source of Character: The 1989 Batman movie, played by Tracey Walter.