They specialise in wielding a pair of golden, double-edged combat daggers. In their hands those are efficient as offence and defence in melee, and as thrown weapons.

Bolo and Kimba are the two bodyguards of Fah Lo Suee, daughter of Fu Man Chu and sister of Shang Chi. They are the two most skilled members of the Golden Daggers assassin sect, sometimes called the Oriental Expediters (after their most famous cover business). They do Fah Lo Suee’s bidding. Apparently, they are former Si-Fan.

They first appeared when Clive Reston, Leiko Wu and Shang Chi located the Expediters’ headquarters in Lausanne, Switzerland. It was actually a trap, but the MI-6 agents prevailed. Reston managed to fend Kimba off long enough for Shang Chi to take out Bolo, then come help Reston and take out Kimba.

Fah Lo Suee watched the fight. She was chiefly interested in testing the mettle of her brother Shang Chi and his ally.

Fah Lo Suee later sent Kimba and Bolo to briefly fight Shang Chi. That was to verify that it was him and not his clone. However, they were spotted by Death-Dealer, an assassin of Fu Manchu. Since Fah Lo Suee had turned against her father, Death-Dealer ambushed Bolo and Kimba as soon as they left. He unleashed a gargantuan mutated scorpion at them and apparently killed them.

Bonuses and Limitations:
Evasion and Martial Artist both are Contingent Upon wielding knives (-1). 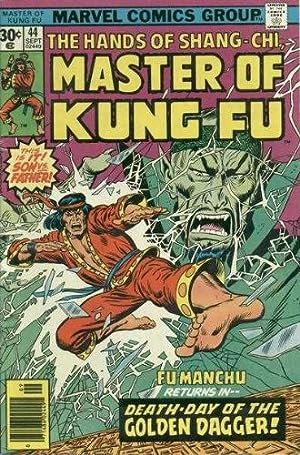