Capes was a 2003 mini-series, by Mark Englert and then semi-obscure writer Robert Kirkman. Invincible had just started publication, so at this point the bulk of Kirkman’s work was Battle Pope.

This short series was mostly a deconstructionist one, showing super-hero work as banal salaried fare. It then veered toward the same subgenre as Invincible.

There isn’t that much to say about Bolt, so I’ll seize the occasion to provide a recap about the Capes, Inc. history.

Why isn’t there much to say about Bolt ? Because the Capes characters are purposefully generic and derivative. On the other hand, such generic hero types are what some stories need. Say, you just need some guys in the background who come help mop up, or get mind-controlled by the bad guy, or the like.

The Capes material was eventually established as taking place in the same universe as Invincible.

During the original three-issue run, my impression was that it took place in the “Larsenverse” instead. Since the Invincible Universe didn’t quite exist yet.

It later became clearer that there exist versions of early Image characters — but not the Wildstorm ones — within the Invincible Universe. The ones who most often crossed Bolt’s path were Savage Dragon and SuperPatriot.

Bolt is superhumanly strong and durable. Our rough estimate would be “Class 15” or “Class 20”, but there isn’t much to benchmark him.

He also heals faster than normal people. This seems to be a normal side effect of his strength.

Bolt is experienced, smart, confident and a robust hand-to-hand combatant. He has more Hero pointsDC Heroes RPG concept expressing narrative importance/immunity than normal for his weight class, and he knows it.

Though he generally fights toe-to-toe, Bolt has a track record of coming up with good tricks when outmuscled.

His confidence, good looks, and sense of style make him one of the most popular Capes employees.

Cape workers usually patrol in pairs, police-style, but in featureless brown SUVs. These get smashed a lot.

Two of the Capes, Inc. employees acquired some texture and originality later on. These have their own writeups — Kid Thor and Knock Out.

Other recurrent Capes, Inc. employees frequently work alongside Bolt. But there just ain’t enough data for any sort of writeup. 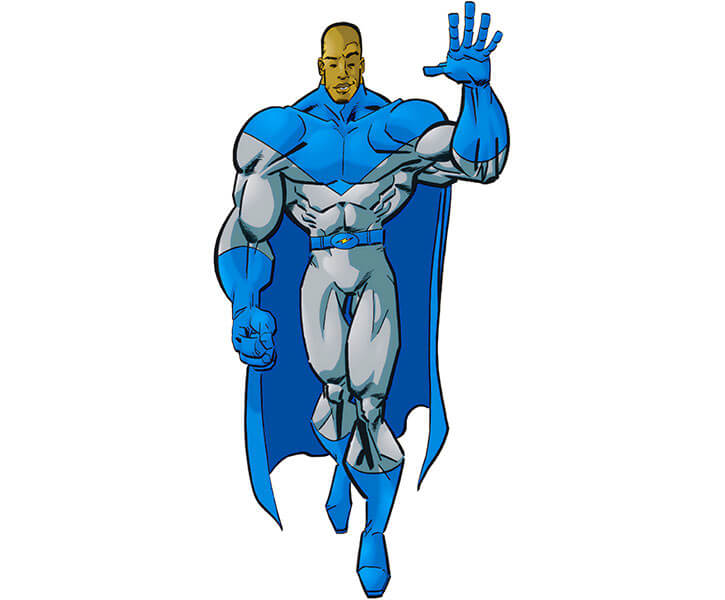 Bruce was once hit by lightning. This somehow granted him superhuman strength and durability.

He could thus move up to become a Capes, Inc. employee. He pretty much hit the American Dream – nice income, big suburban house, loving family, steady job, an occupation bringing him respect based on his abilities, etc..

Bolt mentioned that the Blade movie wasn’t out yet when he decided on his super-hero name. He also appears as a Capes, Inc. employee in one flashback where Atom Eve (Samantha Wilkins) seems to be about 14. Therefore, he likely joined circa 1996.

Founded by a trio of World War II heroes, Capes provides superhuman services and security as well as bounty hunting and crisis response.

Capes employs a roster of super-humans. But it’s not an easy business and the company often experiences financial stress.

In particular, Capes, Inc. took terrible casualties during the 1987 attack of Chronodile (who’s reminiscent of the Sphinx) – even with Omni-Man joining the effort. The heroes for hire only prevailed when Capes employee Captain Cosmic shunted himself and Chronodile into the future.

Bolt himself is a respected and popular Capes employee. He’s a pal of the old guard at Capes – including the HR director, the semi-retired Commander Capitalism.

In 2003, Capes, Inc. went through major upheaval. Their founder Big Brain, who had supposedly lost his powers after World War Two, was more powerful than ever. He triggered a crisis, all Chief-like, so that Capes, Inc. would prove its worth. And receive bigger subsidies ensuring it’d stay in the black. 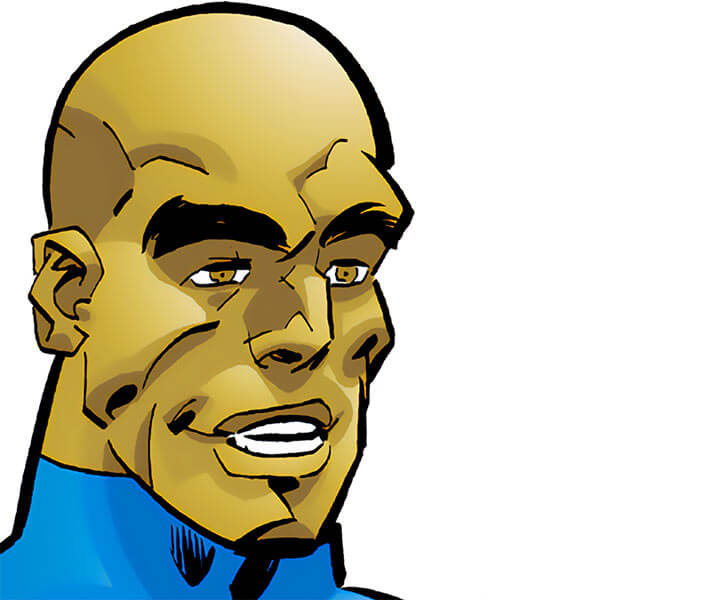 The brief rampage from Big Brain and his Nazi cyborg host body left several Capes employees dead, and many more wounded. But it worked – Capes’ budget was considerably improved.

In the fracas, Big Brain killed one of the Meteor Twins – the heroes who had been his partners since all the way back to the war. The surviving Twin, Marshall Winslow, became Cape’s new chief executive.

It seems that Bolt eventually moved to a field leader position. He appears to head the main Capes team, but one or two other response teams exist.

It later became apparent that part of the subsidies meant that national security mastermind Cecil Stedman gained a slowly-increasing amount of control over the company. As a result, Capes, Inc. employees increasingly did nationwide crisis response.

In 2006, the gigantic Chronodile returned from his time displacement – three years after Captain Cosmic did. This turned into another bloodbath for the National Guard and Capes, Inc. – who were completely outmatched.

Marshall Winslow, the surviving Meteor Twin, consumed the ashes of his dead partner. For a short time, that made him far mightier than the Twins had been, even as a duo. As Meteor Master, he slew Chronodile – then left for deep space.

Commander Capitalism, having the most seniority, became the head of Capes, Inc.. However, he was often seen in the field despite his age – perhaps because the company couldn’t replace its losses.

(It even seems possible that Cecil Stedman, or another government representative, took over the leadership of Capes, Inc.).

Bolt’s partner, Kid Thor, nearly lost a leg to Chronodile. He spent months in the hospital, during which Bolt was partnered with Captain Cosmic.

The Actioneers later returned to life, when Zechariah was destroyed. They seemingly continued to be occasional allies for Bolt and the rest, with Cecil Stedman’s agency providing coordination.

During the mid-2010s, after Robot (Rex Conners) took over the Earth, Kid Thor and Knock Out were slain. But at this point a lot of time travel was taking place, so who knows. 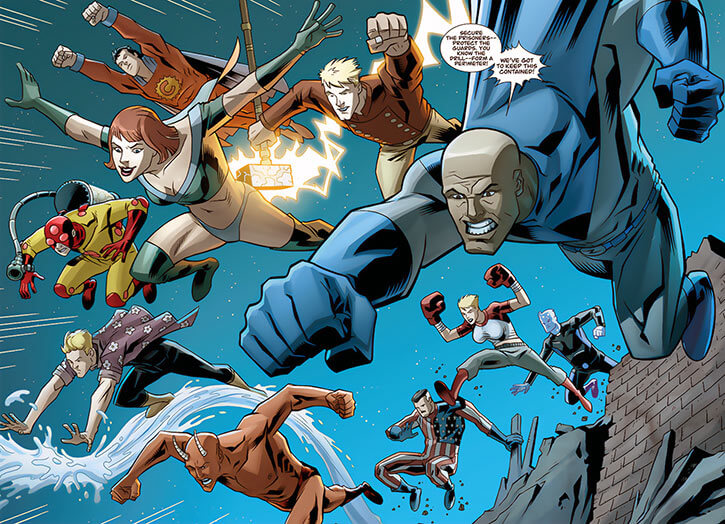 Back during the mid-1990s, Bolt had a horseshoe moustache. So now you know.

By the 2010s, Bolt was wearing designer sunglasses increasingly often. This seemed intended to make him look a bit less generic.

Bolt is a cool guy. He has a nice middle-class family with a loving wife, and he’s a recognised professional hero.

He has an honest yet suave style. In combat he talks like a comic book “good cop”, advising to surrender, pointing out how escalating the situation is not worth it, etc..

He’s seen a lot of odd superhero comic book things, such as people coming back from the dead. He takes it all in stride, to the point of sounding blasé.

Though several of his friends are aged men, he doesn’t share their oft-antiquated views about society. Particularly when it comes to women. 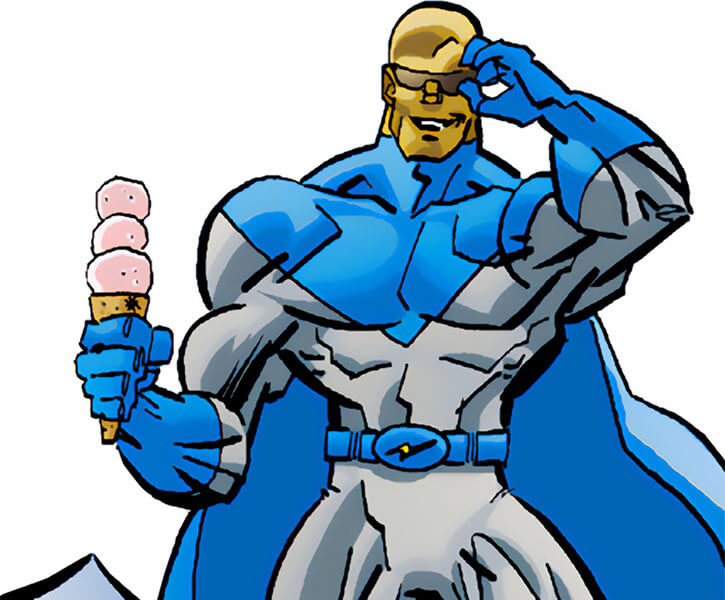 “I wanted to go by ‘Black Samson’. But when I was hired at Capes, they told me the only popular Black heroes had lightning names… Storm… Black Lightning… Static Shock… ‘Bolt’ seemed like a good idea at the time.”

“I’m gonna need to get back pay for the last hour. I had to bring in some joker called ‘Medallion’ on my way over. The cops can back me up on this.”

Dependants (Family), Misc.: Bolt must eat twice as much as normal.