Bonk is one of the Jokerz, a colourful Gotham street gang. These guys appeared in Batman Beyond. This well-regarded 1999-2001 animated series took place in a possible future of the animated DC Universe.

Bonk in and of himself is uninteresting. The only reasons he gets a writeup are:

Bonk is pretty much a thug with above average brawling skills.

Oh yeah, and he can pilot air vehicles. Just not all that competently.

The Jokers have no connection to the criminal master mind The Joker who terrorized Gotham City in an era gone by. Well, other that the Dee Dee twins who don’t seem to be aware just how close to the original they are.

It seems highly likely that they merely grew out of the mythos that the laughing man had created. That said they are just a bunch of misfit teenagers with a psychotic clown theme who terrorize normal citizens with mostly petty street crimes.

Bonk was one of the few members to recognized as elite. His brawling skills most certainly due put him a notch above the others. But given the fact that he is hopelessly incompetent in almost every other area it is likely that he did something in his previous career as a criminal to establish his street cred with the gang.

The original Joker came back to haunt Gotham City decades after his alleged death. He saw these foolish and impressionable thugs as easy recruits. He then sent them on a series of thefts to steal the technology he needed to put it in his terms “once again give this town a wedgy.”

The thefts proceeded smoothly at first. At least until the new Batman (Terry McGinis) got wise to what was going on and began interfering with their plans. When the Jokers showed up to steal more technology Batman was waiting for them.

After a brief scuffle the Jokers attempted to make their getaway with the stolen goods. But the theft was botched largely because Batman was able to taunt Bonk into attacking him rather than making a clean getaway. Despite this the Jokers did manage to escape, but without the loot.

After this attempt Bonk got angry at the Joker and challenged his authority. The Joker didn’t take this threat lightly. He resolved the matter by shooting Bonk through the heart with a bang flag. He then had the Dee Dee twins dispose of his body. Thus putting an end just one more incompetent criminal trying to play in the big leagues.

In the alternate future Bonk was shown to be among Chronos’s thugs.

He seemed to be more or less the same generic thugs upgraded by superpowers. Bonk seemed a bit more mellow and level headed, but not by much.

Bonk is a large muscular thug with no hair, chalky white skin, and a permanent scowl affixed to an already unpleasant face. It is not know if this is just a costume or his real face.

He wears tattered black overalls, with a red long sleeved T-shirt underneath and black boots.

Again not really much to set him apart from other basic thugs. He’s a street thug who wants money and power, but is too stupid to think of anything remotely original other than petty street crime. Batman was easily able to goad him into taking stupid risks and to top it off he challenged the original Joker out of blind arrogance and stupidity.

So he basically served as just one more thug to get thrown into the meat grinder of a gritty and uncaring world.

The Joker: “Why in my day…”
Bonk: “In your day ! Ever since you conned your way in here it’s been your day this and your day that.”
Chucko: “Bonk ?” (trying to calm him down)
Bonk: “Your day is over old man ! Even if you are who you say you are and personally I think you’re a fake !”
The Joker: “Ah, brave new world that has such putzes in it.”
Bonk (to the other Jokers): “He’s got us running around ripping a lot of geek junk, but no cash. He won’t tell us what his plan is – if he even has one ! I-WANT-OUT !”
The Joker (points a toy gun at Bonk): “If you insist.”
Bonk: “Hey man, take it easy. I was just kidding.”
The Joker (pulls the trigger and a ’bang‘ flag comes out): “So was I.” (chuckles a bit)
Bonk: (breathes a sigh of relief and the Joker shoots him through the heart with the bang flag)
The Joker: “Whoops, no I wasn’t.” (tosses the gun away) “That’s also how we did it in my day.”

Drawbacks:
Creepy Appearance, SIA (impulsive action), Serious Rage. It’s possible that the Creepy Appearance Drawback is just a costume to scare people. But we never really seem him outside his Joker getup so it’s kind of hard to tell.

Equipment:
Yeah he’s probably got something. Nothing too wild, but feel free to pinch things from the various other Jokers writeups that aren’t too character specific.He gets so little screen time and he’s mainly the group’s strong-man brawler that he doesn’t appear to regularly use anything other than…

Levi-lift [STR 07 BODY 06, Flight: 06, The pilot can sub their Vehicles (air) for it’s Dex (as per usual).
Also with a +2CS trick shot the pilot can use it to grapple and/or crush]. This is basically a flying futuristic forklift. Bonk and the other Jokers briefly boosted a few of these at the beginning of Return of the Joker. They were wrecked shortly after when Batman foiled their theft attempt.

Drawbacks:
Creepy Appearance, Serious Rage. It’s possible that the Creepy Appearance Drawback is just a costume to scare people, but we never really seem him outside his Joker getup so it’s kind of hard to tell.

Equipment:
None, but he’s likely to have access to plenty of cool toys because of his connection with Chronos – although whether he’s smart enough to use them when he needs them is subject to debate. 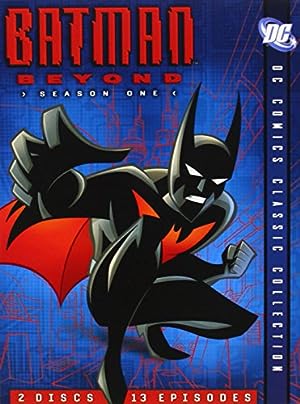 Batman Beyond TV series and films 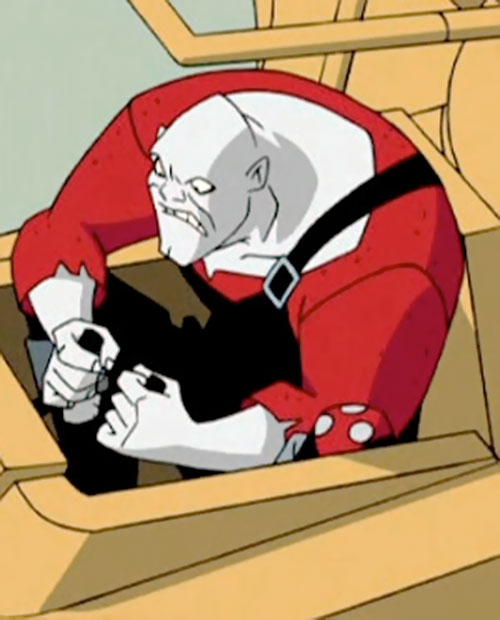