Milestone Comics was one of the more interesting new super-hero publishers that popped up during the comics boom of the early 1990s.

One of their higher-profile books was the Blood Syndicate – heroes organised as a street gang in a majority African-American city.

Martin Berger has the ability to change into a humanoid man-sized rat. In this form he has much greater physical prowess and strength and can communicate with rats.

Boogieman has established an excellent rapport with the local rat population. They routinely inform him of unusual situations, and will track him down even in his human form.

His years of illicit activities have also given Martin some skill as a thief.

Boogieman is a Bang Baby. That is, a gang member who received superhuman powers in the wake of the Big Bang. The Big Bang was supposed to be a rumble between all of the major gangs of Paris Island to settle their turf wars, once and for all. The Dakota City Police Department learned of the impending showdown and developed a special tear gas that also contained a radioactive marker.

Their plan was to use the gas to break up the Big Bang and then trace the gang members down the next day by tracing the radioactive “tags.” Instead, most of those exposed to the tear gas died. The handful of surviving gang members that lived had all developed superhuman abilities.

One of the Bang Babies, Rolando Texador, took the name Tech-9 after his favorite type of pistol. He gathered his fellow survivors together with a proposal. Tech-9 wanted to form a new gang, the Blood Syndicate, to achieve substantive positive social change.

They took over an abandoned door factory, which they simply dubbed The Factory. From there, the Blood Syndicate smashed crack houses throughout Paris Island. While ridding the neighborhood of the dealers the used money captured in these operations to fund their activities. In the course of their work they would acquire new members, and put an end to many threats in Paris Island.

Boogieman joined the team soon after they formed. He proved himself by defending Brickhouse when she was ambushed by a rival group, and then battling alongside the Syndicate. When the Syndicate learned that Boogieman’s alter ego was White, they became suspicious of him. Boogieman demonstrated himself to be a loyal team member and their doubts eventually faded (no pun intended).

In the wake of the original Syndicate’s disbanding, former Syndicate member-turned-criminal Holocaust began forming a new Blood Syndicate. This version was more sympathetic to his schemes. He recruited villainous Bang Babies as well as some former members of the first Syndicate. He then arranged a confrontation with Icon to remove that hero as an obstacle to his plans. 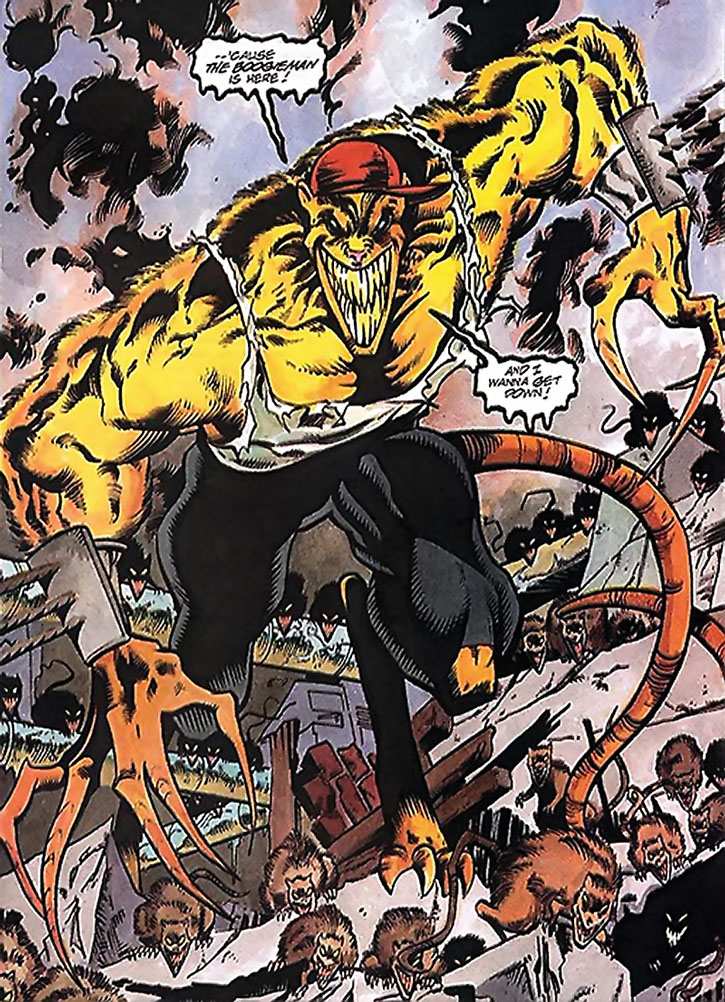 One result of the Final Crisis series was the integration of the Milestone Universe into the mainstream DCU. The cataclysmic events therein destroyed the universe in which Milestone took place. But the powerful psychic Dharma was able to harness the power of Rift, the powerful being behind the original Milestone/DC crossover. This saved his universe’s inhabitants.

This process was hindered by Starbreaker’s attempt to steal Dharma’s powers. It is thus on-going. Dharma stated that it would be months, if not years, before it was complete. This was likely also a metatextual statement on the incorporation of the Milestone characters into DC Comics’ mainstream titles.

In his human form, Martin Berger is a non-descript Caucasian teenage boy.

As Boogieman, he is a man-sized humanoid rat covered with short brown fur and usually wears black spandex jogging shorts, black wristbands, and a red baseball cap turned backwards with the word “Slam” written on the front in white.

Though he is bipedal in his rat form, Boogieman has a hunched posture, and runs using his arms and legs.

Martin is a typical teenaged boy. He’s protective of his friends, thrilled by adventure (especially the adventures that come with being Boogieman), and reluctant to do his chores at home.

Boogieman was particularly excitable. He tended to speak in rushed shouts when feeling anxious.

Boogieman can be used individually in any urban setting, and might be very useful in a scenario where the PCs have to enter the sewer system. He might be able to reason with the Ratcatcher.

Advantages:
Area Knowledge (Paris Island, Dakota Sewers), Expansive headquarters (The Factory, though the Blood Syndicate may have a new base of operations after its disbanding and subsequent reformation), Lightning Reflexes. 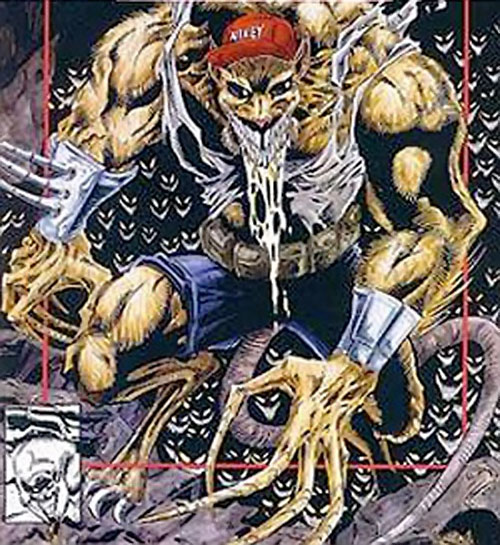