Bubblegum Crisis (バブルガムクライシス) was a 1987-1991 cyberpunk  animé . It is a minor classic of the genre, especially since from a Western point of view it is an early example (the imports weren’t all that back then, especially for genre fiction).

BGC features an all-women team of vigilantes with special power armour  in a very late 1980s dystopic future. They often take on out-of-control robots that the police lacks the firepower to destroy. Which leads us to…

Boomers are cybernetic constructs, of varying levels of power and sentience. On the average, the most common Boomers are less intelligent than humans. They are roughly on par with domestic dogs or cats, except in specific areas they are programmed for.

In addition to their technological components, Boomers actually have organic components – Sylvie used human blood to help keep Anri alive, and it worked. This implies that the more advanced specimens may be more like cyborgs than robots.

These organic components have their own specific secretions similar to hormones, which can cause erratic results if certain hormones are produced in unusual amounts, or unusual proportions. Thus, it is illegal to modify a boomer for sexual purposes (a “sexaroid”).

Finally, many Boomers (especially combat types) have a rather horrific ability called ’Boomer fusion’. They can basically graft technological constructs onto themselves to augment their own capabilities. One combat boomer in the first episode of the show, for example, grafted on a rather large autocannon.

This power enables its user to absorb a certain amount of external mass into himself, while retaining the original function of the mass absorbed if technological in nature. The AP’s of the power determines the maximum amount of mass that can be absorbed. The AP’s plus 10 is the duration such matter can be absorbed.

The power user touches the mass to be absorbed, and rolls his Body as AV/EV against the target’s Body as OV/RV. If the target is moving, the roll is Dex/Body against Dex/Body. Full RAP’s must be scored to fully integrate a given device.

With a total of 8 RAP’s, it has successfully incorporated the cannon. Since it weighs 200 lbs, it can only attempt to fuse with another 100 lbs (1 AP) of matter.

While most fusion-capable Boomers have a significantly limited amount of mass they can Fuse with, others seem to have no real upper limit (or at least an astronomically high limit).

Advantages:
Scholar (specific ’occupation’, such as Maid or Chef).

Often used as assistants, walking PDA’s, maids, babysitters, and the like. They can also be found with internal useful devices such as a coffee maker (as a restaurant waitress), or a holographic scorecard (as a caddy), for example. Rarely go berserk, but not especially dangerous when they do unless underestimated.

A power booster is available that augments this specific Boomer model’s Strength to 06. Rarely go berserk, but easily dealt with by AD Police officers when they do. Not all Labor boomers are perfectly humanoid. Assembly line workers may have tools for hands (Claws: 05 or Sharpness (STR): 02), or a chef Boomer might have four arms to prepare food faster (Extra Arm (x2): 05)

Advantages:
Up to three Scholars.

Often found as Executive Assistants, ’Android‘ Boomers are almost always very attractive, capable of simulating emotions, and occasionally anatomically correct. Though OFFICIALLY, of course, “sexaroids” are illegal. Android Boomers used as sexaroids often go berserk and have to be put down by the AD Police.

Also, “Sexaroid” Boomers are often augmented with devices intended to heighten sexual activities, such as exotic pheremones, or eyes that can emit faintly hypnotic waves that stimulate the pleasure centers of the brain.

Advantages:
Appropriate Scholar (such as Mechanics or Welding).

Used in heavier fields where the Labor Boomer is not quite strong or durable enough, such as heavy lifting. It also has a modular arm system. “Garbage” Boomers have their forearms replaced with forklift forks (+1 Str), while others might have a power wrench or a welding torch (Flame Project: 07, no range).

Built around the concept of raw strength, construction Boomers can be more than a handful if they go berserk. But they are invaluable in all forms of construction – whether building a new skyscraper, or repairing the damage from the latest Boomer attack.

These Boomers are designed to play the various popular contact sports in ways too dangerous for humans to think about – such as football with spiked shoulderpads, rugby with razor-sharp blades on the ball, or even boxing with spiked gloves. Their superior agility compared to the typical Boomer makes them dangerous to handle for the AD Police, but not an insurmountable challenge.

Note that every single one of these non-combat types of Boomers gain the power Adrenaline Surge one AP higher than their Strength when they go berserk. A simple Waitress Boomer was able to out-muscle three AD Police officers, killing one of them, before being dispatched (with significant overkill on the order of another 300 high-caliber rounds or so to its unmoving husk).

This surge only feeds their Strength. This power is not accessible when not berserk. Combat Boomers do not gain this power, as they already are accessing the Boomer equivalent of “adrenaline” for their listed power levels.

A “mannequin” style boomer, designed for better interaction with the general public. They have no built-in weapons, but can operate a wide variety of hand-held weaponry and pilot most Police vehicles. The typical pilot of a Police vehicle heavier than a squad car is usually a Boomer, in fact.

Their relatively simple design, while remarkably intelligent, is much less likely to go berserk than other Boomers. Even if they do go berserk, they are easily handled by even the Normal Police with the assistance of those Police Boomers that do not go berserk.

Bonuses and Limitations:
Heat Vision has a 1 AP diameter effect; Flight has a maximum altitude of 0 AP’s over a surface; Energy Blast and Heat Vision have no AV.

The most common kind of ’berserk boomer‘ that is beyond the AD Police’s ability to handle. The BU-55c is a formidable battlefield asset with the firepower of a squad of tanks (often exaggerated as ’a company of tanks’). A berserk BU-55c can cause incredible damage on its own, but they are rarely found alone.

In addition, their ability to be disguised in a realistic human disguise (Perception test against an OV/RV of 4 to identify a figure as a Boomer and not human). In human guise, the Boomer cannot use its Flight, Jumping, Energy Blast, Heat Vision, or Fusion. Any damage will render the disguise ineffective, but it still requires one full phase to resume its natural form (whether the disguise is damaged or not).

This disguise cannot be replaced by the boomer, but must be added at either a Genom facility, or a field facility with the proper tools and materials.

Bonuses and Limitations:
Heat Vision has a 1 AP diameter of effect; Flight has a maximum altitude of 0 AP’s over a surface; Energy Blast and Heat Vision have no AV.

Related to the BU-55c, Female Combat boomers are more agile, yet not as strong and less durable, than their ’male‘ counterparts. They also lack the point-target mouth cannon.

They are more often used in espionage and recon situations where their smaller size makes them more efficient than the standard model. They have the same camouflage ability as the BU-55c, including the limitations of their disguised mode.

Bonuses and Limitations:
Projectile Weapons (15 AP) has no AV; Flight has a maximum altitude of 0 AP’s over a surface; Skin Armor also applies to resist Fusion.

Much larger, stronger, and tougher than the BU-55C, the BU-12B is a front line combat unit with no disguise capabilities. It mounts a 12.7mm gattling cannon armed with armor piercing rounds fired at hypervelocities as well as a full gauss cannon in its right ’gun arm‘, while its overlarge sensor head has multiple redundant backups.

Despite its volatile position and combat capabilities, BU-12B’s actually don’t go berserk as often as other combat models.

Bonuses and Limitations:
Energy Blast has no AV; Heat Vision has the listed AV of 7; Skin Armor applies against Fusion.

Called ’Dobermans’ for their relatively low intelligence, these Boomers are optimized for space combat. Since they have little intelligence and are relatively imperceptive, they are programmed simply to viciously attack anything that is not broadcasting a recognized IFF code.

Thus they are most often deployed once an enemy has been sighted, and guided back to their ’kennels’ once combat is over. Its strictly regimented ’life‘ and simple mind mean Dobermans rarely go berserk.

Bonuses and Limitations:
Flight has a maximum altitude of 0 AP’s over a surface; Energy Blast has no AV; Fusion can replace Body if mass absorbed has exceeded the Boomer’s Body (yes, this DOES mean that it becomes easier to absorb more mass).

Drawbacks:
If Fusion has replaced Body, finding and destroying the brain of the Boomer (still in its original shell deep within) can destroy the Boomer. It has the original body’s Skin Armor and Body.

While most combat Boomers have at least a limited amount of Fusion, these variants on the BU-55c models have nearly unlimited Fusion potential! They can fuse with nearly unlimited amounts of inorganic matter, adding it to their own mass and increasing its durability exponentially. They thus absorb everything from skyscrapers to even entire cities.

In these circumstances a mission must be made to penetrate the new “body” of the Boomer with a strike team to find the Boomer’s original body somewhere within and destroy the brain. Such models are highly illegal even in warfare, as a Fusion Boomer tends to go insane if too much mass is added too quickly.

Note that there were specific model Boomers with even greater combat capability than the Dobermans, such as the Hyperboomers used by Largo, or the ’Boomeroid‘ (cyborg) Colonel N J Lando. These will either have individual writeups (such as Colonel Lando), or will be collected by related types (Largo’s Hyperboomers, or his later ’Largoboomers’).

Source of Character: Bubblegum Crisis (original series) and Bubblegum Crash, some material taken from the BGC RPG by R Talsorian. 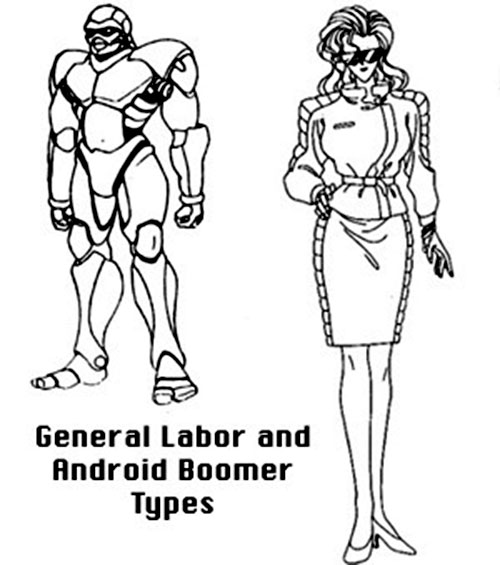 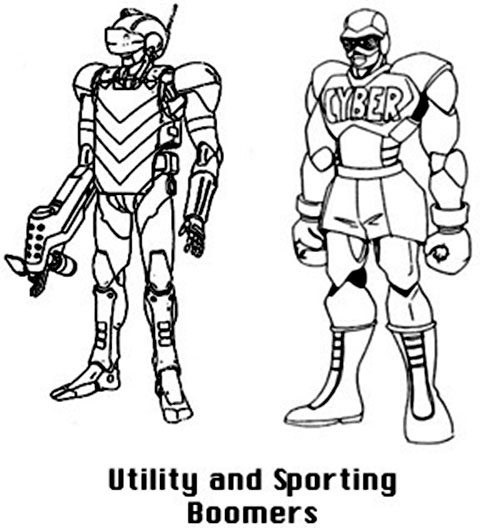 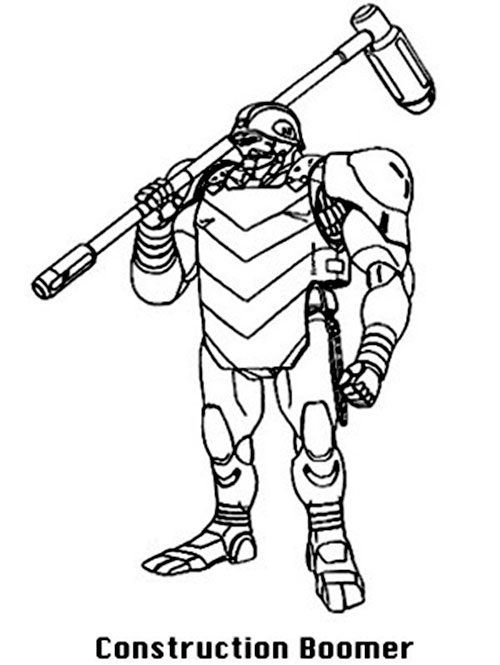 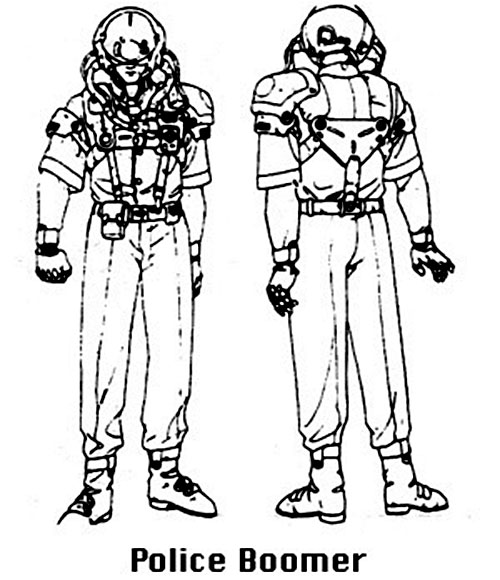 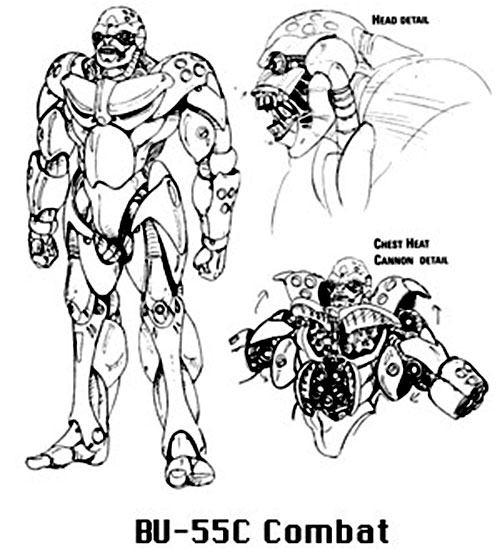 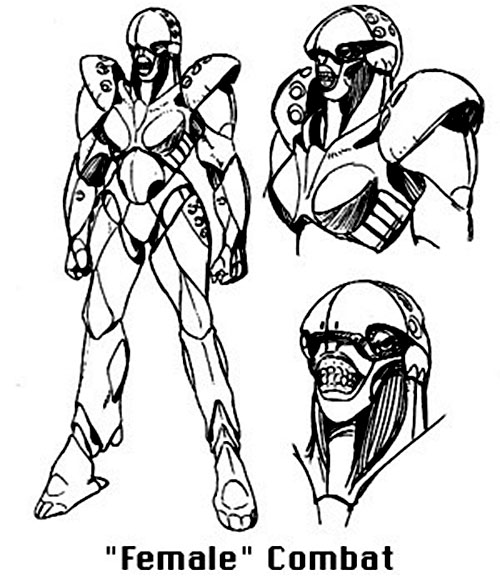 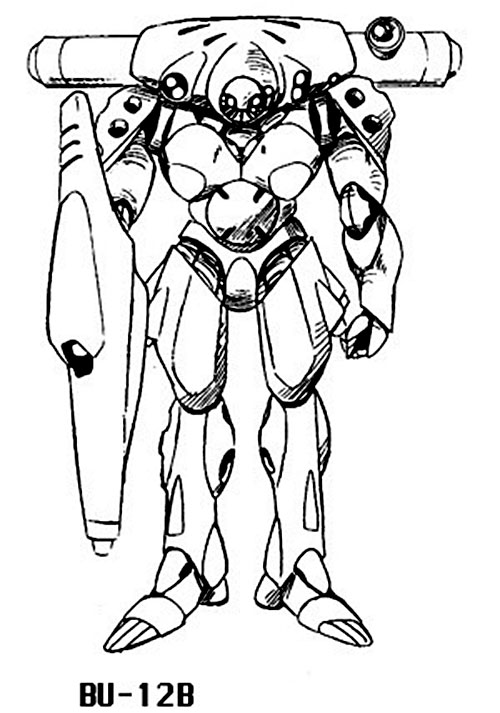 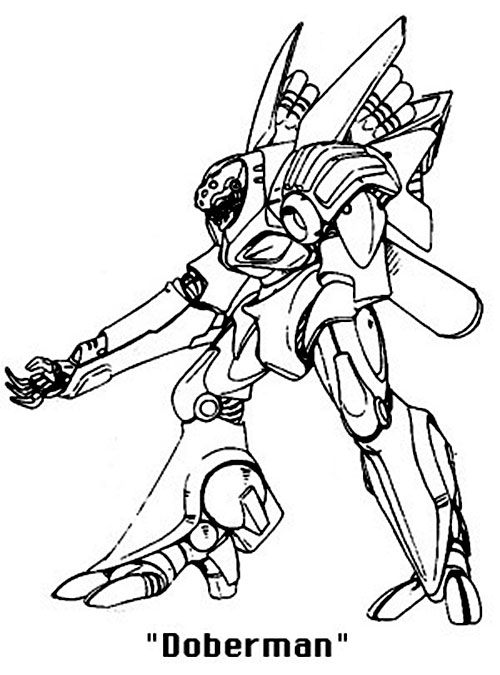 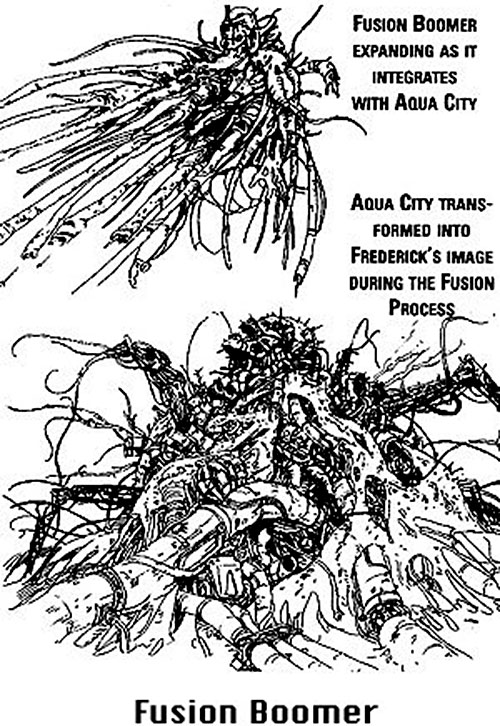