Though most demons in the Buffyverse are simply strange-looking bricks  in supers terms (stronger and tougher than a human), Boone stands out in this category.

He is also a superb hand-to-hand combatant, challenging even accomplished and well-known fighters such as Angel. Though we never saw the fight, Angel was seen afterward bearing some of the worst bruising he had ever had after a battle.

Boone encountered Angel in the 1920s in Juarez, where they had a disagreement over a senorita. Boone had been “working on a three-day drunk” (a three-day drinking binge) and was not at his peak. But that did not stop him from calling Angel out.

They fought for the next three and a half hours until the sun rose. Boone stopped the fight at that point since letting the sunlight kill Angel would have been dishonorable.

In early 2001 Boone was relaxing in a bar in Los Angeles when he found about a local demon snitch named Merl. He was helping the vampire with a soul. Recognizing Angel in the description, Boone tracked Merl down and found out about Angel’s feud with the law firm Wolfram and Hart.

Boone then approached Wolfram and Hart. He offered to work with them for free in order to fight Angel and settle the question of which one of them was the better fighter.

At that time Wolfram and Hart was using charity work with the East Hills Teen Center to build up their public image while skimming funds from the donations. Angel was trying to warn Anne Steele, the manager of the center, about Wolfram and Hart’s evil intentions when Boone attacked.

Angel showed up next at the charity ball that Wolfram and Hart was holding on behalf of the East Hills Teen Center. He and Boone fought briefly before revealing that they’d been working together the whole time. Using the distraction of the fight, Anne had approached the charity ball’s multi-media presentation center with a tape in hand.

The tape is a lie

McDonald and Morgan of Wolfram and Hart panicked, thinking Anne had the tape Angel had mentioned, and ran frantically through the crowd. They were unable to stop Anne, but the tape turned out to be a bunch of home movies made by Angel’s friends goofing around in front of the camera.

McDonald’s and Morgan’s panic drew unwelcome attention though, confirming for Anne and others that the law firm had crimes it feared would be exposed. To add injury to insult, Boone used the confusion with the tape to steal the take from the charity ball.

Though Boone had gotten away clean with over two and half million, he returned to Angel’s office, throwing the money down as a stake for their fight. Boone just had to know which one of them was the better fighter.

The details of the fight are unknown, but a victorious albeit bruised and battered Angel presented the blood-splattered loot to Anne later that night.

Boone is a broad-shouldered humanoid with weather-beaten blue skin, pinkish lips and fingernails, and short brown hair over a high forehead. Centered above and below each eye there is an elongated triangle pointed up and down respectively and curving slightly inward, looking much like the eye lines on the British Theatre’s faces of drama or those on Lobo’s ugly mug.

The lines above Boone’s eyes are two inches long while the marks below his eyes are only one inch long. These marks are black and slightly sunken into Boone’s skin, possibly meaning that they are brands or scars.

Thanks to the cowboy motif Boone has adopted, he dresses somewhat like a desperado from a western movie, with a dark brown duster and simple clothing in earth tones. When he is calling someone out to fight he will extrude his tentacles around his hands and engage in a classic stare-down just like a gunslinger challenging an opponent to a shootout.

Boone’s voice sounds a bit like that of Kirk Douglas or Jack Palance in their early westerns, though a bit deeper and without as much of a drawl. When Boone is in a fight he doesn’t say a word but the battle is punctuated with the clang of his hand guards as he pummels his opponent and blocks attacks.

Though he is not laconic, Boone does tend to speak in short, direct sentences. He never raises his volume or displays much in the way of emotion other than mild amusement.

He is apparently immortal and with that in mind he has vast reserves of patience — if he cannot do something now, he knows that he will have time to get around to it later.

While conversing with people Boone usually walks around the room examining whatever objects strike his fancy, picking up the more intriguing ones for a closer look.

Boone has a touch of the polite Southern gentleman about him, too. When he and Angel fell off a balcony during one of their staged fights, the more durable Boone tried to cushion the fall for Angel. When he was speaking to Lindsey and Lilah at Wolfram and Hart he introduced himself to Lilah by asking if she was the “better half” of the team.

Boone has a strong code of honor when it comes to fighting. He will not use an opponent’s vulnerabilities against him. For example, during his first fight with Angel, Boone stopped fighting at sunrise because he felt that letting the sun finish Angel off would have been shameful.

At the same time, if he sees someone as a worthy opponent he has a difficult time walking away before he knows who the better fighter is. He can set this aside when necessary, but will come back to it later on.

By the same token, Boone doesn’t expect someone to fight him without having a reason. If necessary he will even offer a prize of some sort as he did with Angel.

It seems unlikely that Boone will insist on fighting to the death. He has a relaxed attitude towards such contests and Angel would have likely been more visibly upset about their rematch if he was being forced to fight an old friend to the death.

In addition, as noted above, after the fall from the balcony during their second staged fight, Boone not only tried to protect Angel from the brunt of the impact, he also expressed genuine concern for Angel’s well-being.

He actually fretted somewhat over the possibility of Angel having been seriously injured. Which would be odd behavior indeed for someone who took hurting or killing people lightly.

To put it simply, Boone loves a good brawl, but he is not so wrapped up in it that he will force unwilling parties to fight him (unless they did something to piss him off, anyway) or inflict more damage than necessary to win the fight.

This is one of the traits that sets him apart from more stereotypical sociopathic action genre “honor fighters” who have no regard for the wishes or lives of their chosen rivals.

Note that such characters would actually be at a disadvantage in fighting Boone. He can be knocked out normally but Killing Damage would be repaired by his Invulnerability, quickly putting Boone back in the game.

Boone can be inserted anywhere you need a metahuman or demonic thug, either working for someone else or running some sort of criminal scheme on his own. A colorful character like Boone might have an old rivalry or relationship with any number of characters in either the mystic or underworld communities.

If John Constantine ever ended up drinking down Mexico way he’d have likely drank the night away with Boone. El Diablo has probably had to kick Boone out of town after Boone went on a drunken tear at some point.

There’s also a possible relationship of some kind between Boone and Lobo. If Boone’s skin was white instead of blue he’d look like Lobo’s long lost cousin. They’re also both party animals with their own idiosyncratic code of honor. The biggest differences are that Boone is more refined and polite and lacks Lobo’s delight in sadism.

Boone and Bruce Wayne have some sort of past together. Maybe Boone was one of the innumerable experts in mayhem that Bruce trained with, maybe they crossed paths during a particularly esoteric case, possibly even both. This allows insertion of Boone into a modified version of the Knightfall storyline as follows:

R’as al Ghul breaks all the psychos out of Arkham Asylum to teach Batman a lesson about the ways of the world, hoping that in the process of quelling the violence Batman will realize that methods such as R’as’s for controlling people are superior to the world’s current state of chaos and join al Ghul.

Boone shows up in Gotham just as things are getting out of hand and agrees to help Batman for some form of payment.

After everything is over, Boone collects his pay in the form of challenging Batman to a fight, ’cause he has “gotta know” who is the better fighter. Boone takes Batman down (though not as brutally as Bane — that sort of unnecessary crippling is not Boone’s style), then tries his hand out as a crimelord in Gotham for a while.

Eventually Boone bags it and hits the road because being a kingpin is too much damn responsibility for a guy who likes to roam around the wilds.

Another possible twist: Boone breaks Batman’s back during their fight…by accident. Feeling responsible, he actually takes on the role of Bruce’s caretaker until he recovers.

Hilarity ensues as the Bruce, Alfred, and Boone run around searching for Tim Drake’s father like Bruce did in the original storyline. Boone and Alfred even form a strange friendship based around their mutual appreciation of etiquette and concern over Bruce.

During this time, there is also a horrible tragicomic incident where Boone tries to maintain the legacy by dressing up as Batman. Even as he starts putting on the fighting togs, he knows it is going to be a mess because he is simply the wrong sort of character for this. He will give it his best shot anyway because anything less would be disrespectful to Bruce.

For bonus points, he probably also ends up helping Catwoman on a heist for a cut of the loot while attired as BatBoone.

Though Boone never did so in the episode, it seems likely that Boone can speak Spanish. He has spent time in Mexico and it would fit in with Boone’s neo-Western theme of a desperado who spends a lot of time wandering south of the US border.

The Area Knowledge and Animal Handling Advantages and the Vehicles Skill were added for the same reasons.

I’m also assuming that even though Boone and Angel were secretly working together for most of the episode, their fights still roughly reflected their relative fighting ability. With Boone having superior strength and speed but ultimately losing due to having fewer Hero Points. 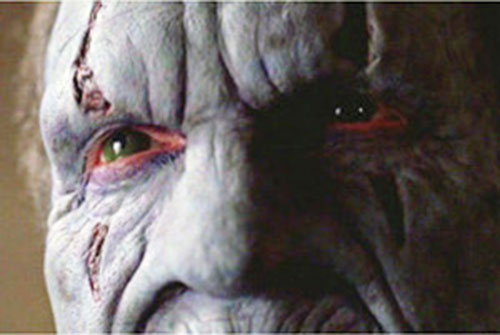 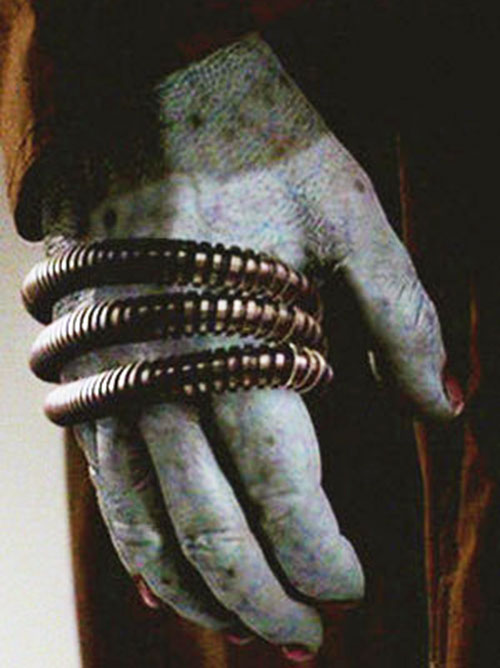