The Atlas Corporation, a cyberpunk-evil-militarised-megacorp-but-in-space, appears in the Borderlands video games series. Which started in 2009.

Like most Borderlands stuff, it isn’t particularly original. But this generic quality means that it’s easy to reuse bits and stats in TTRPG and other stories.

This article is based on the first Borderlands game. It doesn’t yet include most elements from Tales of the Borderlands and later stories.

You can read our primer about the Borderlands setting first if you want.

But you don’t have to — because of reasons, the Atlas Corporation profile is stand-alone.

The article is long enough to have time to listen to some music as you read… well, unless you’re listening to the article rather than reading it… so let’s have a cool bit of Jesper Kyd’s OST for the first Borderlands game.

It’s the atmosphere-setting tune, and it does a fine job at that.

Atlas was one of the megacorporations that came to prominence as humanity colonised space. Like most of its competitors it was present in numerous industries and services.

However, Atlas Corporation gradually fell behind. To avoid being ripped apart by other megacorps, they invested in moonshot projects  .

Unexpectedly, one paid off.

The only known other sapientCapable of intelligent reasoning species was long since extinct.

This civilisation was dubbed the Eridians. But what was left were but stone ruins on multiple planets. One can say that they seemed fond of decorated stone arches, but that’s about it.

Still, experts eventually managed to decipher the language, and draw conclusions about the society. But one gets the impression that it was seen as little more than esoterism about inert, dusty remnants.

Nevertheless, Atlas heard about research on the subject of Eridian Vaults. These allegedly were ancient alien caches. The corporation offered a big bounty to anyone who could locate such a Vault, and hoped for a miracle.

Thus were the first Vault Hunters created. And one of them, T. DeLeon, hit the jackpot. Though I don’t think tigers were involved. 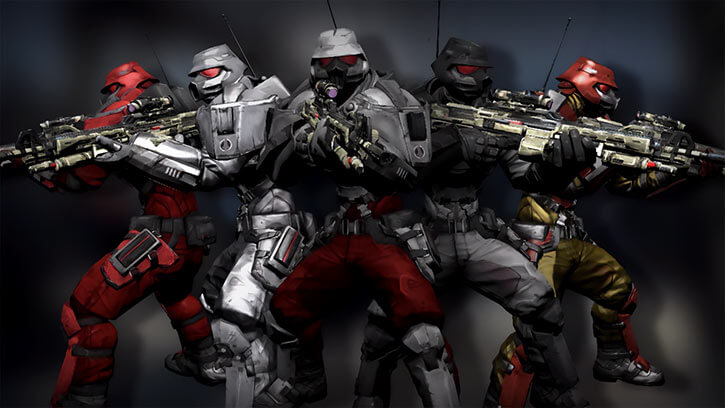 Eridian technology turned Atlas back into a titan of industry. In particular, it made it possible to imbue certain materials with releasable energy.

Borderlands being primarily about shooting guns, the applications of Eridian technology are mostly seen in bullets. Eridian-charged projectiles can erupt into corrosive, incendiary, concussive or electrical explosions.

Later on, Eridian stuff (“E-tech”) will be used to produce energy weaponry. And it is possible that some of the sci-fi tech seen in Borderlands (fast space travel, orb shield personal protections, digistruction…) were improved or made possible by what Atlas reverse-engineered.

The DeLeon Vault had been found on the planet Promethea. Atlas took over, and gradually turned Promethea into a phenomenal metropolis as money poured in.

Though this mass-produced armament isn’t equal to the top-notch, most expensive ordnance, it’s fine military gear. And quantity is a quality of its own. 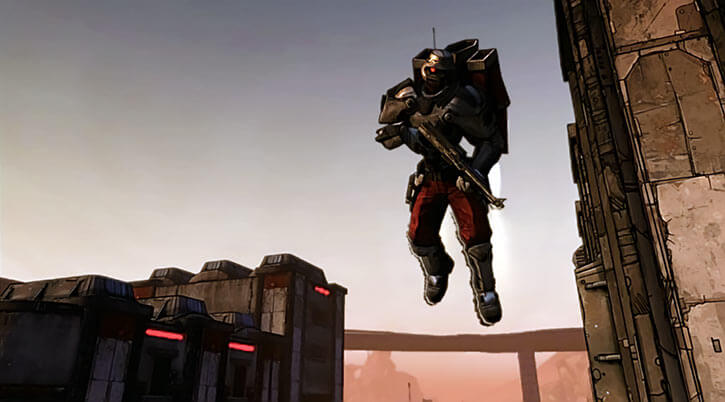 Humanity continued to wildly expand. But here, quantity seemed to have lacked quality. What we see of Human societies are cruel, dysfunctional, all-devouring plutocraciesGovernment by and for the wealthy centered on the megacorporations. Post-terminal capitalism, if you will.

(Same flavour text refers to “the six galaxies”, which would mean that Human expansion was vast indeed. FTLFaster than the speed of light travel seems necessary for this scale.)

Now back from Dickie’s meadow  , Atlas became a powerhouse. But other megacorps such as Dahl or Hyperion could still hold their own.

Looking for more Eridian Vaults became a thing. Freelance Vault Hunters proliferated. Funding for Eridian studies also developed, though the focus was on Vault detection rather than fundamental xenoarchaeology.

To prevent other megacorps from finding a Vault, Atlas often deployed the Crimson Lance to occupy colonies with Eridian ruins.

Atlas’ return to untold riches and power had been the product of a stroke of luck. Its managerial acumen remained below the “standards” of even its sociopathic, externalities-crushing competitors.

Over time, nepotism apparently became the norm among Atlas management. By the time of the first Borderlands game, an Admiral of the Crimson Lance was a literal 5-year-old. And this child seemed to have little in the way of supervision or education.

As it happened, this Admiral was responsible for the area that included the forsaken planet Pandora. Pandora had been mostly controlled by the Dahl megacorporation, who invested in investigating the Eridian ruins there.

But nothing came up, and Dahl pulled out.

Part of the decision was that the planet’s seven-year cold cycle had come to an end. Previously hidden wildlife came out of hibernation, and it was both deadly and ravenous. The costs of working on Pandora skyrocketed.

The convicts who had been shipped to Pandora as a labour force were simply abandoned. As were Dahl employees not deemed important enough.

Crimson Lance forces came in and fortified. But with the hibernation phase over, and with the ex-Dahl workforce having sunk in madmaxian chaos, securing parts of the planet meant heavy, sustained fighting. 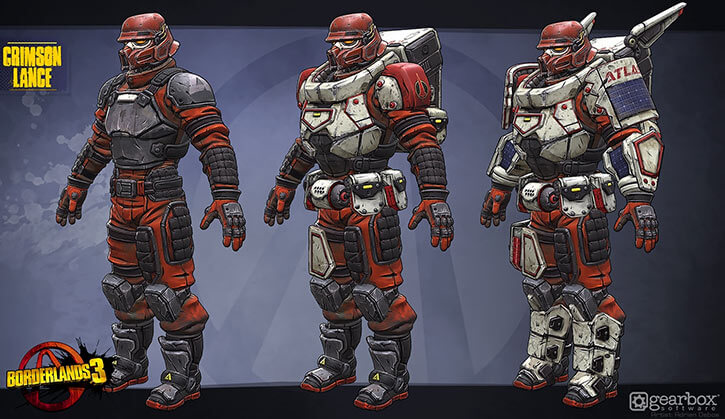 Leading the Lance on Pandora was the ever-verboseTalking a lot Commandant Steele. She correctly suspected that Dahl had been wrong, and there indeed was a Vault on Pandora.

Steele appears to have been a Siren, or at least a partial Siren.

(Sirens are some sort of mutant women capable of directly manipulating Eridian energies, as a super-power. Little is known about them, but it’s established that there never can be more than six Sirens in the universe).

A plate of calamari

Her abilities allowed her to track down the Vault more efficiently than planned.

In particular, Steele realised that the findings of insane archaeologist Dr. Patricia Tannis on Pandora were on the money. And, to everyone’s surprise, Steele’s energies allowed her to assemble the key to the Eridian Vault on Pandora.

(Atlas presumably didn’t realise that Steele was a Siren. The concept may have been almost unknown back then. And Steele likely hid her abilities from the corp.)

However, the discovery broke bad. *This* specific Vault wasn’t a cache, but a prison. An Azathoth  -like tentacled god, the Destroyer, had been locked within. The Destroyer had apparently been the cause of the Eridian’s extinction.

It destroyed Steele and her on-site forces. 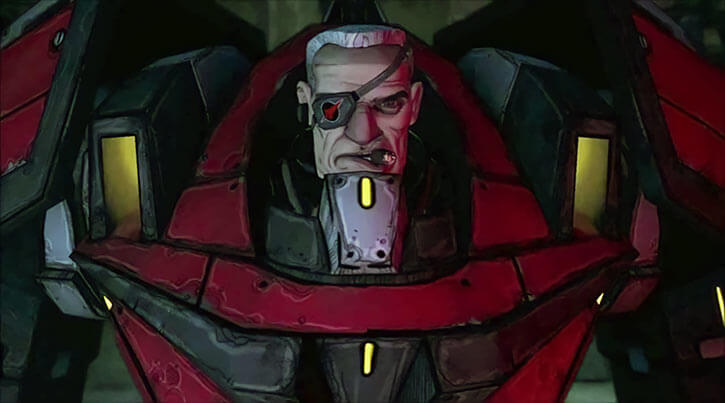 From there, things got even worse.

It was the Hyperion megacorp that waltzed in and reaped the benefits from the work of Dahl and Atlas employees. In particular, the opening of the Vault had revealed a new Eridian-related element on Pandora, dubbed Eridium.

After the Pandora disasters, Atlas Corporation apparently entered a period of grave turmoil.

One can imagine that there were financial raids, massive shorting, etc.. But little data is available.

The megacorporation was eventually taken over by an Hyperion turncoat, an executive called Rhys. It *seems* that he used ownership documents forged by Handsome Jack as part of a previous boardroom plot. 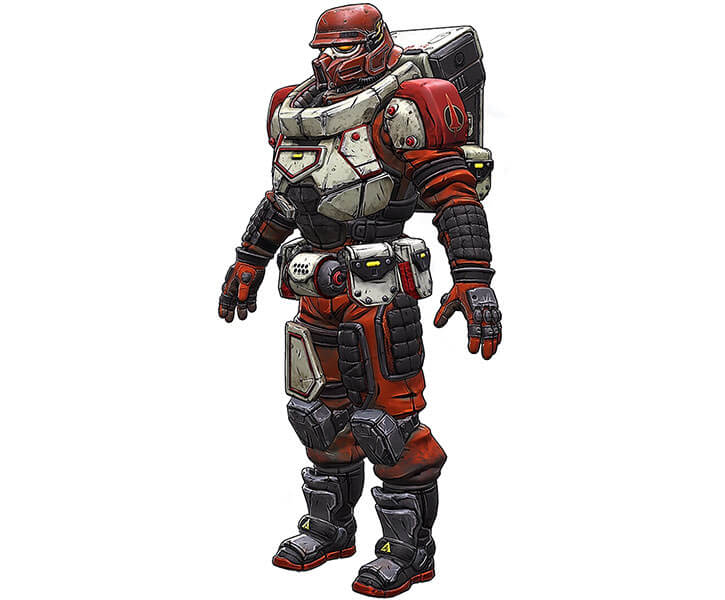 “Elemental component” is a shorthand to avoid rolling a Combined With attack since these guys are mooks. If the target’s RVs are different between the Ballistic Descriptor and the Descriptor of their element (Corrosive, Fire, Electricity), do a quick average and round in the attacker’s favour.

Engineers can deploy a Scorpio turret [BODY 05 INT 02, Projectile Weapon: 05, Force shield: 03, Weaponry (Self): 04. Note that the Scorpio can’t move around – no DEX. The Force Shield is applied to anybody taking cover behind the “wings”, though a Trick Shot can bypass it.]. It doesn’t seem as good as Roland’s.

Rocketeers have a big jet pack adding Flight: 05 to their body armour. Some also use a rocket launcher rather than a battle rifle. I hate them.

In Borderlands parlance, badasses are a variant, tougher specimen from an enemy type.

These are normally 15-30% larger than the baseline specimens.

At first glance this seems to be a gameplay convention, but in many cases (such as badass psychos) this seems literal. So we might assume that “badass” Crimson Lance troopers are genetically enhanced.

Add two APs of STR and BODY, one AP of Weaponry, and 7 APs of Damage Capacity (Physical).

These are massive suits of power armourStrength-enhancing body armour, like Iron Man’s, about the mass of a pickup truck. These aren’t too mobile, and are best suited for reinforcing a garrison, forward base, fortification, etc..

Each arm is equipped with a canister cannon – essentially a giant shotgun. These have bayonets to fend off melee attackers (say, skags).

There exist a few “badass” Devastator suits, with one more AP of STR, Claws and BODY and six additional Damage Capacity APs. General Knoxx used one such suit, though with his depressive death wish he kept his head exposed. 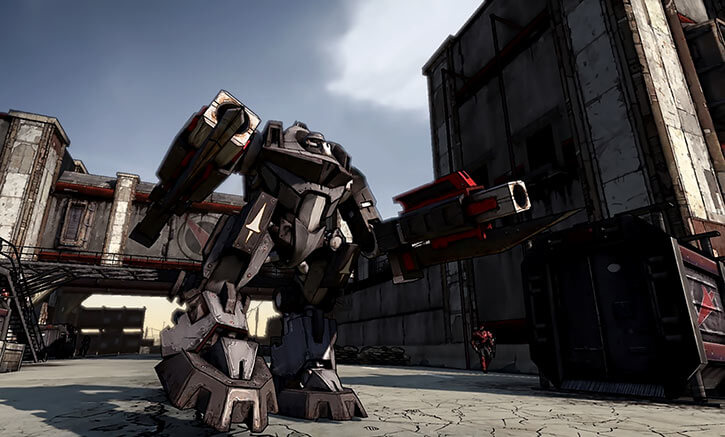 Lancers are large, heavily armoured, all-terrain wheeled vehicles. They’re an odd hybrid between a light tank and an armoured personnel carrier. I guess that they are intended as patrol vehicles in dangerous areas.

A Lancer is crewed by four :

This vehicle also has a digistruction system that allows the crew to teleport in or out of the Lancer within a second or two. Not unlike the fighters in Destiny 2. 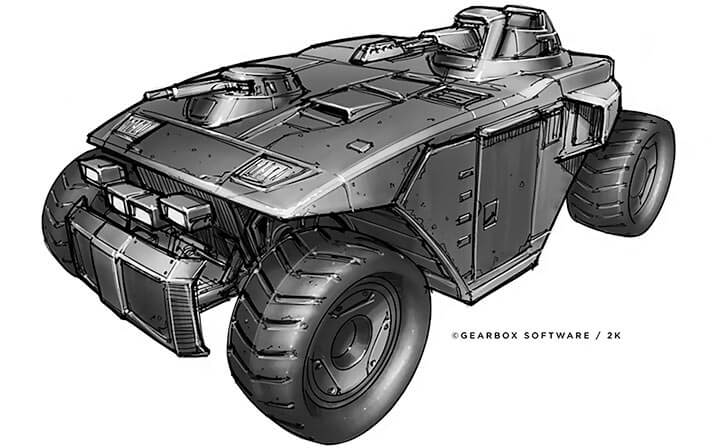 This special elimination unit was deployed on Pandora shortly after or before the opening of the Vault. They’re essentially space ninjettes.

Chiefly for PR reasons, the Assassin squads are all-women units. As could be easily predicted, this meant massive abuse from the management. The girls were tortured, forced to kill their relatives, brainwashed, etc.. Officially to make them pitiless. Yeah, right.

Knoxx was originally dubious about their military value. But the crusty General changed his mind after they eradicated all bandits in and about T-Bone Junction, an important road hub for Atlas troops. 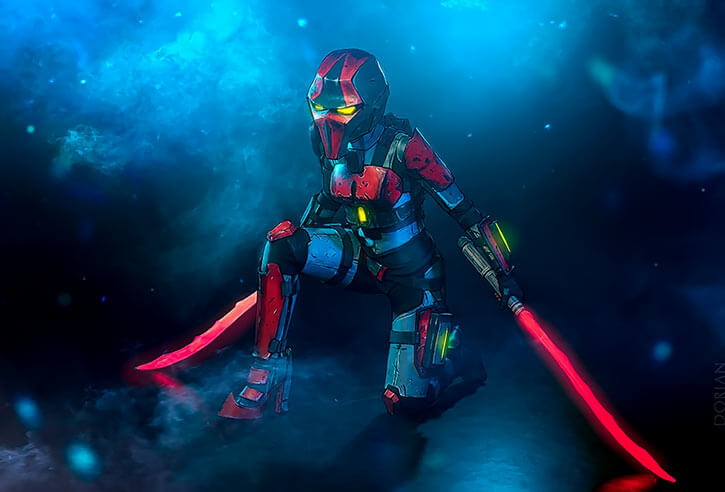 Crimson Lance assassin costume by Meariku  , and apparently photograph and post by one Dorian.

When Atlas pointlessly turned against senior Assassin Athena, Knoxx was furious. Ultimately, Athena allied with influential entertainer Moxxi, and from there with Angel and her four Vault Hunters, to eliminate the other Assassins.

Assassins wear lighter armour, for stealth and mobility. They are armed with a pair of plasma swords. They use fast acrobatic movements to traverse any open space and engage in melee.

Assassins also have shuriken to wound and distract.

Connections:
None per se.

As per line Lance infantry.

They’re not as tough as Athena, but tougher than a badass and with high Damage Capacity APs.

(The names are just to align with the vacuous marketing for the “Atlas” brand. A common slogan for their guns is “know what it’s like to wield the power of a god”.)