Borgia is a cyborg, which allows her to accomplish powerful physical feats. But she’s also a skilled assassin, seductress and hacker.

Her body is coated with poison, lethal to anyone making skin to skin contact with her.

How she was cyborged and integrated in Minotaur’s group is unrevealed. We can assume that she was a criminal that fled her country to Gamorra. Seeing her great potential, Minotaur offered her a job, a new identity, and a new body.

Anyway, she is now one of his lieutenants. Her first appearance was when the Minotaur was ordered, by Kaizen, to bring back Cybernary. As this necessitated an adroit operator, Minotaur preferred her over Gila to go after the nympho-droid.

She found her and expected to get her easily. She was in for a big surprise. Cybernary kicked her butt and made her reveal the location of Cisco.

Later, while Cybernary was fighting his former teammate, now a monster, in The Minotaur’s arena, Borgia came back to warn him that the nympho-droid was the target of their deal with Gamorra. Despite her warning, Minotaur wanted to ransom Cybernary.

In the assault on the Minotaur’s stronghold, led by Vandalia, Cybernary got loose. Borgia was the first to fall, as she was studying her abilities.

Then, during the “Fire From Heaven” crossover, Borgia impersonated Cybernary when she and Gila killed the UN’s inspection team. It was all framed by Kaizen to make StormWatch think that the Gamorran Political Underground was up to something bad in Gamorra.

That way, StormWatch was much more willing to kick some ass on ’would be‘ trouble makers in Gamorra. She helped defend Kaizen’s laboratory in the battle for the Gen-Factor clone

Borgia is an attractive young woman with blue-green skin, long pointed ears and a bald head. She dresses in provocative clothes, using her appearance to draw men’s attention where it shouldn’t be.

In battle, she wears a helmet, topped with two long vertical horns. It conceals many weapon systems. When at work at her desktop, she wears a pair of red sunglasses and a leather body glove. She has pierced her body in many places.

She likes her job as an assassin as well as hacker. But not enough to put her own life in jeopardy for a mission. 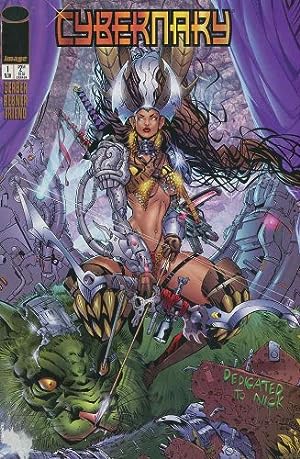