The fist is held by a steel spindle of about the same length as the arm housing it. Thus, this spring-loaded attack can be used to punch two arm lengths away. How the fist is cocked back in position is unrevealed.

Under his devious chauffeur cap, Boris wears a metallic skullcap that allows him to headbutt or ram solid objects. Perhaps there is a layer of vibranium  insulating his brain from these impacts.

I don’t think anything is known about Boris the devious chauffeur, beyond the doll itself and the illustration on the packaging. Unlike, say, the P.A.C.K. I don’t think there was a mini-comic or anything along these lines.

However, this toy has always struck as the ultimate generic 1970s villainous henchman. He lies (because he’s devious) halfway between a James Bond villain’s henchman and an obscure baddie in Master of Kung Fu.

The character would have been at home in nearly any 1970s street-level comic or adventure movie. You could just insert him anywhere. He could have fought Wonder Woman during the “karate mod” era. Or Black Belt Jones. Or even Mack Bolan for all I know.

I don’t mean to repeat baseless rumours, but I’ve heard that he’s devious. Y’all be careful around him, right ?

Advantages
None comes to mind.

Drawbacks:
SPR (Boris is missing his left arm, and his prosthetic hand doesn’t appear to be prehensile). 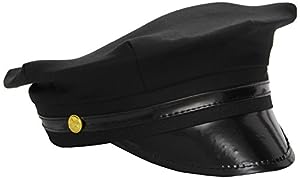 Your own (not devious) chauffeur hat