Bosch was a minor villain in the 1995-1998 DC Comics/Chris Claremont book Sovereign Seven. He was themed after a famous painter with a grotesque style, and often teamed up with two similar characters.

Bosch can grow insect demons out of his body.

There does not seem to be a limit on the number he may summon. Therefore, he generally summons as many as he feels are necessary for the situation, or as many as he has time to summon. He has been known to use an army of over 50 of the creatures, when attacking more than a few opponents.

While he suffers no ill effects if the demons are killed, he does feel extreme pain if they are transported to another dimension. Still, this doesn’t appear to cause him actual wounds.

The insect demons range from 6 inches to 3 feet in length. They have wings which allow them to fly, and can secrete a poison which puts their targets to sleep. They may also spin a web which holds victims tightly, and secretes a less powerful form of their poison into the target.

Bosch took his name from the artist Hieronymus Bosch  (no relation), whose work his creatures resemble. He is known to have a criminal record under this name prior to joining Dystopia, but the powers he had were boosted by Neron.

In return for this, Dystopia undertook to serve Neron. One such mission was to kill the sister Violet Jones and Pansy Smith. The two ran a Coffee Bar called Crossroads, where Sovereign Seven worked.

When Dystopia attacked, Violet and some of the Seven were in Gotham. Dystopia quickly overcame Cruiser, Rampart and Pansy, and held them captive until they could also capture Violet.

Bosch travelled to Gotham, hunting down Violet, leaving Escher and Arcimboldo guarding their prisoners. He tracked Violet and the other Sovereigns to Gotham, and sent a swarm of his demon insects to attack them.

When Cascade transported the swarm to another dimension, Bosch fled, only to be apprehended by Batman.

Crude and brutal, Bosch directs his servants in a straightforward manner, attacking his opponents head on.

If his army is taken away from him, he runs away as fast as he can.

“From my own flesh, the substance of my soul, I draw forth the means of our enemies’ doom !”

“Our souls are pledged to Neron, all worship to his unholy name !”

“Meat, the deed is done, the battle won ! Only one loose end left.”

Bonuses and Limitations:
Dimensional Travel only allows him to summon Demon Insects at a rate of one per Phase (-2).

Bonuses and Limitations:
Sleep can be transmitted via Narcoleptic web, in which case it is only 04 APs (+1), otherwise it has no range (-1). 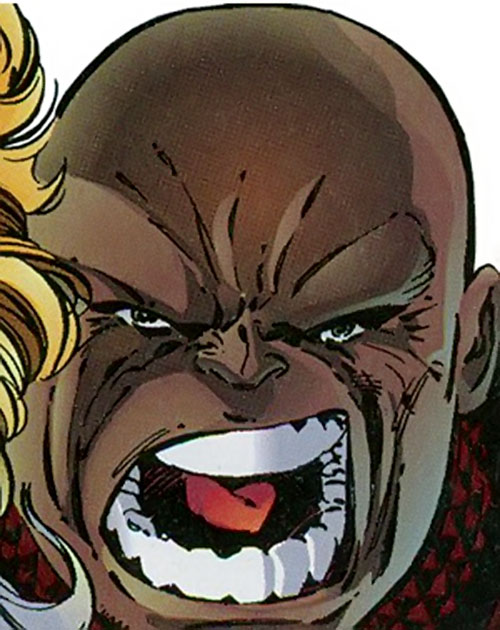 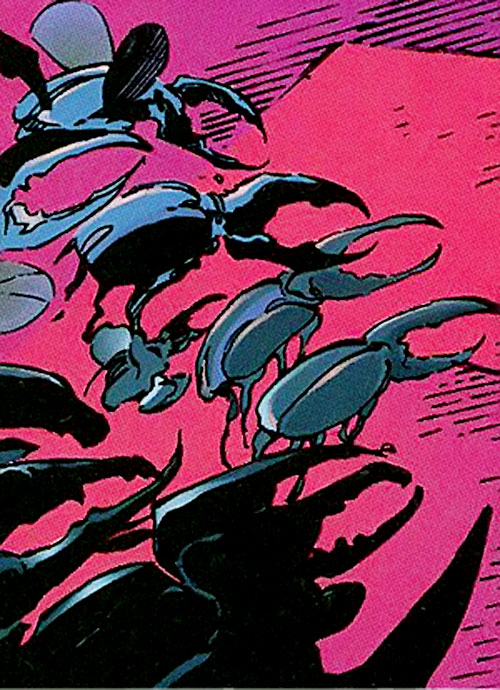