Madison Jeffries is a mutant with the ability to manipulate metal, glass and plastic. He is able to manipulate these substances down to the atomic level. He principally uses his abilities to alter the form and capabilities of the Box robot. Other stunts include blowing up metallic entities, or instantly repairing mechanical objects or beings.

While his brother was alive, Madison was able to psychically sense the presence of Lionel Jeffries.

He occasionally used Growth, but was limited by the amount of nearby material he could add to the armour – it is hard to go in the double digit, even when absorbing big buildings.

Madison is a mutant (like his brother, Lionel, a.k.a. Scramble), and became a mechanic and engineer. He enlisted in the U.S.Army in ’nam, where Lionel suffered a nervous breakdown. Madison himself ended up in a clinic when coming back home.

He met Roger Bochs, the inventor of the Box armour. Both joined Department H’s Beta Flight, where Jeffries had a romantic encounter with Diamond Lil. When the government disbanded the Flights, they were among the few who did not turn criminal. Still, while Roger became Box, Madison stayed in the background despite being responsible for the actual building of the new robot.

However, Jeffries was present in the parking lot of the West Edmonton Mall after Alpha’s second encounter with Omega Flight. Using his powers Jeffries was able to single-handedly defeat the retreating Omegans.

Jeffries remained with Alpha as a resident machinesmith and mechanic until Roger Bochs succumbed to his growing mental problems. When Bochs finally snapped it was Jeffries who defeated him by using his powers to kick Bochs out of the Box robot. Jeffries then took possession of the robot for himself.

Alpha Flight then experienced horrific problems with Lionel Jeffries, and Roger Bochs went completely insane and was killed by Lionel.

Steeping into the ring

Thus was Madison forced to step in and become Box. During the battle with the composite creature known as Omega (made out of Lionel Jeffries and the remains of Bochs), Jeffries discovered that he could use his abilities to reshape the Box robot into any form he desired. After the battle ended he decided to kill the insane creature rather than risk it escaping captivity.

His power soon made him the most powerful team member. He had a relationship going first with Heather (they even planned to be married during a long time), and then Diamond Lil. Madison left the team to live with Lil.

Madison Jeffries has been seen more recently, working for the current Director of the Weapon X program. His abilities seem to have greatly increased. He seems to be the provider for the super-advanced robots, weapons, buildings, etc. used by the program.

Jeffries appears convinced than the Earth has been taken over by “evil mutants”. As a result, he works hard at providing the means of fighting them. Although he’s calm, he’s obviously deluded and his sole contact with the outer world seems to be through the Director.

Madison has black hair, is quite handsome, and tends to dress in a rugged and practical way, like the blue collar worker/ex-military he is.

At this specific stage, Madison was something of a Marty Sue type. He’s tough, smart, rough and tumble, courageous, powerful, manly and gets all the women.

As badly as Canada has fared in the Marvel Universe, it is done even worse in the DCU. Thus, adding the Flight to the DCU would represent few problems. This goes double if your DCU of the Flight is based on the paranoid, government conspiracy-driven Flight that was seen in the latest series.

One of the cute stunts would be to state that Shaman was actually in his youth the mystic called Flying Fox, a member of the Young All-Stars, and retired after the war.

Connections:
Alpha Flight (High). Also had Credentials (Canadian gov’t, Low) during the periods when Alpha Flight was in favor with the government.

Equipment:
BOX ARMOR [/DEX/ 10 /STR/ 18 /BODY/ 12, Telepathy: 06, Limitation : Telepathy has a range of Touch and only works on computers (+0) with standard ports (-1). Matter Manipulation can be used on the suit itself to pretty much duplicate Self-Manipulation, but the suit is not big enough to provide any single effect with more than 18 APs of efficiency]. 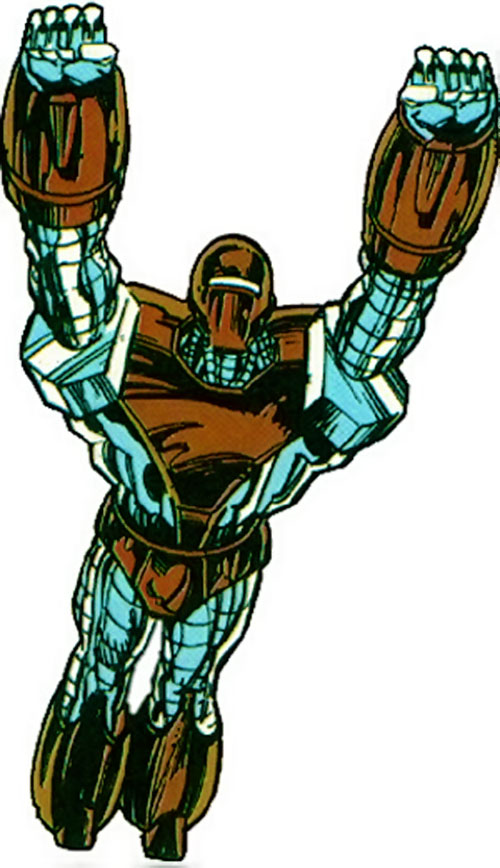