While possessing no real powers, Blue has had extensive practical military experience, and is a highly skilled swordsman. He can also play the bugle fairly well.

During his return to the Homelands he had use of the Witching Cloak and the Vorpal Sword.

The Witching Cloak was used by Blue during the fight at the keep at the end of the world, so he was the logical choice for experimenting with it for the program to familiarise the Fabletown residents with the artefacts they had taken with them from the Homelands.

The exact limits of its powers have not been fully defined, and the cloak has been referred to as a Wishing Cloak, implying that its real powers may be significant. Abilities it has been shown capable of include :

The Vorpal Sword, of Jabberwocky  fame, can slice easily through any substance, as though through smoke. It can be dangerous in unskilled hands, however. It is a danger to everyone, not just its intended target.

Once upon a time Boy Blue lived happily in his homeland. When the Adversary’s forces invaded, Boy Blue was part of the opposing army. Serving with Colonel Bearskin’s Free Company, he eventually became Bearskin’s aide-de-camp, surviving the battles at Boxen, Ruby Lake, Oakcourt, and the hellish rout at Hollyfield.

The Keep at the End of the World

They were eventually forced back to the defence of the last free castle, the Keep at the End of the World. The Keep guarded the last portal to the mundane world. 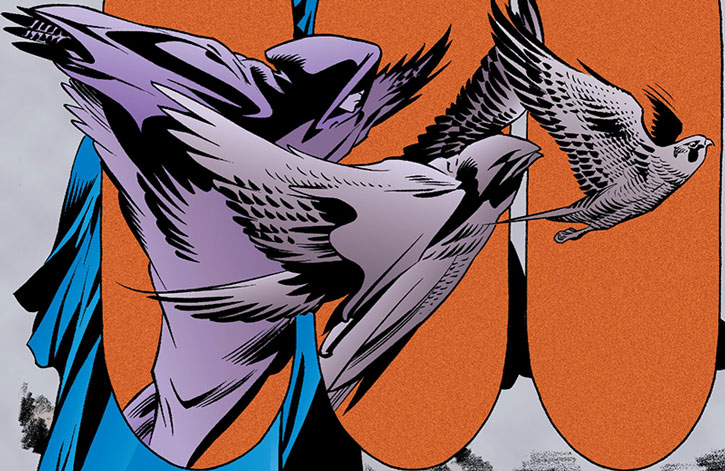 The Adversary’s forces eventually reached the Keep, an enormous army engulfing the land around them. Just ahead of the army fled a woman calling herself Red Riding Hood, nearly dead from arrow wounds.

She and Blue quickly became close, and she suggested they be married quickly so he, as a married man, would get a place on the last ship. Blue declined, seeing it as his duty to stay and help guard the last ship’s departure alongside his companions.

On the morning of the final battle Colonel Bearskin gave him his orders: to watch the battle from the highest parapet, and, when it was inevitably lost, to use the Witching Cloak to teleport to the last ship and warn them. He watched the battle where, despite the valour of the defenders, they were eventually overcome.

Teleporting to the ship, he was distraught to learn Red Riding Hood wasn’t on board, having stayed behind to die with him.

Blue became part of the Fabletown administration, eventually becoming assistant to Snow White. He developed strong friendships with Pinocchio and Flycatcher, and enjoyed playing the blues. However, his youthful appearance prevented him playing in most blues clubs in Manhattan because he looked “too young, too White, and too hayseed to play here, boy.”

He was shocked when Red Riding Hood appeared in Fabletown, and distraught when she was angry at seeing him, accusing him of abandoning her. After a short while she forgave him, and said she wanted to resume their relationship. He realised she wasn’t the Red Riding Hood he knew, but too late to avoid capture by the wooden soldiers serving her.

She revealed herself to be Baba Yaga, and tortured him for several days before the soldiers returned him to Fabletown with a set of demands for surrender.

Blue had Dr. Swineheart patch him up and bind the Vorpal Sword to his broken hands so he could fight in the Battle of Fabletown, where he was further injured by gunfire. It took a while, but Blue made a complete recovery.

During this time he made plans to return to the Homelands, apparently with the secret blessing of Prince Charming, who arranged that additional enchantments be put on the Witching Cloak.

One night Blue took the Witching Cloak, the Vorpal Sword, and Pinocchio’s remains (which had reverted to wood following his death during the Battle of Fabletown). Then he travelled back to the Homelands.

He cut a swath of destruction through the Homelands. As a result, the goblin troops of the Empire’s army coming to call him the Black Knight. Boy Blue:

All the while he made progress towards the imperial capital.

During the Emperor’s monthly Petition Day, Blue infiltrated the court and got close enough to decapitate the Emperor with the Vorpal Sword. But the Snow Queen captured him in a block of ice before he could flee.

He awoke caged in Geppetto’s cabin, his magical equipment nearby but out of reach. When Geppetto revealed he was the Adversary, Blue offered a deal. Pinocchio’s body in exchange for the full story of the Empire’s rise, and for summoning Red Riding Hood.

Gepetto agreed, and after telling his tale received Pinocchio’s remains. He soon repaired them and revived his son. 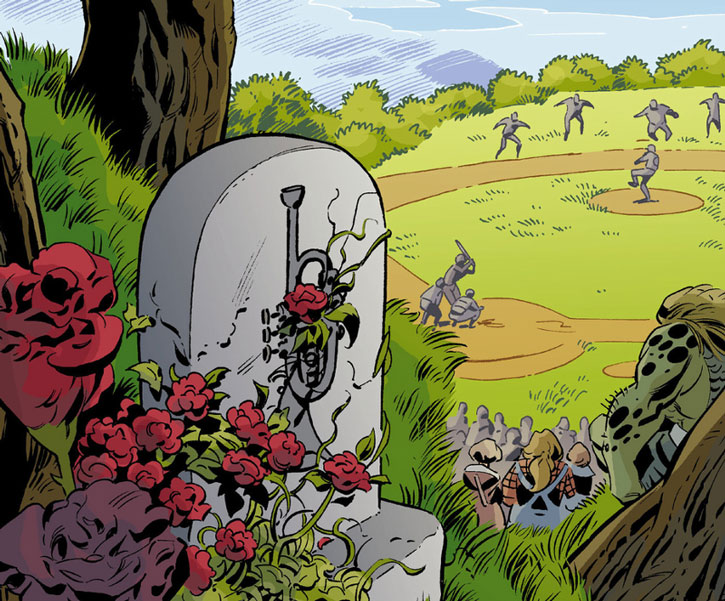 When Red Riding Hood arrived, Blue learned that they’d never met. The one he thought he’d loved had been yet another imperial spy.

Tricking Pinocchio into passing him the Witching Cloak, Blue escaped the prison, killed the guards, and tried to kill Geppetto. However, the magic guarding the old man proved too strong, as they’d expected.

When Pinocchio decided to stay with Geppetto, Blue left with Red. They knew that she’d have been executed for witnessing what had taken place. The pair returned with her to Fabletown.

To keep the fact that his mission had been sanctioned quiet, Blue was charged with his apparent crimes. But he was then given a relatively lenient sentence of two years hard labour on the Farm. He handed over to Charming the large number of books he had seized from the Homelands, which were put to use planning for the invasion.

He moved up to the farm, where many residents – including its administrator, Rose Red – considered him a hero for his actions. As a result his workload was relatively light. He led the construction of Bigby’s house in Wolf Valley, and served as Bigby’s best man when he married Snow White.

Blue also grew close to Rose, but took too long admitting his feelings to her. He did so on the eve of the war, but by then she didn’t reciprocate.

Blue spent the war continually on the move. He used the Witching Cloak to check regularly with the fronts and command centre, carrying reports, orders, and supplies. He only stopped after getting in the way of an enchanted arrow aimed at Bigby, which put the both of them out of commission for a while.

They recovered in time for the Emperor’s final offensive, and Blue again cut him up, ending the war. 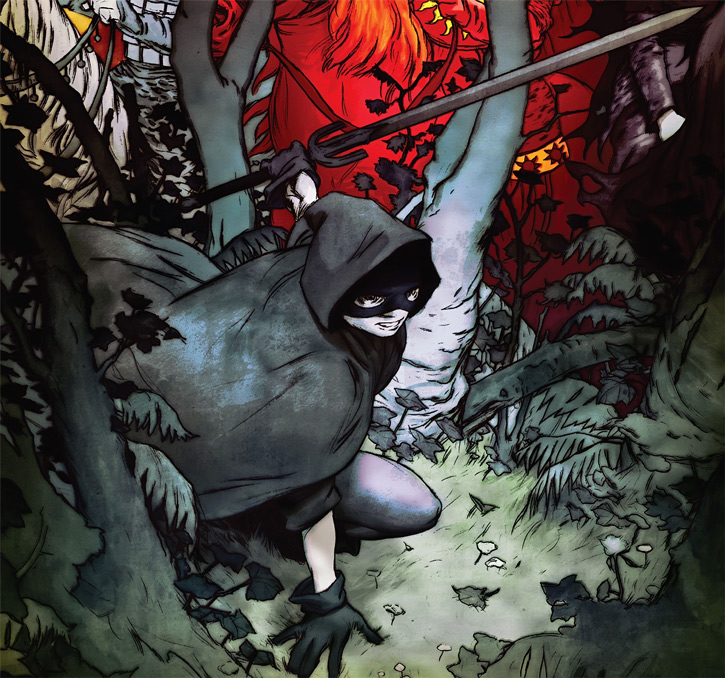 Returning home, even reunited with Pinocchio and Fly, Blue couldn’t find peace. The wound he’d taken wouldn’t heal, no matter how many times Dr. Swineheart operated. He was dying, and no amount of sorceries would cure it. They moved him back to the Farm, where the animal Fables still loved him, and where everyone who wanted to had a chance to say goodbye.

That included Rose, although their meeting was stressful. She’d married Sinbad following the war, although that didn’t last.

He died, and was buried overlooking the baseball field in Flycatcher’s kingdom of Haven. On the Farm a movement sprang up, led by Brock Blueheart — formerly Stinky — claiming Blue would return to them when he was needed and lead them into a golden age.

Calm, mild-mannered and unthreatening, Boy Blue appears to be a helpful friendly public servant. This is how most of the Fables have come to see him. They forget his years as a soldier.

While he prefers to avoid combat, when possible, this is only because he has seen enough to be sick of it. If pressed he fights intelligently, and, though he’ll feel remorse, he will kill his enemies.

He is disciplined, rarely acting without thinking through the consequences of his action. Thus, Boy Blue has little sympathy for those who do act unthinkingly, such as Prince Charming.

“I’m beginning to suspect that these pre-fight introductions are mandatory with you guys. Fine ! Call me the Dread Blue Avenger ! I’m here to exact vengeance for every soul you and your boss-lady ever killed, or hurt or even made feel bad. How’s that for an ice-breaker ?”

“After my years fighting in the homelands in so many losing battles, that’s all I want to be—an ordinary functionary in a dull office job. I’ve used up all my bravery and desire for glory.”

“If you’re determined to act like a mob, go live in the mundy, where they put up with this sort of uncivilized nonsense.”

Equipment:
During his journey back to the Homelands he took the following with him:

Prior to his return to the Homelands he had a High connection to Fabletown. 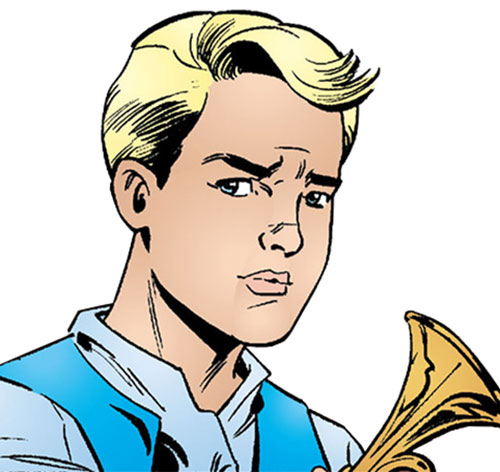 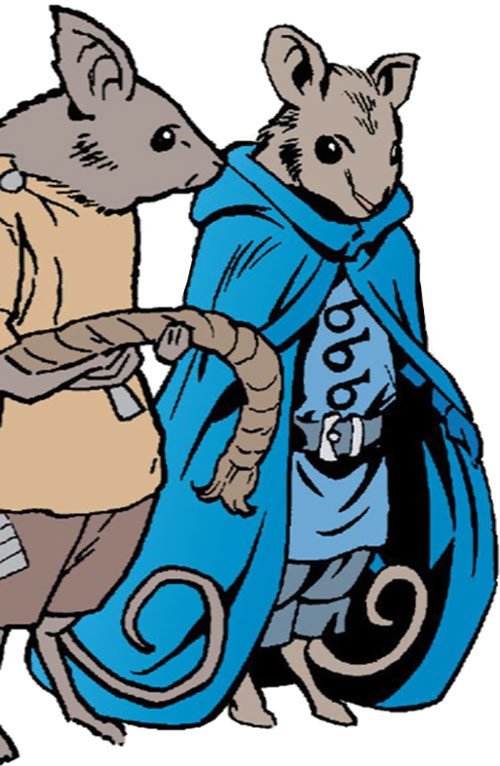 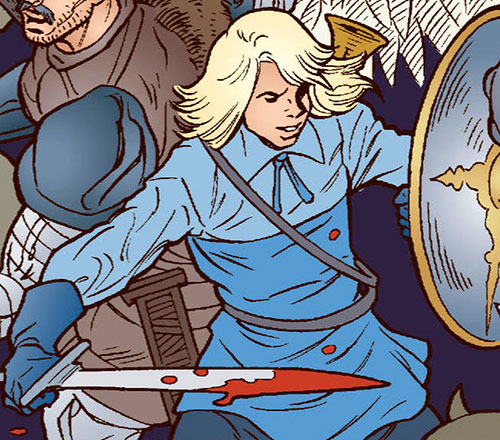 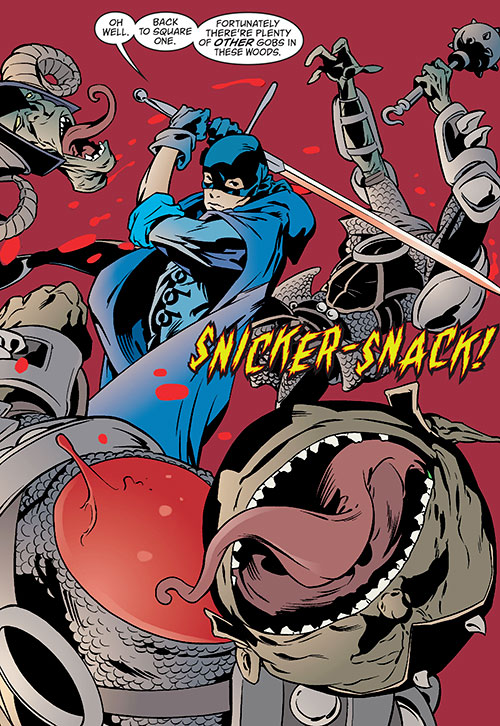 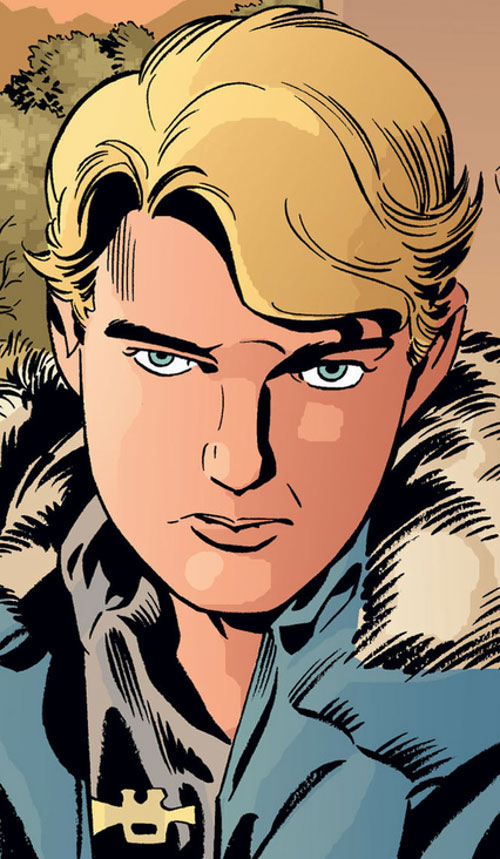 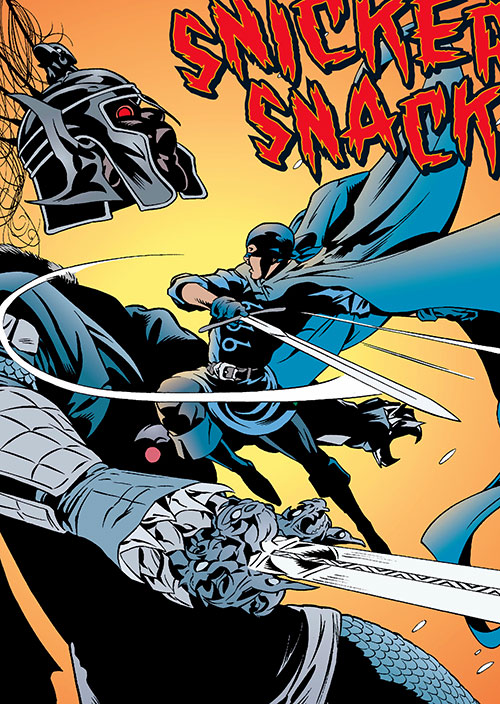