A boy named Sue is a Shel Silverstein song, though most people think of it as a Johnny Cash song. Both versions were released in 1969.

Having spent most of his life beating up people who laughed at his name, Sue became a formidable fighter early on – and never lost his edge.

He’s about an even match for Leroy Brown or The Thorn (Rose Forrest).

The article is too short to have a soundtrack. Yet not having the song here just seems weird. Therefore!

When Sue’s father left his family, his greatest act of cruelty was to name his only son Sue. This was a name he knew would prompt incessant laughter and beatings from his peers.

However, Sue returned the carnage tenfold each time.

When he finished school, he never stayed in the same town for long. Sue hoped both that people he met would forget him altogether, and that he would find his father and take a fatal revenge.

Finally, in Gatlinburg, TN, Sue found his father dealing a hand of Seven Card Stud. He introduced himself.

Unbelievably, both father and son survived the battle. His father talked him out of murder, claiming he gave his son that name for the express purpose of making a fighter out of him.

Sue accepted the explanation and reconciled with his father. But he swore he would give any son of his as typically male  a first name as possible. 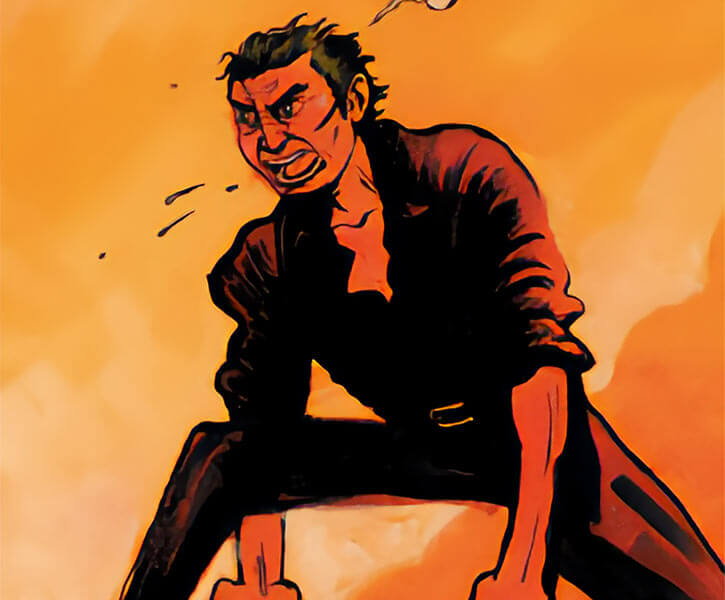 Sue seems to be a nice enough guy until his name comes up. Then when people laugh at him, he turns red from shame if it’s a woman. Or proceeds to bust heads if it’s a guy.

No one laughs at his name without ending up polka-dotted with bruises.

After meeting his father, Sue may have finally settled in Gotham City, the only spot on Earth where there were worse scumbags. There he could put his rage to good use.

Or just leave him as a wanderer picking fights with low-lifes.

He’d be a great character for Constantine to run into (mumbling something about male/female Jungian archetypes), or for the Preacher. Or any character “on the run” to bump into as they try to hide out in any dive.

Exile (Voluntary), MIH (His father), SIA at reacting violently if his name is laughed at.