“Bash” Bradford was the Quarterback of Smallville High School’s football team while Clark Kent was attending there also. He enjoyed pulling practical jokes on Clark almost as much as scoring touchdowns.

He can thus be seen as the precursor to Steve Lombard, who gave Clark similar misery at WGBS in Metropolis.

First seen in 1969, Mr. Bradford mostly appeared in Superboy stories during the 1970s and 1980s – though these were still firmly stuck in the Silver AgeSuper-hero comics from the late 1950s to the early 1970s.

Mr. Bashford was a stock bullying jock character, but there’s still room for a few notes. 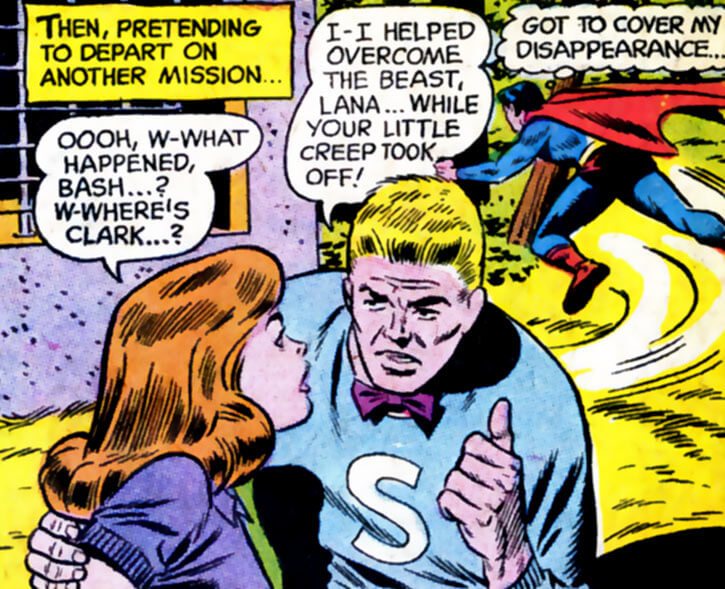 Bash had been serving Smallville High with his gridiron football skills.

However, he inadvertently ate some alien bananas that gave him Kryptonian level strength. He mistakenly believed he had Superboy’s other powers as well, and Superboy maintained the appearance that he did until they wore off (Superboy (vol. 1) #157).

At a later point, Bash’s abuse prompted Superboy to remove his powers so he could battle Bash equally in the boxing ring. But later, on the football field, Bash incurred a concussion. Superboy therefore had to get Dr. Franz Haller in Vienna, Austria, to save him.

Superboy restored his powers with what he called a “Krypto-Cocktail”. He could thus fly the needed doctor to Smallville in time (Superboy (vol. 1) #161).

After another couple of years, on one of his “camping hikes,” Bash stumbled across an abandoned Luthor Lab. He activated a solar infusion booster, turning him into a “glowman” of fire. From there, he ravaged Smallville in an never-ending search for more solar energy.

Bash’s life after graduation was never chronicled. Though it’s easy enough to picture him as a perpetually plastered security guard like Brad Wilson  of the 1978 cinematic Superman universe.

Bash is a highly athletic blond crewcut teenager, always sporting a smirk of pride from his football record.

He dresses high school casual when not dressed for football.

“Hurry– while the coach is busy– let’s teach this squirt (Joe Silver) not to have such a big mouth.”

Yellow Peri: “If you don’t like my act, Mr. Heckler, why don’t you leave ?”
Bash: “Good Idea. MAKE ME DISAPPEAR ! C’mon. I DARE you. Make me disappear into thin air– without any wires or other gimmicks !”
Yellow Peri: “Very well… Levitate into thin air.” (Bash levitates to the top of the atmosphere.)