55-to-60 years later, our contributor Sean went through it and wrote up a bunch of the minor, generic, forgotten villains therein. And thus we have a selection of Golden Age  evil nobodies for you to play with.

He’s a brilliant planner. That’s it.

He also claims to be knowledgeable about poisons as he threatens Mr. Scarlet with a tarantula.

AFAIK, this “the Brain” only showed up in America’s Greatest Comics #1. An (implied) Nazi, the Brain secretly engineered for six super-villains to escape from El-Catraz prison. Afterwards, Warden Loomis quit his job.

Mister Scarlet’s on the case

Then these villains planned to initiate a “putsch for control of America,” involving the deaths of six key men.

Each villain was sent to kill one of these men. After Mr. Scarlet and Pinky defeated them all, the heroes infiltrated the gang (pretending to be the villains Laughing Skull and Horned Hood), and beat up all the bad guys.

In particular, Pinky defeated the Brain.

He is bald, wears a wire mesh spherical helmet, a long-sleeved tunic, pants, and a cape.

“I engineered your jail break. You are all master criminals. Our program has been launched.”

In the post-Crisis Universe, the Brain would still be a Mr. Scarlet foe.

He would likely be the sort of person to restart a new Secret Society of Super-Villains. Perhaps he would even join up with Mr. Skeleton… both villains being named after body parts. 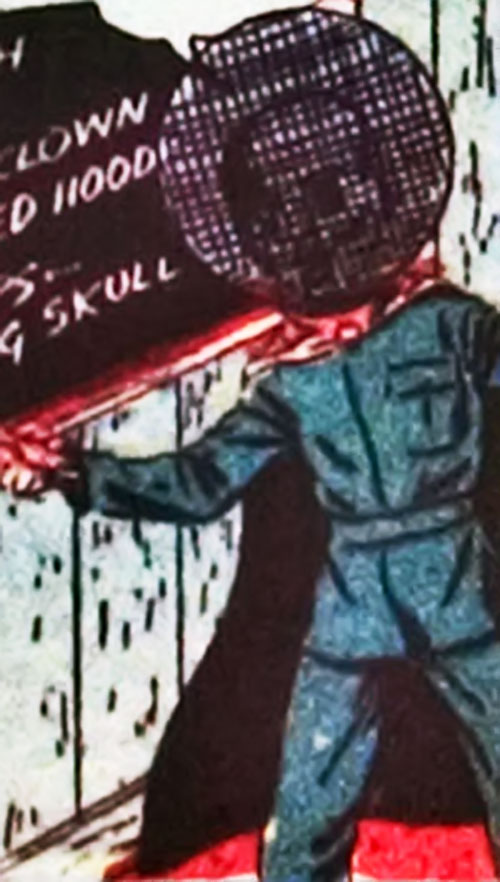