The brain globes — a popular motif in older science-fiction, comics and pulpsCheap, often lurid novels in the US during the 1920s and 1930s — clashed with DC Comics’ Superboy and the Legion of Super-Heroes but once.

That was during the Silver AgeSuper-hero comics from the late 1950s to the early 1970s., early in the Legion’s career. The story is very very 1962.

The Legion of Super-Heroes were goody two-shoes super-youths operating in a shiny, ideal 1950s view of a science-fiction future. Over its many decades of publication, the team evolved to better match more modern times.

The Brain Globes of Rambat possess a wide range of telepathic and telekinetic powers. They can:

Their greatest powers are their ability to control minds and manipulate emotions. Yet they are unable to control animals, even animals with near-human intellect. 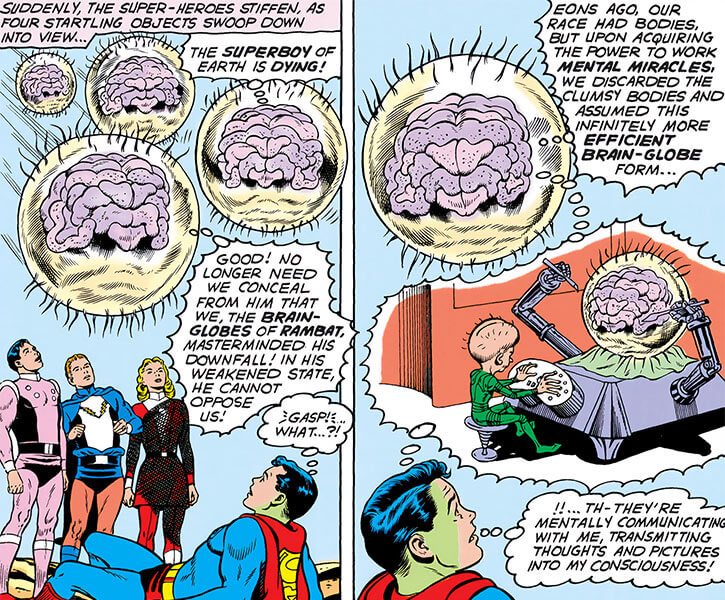 Eons ago, the natives of Rambat, a planet in a purple star system, acquired potent psychic abilities and developed advanced technology.

They chose to pursue their mental development, even abandoning their humanoid bodies. They now lived in artificial “brain-globes” which channeled their mental energies more efficiently.

At some point thousands of years ago, they learned their planet Rambat was doomed to explode due to an internal cataclysm. So they decided to send an advance scout out to find a planet with a similar atmosphere.

In the mid-to-late 20th century, this scout chose Earth as their target. They intended to move it — via gravitic technology — to their home solar system.

But Rambat exploded before this could be done. Only four Brain-Globes escaped the destruction, but they chose to proceed with the plan to steal Earth.

They launched a preemptive strike on Superboy (Clark Kent), Earth’s defender. The globes used their mental powers from a distance so Superboy didn’t know what was happening.

They were unable to mind-control him fully. But they did manipulate his emotions so he almost crashed a plane and briefly attacked his pet, Krypto the Super-Dog. In both cases, though, he quickly snapped out of it.

The Brain Globes decided to get “help” and got the LSH from the future. Presumably they Mind Probed Superboy to find out about the Legion.

We need a bigger boat

The Rambat aliens were able to control the three Legionnaires who defeated Superboy with Kryptonite rays. Then the Brain Globes revealed themselves, and mentally knocked the weakened Superboy unconscious.

But while they were concentrating on him, they failed to maintain control of the Legionnaires.

At the same time Krypto attacked.

The Brain Globes couldn’t control Krypto. So they threatened that if he took out one of them, the other three would mentally activate a device in their hidden “meteor pit” (which they blasted with Mental Blast, and built their engine in) that would destroy Earth.

They hopped in their time sphere and fetched Beppo the Kryptonian Super-Monkey, Streaky the artificially-powered Super-Cat, and Comet, the magically powered Super-Horse.

The four Brain Globes were repelled by the four Super-Pets. They fled Earth, vowing not to come back.

They are brains in giant semi-transparent globes.

“The Superboy of Earth is dying !”

“No longer need we conceal from him that we, the Brain-Globes of Rambat, masterminded his downfall ! In his weakened state, he cannot oppose us !”

“Eons ago, our race had bodies. But upon acquiring the power to work mental miracles, we discarded the clumsy bodies and assumed this infinitely more efficient Brain-Globe form.”

The Brain Globes may have some connection to the Gil’dishpan, also known as the Gil’dan.

In the current-as-of-this-writing DCU there is a Krypto who could fight them, perhaps alongside the Detective Chimp, Rex the Wonder Dog, etc.

The Brain Globes of Rambat

Broadcast Empath and Control are useless against animals (-1 FC each).

Forced Exile (Rambat), Catastrophic Physical Restriction (The Brain Globes are brains inside globes, possessing no limbs and unable to survive outside the globe).

* Without Defensive Roll.
** Only vs. psionics and the like.

I picked their mind control as the Attack/effect PL.

It’s not characters I personally statted, so the stats are done in broader strokes than usual.

By Andrew Lee and Chris Cottingham.