This is the second half of this profile.

So you should read the first half first, heh ?

The Brain Wave managed to catch a projecting beam with his smock, breaking his fall.

He escaped, and started plotting his revenge.

The entire Society was now powerless !

The triumphant BW came to collect the helpless JSAers. He kept them in bird cages as he instructed his mob allies to carry out a huge crime wave.

However, Hawkman had birds seize the cages. While still tiny, the Society was free to oppose Brain Wave’s schemes.

Johnny Thunder’s Thunderbolt then magically undid the effects of the shrinking ray. The Society beelined for the Brain Wave’s ocean-side tower.

King was about to blow the Society up, using mines hidden under the sole access road. But the Thunderbolt magically moved the mines under the tower.

The explosion razed it, seemingly killing the Brain Wave. 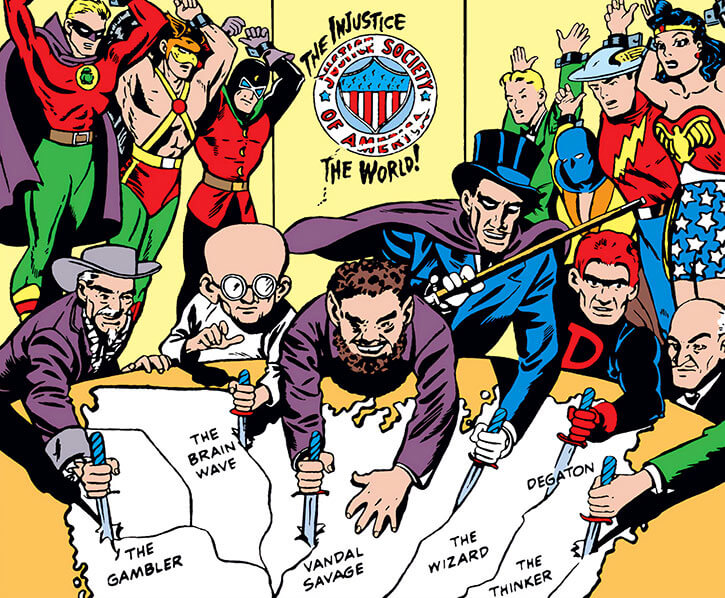 BW resurfaced in 1946. He was disguised as “Forest Malone”, a noted researcher in dreams-exploration technology.

“Malone” convinced the JSA to participate in his experiments. But his actual goal was to drive them all mad.

Each Society member was plunged in a surreal, nonsensical, themed world – often with a tinge of horror.

It seems unlikely that the tech BW employed was actually dream-exploration stuff, like the one deployed by the Sandman (Dr. Garrett Sanford). It likely was just a cover to implant hypnotic, delirium-inducing suggestions based on his reading of the minutes of the JSA’s meetings.

However, Johnny Thunder’s mind could only come up with a simple, predictable dream world. Being in his element, he acted heroically and wasn’t driven mad at all. He and his Thunderbolt could therefore defend then cure the delirious Society.

The Brain Wave was arrested, and apparently spent a year in prison.

In 1947, BW was one of the officers of the Injustice Society of the World (ISW). This mob was very much an anti-JSA, mimicking its heroic counterparts.

The Brain Wave developed and co-developed weapons for the Society. Such as :

The ISW organised a massive jailbreak. Thousands of freed criminals agreed to serve them, and the ISW armed and organised them as a paramilitary force.

From there, other mobs allied with this force. The situation came to resemble open warfare, as the ISW’s forces could frontally engage police and Federal forces.

The Society’s forces also stormed more prisons to recruit, and received special weapons and assets from the ISW’s senior members.

The Brain Wave styled himself as “commander Brain Wave of the fourth criminal army”.

He led a raid to steal vast amounts of “uthorium” from a mining town, and in so doing nearly destroyed a US Army armoured column. Green Lantern (Alan Scott) but narrowly saved it.

Scott was seemingly killed by King. But he survived, and resurfaced while the ISW was putting a captured JSA on a mock trial.

Wonder Woman took out most of the ISW higher-ups, including the Brain Wave.

In most panels, King had naked legs under his green robes. So I guess he just runs around in his tighty whities and his smock.

He also seemed comfortable bare-footed when in his tower, but will wear sandals outside of it.

When seen in his civvies King was wearing a coat that fit him terribly, as his shoulders were too narrow.

As an Injustice Society member he was wearing trousers and shoes under his smock.

The height of madness

The vitals given in the Background block represent the way BW is drawn during these appearances, rather than his official DC values.

It’s a crude average, as his stature and physique change from story to story.

However, these changes are fairly coherent. He gets shorter and shorter, his body gets increasingly goblin-like, and his head keeps being bigger and rounder. So it’s reasonable to assume that it’s a continuing mutation. 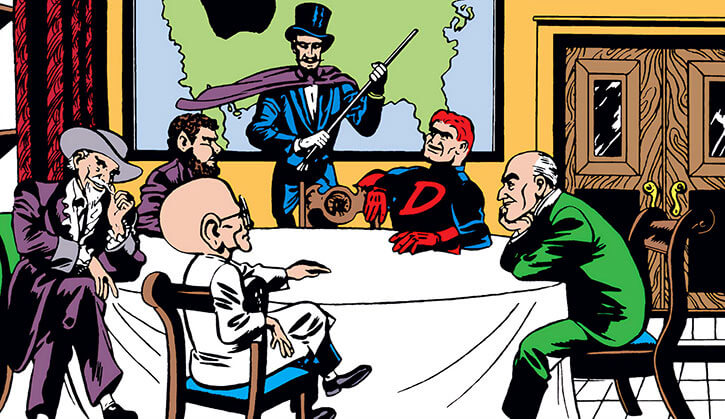 He’s out for money and power, but there’s also a sense that he just likes committing crimes.

BW loves being in charge and proving his superiority over those who seek to stop him.

There’s a vague sense that Mr. King was fond of the stereotypical 1910s country boy lifestyle of his youth. Ragged coveralls, bare-footed, a faithful and friendly doggo, eating fish he caught using a cobbled-together pole, knowing the local land and its resources, all that good stuff.

We later learn that his tower on Sharktooth Bay was close to where he grew up. So he likely was attached to the area.

“I attacked their minds with hypnotic suggestions ! I have overcome not their bodies, but their brains ! I have made them mad — with fantastic phobias !”

“One by one the Justice Society falls before the might of the Injustice Society – even as the forces of law and order fall ! Come ! We have work to do !” 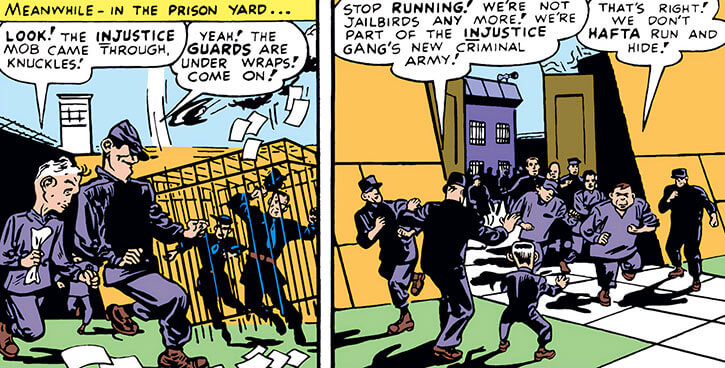 Creepy Appearance, SPR (BW seems to be severely nearsighted, it’s likely he can’t see zilch if deprived of his glasses).

The shrinking ray can be modelled via the Diminution Power, of course. But it’s way simpler to state the effects.

Likewise, the “Forest Malone” “dream machine” could be treated as Hypnosis with Sharpness and other complicated fiddly bits. But in practice :

The “metal projector” is the ISW invention that is clearly credited to him. Matter Manipulation: 09, limited to creating permanent steel cages, is a simple if spectacularly points-inefficient to handle it.

BW also likely played a key role in the “mirage thrower” tech, since it’s illusions stuff. It can film a scene, then the projector (which looks like five-metres tall searchlight) can project that scene over several square miles.

The illusions seem fully immersive. Sherman tank crews thought they were driving along a dusty mountain road when they were actually atop a frozen lake. The illusion only broke, very locally, when the ice gave way under one tank.

The cunning BW also used the thrower to project an illusion of a nearby town in the next valley, then switch it off. He claimed that he had just had utterly disintegrated the town.

Obvs the stats differ from those in Mayfair’s World at War. These were focused on his material published during the 1970s and 1980s, whereas here we’re all about the earliest, 1940s material.

Still, I used those as a starting point, for coherence’s sake. But within the WORG design paradigm – e.g., his numbers reflect the Actions he conducts in the stories, rather than the niche he’s meant to occupy.

You could easily consider that he just switched his M.O. from animations to being Sivana Lite, no further explanation needed. So he’d have both sets of abilities, and just happen to use one, the end.

The modelling here instead provides a framework where it makes sense for him to have switched his M.O.. Because I like it when things make sense.

It also could be used if you want a 1940s Brain Wave who pivots a third, or fourth time toward another set of abilities. Say, telepathy or something. Within this context it’s OK, BW’s thing is to focus his mutant brain into special applications.

The main point of such a pivot is to prevent the Brain Wave from being turned into Sivana Lite. They look almost identical and do basically the same things, which just drained away everything that was interesting about BW.

Having him pivot back to mental powers restores some originality.

All in the mind

There’s a panel where the Atom accidentally passes through two Air Animations. They appeared right in front of him and he didn’t have time to register their presence, so his mind couldn’t consider them as material.

I’m treating that as an edge case for mental illusions in general, rather than something to cover with specific game notation. It presumably was a GM’s call, with the Atom not quite getting a roll to disbelieve. But rather a roll not to have time to believe.

I suspect that BW actually has a STR of 01. Especially in his 1947 appearance where he’s drawn even smaller.

But as discussed in the human STR article, there’s a reluctance to go that low unless a 02 just wouldn’t work. So let’s play it conservatively with a 02.