The Brain Wave is an early DC Comics super-villain, who first appeared in 1943.

He wasn’t the first super-villain, of course. There’s a broad agreement that it was the Ultra-Humanite, a strange enemy of Superman first seen in 1939.

So Brain Wave deserves a historical footnote. He existed in an intermediate space, halfway between 1930s pulpsCheap, often lurid novels in the US during the 1920s and 1930s. villains and 1940s+ super-villains.

This profile only covers the Brain Wave as published in 1940s comic books. So that’s four All-Star Comics (“ASC”) issues.

It doesn’t cover later material, even if set during the 1940s. Most of which occurred during Roy Thomas’ work in restoring the DC Universe’s Golden Age elements. The “royvival” I call it, using my power of great wit.

(And some occurred in 1970s revival work by Gerry Conway. The “gerryvival”, of course.)

This approach keeps the article focused. It’s also useful for those of you who need, for their own stories, an unretconned Golden AgeSuper-hero comics from the late 1930s to the early 1950s. villain to build upon.

This article ended up being inexplicably longer than planned. Though in hindsight, well, he’s a guy with complicated powers and special inventions.

So it’s presented as two short articles for everybody’s comfort :

The abilities of Brain Wave (“BW”) completely changed between his first appearance and his next three :

As with just about every 1940s comic book villain, the Brain Wave had underworld contacts. The kind that allows him to quickly recruit experienced thugs with guns, bad suits and hats.

However, he seems badly nearsighted. And has a distinctive, unhealthy appearance. 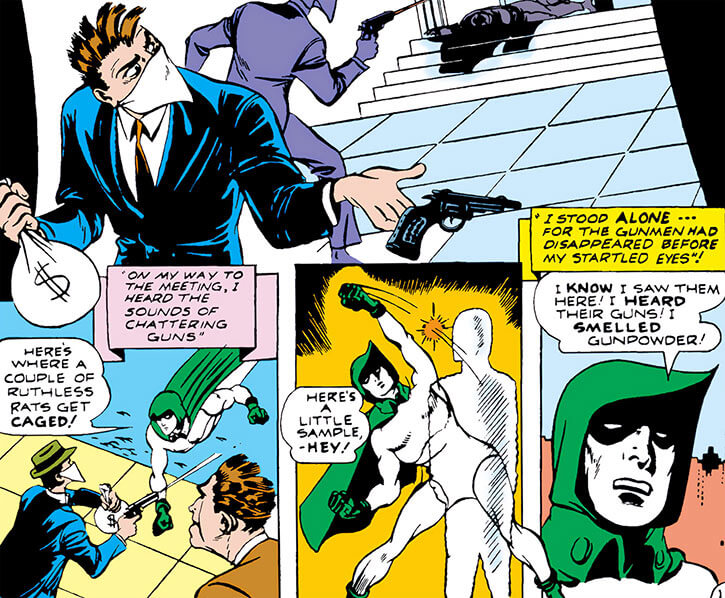 The stories could easily have been told using a different, throwaway villain in each instance. Reusing BW created a continuity effect, but the character was plot-shaped rather than realised.

This wasn’t uncommon back then. For instance, see our character profile for the 1940s Catwoman, whose methods and capabilities kept changing.

For RPG modelisation purposes, we’ll go with a system where he has okay core capabilities, plus a pool of points he can assign to enhance some of these skills and powers.

Basically, he has a “brain wave” and some of his capabilities become much stronger. Strong enough to be the means for his next scheme.

This proposed framework *isn’t* in the material. It’s just a way to make things more coherent a posterioriBuilding a reasoning on a series of observed facts., without changing anything in the Golden Age stories.

(Also, it helps explain his name).

The psionic manifestations BW uses in ASC #15 are :

Those illusions aren’t powerful agents. But they are 100% disposable, can instantly vanish without a trace, are 100% under King’s control, etc..

They are also perfect for psychological terrorism. By :

Use your illusions part II

The illusions can be seen and heard by any person who’s present. They even produce smells, such as burnt gunpowder when shooting.

Whether the illusions can interact with the physical world (outside of causing death by shock) is unclear. But they can be made solid enough to be punched, and the baseball pitcher illusion presumably threw actual baseballs.

They could also carry bags of cash, but had to drop these when they vanished.

One illusion mentions that it comes from “the great dimension of thought and memory”. This may have been an allusion to Jungian concepts about a shared subconscious. Possibly.

This vaguely implies that the illusions, if in the likeness of a historical or fictional character, might have access to that character’s knowledge. Even if BW doesn’t have that information.

Some period country music would be the better choice, I think.

By cover date, the Brain Wave first appeared in February 1943.

However, as discussed in our Justice Society of America profile, you can opt to shift the events in the past by a few months. So they match real-world dates.

If you do that, then the Brain Wave appeared in late 1942.

Back then, the nerd usually was evil

Henry King was born circa 1900. He grew up in an unspecified rural area of the US – possibly Western MA.

Some flashbacks show him shoeless, perhaps to imply poverty.

He was an unpopular kid, introverted and nerdy. He apparently had but two friends, Edwyn Ackerman and Lucy. Lucy was wary of him, especially after she realised that Henry had an unrequited crush on her.

As a boy, Henry discovered that if he focused long and hard enough he could summon illusions. Imaginary friends, as it were.

At first, these were Arthurian knights from his favourite book. Or the “ghost” of Blackie, his late dog.

As a student in Boston.

To better harness this, he went on to study psychiatry and the human mind at a special college – possibly in Boston.

(Apparently there’s an institution there that studies psychic phenomena, and whose students can produce minor telepathic transmissions. In the story, this is presented as not-that-remarkable scientific research).

By this point, Mr. King was increasingly bald, near-sighted and odd-looking, with a bulbous cranium. This suggests that he was some sort of mutant.

(Mutants were already an established sci-fi trope. One early example is The Wonder, from a 1911 novel. A somewhat more high-profile example was the 1928 story The Man Who Evolved, by notable sci-fi writer Edmond Hamilton  . Mr. Hamilton also wrote for DC Comics).

His behaviour was also more sinister. When Edwyn and Lucy married, Henry made bitter, unhinged predictions that Edwyn would murder her.

(Mind, it is possible that something *was* also wrong with Edwyn).

The story of the man who created images !

Craving money, King sent thought projections to grab cash for him, then vanish.

He then started strong-arming criminals into working for him, terrorizing them with illusionary envoys.

Over time, he came to have multiple mobs under his thumb. They called him the Brain Wave.

Part of the money served to buy an isolated, sinister-to-the-point-of-Gothic-horrorness stone tower near the ocean. It had jails, gas chambers and other day-to-day facilities.

Much justice no peace

However, in 1942/43, Justice Society members foiled several of his plots.

As was the style of the day, they each discovered a separate BW-ordered scheme at about the same time.

At the same time, King was driving the Ackermans mad. He had illusions of “people of the electrons” harassing Edwyn, telling him that his particles physics research was killing them.

BW also had illusions of a chained Lucy harass Edwyn, to drive him into killing his wife.

Starman (Ted Knight) stopped this. He and the rest of the Society then stormed Brain Wave’s tower.

In the fracas, King fell off, seemingly to his death.

In the second half of the article we’ll discuss his other three appearances, his mienAppearance and vibe. and personality, his stats, etc.. The usual.