These powerful beings can traverse time and space at will. They either travel to distant times or places, or summon creatures from those locations to their own.

The frogs are only supposed to work correctly when used together. However, it’s uncertain how many of these alleged rules actually apply. Some are simply due to the Frogs messing with their users. Here is what has been observed, with the keywords being for DC Heroes players.

They seem able to use their travel powers in combination. Individually, one is supposed to be able to control time, and the other to control space. But their powers appear limited while separated.

(This one may be a lie. During their second appearance, both used time summoning powers while apparently separated. Perhaps they were swapping places undetected). 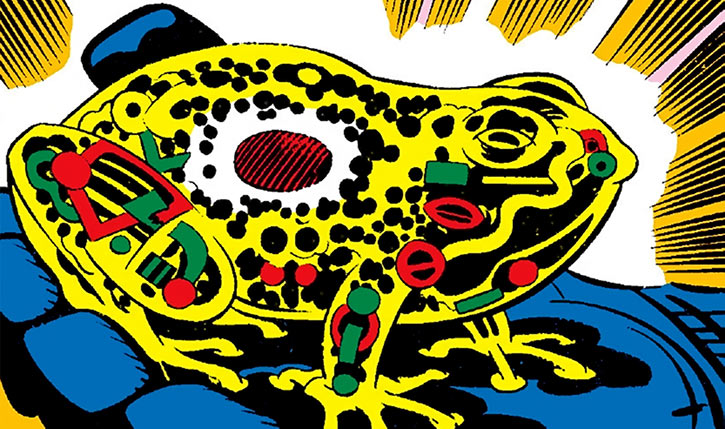 If separated, the one which controls time can only summon beings from other time periods [Dimensional Travel and Time Travel used in conjunction to Summon an individual from an alternate timeline]. It requires the other to banish these beings [Banishment using the two powers]. Again, this doesn’t match what has been shown in the above mentioned instance.

Together, the Frogs supposedly allow the user to control who is summoned from where and when. They also allow anyone touching them to be transported, along with the Frogs, wherever and whenever, the user wishes. Should the user be less than specific — or even if they’re extremely specific — the Frogs may decide to interpret the commands very broadly.

Those subjects summoned by the Frogs are briefly disoriented on arrival. In DC Heroes RPG terms this simply means that they cannot act during the first Phase. Surprise attacks are feasible during this span.

An inscription on the time Frog says that they have a half-life of 90 days, following which they jump into the timestream. I’m not sure how this would allow them to remain entombed for so long, unless the half-life is following the first use. But given the frogs have since been revealed to be sentient, this may well be as false as the other limits on them.

When the summoning Frog is examined too closely, it summons creatures which usually slay the examiners. Examples of such beings include the Six-Million-Year Man, a Grim and Silent Warrior, and the barbarous “Genie”.

Of unknown origin, this pair of powerful artifacts became renowned in certain circles for their powers. They were first heard of in the possession of King Solomon, and were buried with him.

In actuality, they are sentient, although possibly artificial, beings. They sometimes decide how their powers work rather than using them as their wielder wishes. They are believed responsible for a number of creatures which should not have existed where and when they did, such as the Loch Ness Monster.

They remained in King Solomon’s Tomb for centuries, until grave-robbers entered the place. When the youngest thief, Baba, examined one of the Frogs, he unleashed the Genie. This barbarous giant wrecked havoc on nearby settlements before he was stopped.

This Frog came into the possession of Asiri the Wise, then ruler of Wakanda. Being wise, he refrained from using the cursed artefact.

(In different appearances, T’Challa’s grandfather is referred to as Azzari the Wise (in Kirby’s stories) and Asiri the Wise (in Priest’s stories). I’ve used the latter here, assuming it’s a retcon.)

It later fell into the possession of a collector. The frog summoned forth a grim and silent warrior, who slew the man. The body was quickly discovered by another collector, Abner Little, and the Black Panther, T’Challa, grandson of Asiri the Wise.

They sought to return the Frog to the tomb, to avoid the damage it could cause. The Black Panther fought the knight, who fled. But their plans to return the Frog ran afoul of another collector, Princess Zanda, who wanted it for her own.

Locating the tomb, they did manage to return him home, but the two collectors were unwilling to abandon the Frogs. The Black Panther took the decision out of their hands, throwing the frogs to their apparent destruction. This also set off the destruction of the Tomb itself. 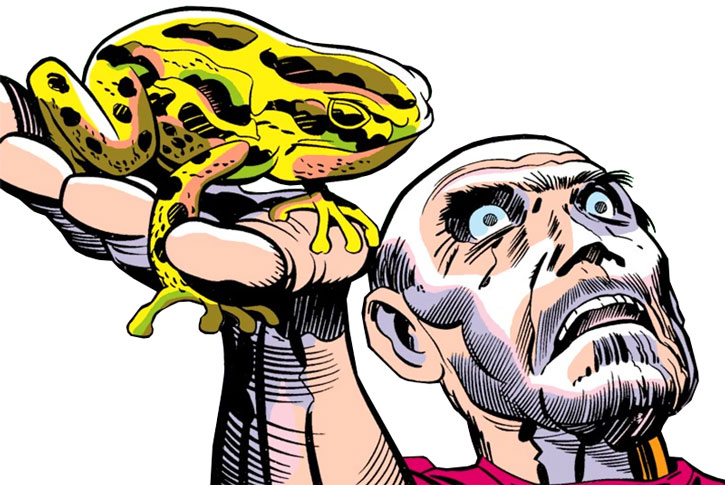 The Frogs survived the destruction. Furthermore they summoned an older version of T’Challa, one slowly dying damage to his brain. This “Happy-Pants” Panther returned to Wakanda, where he was placed in suspended animation until he could be cured.

One of the Frogs turned up in the possession of the XCON conspiracy, who used it to summon certain individuals from six seconds in their future (from a divergent reality). The brief disorientation made them susceptible to suggestion, allowing XCON to brainwash them into acting as their agents.

They replaced the US President, the Canadian Prime Minister, and Tony Stark in this manner – along with others.

XCON was taken over by the White Wolf, a Wakandan secret police agency. This was done as revenge for XCON’s prior attempt to take over their homeland Wakanda. However, White Wolf continued this operation.

The Black Panther became aware of the plot. He stole the Frog with the help of Wolverine (James Howlett). Meanwhile the recently re-awakened “Happy-Pants” Black Panther recovered the other Frog. After a battle with the duplicate Iron Man, the replacements were secretly reversed.

Shortly afterwards, as Henry Gyrich tried to claim the Frogs for the US, their alleged half-life caused them to jump about in the timestream. They took the Black Panthers, Gyrich, and a few others back to the wild west.

The group encountered Thor. Asgardian  magic was able to send them back to their own time, so they didn’t have to use the Frogs. Thus, the countdown to them jumping into the timestream never was triggered.

The Frogs remained in Wakandan hands. They were next used by T’Challa when he needed to quickly return to his Fantastic Four team mates, as they were battling a couple of Heralds of Galactus in the distant reaches of space.

Following the battle, they returned home to find the Baxter Building had been invaded by a creature from the Negative Zone . Trying to use the Frogs to send it home, the five were instead transported to a Skrull planet in an alternate dimension. 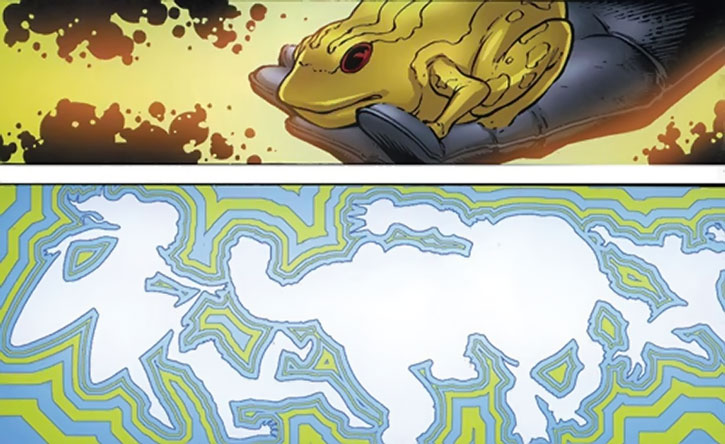 It was there that the Panther first considered, after an off-hand comment by the Thing, that the Frogs may actually be sentient.

Transporting the team through a variety of locations, the Frogs:

When the Black Panther confronted them over their sentience, the Frogs dropped their act, threatening him. The Fantastic Four overcame the hurdles placed in their way, and the Frogs transported them home.

It’s unknown whether or not the Panther attempted to keep the Frogs as Wakandan assets. But given their nature, it’s unlikely he’d be able to if they decided otherwise. So they’re probably at large.

While their true goals are unknown, the Frogs seem to enjoy maliciously turning their powers against those who would use them. The Frogs prefer to keep their sentience secret. If someone learns it, they’ll try to eliminate them. But still, they do all they can to avoid a direct threat to themselves.

It’s really unclear why they operate in certain ways, and whether some of their alleged limitations are just the Frogs being arbitrary. But they seem to put wielders into dangerous situations regardless of the user’s intent.

They have been known to interact with cosmic being such as the Watcher, so it’s likely they have some knowledge of the wider reality than just Earth.

Black Panther: “We know you understand us…”
Storm: “…and we are tired of the games you are playing. End this nonsense or we will destroy you.”
[pause]
Frog: “We’ll see who is destroyed first.”

Frog: “Uatu ! What’s up, buddy ? Down here, big man. I’m a little out of your eyeline.”
Uatu: “I am a Watcher. My mission is to observe all that transpires in the galaxy around me. Therefore, your presence is not a surprise, by any means.”
Frog: “Hey, I’m not trying to disrespect your abilities. I’ve been watching you as long as you’ve been watching me.”

A pair of imps from the fifth dimension.

They have operated fairly quietly in the third dimension for a long time, all their victims believing them simple objects. Thus, they never were suspected of mischief.

In 2012, the Frogs were revealed to be ⅔ of a Concordance Engine. Which are cosmic reality manipulation, metanarrative devices. This engine was transmogrified  into three small artefacts by the Prince of Orphans (John Aman), to hide it from a Death Celestial.

Aman stated that one controlled space, the other time. The third seemed to manipulate reality on a deeper level. Aman kept the third hidden in his fortress in Z’Gambo.

For more about Concordance Engines, see our Prester John character profile… if you dare ! And can wait for us to publish it.

Connections:
Each other (High), Watcher (Low).

Many of the alleged Limitations on their powers are of dubious authenticity. The contradictions were explained by the Frogs intentionally trying to confuse potential users.

I’m ignoring the inconsistencies in the recent Black Panther series where he’s seen holding one of the Frogs, but has access to most of its powers (despite mischief from the Frogs). That’s because the dialogue clearly states that both Frogs are present. Artistic gaffe.

If they are artificial beings, they may need Self-Link (Gadgetry): 50, but this isn’t clear. 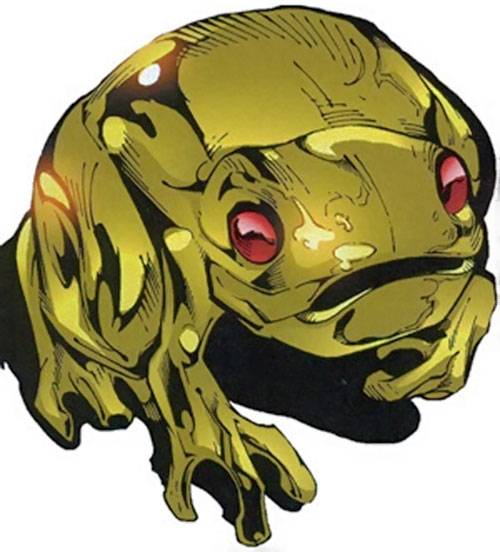 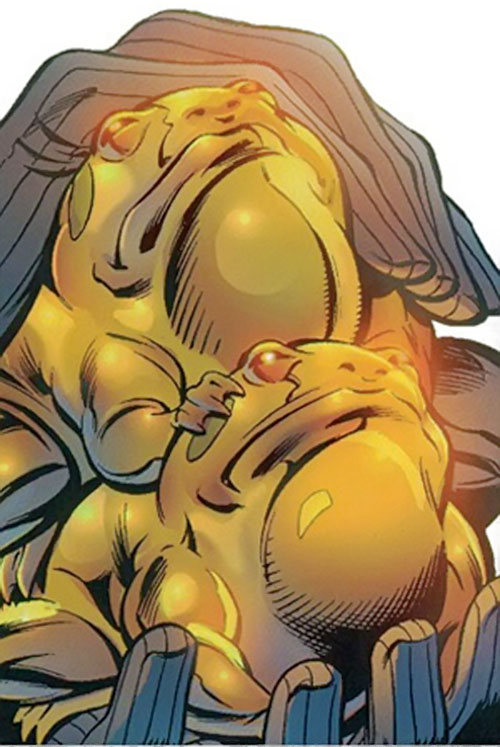 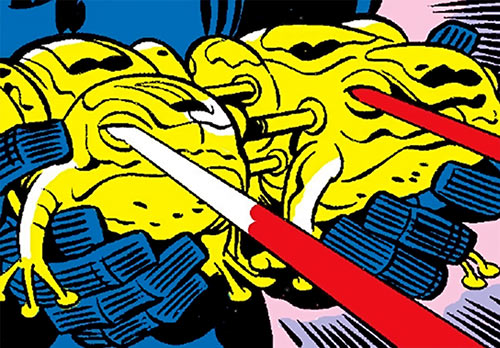 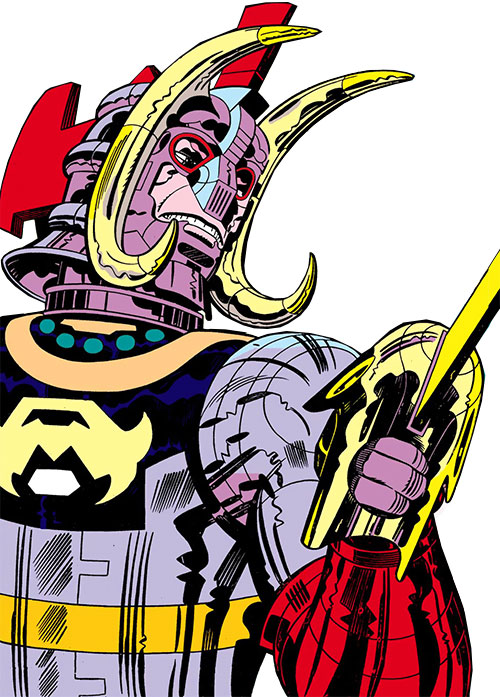 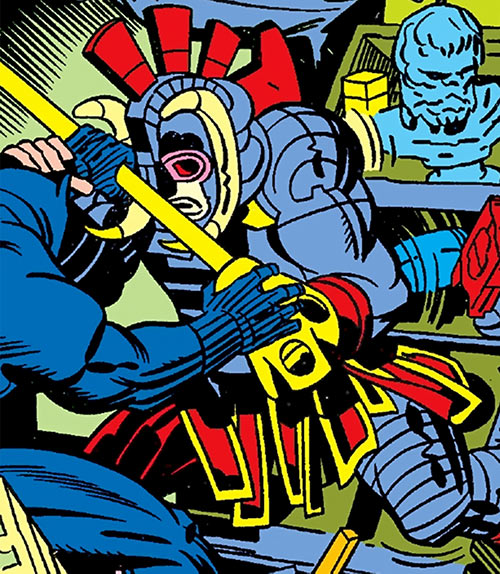 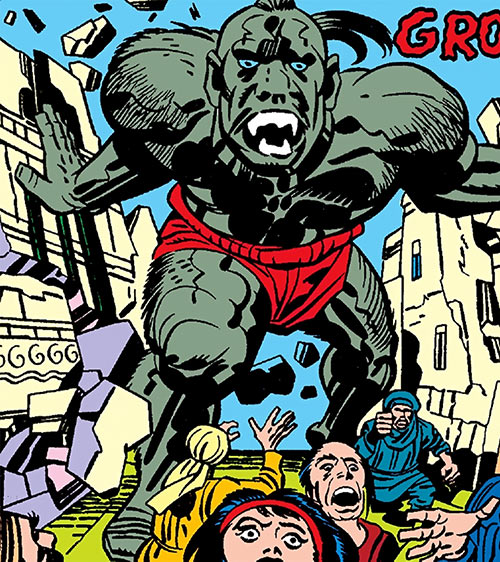