Breaker is a minor character in the Dark Horse Heroes universe. He was primarily seen in Barb Wire stories.

For full context, you should first read the Gangs of Steel Harbor article.

Though he’s short, Breaker is very heavy and muscular. He also possesses superhuman strength and durability. Neither his strength nor his combat prowess match those of Mace Blitzkrieg, but he can certainly inflict a lot of damage.

Breaker’s strength is a curse as well as a boon. He finds it nearly impossible not to break ordinary things as soon as he touches them.

Among other things this makes it hard for him to feed himself (forks and knives will last seconds). Since him grabbing big chunks of foods and eating them as they get crushed is too messy, other gang members take turns feeding him.

Beyond the general history of the Wolf Gang, little is known about Breaker.

When Bomber refused to follow Hunter’s strategy during the 1994 gang war, she easily recruited Breaker. They fought against Mace Blitzkrieg, with Breaker quickly being defeated despite his strength and resolve. 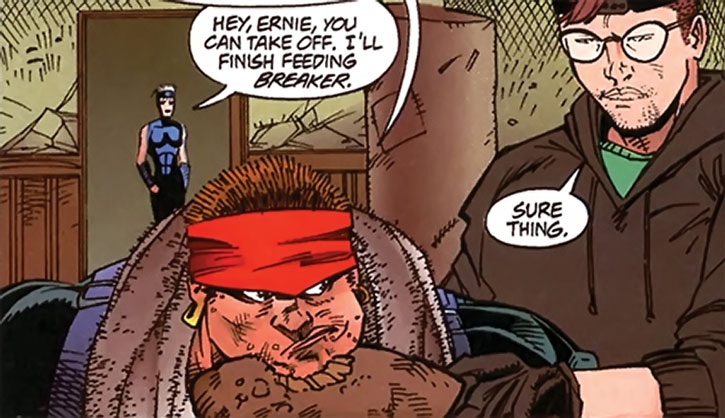 Breaker is not the sharpest knife in the drawer by far. But he seems to want to be a loyal, tough and gung-ho Wolf Gang OG . He’s a bit too dumb to be afraid, which helps, and generally comes across as poorly educated and lowbrow.

Breaker is frustrated by his condition. Having to be fed makes him feel like some sort of animal in a zoo, and one way to make him happy is simply to give him a big chunk of juicy meat he can finally eat on his own, without help.

Though he grumbles about having to be fed like an animal, there is some dog-like vibe to his loyalty toward his gang. He seems to be closest to Cutter and Bomber (though Bomber thinks he’s a bit disgusting).

“Only one way outta Wolf Gang turf… in a box !”

“And you’re gonna have to hit me a lot harder than that to hurt me !”

Bonuses and Limitations:
Density Increase is Always On and Already Factored In.

Drawbacks:
SPR (Breaker has no fine control over his strength – he cannot pull his punches and will likely destroy any ordinary item he’s handling). 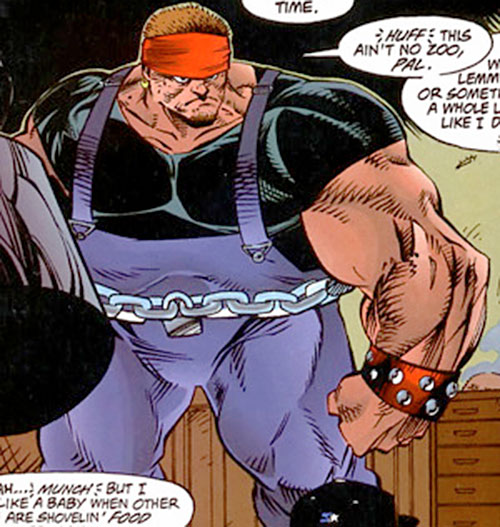