Breetai is a giant warrior with intense combat skills. He is a general who has been successful across many years and hundreds of battles. He is over 200 years old at the beginning of the story and has never been dealt a significant defeat until facing the RDF.

In personal combat Breetai is powerful, beyond even his mighty troops. On one occasion he ambushed three mecha, one piloted by the greatest ace of the era, and beat them all into submission with a length of pipe. Beware Breetai’s pipe.

The Zentradi are 60-foot alien clones. This would make them stand out at a football game.

Butt is possible, as was done during the 1st Robotech War, to micronise a Zentradi. From point of view of game mechanics this makes them into ordinary people. In DC Heroes terms, the Growth power is removed. The equipment to do so is available to the fleet, but is badly understood.

One thing that is sure is that there are no half way steps. One is either fully micronised or a full scale giant.

No one has ever tried to use it in reverse on a human.

The last Protoculture matrix, a device that generates the vast energies used by ships and weapons on the era, has been stolen. The thief, Zor (no relation), has taken it from the Robotech Masters who own it. The Matrix and the ship containing it, later known as the SDF-1, have crash-landed on Earth.

Nearly 20 years after the theft the Robotech masters send a fleet of Zentradi warriors to retrieve it. By this time the forces of Earth have formed the RDF. They have used the technology they gained from the SDF-1. But they never came to know that the last matrix is contained in the engines of their adapted ship.

The First Robotech war ensues. The RDF and the Fleets under Breetai clash and nearly the whole Earth’s population is killed. It is discovered that the music of Lynn Minmei has massive psychological effect on the Zentradi.

In the greatest persuasion attack of all time a great bulk of the Zentradi fleet turns sides and allies with the humans. Unfortunately a greater fleet commanded by Dolza arrives to re-enforce Breetai.

In the end Breetai is among the survivors of the humans and Zentradi that rebuilds the Earth. They also send the REF fleet across the galaxy to “negotiate” with the Robotech masters.

Years after the Macross War Breetai leaves Earth-space with the REF.

Breetai is a hard to miss figure. He is nearly 70 feet tall, has one eye covered with a riveted-on eye patch, and speaks a sub modulated voice that leaves him with a strange warbling sound.

Most often he is seen in is fleet commander’s uniform, a long blur overcoat and blue trousers.

Breetai on first look is a stereotypical alien thug-leader. He waves madly and invasion fleets follow. As time goes by you realize he is acting out a Yeats poem . The center has broken and the edges cannot hold.

Breetai is charged on a forlorn hope to recover the last protoculture matrix to shore up the Robotech Masters crumbling empire. The quest is quixotic but Breetai can do nothing but soldier on.

When he converts to the human side and takes much of his fleet with him it is not so much about Minmei’s music. It is about giving his people a chance at something other than endless warfare.

[Breetai after Breetai wipes out Khyron’s fighter squad when they attempt to disobey Breetai’s orders and launch a sneak attack on the SDF-1. Khyron’s enraged face fills the view screen aboard Breetai’s ship]
Khyron: “Commander ! Have you gone mad !”
Breetai (calmly): “Your men were interfering with a diplomatic mission, so I disposed of them.”

(Breetai fights 3 Veritechs with a length of pipe and is only stopped by being spaced. He then claws his way back onto the ship and pries open the airlock and walks back in. When his crew voices concern he replies:)
“I’m not built as weakly as you !”

Without wrecking another of the 52 DCUs Breetai would be hard to use. If you had the urge to wreck DCU-17 you could stage a Zentradi invasion.

Like the Posleen invasion of DCU-16 a couple of GLs, Superman and Captain Marvel would thrash an invasion fleet. If you could keep cosmic heroes out of it fighting off a Zentradi Invasion could be fun. They do have the tendency to wreck the Earth.

A Breetai in peace time would be interesting. If your DCU characters are placed in space and are in need of alliances dealing with Breetai could be challenging and Byzantine. The aftermath of 52 has decimated many of the civilized worlds around us. You could wreck Thanagar or Rann just as easily.

A Zentradi reconnaissance flight has warped in in the orbit of Jupiter in search of the source of human meta-gene. Breetai’s distant masters (who might they be?) wish to capture whatever the elusive source is of the masses of meta-humanity on Earth.

Using a combination of advanced technology probes and occasional landings of Zentradi Battle Pods to capture subjects and samples, Breetai is in the process of gathering study data.

All is going according to plan until he kidnaps Fire of Checkmate. Amanda Waller (the White Queen) and her operatives figure out over a period of weeks that unknown and powerful aliens are kidnapping meta-humans. Waller, realizes that Alien Space fleets are a bit out of her, and Checkmate’s, range of powers and responsibilities.

As the cosmic member of the League are off on an extra-dimensional adventure (Superman, both GLs anyone else that would slaughter Zentradi) a task force of leaguers head out across the solar system in a borrowed spacecraft. Breetai with his probes and spies on Earth are aware that they are coming.

He has also been able to make some use of the Meta-gene in the time that he has had. Breetai as prepared a reception for the leaguers.

Bonuses and Limitations:
Growth is always on an already factored in.

Equipment:
Breetai has at his disposal a vast alien armada and all the gear it contains. Any weapons, armor, technology or equipment possessed by the fleet is his to command. Breetai has the use of an Officer’s Battle Pod if he wants one (See Khyron)
In personal combat Breetai is ruthlessly effective with an 80‘ pipe. He is most often seen on the bridge of his flagship.
The Zentradi fleet is a massive force of destruction. At one point they kill nearly everybody on Earth and boil the oceans.

How gigantic a giant ?

Although Breetai was never micronised in the series it could happen. This would place his as a very large man at 7’5” and 288 lbs. At micronised size he would have a STR 06 and BODY 06.

By Mike Winkler and Shire Meadows. 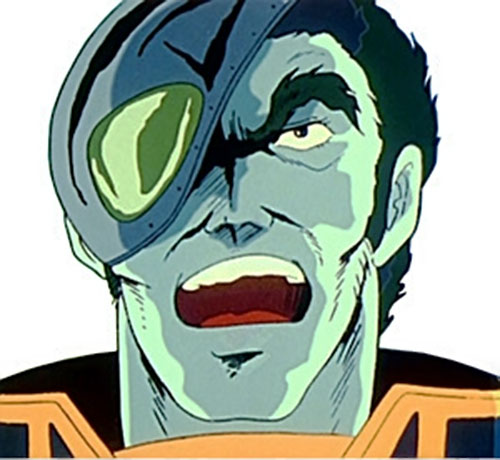 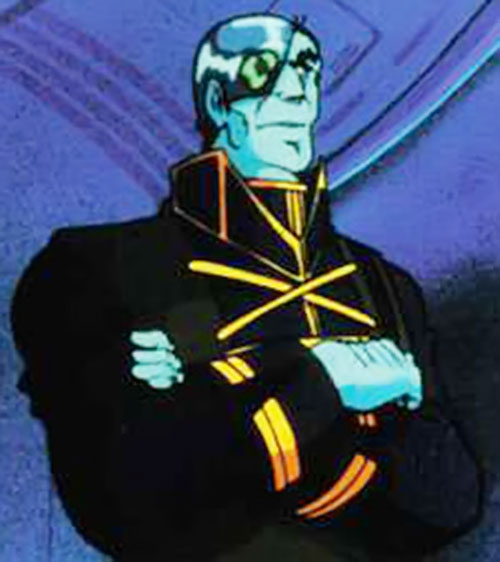 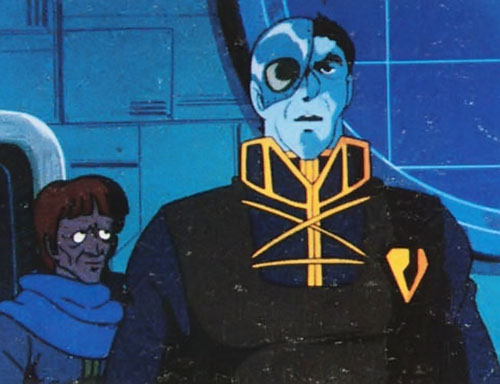