Hart is an exceptional marksman, both with conventional firearms and with his “sharpshooter”, a high caliber bionic weapon implanted within his right arm. His eyes also include bionic implants, providing both telescopic and night vision.

As one of the most noted students of the “Hart Dungeon”, Bret is also highly skilled martial artist. He specializes in wrestling, grappling, and throwing techniques. He has a short-range transmitter implant that sends an psionic signal that negates learned combat skills.

He also has a frightening ability to take extraordinary amounts of physical punishment. This comes as a result of having several duplicate internal organs that serve as a back-up/redundancy system.

Bret Hart was the 4th son of 1940s Canadian Olympic wrestler Stu Hart. A skilled fighter in a wide range of styles (and weapons), Stu opened an underground training facility in the 1970s. His intention was to pass his skills on to the cream of the crop of international fighters and mercenaries.

Despite his lack of metahuman abilities, Hart specialized in training those students who did possess paranormal abilities in the efficient use of those gifts.

He ran the facility, nicknamed “The Dungeon” under the cover of a professional wrestling promotion he called “Calgary Stampede  Wrestling.” It explained the equipment and people entering and leaving the facility, and explosions could be explained away to the neighbors as “pyrotechnics” and “the PA system.”

Among Hart’s best students were his own sons, Bruce, Ross, Keith, Bret, and Owen. Bruce and Ross were “the good sons” and dutifully ran the school as their father’s age caught up with him. Meanwhile, Bret excelled in the application of the training and began working international jobs for his father.

He underwent surgery to implant bionic weaponry and surveillance equipment, as well as duplicate internal organs to improve his bodies ability to absorb damage.

Bret and his sparring partner/brother-in-law, Jim “The Anvil” Neidhart began working worldwide. They developed a reputation for the school as the Dungeon’s premier operatives/graduates, “The Hart Foundation.”

They worked with the “British Bulldogs” on numerous occasions, as Davey Boy Smith and Tom Billington also married two of Hart’s sisters and joined the family.

As Bret gained a reputation, he began taking more time off to avoid risking his life at the expense of his family (now including 4 children). As his children got older, Hart became more concerned over the type of role model he was being.

While his partner, Jim Neidhart, was concerned with becoming financially secure and retiring, Hart became obsessed with establishing a positive legacy for himself. He split with Neidhart and began working in the United States as a “superhero.”

What followed was a string of bad luck that drove Hart into a bitter early retirement. An enemy, “The Heartbreak Kid”, revealed to Hart’s wife that he had been unfaithful, leading to an ugly divorce.

Less than a year later, Owen, the brother to whom Bret was the closest (and who had joined Bret in his heroic activities in the U.S.) was killed in a setup by a New York businessman who had asked for their help.

Finally, during his hunt to bring his brother’s killer to justice, Hart suffered a severe concussion at the hands of a young and inexperienced superhero. The man’s sloppiness during a fight caused Hart to take a blow to the head from a falling steel girder. Hart was forced to retire, bitter and depressed over his string of ill fortune. He has yet to avenge Owen’s death.

The most-viewed match with the Hitman on YouTube as of this writing.

Hart is a handsome man of average height. He has long, slicked back, black hair, and carries himself with a great deal of pride. When in action, he wore a hot-pink, white and black costume with both 4 hearts and a winged-skull logo on it.

Hart considers himself a superhero. He wouldn’t allow the “sharpshooter” to be implanted in his arm until he was assured that it included non-lethal capabilities. He tries to live up to be a role-model but is by no means perfect. This is where his major faults appear.

Unfortunately, after being dealt a string of nasty events in his life, Hart now blames others for all of the misery in his life. He is quick to point fingers away from himself and blames the collapse of his marriage on his the man who exposed his alleged infidelity, rather than accepting the blame himself (assuming that he was, in fact, unfaithful). 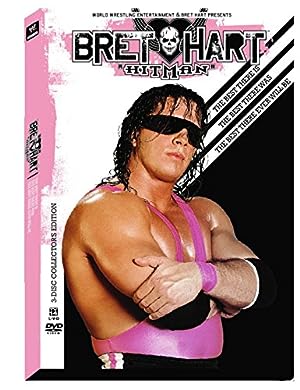 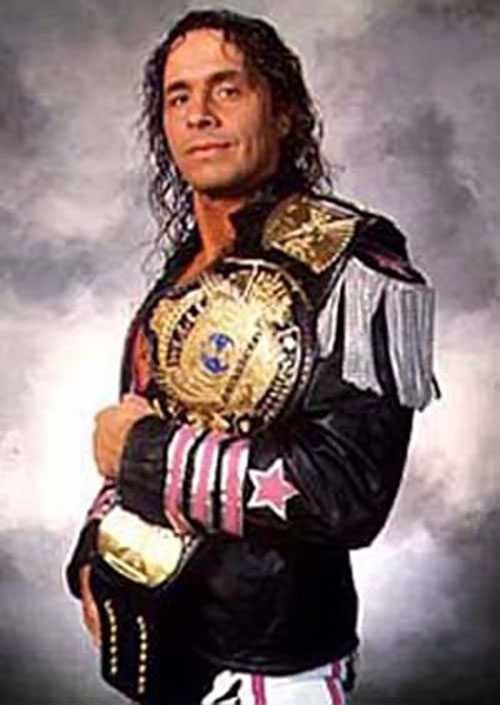