When he flies into one of his berserker rages Brick can beat up practically anything into a lifeless pulp. Including a half-dozen adult skags. Or combat robots though, yeah, these technically were lifeless to start with.

This is manifestly superhuman. Furthermore, he possesses enhanced human regenerative durability. Brick is presumably some sort of mutant, similar to the huge “bruiser” mutated bandits on Pandora.

Brick wears some sort of cesti using construction screws as spikes. These protect his fists and increase the damage. 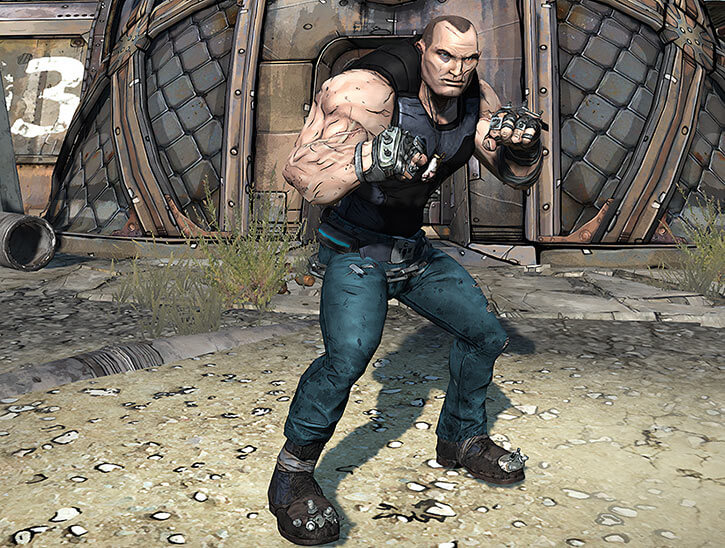 Brick usually carries a large steel pipe or a small steel i-beam. These are used for attacks of opportunity during firefights, if something’s dumb enough to get close.

His usual firearm is a Vladof Hammer assault shotgun. This is used when he can’t be bothered to punch, or to soften exceptionally tough opponents. Such as giant combat robots or hill-sized monsters.

He also carries an Atlas Ogre squad automatic weapon. This is primarily used if he cannot close in.

Both the Hammer and the Ogre are described in the base camp Borderlands article’s technical addendum.

His backup weapon is a large-bore scoped revolver. But this is seldom if ever used.

(These firearms are just typical picks for an endgame Brick with a Brawler-first build. There’s at least one alternate build, which emphasises rocket launchers.) 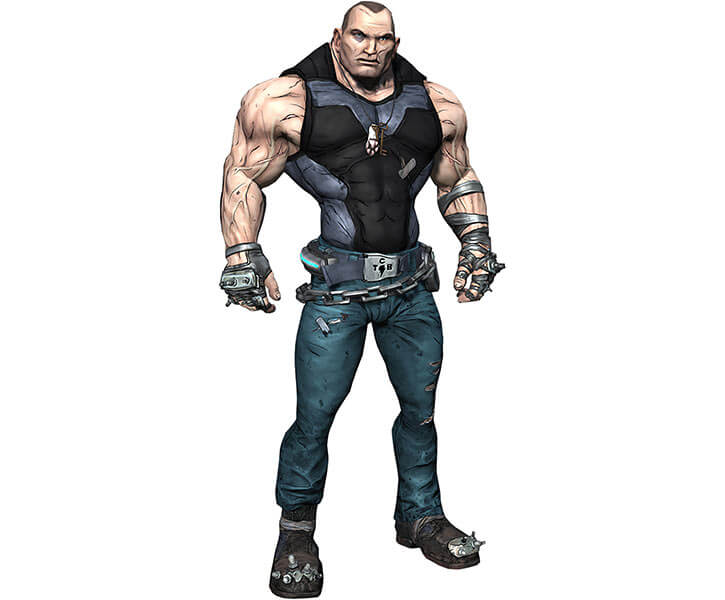 The Slab King in majesty

Between BL1 and BL2, an exiled Brick became clan leader for the Slabs bandits in Thousand Cuts.

These guys are a sizable paramilitary. This manpower is well-armed, and many are mutants of various kinds (psychos, nomads, goliaths, dwarves, etc.). Their camp has significant static defences, such as crewed Gatling gun turrets.

Presumably, they also have some sort of defence against orbital bombardment.

The Slabs are one of the bandit clans with an air force. They ride Buzzards, which are a sort of one-seat VTOL ultra-lights. These have a machinegun and rockets, and a few raiders can mount by clinging to the Buzzard’s sides and standing on the skids.

Brick’s belt buckle refers to this (grand)dad rock classic. So you might as well play it.

One statement is that Brick is from the planet Menœtius. Yet in the material under review, one gets the impression he’s always lived on Pandora.

Perhaps his parents are from Menoetius, but Brick was conceived shortly after they arrived on Pandora.

As a youth, Brick was part of a wasteland bandit gang led by one Crush.

Crush came up with a plan to raid a hamlet, and kidnap all the kids there. Then they would ransom the villagers for everything they owned to get their children back.

Brick was part of this raid. It encountered little resistance thanks to the heavily-armed gang’s attack vehicles.

A momentary lapse of ruthlessness

However, when the time came to scoop the kids, Brick threw his guns to the ground and sat there.

After hours of pondering, Brick punched through the wall and left.

One of the children gave Brick a small dog named Priscilla. The ex-gangster then left.

Adrift and a dog

Brick found himself alone and aimless on Pandora. He may have worked as a mercenary, and/or hobo’d his way around.

After his beloved Priscilla died, the mourning Brick took to wearing one of her paws as a good luck pendant.

Then one day, a mysterious woman contacted him with information about the mythical Vault. 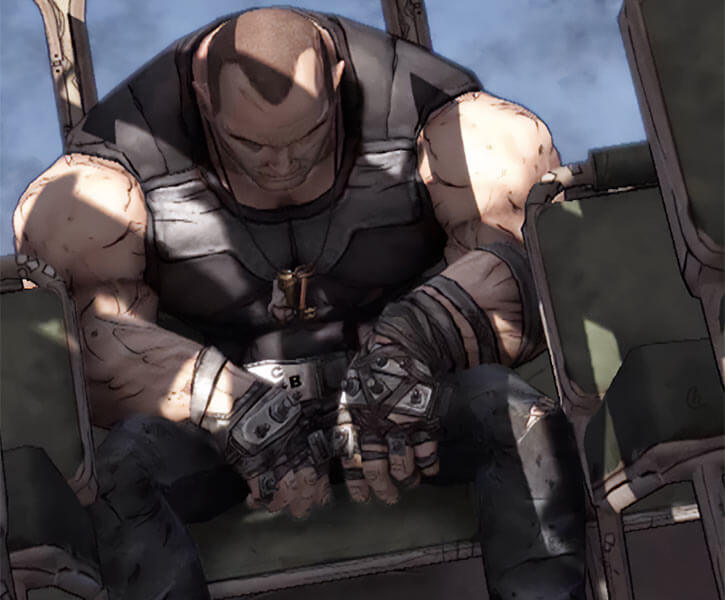 After the Destroyer was slain, Brick settled with the others in New Haven. He also adopted a new puppy, as New Haven seemed safe enough.

He took part in various operations. Frex, Brick once reminisced about attacking bandits along with Tiny Tina. The kid was riding piggyback on Brick, and throwing explosives at their foes.

When New Haven was raided by Handsome Jack, Wilhelm, Nisha and Hyperion troops, Lilith was thought dead and Brick was captured. The Hyperion operatives tortured him, and Nisha Kadam killed the puppy.

The murder of his dog drove Brick over the edge. He escaped using explosives and joined the Crimson Raiders in Sanctuary, but he had relapsed into psychosis.

Eventually, Roland had to fire his friend as he seemed uncontrollable.

Alone, Brick drifted to Thousand Cuts. There, he took over or assembled a bandit clan named the Slabs. His new name was the Slab King, and he often wore a big helmet covering his features.

The Slabs and Lynchwood also maintained hostilities. But the Slabs were too numerous and well-armed to justify the expense of destroying them.

A few years later, Roland decided to recruit Brick back. He needed reinforcements to save Pandora, and the Slabs were just right for the job. He sent in a next-generation Vault Hunter.

(Maya would be the logical choice, I guess.) 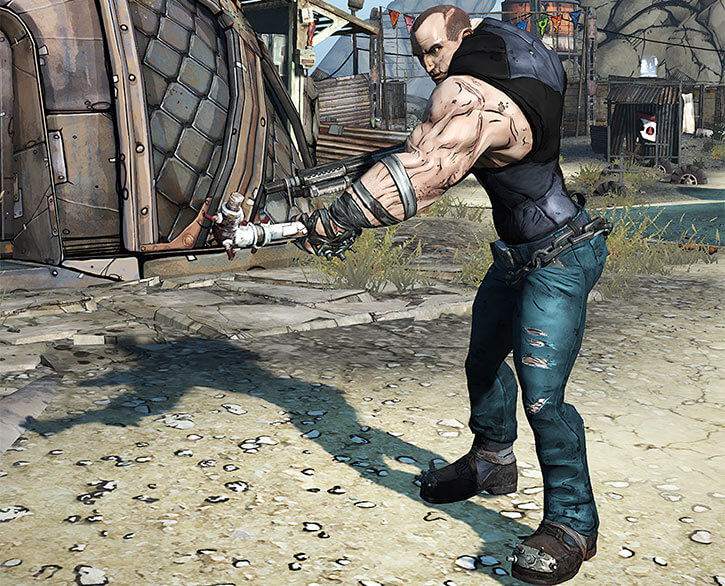 The old team is back

Brick readily agreed. As it turned out, he had finished grieving his puppy, and was now more emotionally stable. He also missed his friends, as the Slabs were but despicable idiots.

As the Crimson Raiders prepared, Brick sent the new Vault Hunters to harass Lynchwood. His plans to do so were pretty good, and resulted in the death of Lynchwood’s totalitarian sheriff – Nisha Kadam.

Brick and Mordecai later greatly helped in clearing a path toward the Warrior, though for a while they were thought to have been killed in action.

Brick inside any sort of vehicle is comical, assuming he can even fit in in the first place. He’s really big.

Brick carries one of Priscilla’s paws as a memorial pendant. After Nisha killed his puppy, Brick wore a second paw.

He has a big belt buckle with the letters “TCB” and a lightning bolt. This presumably stands for “Takin’ Care of Business”. Since the design is reportedly similar to a belt worn by Elvis Presley and inspired by the Bachman Turner Overdrive anthem.

Brick is voiced by Marcus Mauldin  . 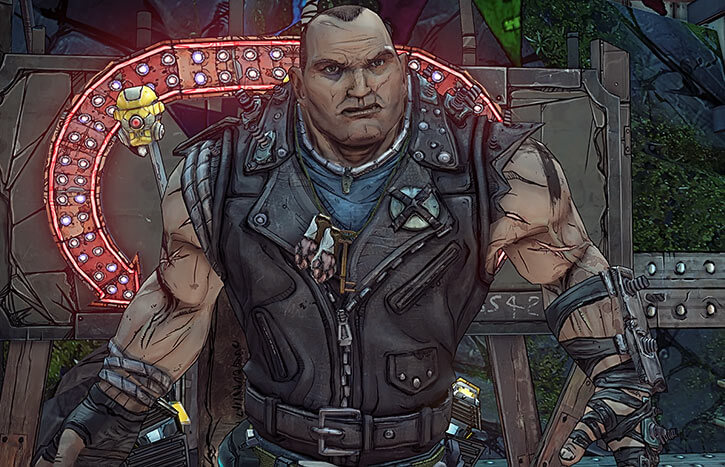 Brick in Borderlands 2, without his royal helmet.

Brick doesn’t seem to be a bad guy per se. But he has a weapon-grade temper problem. He does what he can to keep it under control, but if he’s provoked carnage is nearly inevitable.

Since Pandora is a lawless hellhole full of psychos and macho killers, carnage happens a *lot*.

Though he doesn’t like his temper, he likes fighting and brawling. He behaves a bit like a very competitive boxer. That fights end with dead people doesn’t seem to really be the goal, but life is real cheap on Pandora.

Brick is fond of cute little animals, and protective of children. His pet puppy is critical to his well-being, and he just broke down in tears when his second one was murdered.

When first seen in the comics, Brick avoids talking. One gets the impression he’s trying to minimize the odds of getting irritated and going berserk. Perhaps he was still mourning Priscilla.

But by the time he returns in BL2, he’s chill. Brick wanted to return to his friends. As soon as Roland apologises, Brick agrees to forget and forgive past tensions.

His time adventuring with the other Vault Hunters, and later on with allies such as Tiny Tina, likely allowed him a better command of his emotions.

Brick never hesitates to kill a few Slabs from time to time. They’re uncontrollable and animalistic otherwise, and even by Brick’s standards they’re dumb and unpleasant. Their lives have little value even for their King, and they’re fine with that.

At times, Brick is as thick as two short planks. At other times he displays fair planning ability, and is reasonably articulate.

One possible interpretation is that he’s just slow. If he has a lot of time to think about a subject — such as his revenge against Nisha — then he gradually becomes able to mobilise more acumen. The data is now in his RAM, so to speak.

He also displays a one-track mind. So Brick is bad at dealing with unfamiliar or unexpected information, but becomes fairly competent if he obsesses at length about something. 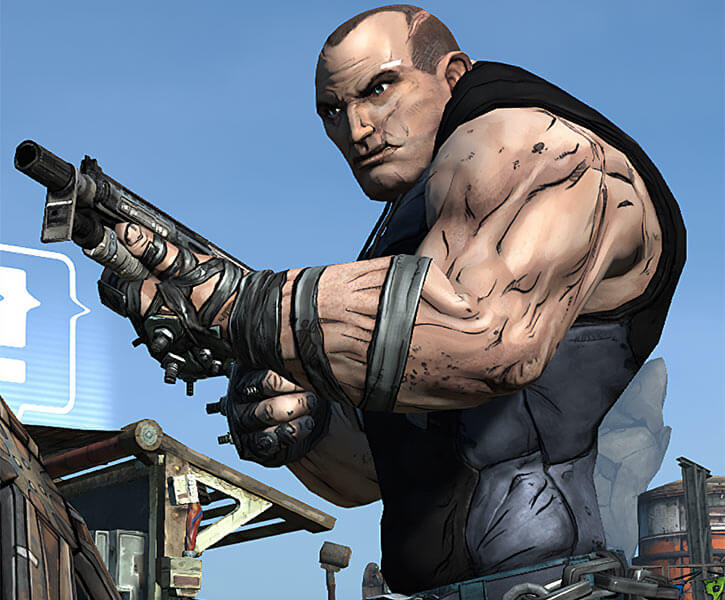 “Show me some blood ! Ahahahaha !” 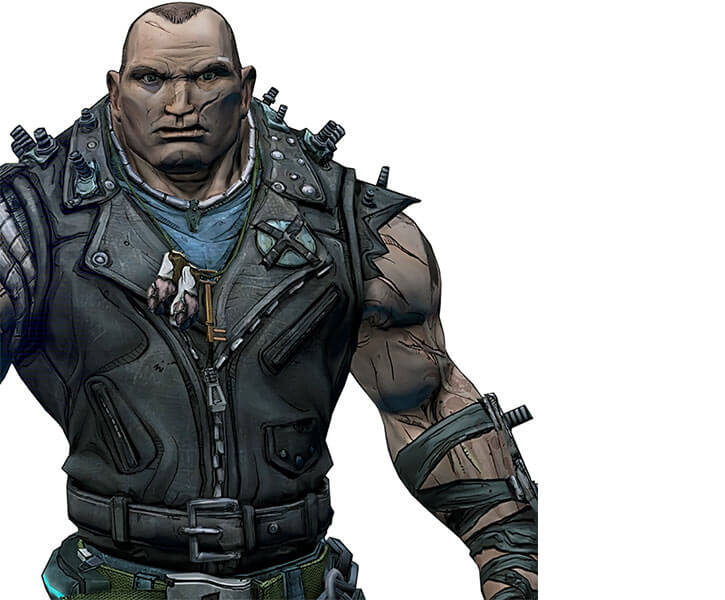 This describes a punching-oriented Brick. There’s an alternative build that is more about explosive weapons, but as an NPC he seemed to have the punching spec.

The game mechanics and how he’s portrayed in the narrative are at odds. Mechanics rely on an activated, with-cooldown berserker mode to have him PUNCH PUNCH PUNCH. But his dialogues and appearance as an NPC imply that he seldom uses guns, and punches all the time.

Which is also why his pipe/i-beam isn’t in the stats. 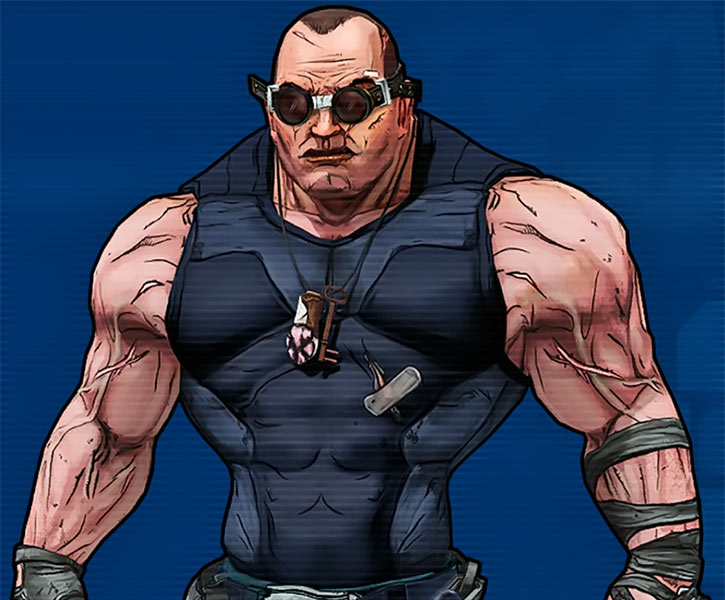 An alternative, presumably Riddick-referencing look for Brick in BL1.

* Without Defensive Roll.
** With orb shield.

The pipe/I-beam is just considered cosmetic, with the cesti being the modelised entity. Simpler, especially since much of Brick’s tactics end up being Advantages such as Power Attack.

Kept the orb shield very simple. Defensive modelisation can be difficult in the M&M system, and anything more complex than Protection would require extensive playtesting.