Brickhouse was fused with a brick wall during the Big Bang. This gave her enormous strength, durability, and density, as well as an unusual appearance.

Brickhouse’s physical enhancements came at a price. She suffers from retrograde amnesia, no longer remembering much of her life prior to her transformation, including her own last name.

Brickhouse is a Bang Baby, a gang member who received superhuman powers in the wake of the Big Bang. The Big Bang was supposed to be a rumble between all of the major gangs of Paris Island to settle their turf wars, once and for all. The Dakota City Police Department learned of the impending showdown and developed a special tear gas that also contained a radioactive marker.

Their plan was to use the gas to break up the Big Bang and then trace the gang members down the next day by tracing the radioactive “tags.” Instead, most of those exposed to the tear gas died. And the handful of surviving gang members that lived had all developed superhuman abilities.

During her time with the Syndicate, Brickhouse developed a romantic relationship with another Syndicate member, Third Rail. The two even left the Syndicate for a time and operated independently due to their disagreements with Wise Son’s leadership.

The two returned in time to help the Syndicate defeat its greatest enemy, the Demon Fox. The Blood Syndicate finally prevailed, at the cost of Syndicate member Kwai’s life.

After this final battle, the Blood Syndicate disbanded and went back to their separate lives, with Brickhouse and Third Rail opening a restaurant together.

This became Holocaust’s ultimate undoing. Icon had brought Hardware, Static, and Rocket as backup. Furthermore, one of Holocaust’s new recruits was an undercover Federal agent. And all of the members of the previous Syndicate who had joined had only done so to uncover Holocaust’s plots and partners. 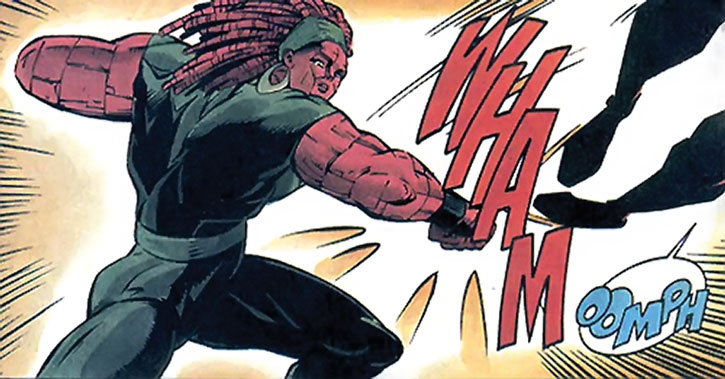 This process was hindered by Starbreaker’s attempt to steal Dharma’s powers. It is thus on-going — Dharma stated that it would be months, if not years, before it was complete. This was likely also a metatextual statement on the incorporation of the Milestone characters into DC Comics’ mainstream titles.

Her skin has the consistency of the bricks that she was fused with, right down to the striations from the mortar. She looks as if she were a statue made of brickwork. Myra greatly resembles the Thing from the Fantastic Four, except for her darker hue and the regularity of the cracks creasing her surface.

She usually dresses in simple overalls or whatever other clothing she can find in her size.

Brickhouse has a particularly gravelly voice.

Brickhouse is a sensitive, compassionate person. She can get greatly upset when her friends or innocents are injured.

She has a low self-esteem stemming from her appearance, which has only gotten worse since her transformation. She verbally berates herself often, and many times seeks solitude when struggling with depression. However, her outlook has been improved by her relationship with Third Rail.

Early Wise Son: “Who’s the bitch ?”
Brickhouse: “What did I tell you about calling people that ?”
Wise Son: “Fuck her. Fuck you too, Brick.”
(Brickhouse hammers Wise Son through the floor)
Brickhouse: “Don’t talk to me like that, alright ? I’m a *lady*.”

The Big Bang and the Blood Syndicate can dropped whole cloth into any urban area where gang activity plays a major role. Brickhouse fits in well in any urban environment as a metahuman, and will likely have Third Rail by her side.

Advantages:
Area Knowledge (Paris Island), Expansive headquarters (The Factory, though the Blood Syndicate may have a new base of operations after its disbanding and subsequent reformation), Language (Español).

Drawbacks:
Miscellaneous (Retrograde amnesia), Mistrust, MPI (Low Self-Esteem), SPI (Epilepsy — this is a physical condition, but the effects are better modeled as a PI), Strange Appearance (Made of Brick), Traumatic Flashbacks, Uncertainty. 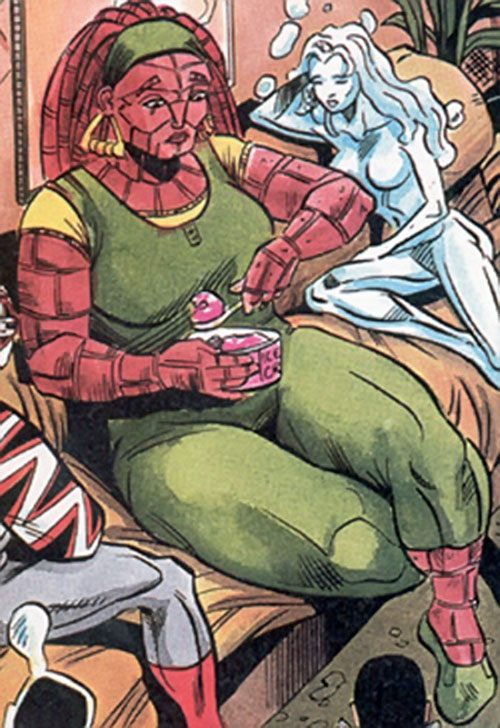