Clancy is smart, handy with tools, and pretty.

She has a strong and lively personality, and everybody likes her.

Clancy was born in Kowloon (Hong Kong). But she was adopted by a family in ireland while she was still a toddler. She attended college in the US. There she came to work as a superintendent for a small, somewhat crumbling apartment building at 1013 Parkthorne Avenue, in Blüdhaven. This is on the East Coast, south of Gotham.

Among her tenants are :

Although Grayson was quite attracted to her Irish lilt, Clancy Mary-Jane-Watsoned the hero. That is, circumstances kept preventing Grayson from ever seeing her face. But he finally had an opportunity to introduce himself. Since Clancy was chatting with a red-haired, fair skinned friend Grayson accosted the wrong woman, to both girls’ hilarity.

Clancy quickly came to develop a crush on Grayson. But due to his activities as Nightwing, their first two attempts at dating were abruptly cut short.

They did manage to go out and kiss on the night of Grayson’s graduation from the police academy. However, Clancy noticed a photo of Grayson holding Barbara Gordon in his arms. That was just as Grayson was explaining he couldn’t go further as a relationship with an old flame was starting to get serious. She fled in tears.

Despite their romantic missteps, Grayson convinced Clancy to return to her old life project – studying to become a doctor. He pulled some strings to have her get a scholarship from the Wayne Foundation. Bridget Clancy is now again a student.

The new super was a man named Dave Toussant, whom Nightwing met on a Christmas night. Toussant (and his young daughters) were killed when the building was firebombed by Blockbuster’s men.

Bridget Clancy was briefly seen later, and the Blue Beetle (Ted Kord) expressed an interest in dating her.

See illustrations. Clancy has a weapon-grade form of the “sexy Irish accent” as Americans like it.

Most of the time, Clancy projected a tough, no-nonsense and busy super image. Her Irish accent, work coveralls and belt of tools projected the proper impression. This was in no small part because she lived in a rundown, dangerous area.

While she tries to hide it, Clancy is a nice person. She likes to help people, which is why she originally wanted to be a doctor and liked her work as a super. When the tenants and herself were almost evicted from 1013 Parkthorne, she worried silly about “poor doctor Fledermaus”. She couldn’t even warn him that he was evicted, since he didn’t exist.

Bridget is particularly sentimental. When she is with friends, she laughs easily and cries easily. Her scream when receiving a vastly expanded city tax paper probably woke up people in Mumbai – she knew none of her current tenants could hope to pay that sum.

She was hurt by Grayson’s romantic missteps with her, but did her best to put on a none-too-believable brave “just friends” façade. Her crush had developed to actual love, putting her in a difficult situation.

When she’s not busy looking all “tough girl”, she is outgoing and friendly.

“ ’cause you think you can make a difference ? My idiotic white knight…”

(Placard on her door) “Forget the dog – beware of the super.” 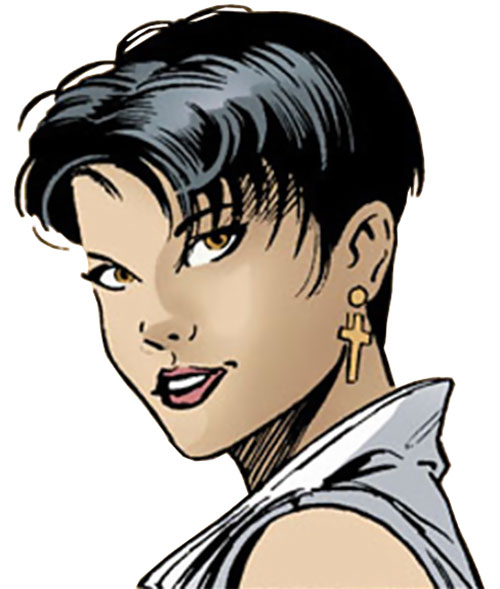