Britney is strong enough to toss vending machines and cars around like they were tinker-toys  (“Class 25” strength or so).

She also is highly resistant to any form of physical harm. Britney doesn’t possess total invulnerability like her older brother Brit does, but everything from bullets and lasers to high velocity impacts simply bounces off. She has even proven capable of resisting blows from Invincible in his earlier days without harm.

Britney’s father, Brittany, became obsessed with discovering a method for making a mortal man invulnerable. The triggering incident was when he lost his wife to a tragic accident in the early days of the XXth century.

He finally succeeded in the days before World War One. The researcher created a formula that rendered his then only child impervious to physical harm.

With Brittany Jr. safe from harm, Brittany Sr. was finally freed from his obsession. Therefore, he searched for love anew. He met a younger woman who loved him dearly and in short order the two were wed. The marriage didn’t last, as Brittany couldn’t bring himself to love his second wife. But it did produce the twins Britney (named after Brittany) and Euclid.

By the time Britney was 19, her father had synthesized an improved version of his invulnerability serum. He then gave it to both twins. Britney enjoyed the full effects of the serum. Thus, she was rendered virtually ageless, invulnerable and super-strong.

After Brittany Sr.’s death, Britney started working covertly for the DEA. She specialized in dealing with extra-terrestrial or superhuman influences on the drug trade.

In recent years, Britney was temporarily transferred to the Global Defence Agency under the supervision of Brit’s handler, Donald Ferguson. She thus found herself fighting alongside her older brother.

The two parted ways once more when Britney decide to go back to the DEA.

Britney is extremely athletic build and yet retains an impossibly full bosom, shapely hips and a gorgeous face. She keeps her stark white hair stylishly short, and doesn’t have to bother with make up or jewellery.

Britney’s uniforms have changed over the years. For the most part, she has eschewed their use. This is because they generally end up in tatters. Or, worse, they were designed to emphasize her exceptional attractiveness, and fixated upon exposing her bosom.

Her most recent costume though is a simple brown and yellow unitard that covers her from neck to ankle. It has yellow arms and leggings while a long swathe of brown colour runs directly down the centre of the costume. The costume is completed by a sturdy pair of brown boots.

Britney is an action junkie. She actively seeks out danger and challenges. She is impulsive and reckless. In almost every situation Britney simply reacts without thought for possible consequences.

Her invulnerability has insulated her from the worst the world has to offer. Thus, she no longer takes anything overly seriously. She is rude, sarcastic and flippant with anyone that will listen. She is very conscious of the effect that her looks can have, and is not above using it to her advantage.

Despite this, Britney is a stalwart ally and deeply loves her brother(s). She’ll readily travel to the ends of the earth to aid her friends and brothers.

“DEA ! Stop right where you are or I’ll throw heavy things on you until you’re mashed into a nice thick jelly.”

(Upon hearing that her older brother, Brit, had been killed) “Brit — you idiot.”

(Regarding her costume) “The entire R&D department needs to get laid.”

“When I’m free, I’m going to punch you into liquids.”

(Standing in the wreckage of a hospital)
Brit: “I was headed home, until my sister calls me from the hospital and tells me she’s being attacked by alien hit men.”
Britney: “I’m kinda insulted they only sent one team.”
Brit: “You’re supposed to be on bed rest.”
Britney: “I’m feeling much better.”

“I even got a uniform that doesn’t ride up my crack. I’d actually wear this one out in public.”

“Everyone here is under arrest. Especially the sentient currently copping a feel.”

“I’ve never had to work to be angry. It’s exhausting.”

Britney is a very minor character. She can most likely be inserted wholesale as is into the DC universe.

STR is an speculative, she may have an AP or two more but we haven’t seen her truly demonstrate the full extent of her strength at this time. 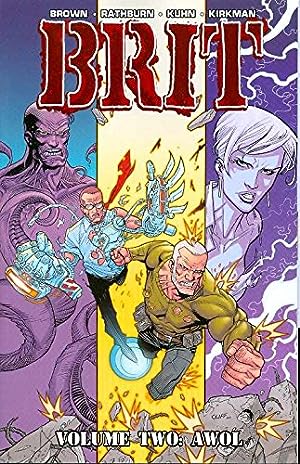 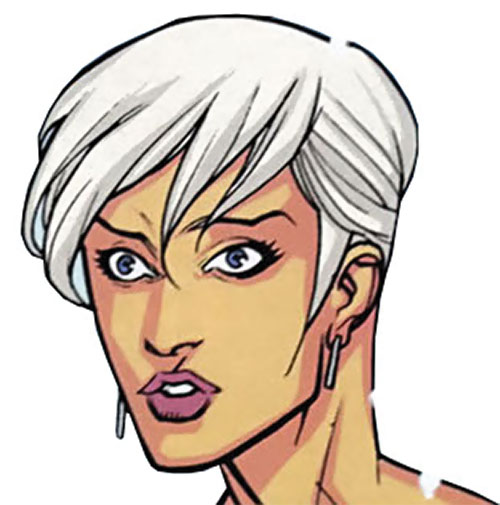 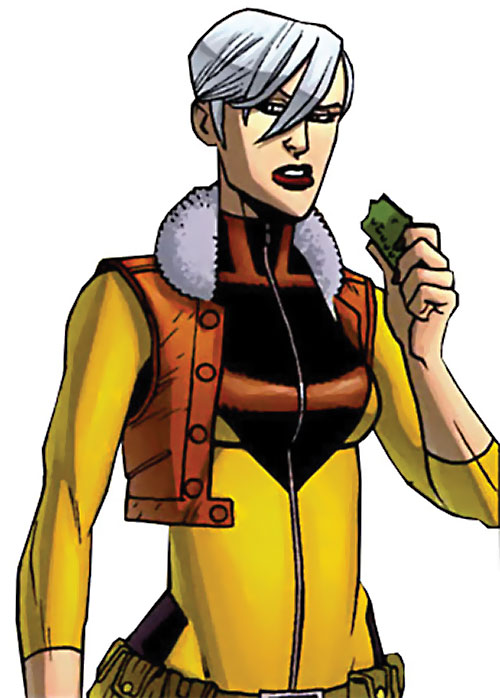 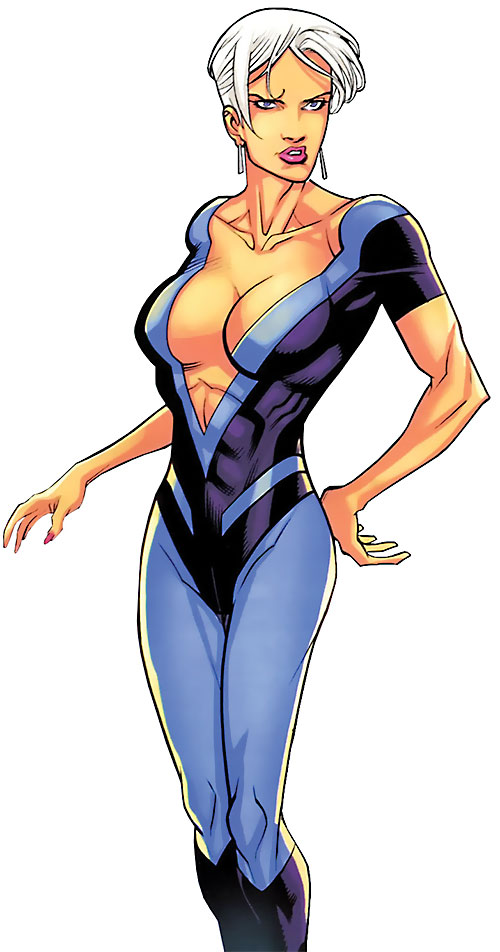 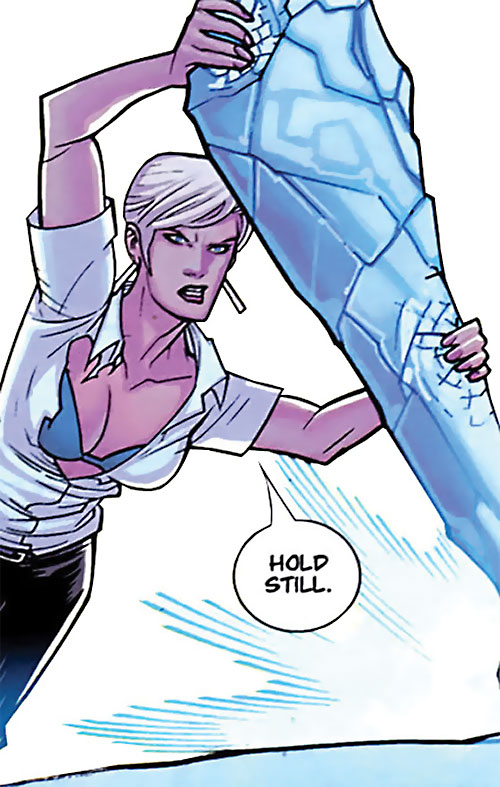 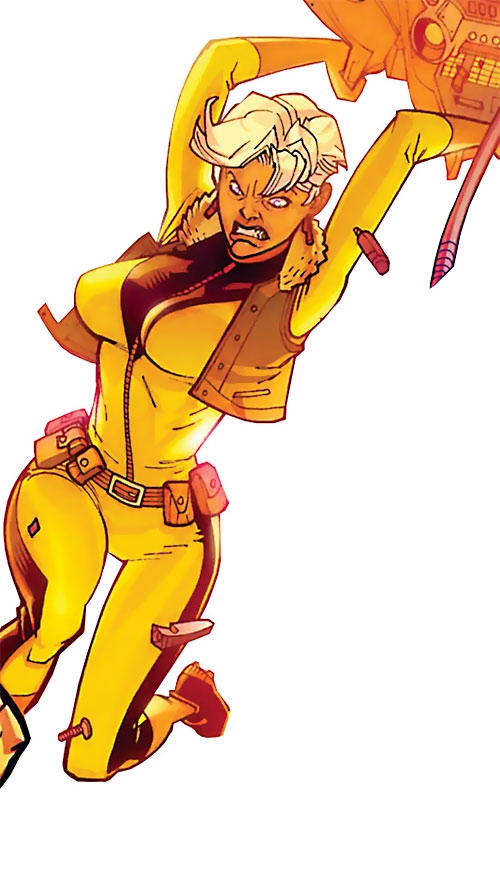 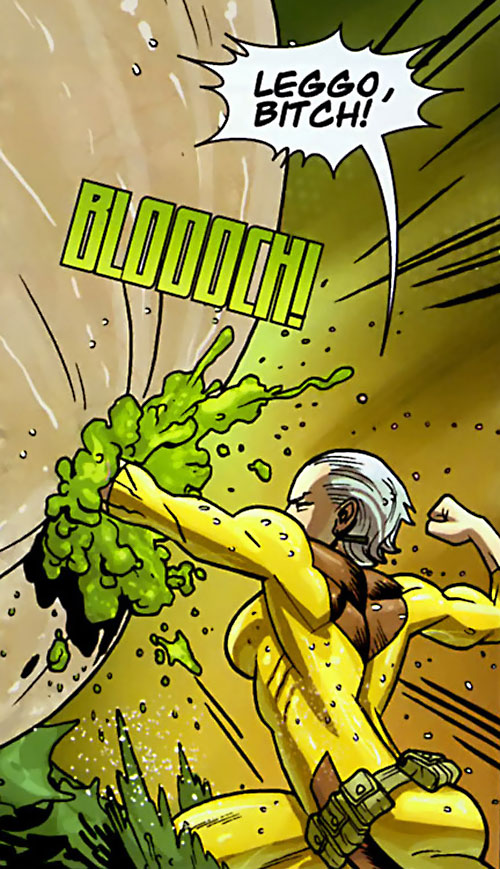