This writeup does *not* cover the version of Turner which was seen in the Richard Dragon miniseries in the early 2000s, which is thought to be an alternate continuity. It also stops as the 1980s Suicide Squad series end.

Ben Turner was trained by, among others, the O-Sensei. He was part of the legendary trio of world class martial artists Richard Dragon, Lady Shiva and Ben Turner, which are often recognized as the best in the world. In fact, he has a rare distinction of having once defeated the legendary Batman in hand-to-hand combat.

His style seems to be mostly a mix of undetermined hard kung fu styles and Tae Kwon Do.

Turner, due to his inner demons, has been passed in skill by both Shiva and Dragon – but there is no reason to believe he will not achieve the same level of mastery in the future. Ben Turner has successfully engaged superhuman targets in close combat.

Asides from his overwhelming martial arts skills, Turner is a highly trained and gifted special agent. He’s able to penetrate the most highly fortified installations, and perform astounding feats of espionage and paramilitary work.

He also has proven his worth as a leader, especially as field leader of the Suicide Squad.

Ben Turner was a happy kid in a middle class family in Central City – until, in his early teens, something got very, very wrong. One night, a burglar broke in the house and started to threaten his parents in the kitchen. Young Ben, who had gotten down from his bedroom to investigate the noise, froze when he saw that scene.

Ben then felt overcome by bloodlust, grabbed a kitchen knife and stabbed the burglar to death in an explosion of irrational, hysterical violence. The burglar and his father both died in the melee. Ben never recovered from this fateful night. He was now in close contact with a previously undiscovered reservoir of hatred and deadly violence.

The psychological monitoring he received was followed by martial arts training. It was hoped than the discipline, demystification of violence and physical exercise would allow him to overcome his troubles.

Student of the martial arts

Ben discovered that he liked martial arts, and was phenomenally gifted for them. He mostly studied Tae Kwon Do, but took classes at dojos all around Central City, working with practitioners of many forms. He still felt enraged, though, and the young tough and usual street fighter became a frequent sight for Central City’s police.

Turner continued throwing himself in martial arts, leaving America to travel the world on a shoestring. He met many martial arts masters worldwide, and obtaining training from most of them.

At roughly the same time, Bruce Wayne was undertaking a very similar program. Their paths crossed in Korea, at the feet of the evil and dangerous master Kirigi. Kirigi further corrupted Turner. He taught him to enjoy the pain he inflicted and relish in violence and negative energies. Turner fully accepted this teaching.

However, fate intervened. Turner’s next teacher was the O-Sensei – certainly the greatest martial artist of his time.

The O-Sensei had been, decades before, a Japanese military officer. During the Sino-Japanese war  his troops killed a Chinese monk against his orders. The officer wanted to engage the man in honorable hand to hand combat, not slaughter him using rifles.

Deeply ashamed by this, he killed the undisciplined soldiers. The officer was going to perform seppuku when the monk whispered something to him before dying. The man who then became O-Sensei broke his sword, renounced Japan and its army, and took the place of the monk. He became a master of both Chinese and Japanese martial arts as the years passed.

Turner crossed paths with Wayne again as a pupil of the O-Sensei, but a more important meeting was with yet another student, Richard Dragon. As the O-Sensei’s teaching cleaned much of Turner’s soul of bloodlust and violence, he enjoyed a strong friendship with Dragon.

Both men, when they left the O-Sensei, entered US government service and joined the CBI. They worked under the authority of master spy King Faraday.

The duo of martial arts masters became a trio when Sandra Woosan, aka Lady Shiva, joined them after having been a foe. This specialized team was phenomenal, and enjoyed great success. Things seemed to settle down for Turner, who even met and fell in love with a woman named Miyoshi.

The League of Assassins (an organization of killers secretly linked to international mastermind Ra’s al Ghul), however, wanted its revenge against Turner and the CBI. They killed Miyoshi to make Turner pay.

Turner sank back into anger and hunted down the League. But his rage made him careless and he was captured. The evil Sensei, head of the League, saw the heavy shadows in Turner’s soul and brainwashed him to become his pawn.

The evil Sensei has a tiger’s head mask fashioned for Turner. The mask was a focus for the brainwashing. With the mask on, Turner was no longer an individual but a bloodthirsty warrior with no other identity than the Bronze Tiger. Turner murdered on three continents during his time in the League of Assassins.

Faraday eventually came to the conclusion that the new, deadly fighter called Bronze Tiger was in fact Ben Turner, formerly one of his best agents. He mounted a special operation where colonel Rick Flag and the superhuman agent called Nightshade rescued Turner from the claws of the League. The CBI then started to undo the damage wrought on Turner’s psyche by the assassins.

Amanda Waller, who was working hard on rebuilding a Suicide Squad, came across Turner’s file and had him transferred to her. The Wall played a large role in turning Turner back into a person, deprogramming him.

Turner was made a key member and secondary field leader of the Suicide Squad. This government strike force that was composed of convicted super-villains and shady types, mostly motivated by the promise of having time turned into time served against their prison term. The field leader was colonel Rick Flag.

The Squad missions were hard, the casualties numerous and things kept going wrong. Eventually, Waller and the Squad went completely outside the law in hunting down and slaughtering the leadership of the highly dangerous criminal organization called Loa.

Waller went to prison, while Turner was mercilessly hounded by Sarge Steel, who was almost certain Turner wasn’t reliable. Pushing him hard and producing a replica of the Bronze Tiger mask, Steel had Turner admit that he still enjoyed violence and bloodshed.

Turner then fled, and his psychological stability started to unravel.

The gentleman or the tiger

When Waller got out of prison, it was to rebuilt the Squad. She knew that sooner or later there would be a crisis American intelligence couldn’t handle. An expendable, deniable force of powerful misfits would then again be needed.

She tracked Turner down – and discovered that he had become a violent, vicious mercenary and was enjoying it. Disgusted by the damage that had been wrought on her protégé, the Wall still recruited him to be the eventual field leader of the new Squad, after Flag died.

The missions remained hard, deadly and plagued with casualties, bad luck and friction. However, the Squad still delivered results, in good part thanks to Turner.

At first, Ben made it clear that he would only change his ways if that suited him. But in actuality he had started his journey toward redemption. He kept becoming less and less vicious and more and more a responsible, humane fighter – and crossed the Rubicon during the Squad’s last mission.

Hunting down an immortal dictator in the Caribbean, the Squad crossed a cursed jungle, whose mystical nature made inner demons manifest. Turner confronted himself as the Bronze Tiger, and managed to defeat his doppelgänger. Unmasking the Tiger, he discovered his own face as he was back when his father died. This ghost then vanished.

After his training with the O-Sensei freed him from being a fight junkie, the liberated Turner was a easy-going, happy-go-lucky young man. He enjoyed his adventures with Dragon and Shiva. He may have resembled his pre-Crisis characterisation during that time.

Things radicaly changed when he was trapped and brainwashed into becoming the Bronze Tiger by the League of Assassins. For the first time, the darkest desires of his soul were truly unleashed and he enjoyed the savage pleasure of being a remorseless killer.

He would have ended as many other psychopaths — jailed, killed or trapped in a degenerating spiral of violence — if it hadn’t been for Waller, who helped him to recover his sanity.

As the Suicide Squad’s second field leader, Turner acted as a mature, firm and somewhat ethical man. Most of the time he was a boon for Flag and Waller. However, he was also the team’s enforcer, who kept in line the most rebellious members (in particular the Enchantress), and didn’t hesitate to threaten or intimidate them when needed.

Sarge Steel’s harassment broke the barriers again and the Tiger became a fierce, somewhat brutal mercenary. He fought in third-world hellholes such as Ogaden and joining the Janissaries (Egyptian supersoldiers) for a time. He relished in the squalor and brutality, and was full of self-hatred.

Overall, Ben Turner’s adult life has been a struggle against his thirst for violence. This journey has been similar to a drug addict’s fight against his habit.

After first becoming the Bronze Tiger he was completely mired in it. After being deprogrammed he mostly stopped jonesing for deadly violence, but the addiction was buried, not gone. His second period with the Squad was a slow recovery, until he finally admitted his inner anger and made peace with it.

Now, Ben is again a sane man, but is aware of the beast inside him. As it often happens with weaknesses, accepting them (and controling them) ultimately makes him stronger and mellower.

(After stunning Stalnoivolk) “There is no such thing as true invulnerability. Struck with enough skill and strength, even a steel man can be brought down.”

(When Turner faces himself as the Bronze Tiger inside Diabloverde’s jungle)
Turner: “You somebody I know ?”
Bronze Tiger: “I am your anger. I am your pride. I will be your death.”
Turner: “Perhaps. But you will no longer be my master.”

In his Bronze Tiger days, Turner had a MPI, a Serious Rage and Traumatic Flashback (when faced with the Bronze Tiger mask).

His SPI and MIND were one AP less. He usually attempted to resist his Rage, since his training with the O-Sensei had left a deep aversion of killing even the League couldn’t overwrite.

Accounts vary as to how many people he personally killed as the Bronze Tiger, but it’s apparently lower than one would expect. When later ordered to kill as a Suicide Squad member he adamantly refused and crippled his opponent instead.

During his time with the League, Turner had the Psychopath Motivation and most likely a Low Connection League of Assassins.

Can a tiger change his stripes ?

While he was in a relationship with Vixen, they had a High Connection. It is possible, but unlikely, that they kept a Low Connection after they broke up.

During his second identity crisis, his Motivation changed to Mercenary, and his Minor Rage came back.

By Sébastien Andrivet, based on Mayfair and with the input of Capita_Senyera. 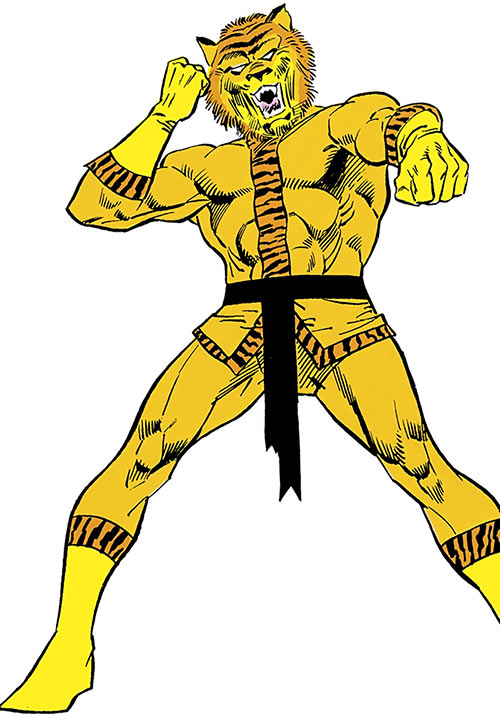 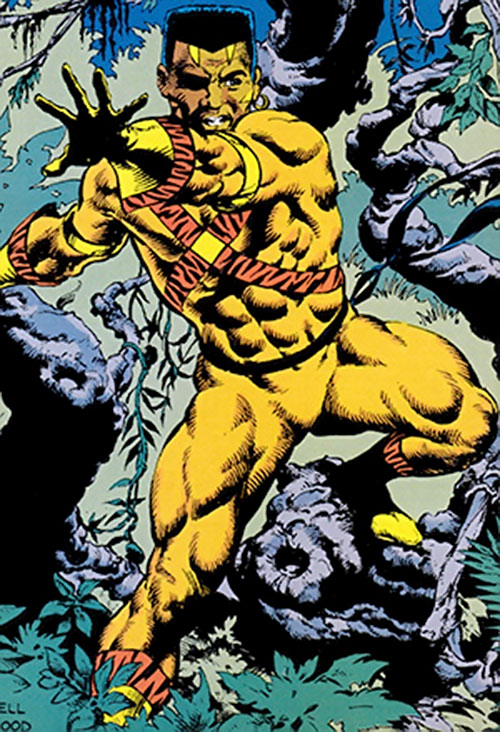 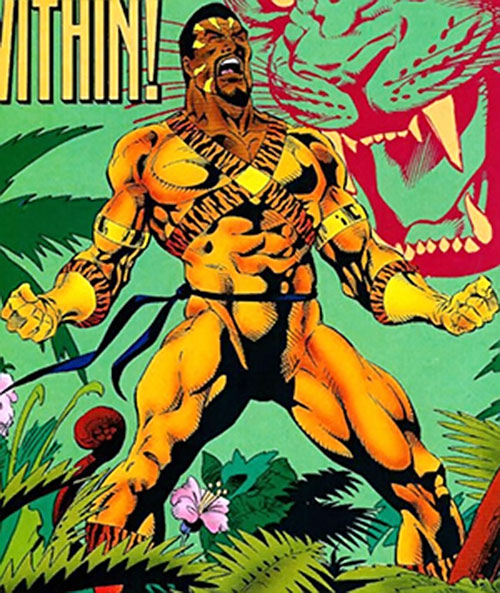 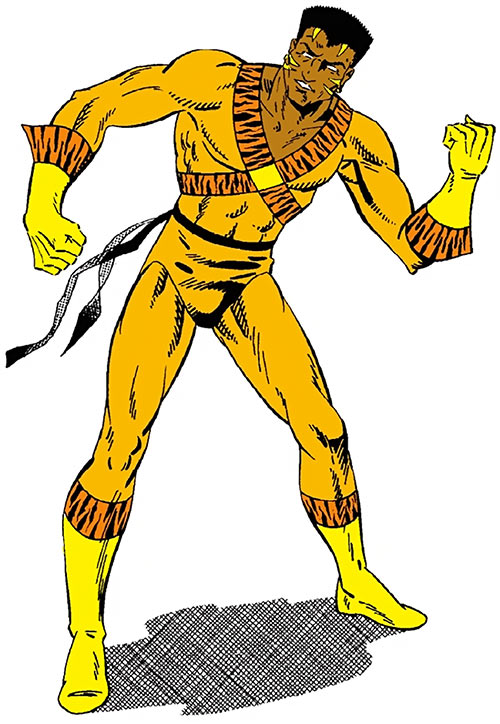