This profile assumes that you have already read our Brood species profile, which is rather handy to understand the concepts used here.

In 1988, a Brood party landed on Earth. That was half a decade after the war between the X-Men and a Brood clan allied with Shi’ar renegade Deathbird.

Though they were apparently from another clan – which we’ll arbitrarily name “Clan-1988” for convenience’s sake. And they apparently had precise data about Earth people, and in particular Homo Sapiens Superior mutants.

One telling detail is that they did not know that implanting an embryo within Wolverine would be pointless. Since that was an important fact in how the X-Men/Brood war was won, I’d assume they got their data about Earth mutants second-hand.

Perhaps they found incomplete records from Clan-1982 and/or Deathbird.

The landing party’s plan was to covertly establish a secret base. Their tool would be turning mutants into superhumanly powerful Brood warriors. That was a suicide mission, from which they did not expect to return.

The initial phase of the operation went fine. They crash-landed into the Rio Diablo mountains, close to a party of four vacationing in the wilderness. The Brood killed off three of them. Then they implanted a Brood Queen embryo into the sole survivor, a Denver paramedic called Harry Palmer.

This young Queen, and the embryos it could produce, did not quite follow the patterns of Brood reproduction previously observed in Clan-1982. In particular, Palmer was unaware that he was Brood. Yet the young Queen was inside him and monitoring him, and could take over his body and/or his mentality at any point.

The embryos it implanted into its victims followed similar rules. This allowed for maximum stealth. Most of the time the subjects themselves did not realise that they were Brood.

As a Denver Fire Dept. paramedic, Palmer was ideally-placed to encounter mutants – especially those undergoing the first manifestation of their powers. It first ’recruited‘ Palmer’s professional partner, paramedic Josey Thomas. Though she wasn’t a mutant, she would help him work faster.

A few other normal humans in useful positions (such as cops) were also turned into Brood foot soldiers.

In the following days, Palmer and Thomas encountered an unusual number of emergencies involving mutants throughout Denver. They duly implanted embryos within the mutants they served as EMTs. It is possible that the unusual number of mutant manifestations was caused by some sort of technology the Brood landing party had brought with it.

Everything was advancing quickly and according to plan. Yet bad luck had struck at the very beginning. Back when Palmer desperately fled the crash site, unaware that he had been implanted with an alien Queen, he ran X-Men Polaris and Havok off the road with his minibus.

The two mutants, who were returning from a vacation to their Colorado home, easily survived thanks to Polaris’s magnetic powers. They then investigated the crash site. As a result the X-Men, including several veterans of the X-Men/Brood war, started tracking down the invaders. 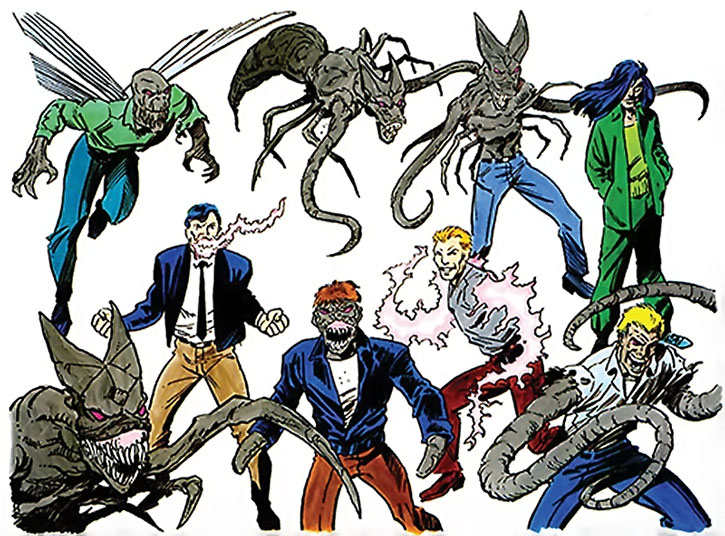 They eventually found Palmer in Denver, but were surprised by its behaviour and power. Then there was confusion when Wolverine killed two cops before his team-mates could realise they were Brood. This all gave enough time for the Queen within Palmer to summon in its Brood Mutants, who engaged the X-Men in combat.

It’s not over, Earthlings !

Unknown to the X-Men, however, the Brood within Josey Thomas’s body then launched the backup. It implanted another Queen embryo within the wife of a evangelist William Connover.

Fairly typical Brood, I guess. Evil, cruel, underhanded, brutal, bullying murderers and fighters. The Mutants will protect their Queen, Palmer, at any cost.

At any given point they might be humans (well, mutants) who have no idea of what’s going on, humans fully possessed by the Brood, or full Brood.

The stats block above covers the abilities shared among all Brood Mutants. However, they have individual capabilities that reflect their mutation. Those are :

Palmer could morph one of its hands into an egg injector, a claw-like appendage it used to stab into the belly of its victim to implant a Brood embryo. Palmer could use its Powers in either form, and partially or fully morph as needed.

Its Telepathy had a Special +10 Range Bonus when contacting its own Brood, and a +35 Range Bonus when communicating with other Queens. Palmer never did seem to be a “full” Queen when compared to other known examples, perhaps because it was very, very young. The X-Men apparently found it within a week or two of its birth.

Spitball was originally a mutant lawyer named Robert Delgado. It can spit out fireballs or plasma balls.

STR 06 Stretching (Only to extend range of limbs): 07, Accuracy (Grappling/Wrestling): 07.

Enhanced strength, particularly in the wings.

Stretching: 04, STR (Only for Grappling/Wrestling) 08.

Presumably a sort of specialised breeder, since it could implant a Queen egg. This normally seems to be the sole province of Queens. An agent kept in reserve, Thomas was jealous of Connover as it felt it should have been the Queen.

Thomas survived the war with the X-Men, but was later eliminated by the pod of Firstborns sent in to kill Connover. Having been in contact with Connover, it was considered unclean by the Mother Of Us All.

Those specimens with a higher BODY probably do not have the full Energy Absorption power. These Brood’s hide ability to turn energy beam attacks into glancing hits becomes rolled into the higher personal RV they enjoy.

It is thus likely that Divebomber only had two APs of Energy Absorption, Palmer only had one, and Brickbat did not have any.

Some of the stats for the Brood mutants are derived from the generic Brood stats, even where not clearly demonstrated. 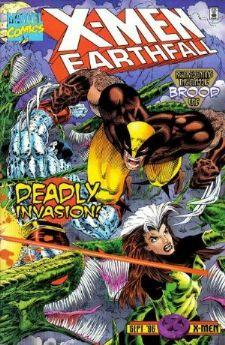 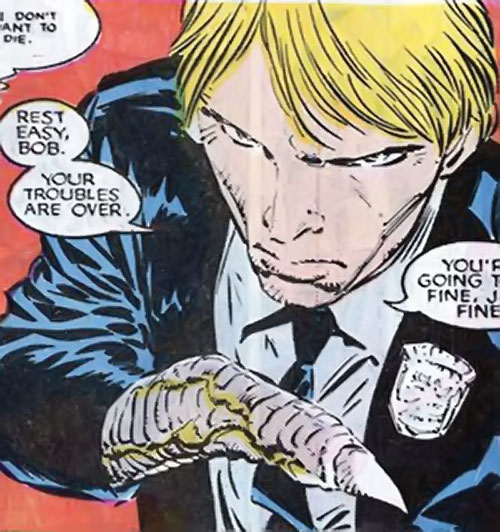 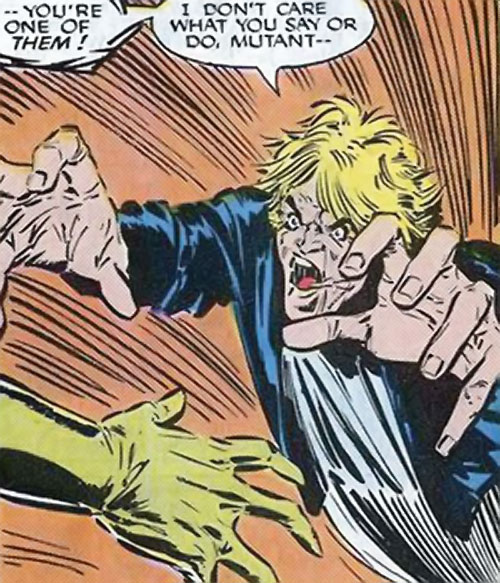 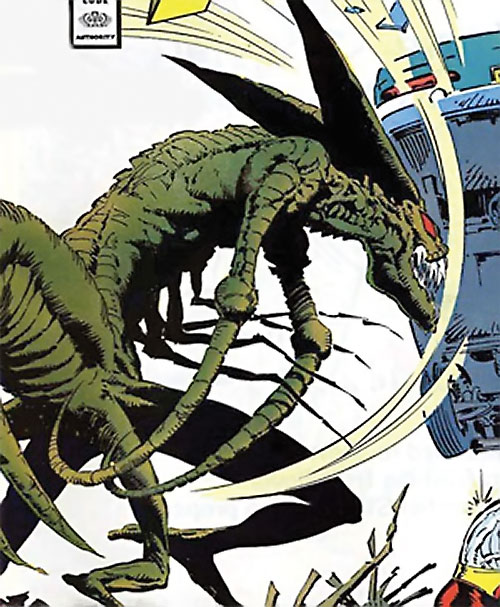 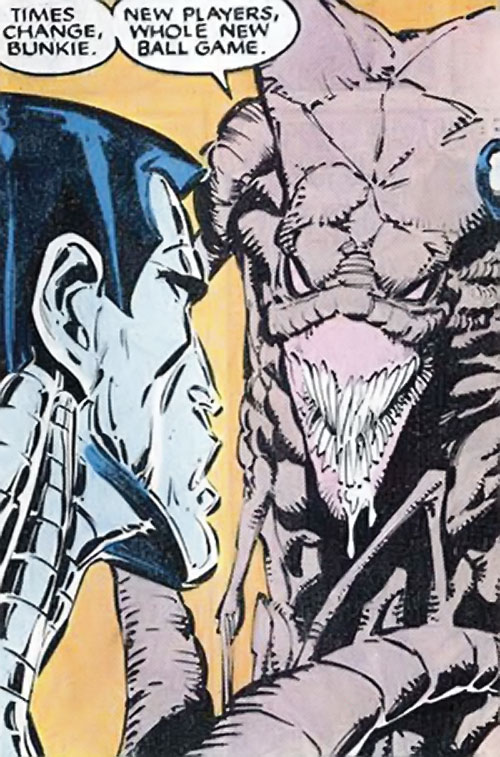 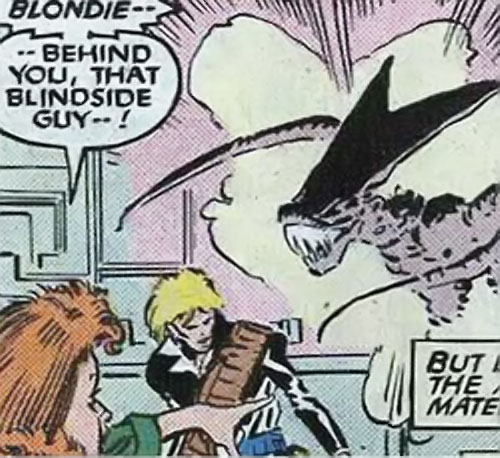 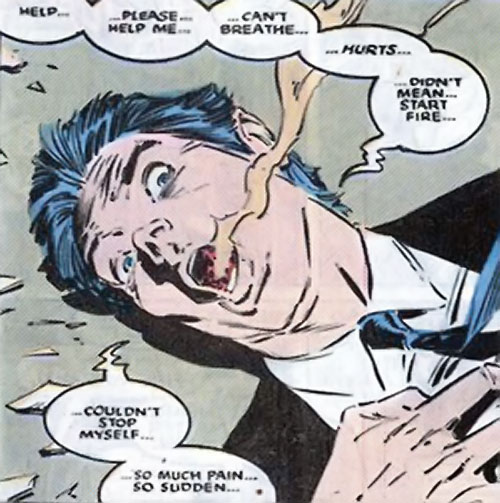 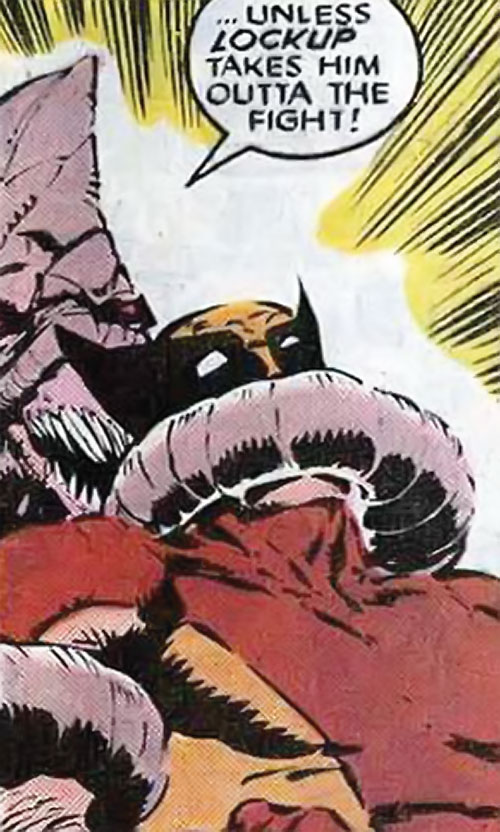 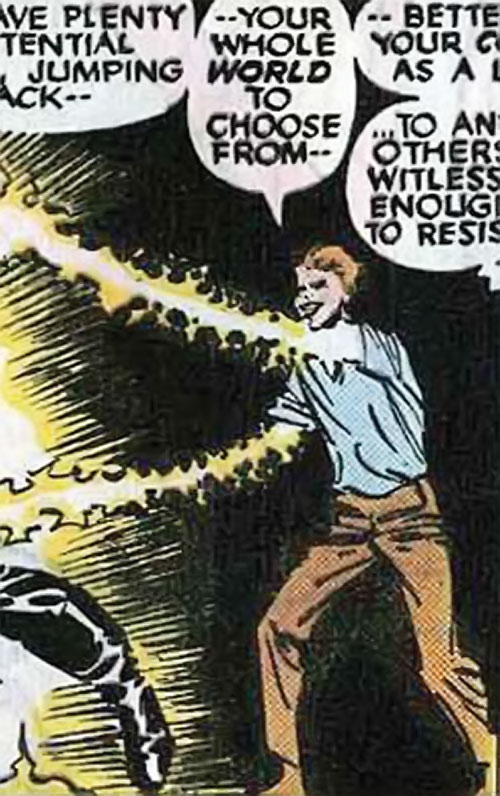 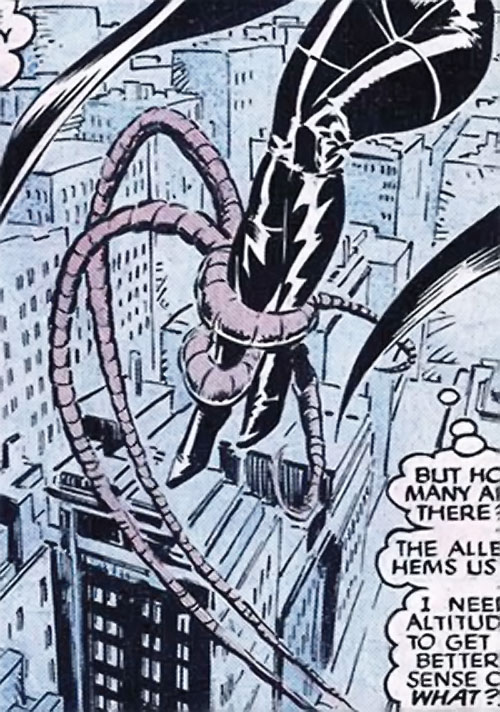 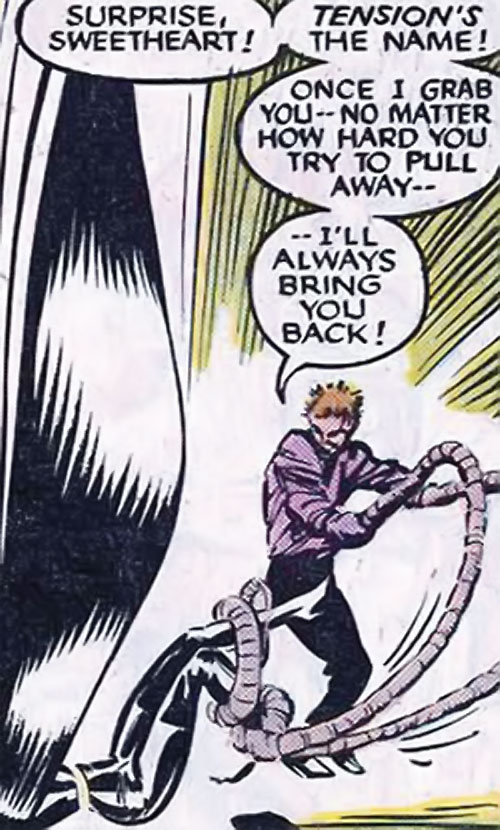 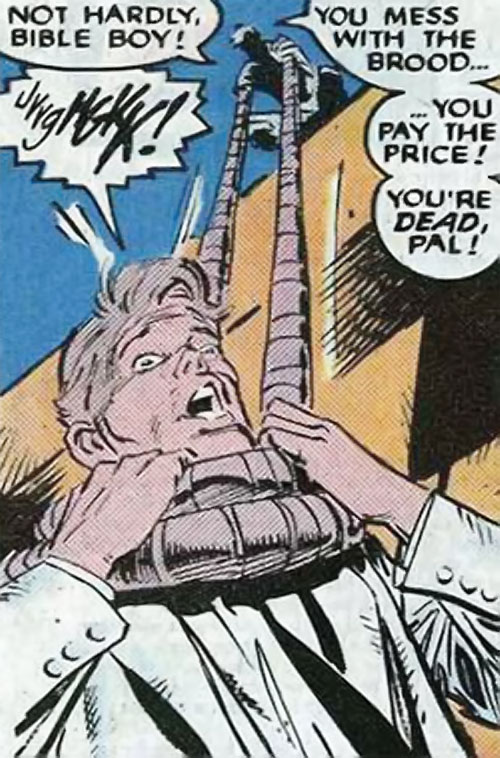 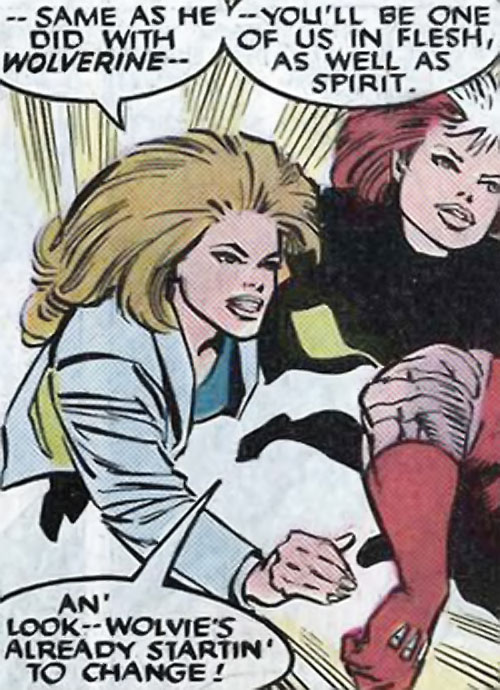 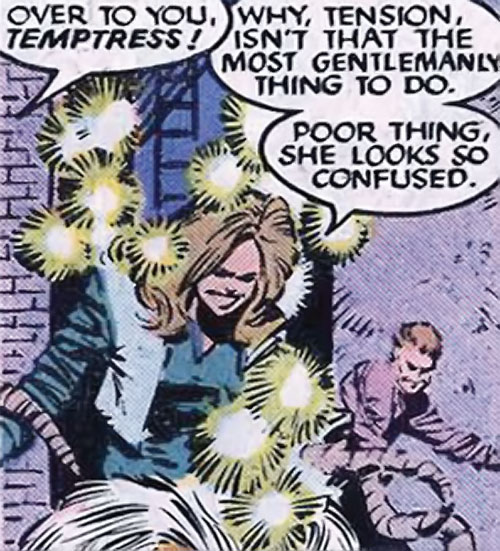