Broot was a member of the Omega Men, one of the B- or C-list DC comics of the 1980s. Our current Omega Men entries mostly exist because most people couldn’t find Mayfair’s Atlas of the DC Universe back during the 1990s. So it’s those stats mated with boilerplate Who’s Who material for context, and little more.

Broot’s immense size gives him extraordinary strength, and allows him to endure impossible amounts of punishment.

Unlike the rest of his race, he is a skilled hand-to-hand combatant, though he prefers to use force solely as a last resort.

Charis-Nar was born on the planet Changralyn. This is a world inhabited by immense and powerful humanoids who long ago had dedicated their lives to peace as prescribed by their ancient scriptures.

Though Changralyn’s doctrines were imperative, young Charis-Nar found himself questioning these teaching. He was thus ridiculed, and considered quite strange, by his peers.

In time, Charus-Nar married his soul mate, Kattayan-Besh, a woman branded with the same markings as he. Together, the two tried to live under the strict rules of Changralyn.

These were terrible times, as the evil Citadel controlled Changralyn and used the powerful populace for forced labor. But no matter how hard their plight, the people of Changralyn refused to rebel for fear of spiritual retribution.

The Citadel send Gordanian slavers to remove the children of Changralyn and bring them to an outpost mining colony. There, they would work until they died. But not even the abduction of their youngs could force a change in the ways of those of Changralyn. However, against all the scriptures, Charis-Nar refused to let his son be taken by the Gordanian slavers.

As Charis-Nar struggled against the slavers, a Gordanian murdered his child. In a rage never before seen in his race, Charis-Nar slew the Gordnanian. This action caused the Citadel to order an atomic reprisal. Charis-Nar was rejected by his people and exiled.

Eventually, Charis-Nar was sent to the Citadel prison planet. There, he eventually joined the Omega Men in their successful escape.

Later, searching for his wife, the newly named Broot found she was teaching Changralyn’s sacred scriptures in the depths of the Citadel mines. Realizing they could no longer be husband and wife, Broot left Kattayan-Besh behind in her peaceful existence as a slave. He rejoined the Omega Men to free the Vegan star system from Citadel tyranny.

Broot later questioned his violent ways, and ultimately rejoined his people to become a spiritual leader. He is known to have survived the Invasion .

By Ray Winninger for Mayfair (v1), modernized by Sébastien Andrivet. 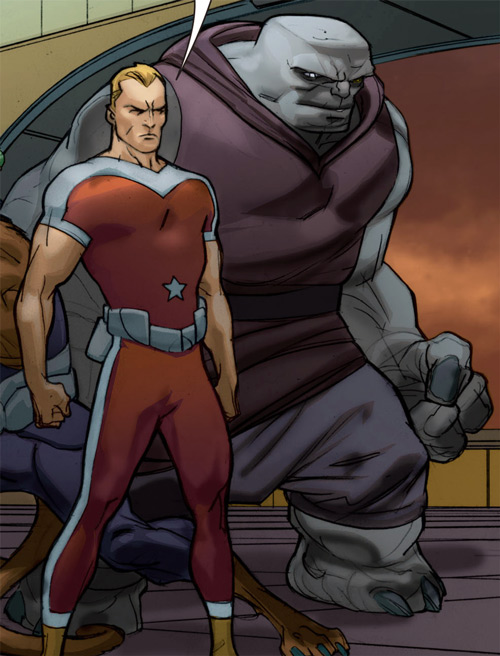