Marvel Comics stories feature a succession of Brotherhood of Mutants. These usually are militant and/or terrorist superhuman mutant cadres.

Early versions were called the Brotherhood of Evil Mutants. This was supposed to be ironic, see.

This specific version was the fourth to use the name. It appeared in 1979.

It was also the first version assembled by Mystique (Raven Darkholme), who would lead further Brotherhoods.

This Brotherhood is the one that became the Freedom Force. Which is covered in a separate article.

Purpose:
The Brotherhood works for Mystique. During this span, their documented operations thus follow two goals :

This Brotherhood of Evil Mutants has proven able to credibly oppose the X-Men or the Avengers. However, this power level often hinged on Mystique’s subterfuges and/or Destiny predicting their opponents’ actions.

Extent of operations:
Though most members aren’t American, their documented operations primarily took place in the US.

But they seem to have been globally mobile, with one op taking place in Hong Kong.

Major Funding:
Mystique and/or Destiny seem to be footing the bills. They do not seem to have any difficulties with this.

The other operatives presumably receive a compensation from Mystique. 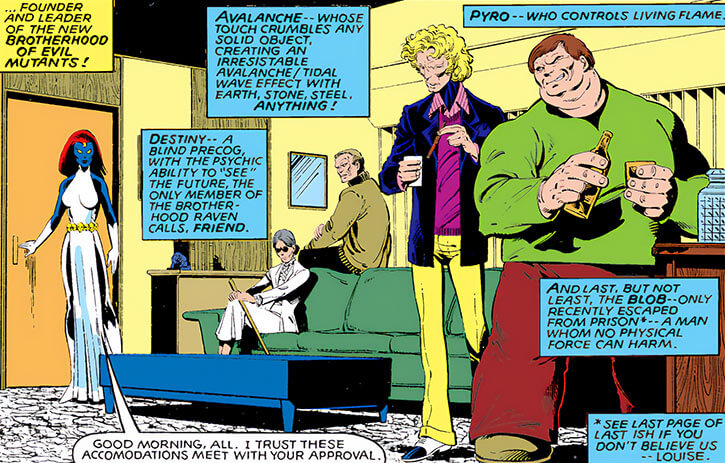 Organizational structure:
Mystique is the leader.

Let’s get a version which had the more New Wave-influenced production. Which IMO aged less well, but is also better to evoke this era. If you want a sparser, more mature version there’s the “Blazing Away” live one .

Mystique formed the Brotherhood after decades of experience with trying to change the world’s fate.

This work was based on the writings of her lifelong partner Destiny. A superhuman seer, Destiny had had many visions of the possible history of the XXth and XXIst centuries.

However, acting to prevent the more balefulMenacing, dangerous. visions had proven difficult and uncertain.

In 1979, Mystique was focusing on smaller-scale, and easier to handle, foretelling. Destiny had predicted that Ms. Marvel (Carol Danvers) would cause great harm to Mystique’s adopted daughter Rogue (Anna-Marie NLNNo Last Name.).

One of Darkholme’s attempts on Danvers’ life took place in Hong Kong. She sent Avalanche and Pyro after Ms. Marvel. They were overwhelmed.

However, the strike worked in a fashion. It prevented Danvers from continuing her investigation about the Hellfire Club. This broke for a time the causality chain that would lead to Carol encountering young Anna-Marie.

(My *sense* is that the Brotherhood may have existed for two years or so by that point. But this is just a vague impression from dialogue.) 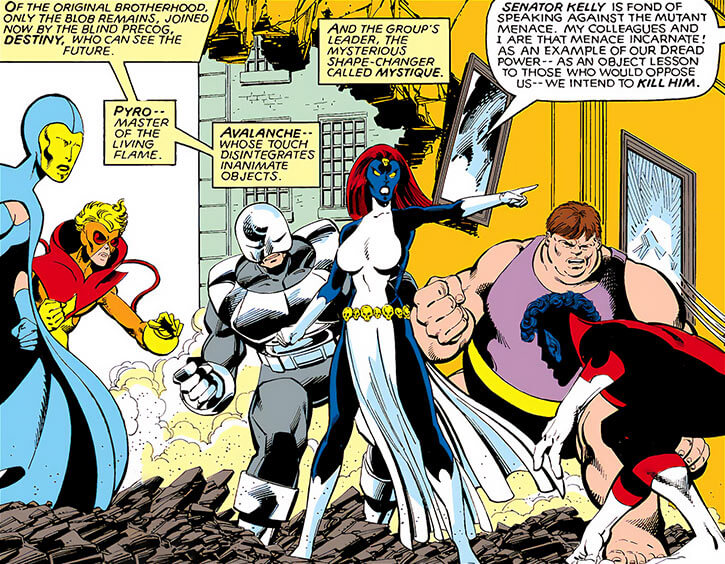 Days of future past (part 1)

In 1981, Presidential candidate Robert Kelly gave a speech before the Senate about the “mutant menace”.

Though it wasn’t apparent to most, this was a historical flashpoint. It was highly likely to lead to wars between baseline humanity and mutantkind. Which likely led to dystopian futures dominated by the Sentinel mutant-hunting robots.

Destiny had foretold this. But as always, she wasn’t certain of the best course of action to prevent this nightmare.

Days of future past (part 2)

Mystique opted for direct action. She would strike along with Destiny, Avalanche and Pyro – plus new hire the Blob.

(As he was fond of reminding the others, the Blob had been a member of previous, Magneto-led versions of the Brotherhood of Evil Mutants).

But as Destiny suspected, murdering Kelly would actually *increase* the odds of an anti-mutant dystopia.

To prevent this, a traveller came from the future. With the help of Rachel Summers, Katherine Pryde projected her consciousness into her past, in 1981. She “possessed” her own body back when she was 13, as Sprite of the X-Men. 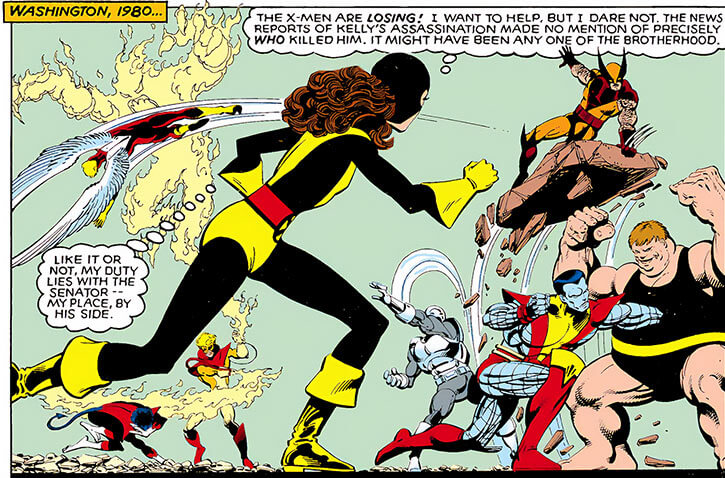 Days of future past (part 3)

They narrowly defeated the Brotherhood, and prevented Kelly’s death. Only Mystique could escape arrest.

The impact on the timeline remains difficult to assess. The Brotherhood’s strike, and the highly public fight with the X-Men, led to a new generation of Sentinel robots. But saving Kelly seems to have blunted and/or delayed the worst of the damage.

One could thus argue that, by attacking and losing, the Brotherhood won a major defensive battle for the fate of mutantkind.

Rogue tried to strike at Carol Danvers on her own shortly after. She accidentally and permanently absorbed Danvers’ mentality. Rogue’s attempt at protecting her future thus resulted in the foretold harm.

But it also made her much more powerful. Six months later, Mystique and Rogue thus launched a surprise strike at the Avengers.

This attack would clear the board. Then they could free the rest of the Brotherhood from Ryker’s Island without interference.

The battle of Ryker’s Island (or rather, one of them)

The op went swimmingly. Mystique immobilised Iron Man (Tony Stark) by passing herself for the Wasp (Janet van Dyne). And Rogue took out key Avengers, including Captain America (Steve Rogers) and Thor (Thor Odinson) for a while.

However, the Avengers adapted. Furthermore, they received help and intelligence from Spider-Woman (Jessica Drew).

Still, the Brotherhood held its own for a time.

Howbeit, the mutants underestimated their opponents – particularly Spider-Woman and the Scarlet Witch (Wanda Maximoff). The jailbreak failed, though Mystique and Rogue escaped.

In 1982, the Brotherhood captives were transferred away from population centres – to a remote part of West Virginia. A special Stark transport was used.

Mystique and Rogue therefore chose to strike at the Windust prison, rather than during transport. They impersonated the warden and a psychiatrist.

The operation worked at first. But they improbably ran into Rom, the Spaceknight. The pair could only free Destiny, and had to leave the men behind. 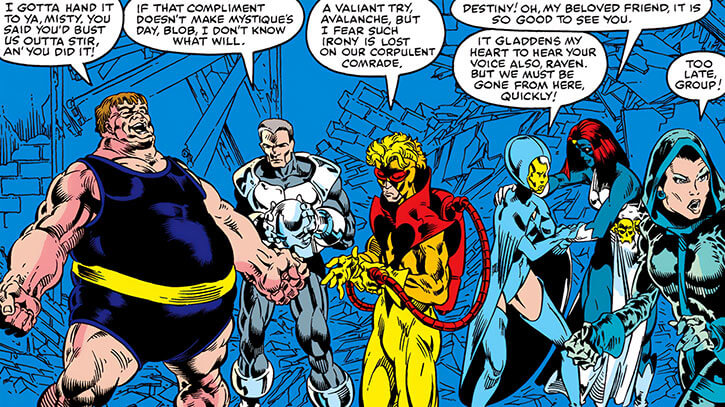 Horror is the Hybrid

Seeking shelter from a snowstorm, the trio ran into the Hybrid (Jimmy Marks). They narrowly struck a fragile alliance with the horrific creature, as they shared an enemy in Rom.

However, this… Sisterhood of Evil Mutants, I guess… soon realised that the Hybrid was far too monstrous and deceptive. They switched sides, which allowed Rom to banish the Hybrid.

Rom then simply left, as he didn’t know what to make of the situation.

The encounter with Rom encouraged Rogue to leave the Brotherhood and join the X-Men.

Mystique was beside herself with rage. She freed the Brotherhood, and they trained to kill the X-Men.

Their 1984 ambush was a success. It critically wounded Colossus, and Kitty Pryde was nearly slain while saving his life.

The next strike distracted the X-Men long enough for Mystique to invade the X-Mansion and shoot Professor X.

However, Rogue confronted Mystique, and convinced her to let go. Mystique demanded that her accomplices go freely in exchange for Xavier’s life, then vanished. 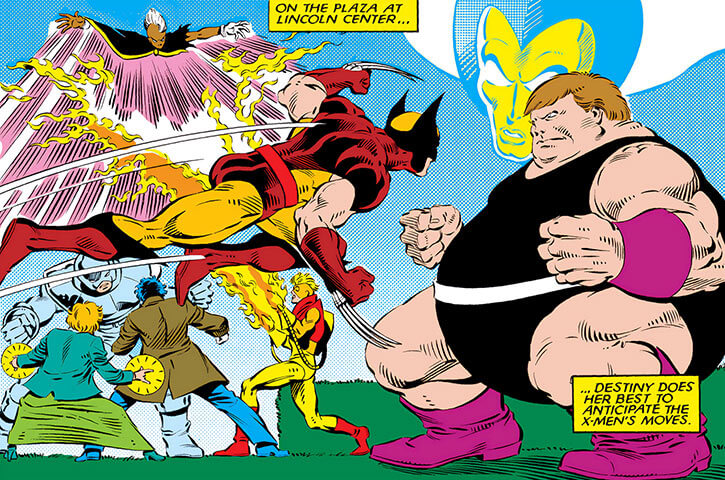 In 1985, Mystique approached Dr. Valerie Cooper – a Presidential adviser on superhuman affairs. She offered to have her Brotherhood become government agents.

She even proposed to rename her team the “Freedom Force”.

Dr. Cooper considered the deal, but she wanted a trial run first. She requested that the soon-to-be Freedom Force arrest Magneto (Max Eisenhardt).