The Grimm costumes have several kind of effects on their wearer :

When attacking, the Grimms usually throw the same object at the same time. In DC Heroes RPG terms, they are Team-Attacking.

Ages ago, when the Elder Gods were purging their realm of evil, the demon-god Chthon hid his foul essence inside Wundagore Mountain in Transia. The trees growing thereabouts were thus infused with Chthon’s mystic essence. And it was from one such tree that a local woodworker eventually carved a pair of foot long dolls.

Doll collector Nathan Dolly acquired the figurines. He was informed by their creator that he could actually make them move by transferring his spirit into the figures. Unfortunately for Nathan he tried to bring both dolls to life simultaneously and was trapped within.

Shipping his body and the dolls back to the United States through the mail, he was able, with the help of his wife Priscilla as well as extensive readings in the black arts, to shift his life-force from the figurines into a pair of life size mannequins. These were called the Brothers Grimm.

Turning to crime, he repeatedly battled Spider-Woman (Jessica Drew), who was never able to apprehend him. However, he did manage to capture her. Having Spider-Woman in his clutches, he was able to lure her sorcerer mentor Magnus into the picture.

Yearning to inhabit a human body, Dolly coerced Magnus into performing the appropriate mystic ritual. Pretending to go along, the mage instead sent Dolly’s spirit into limbo . Doll has not been heard from since.

But that was not the last of the Brothers Grimm.

Two brothers, Percival and Barton, co-owners of Grimes and Grimes Real Estate, took over the Los Angeles Theater where the rite was performed. This is how they found the costumes with which Dolly had garbed the life-size mannequins. The suits themselves possessed magic – apparently from having been in contact with Dolly.

Discovering this, the brothers turned to crime. This was but a hop, skip, and jump from the unspecified “questionable business ventures” in which they’d previously been engaged. Their first documented action was terrorizing the restaurants held by a hated business rival. But they were opposed by Iron Man (James Rhodes), who had them arrested.

Once out on bail, they were approached by the coalition of paranormal/macabre persons in the L.A. area, the Night Shift. The Grimes became steadfast members of that gang.

The Brothers Grimm, however, also maintain a second career as freelance mercenaries. As such they have worked for the likes of Crossfire or the Chameleon.

The Brothers Grimm are a morbidly zany duo. Their speech is often peppered with various strange fairy tale references. Their modus operandi seems to be ripped from the pages of some warped storybook. They entertain demented, moronic and nonsensical dialogue between them in most circumstances, especially combat.

The inherent greed of the Brothers seems to be the drive behind their mad schemes. It manifests in the form of wacky freeform mayhem.

“My god is money. Speaking of which, do hand over all of yours ! Or would you like to go bye-bye ?”

Brother 1 : “Back home on the West Coast, we’re known as the Brothers Grimm. When we’re not making magic….”
Brother 2 : “…we tell fairy tales. Here’s one of our favorites. ‘Four an’ twenty blackbirds , baked in a pie…‘”
Brother 1 : “’Switch the birds with dynamite, and watch the people die !‘” (both throw explosive pies.)

Brother 1 : “We prefer to call them feats of prestidigitation, Spider-Man. Elegant, unexpected….”
Brother 2 : “… and oh-so-deadly !”

They may be minor players, but the background and powers are pretty nice, especially for those GMs who like gratuitous creativity involving stupid non-technological gadgets  🙂

Come on, don’t be shy, have a blast with them.

The Brothers Grimm’s arsenal has included : 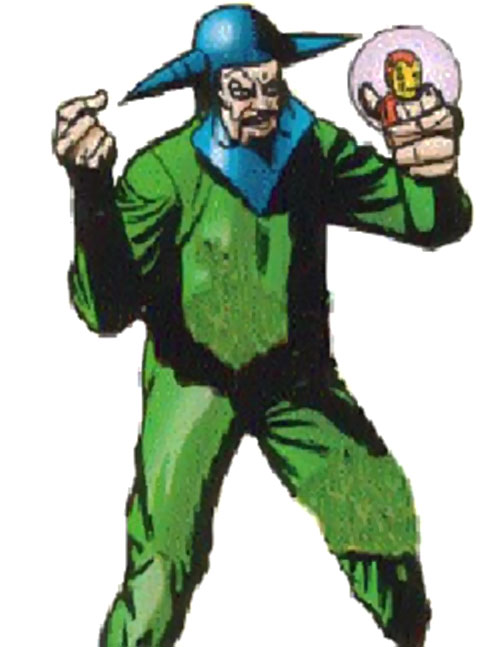