Reed Richards of Counter-Earth  is, undoubtedly, one of the greatest human minds on his planet. Like his counterpart, his skills include mastery of physics, spacecraft, electronics, research, mechanics, chemistry, logic, perception, mathematics and much more.

Due to the lack of superhumans on his world and the knowledge of existence of other dimensions, it’s reasonable to assume that he has no knowledge within these areas. As the Brute he relied on really heavy brute force with little finesse, but used surprisingly complex tactics against his opponents.

The Brute is superhumanly strong and tough, stronger than the Thing actually. Furthermore, for unknown reasons, he can grow a few feet in size if faced with heavy opposition. Like his counter-part he’s also very courageous and originally worked very well in a team (until the temper of the Brute made it much harder to do so).

The combination of intelligence and physical force made the Brute into a very, very dangerous enemy.

Prepare for an fabulous, unusual story. The Counter-Earth is a creation of the High Evolutionary. It is an almost exact copy of the normal Earth including it’s inhabitants and history. It is located 2 billion miles from the Earth, on the other side of the Sun and thus they cannot detect each other easily.

When Counter-Earth (home also to Adam Warlock and Dr. Strange the Necromancer) was attacked by mighty Galactus the High Evolutionary, aided by the Fantastic Four, opposed him.

The Reed Richards of this Counter-Earth was at that point working for the US Army with whom he witnessed the combat. The Army had pinpointed a certain asteroid in orbit as the Evolutionary’s headquarters.

Desperate for victory and survival, this Reed Richards took his recently built space-rocket. He left for the High Evolutionary’s base in order to find something they could use to secure their further existence.

Unfortunately, the rocket headed straight into a cosmic storm, just as he reached the asteroid. Thus, Reed was bombarded with heavy doses of cosmic rays, but nothing apparent happened. The ship malfunctioned and exploded, but Reed managed to fly away using a rocket pack on his back. He found an open latch on the asteroid and got in.

Inside he found a fantastic world of science and technology. Reed fanatically studied what he found and began looking for the asteroid’s creator. Instead he had an accident where he got a heavy metal pod on his head, which left him unconscious for many hours.

When he woke up, the Fantastic Four and the High Evolutionary had defeated Galactus and thus accessed one of the Evolutionary’s tachyon-driven space-ships in order to get home again. The Counter-Earth Reed Richards (let’s call him Counter-Reed) sneaked into the ship, in order to get away from space, and stayed hidden until they reached the normal Earth.

Upon reaching the orbit a strange sensation arose in Counter-Reed, a sensation that would soon prove to be quite lethal to the Fantastic Four.

An accident made the ship crash straight in Central Park, New York City. After the FF had departed, Counter-Reed found some clothing and a newspaper. In that newspaper there was an advertisement by the Frightful Four (the Wizard, the Sandman and the Trapster) looking for a fourth member.

At 1400 hours, any applicants should visit them in the Baxter Building itself. The FF who had seen the advertisement also immediately hurried there in order to stop them; unfortunately they were beaten and taken hostage.

Hidden under a hat and long coat Counter-Reed got into the queue of applicants (many of whom were never to be seen again). Among the lot were the Osprey, Texas Twister, Thundra (who wanted revenge on the Sandman, but failed), Captain Ultra and Tigra.

Realizing this extreme opposition all applicants hurried away. All save one.

This applicant, Counter-Reed, changed into a horrible, purple-gray humanoid being known only as the Brute. He fought the Thing then opened the lock of the gate to the Negative Zone , sucking Mr. Grimm in. The Human Torch was defeated by the Sandman. The Brute immediately became a member and shocked the others by changing back into Reed Richards.

Being hit on the head while in his spaceship had, apparently, left him as a sinister and evil version of his former self. Counter-Reed wanted to see Reed Richards dead, and when the gang wanted to get ransom for them instead from the state, Counter-Reed changed back into the Brute and attacked them.

The Wizard calmed down Counter-Reed to an extent by telling him he would get unlimited funds for his research. 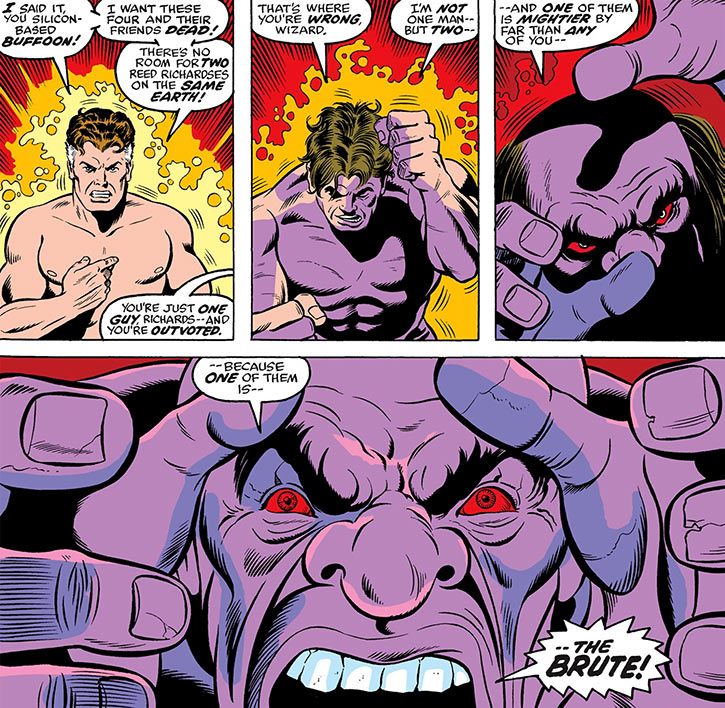 When time ran out, late at night, no money showed up the Wizard was going to kill the FF by electrocuting them. Luckily, the alien Impossible Man was, at that time, a visitor at the Baxter Building where he was watching TV.

When the broadcast ceased the Impossible Man became upset and thought that perhaps the television needed more power in order to continue. He therefore connected all the televisions to another power source in the power room.

Fortunately, this source was connected to the room where the FF where prisoners. The effect was that everything was short-circuited and the FF, along Thundra and Tigra, were released. They quickly defeated the Frightful Four except for Brute, who ran away with Reed Richards to the Negative Zone portal room.

When the FF arrived there, they only found Reed Richards, in his uniform, standing there. He explained that he’d managed to throw Brute into the zone. Unfortunately, this Reed was really Brute himself. He had thrown the real Richards into the zone, after taking his clothes.

Counter-Reed, now the leader of the Fantastic Four, began to plot how to eliminate them all. After some time, the team began to suspect that something was wrong since the aggressive Reed wasn’t himself.

When the Thing reclaimed the remains of a mysterious robot that had just robbed the bank to Counter-Reed, in order for him to study it, Counter-Reed proclaimed that it had come from the Negative Zone. Thus the Human Torch and the Thing were sent there, only connected to their home reality by a few cables.

Soon enough they found the real Reed, who was standing with Annihilus as they were about to be crushed by a giant in metallic armour. The Thing rescued them and took them away. Soon enough they realized that their wires had been cut and that this Reed was, indeed, the real Reed Richards.

Meanwhile, on Earth, the Brute was going to finish the Invisible Woman. He beat her unconscious and threw her out of the window from the top floor. The Impossible Man, Thundra and Tigra, who were back from a fake mission that Counter-Reed had sent them on, managed to save her. 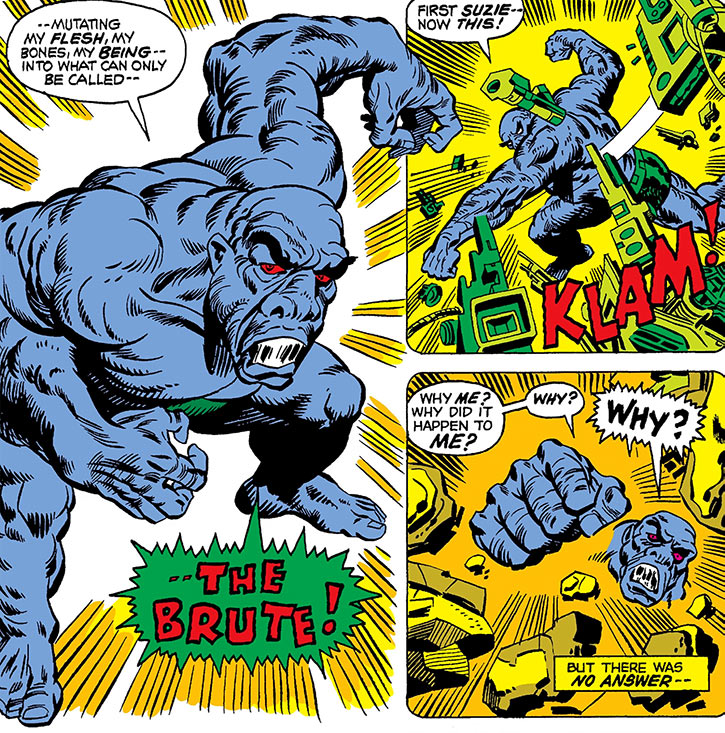 The giant in metallic armour, was under the control of the Mad Thinker, holding Annihilus’ Cosmic Rod. It rushed the gate back to the Earth and was faced by the Brute.

The Brute was soon changed back into Reed Richards of the Counter-Earth when he was attacked with cosmic rays. Counter-Reed was now his normal, sane self again, and regretted his actions.

All members of the FF arrived there soon enough and defeated the giant by taking the rod from him. The real Reed had saved the day again and reasoned that the rod had to be given back to it’s owner Annihilus. Counter-Reed, grateful that Reed had saved his own world from Galactus, and filled with guilt, realized what kind of man Reed Richards really was.

No longer wanting to expose anyone for danger, he took the rod and threw himself into the Negative Zone, in order to give it back to Annihilus, sealing the entrance while doing so. He was never seen again, AFAICT, but a man of his ingenuity could survive in the zone to this day.

Reed Richards of the Counter-Earth looks exactly like his Earth counterpart. Thus he’s lightly above average height and weight. Like the ordinary Reed, he was often seen in a suit or white lab coat on Counter-Earth.

While on Earth, he wore, while in hiding, blue trousers, a brown trench-coat and a brown broad hat. While the leader of the Fantastic Four, he wore the FF costume.

The Brute, OTOH, is a hideous, horrific and extremely muscular nightmare. His skin is purple-gray, his eyes are red, his teeth are white and big and his skin appears to be some sort of tough, gray leather. While the Brute, his only clothing is a pair of green shorts (see the parallels to the Thing and the Hulk here?).

Reed Richards of the Counter-Earth normally has exactly the same character traits and personality that Reed Richards has. Thus he’s a humanitarian, investigative, intellectual, a family man and fanatically interested in science.

After the incident that made him into the Brute he became sinister, scheming, aggressive and downright bad (a true evil reflection of Reed Richards). They still shared common habits, like smoking that pipe. It were these similarities that enabled him to pose as the Real Richards for so long.

He had a lethal temper and could casually kill someone before even realizing what he’d done. He more than anything wanted to destroy his good counter-part. Despite all this, he still felt love towards Susan Storm-Richards, who very much resembled his own Susan, who’s stuck in a coma.

Even in combat he was amazingly perceptive and analytical and managed to pull incredible stunts, such as opening the portal to the Negative Zone, casually. His opponents never expected that from a man of his temper and stature.

As Brute he was power mad and very often gloated about his superior strength and belittled his enemies. This Reed Richards was also schizophrenic and paranoid. He didn’t reveal his true intelligence to his opponents, instead letting them believe that he was a stupid thug, so that he could take them on unaware of the threat that he possessed.

“I said that, you dim-witted rat ! I want to see them and their friends dead ! There isn’t room for two Reed Richards on the same Earth !”

“You are wrong, Wizard ! I’m actually two men…” (triggering alter ego change) “… and one of them is stronger than all of you, because one of them is the Brute !! (’thrak !‘)”

“You don’t recognize me, eh ? Soon everyone will ! The whole world will know and fear… the Brute !!”

“Stupid woman ! With but one punch I’ll crush your force field like an egg-shell !”

“Against the mighty Brute all others are helpless… and all resistance is useless !!”

He’s either the counter-part of Reed Richards himself (if you use him, as he is, in the DC Universe) or the counterpart of another prominent, scientific hero. The Brute could be added to the Crime Syndicate of America given this background.

Or with a few changes you can use him as a template as that Earth’s version of Lex Luthor. The Crime Syndicate seems relatively benign and so the only extant hero having an attitude problem as a side effect of his powers is quite fitting.

In that case I’d give him the Hulk’s ability to get stronger (and dumber) as he gets more enraged. This would explain why the Crime Syndicate keeps him around. It’s like teasing a trapped animal.

Dr. Reed Richards of the Counter-Earth

Bonuses and Limitations:
Density Increase is always on and already calculated into stats.

Skills, Advantages and Connections:
The same.

Drawbacks:
The same and, additionally, Misc. Drawback (Cosmic rays can automatically trigger the changes between his alter egos, thus making Alter Ego into Uncontrollable, and leave him in his normal, depowered form for a period of time. This also makes him temporarily into his normal, sane self again.)

It is unclear whether or not he was restored permanently to sanity in that final battle. I doubt it, but in case you’d want to return him in his older, heroic guise, use these differences: 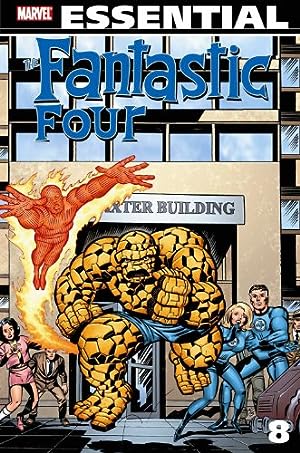 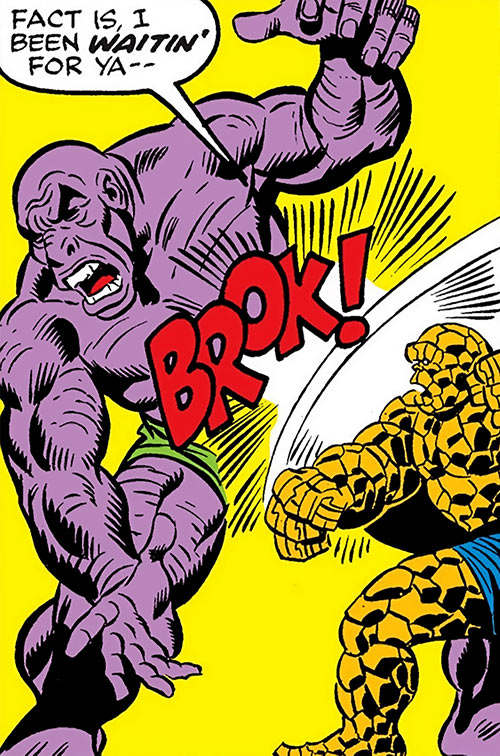 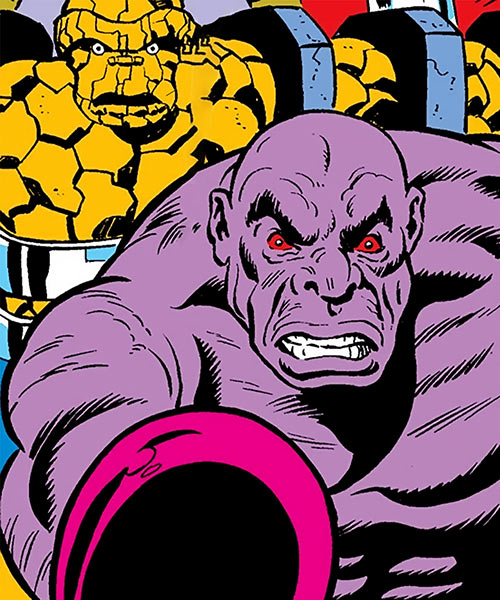 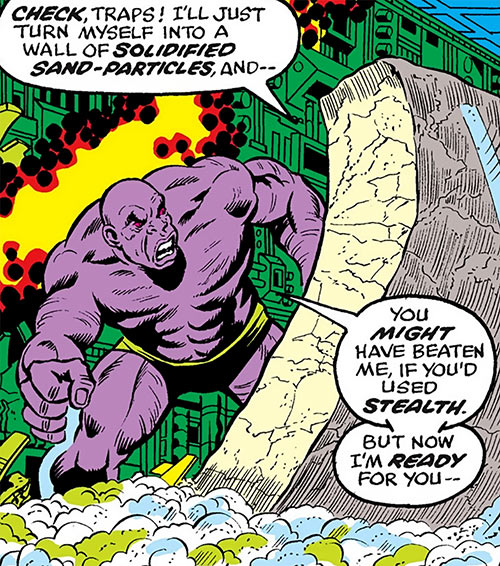