Powerpuff Girls was a superhero cartoon that aired from 1998 to 2005. The titular heroines — Blossom, Bubbles and Buttercup — are three little girls with vaguely Superman-like powers who defend a cartoon town against improbable menaces.

The show was a popular and well-reviewed one, with a distinctive style.

The goofy one-minute intro to the show.

Bubbles has the traditional generic superhero powers. Flight, strength, invulnerability, heat vision, and superspeed. She can also talk to the animals (or at least, the squirrels).

Like all the Girls, Bubbles is a proficient martial artist. She isn’t as tough as her sisters, but is usually the one who heals internal rifts in the team.

Blossom, Bubbles and Buttercup, the Powerpuff Girls, were created by Professor Utonium. He was an archetypal good-looking scientist-hero living in the city of Townsville, USA. The Professor used the traditional recipe: sugar and spice, all things nice…and Chemical X.

Bubbles is a tiny little girl, with blonde hair and enormous blue eyes. She wears a blue dress, with a broad black belt. When she flies, she leaves a blue energy trail.

Bubbles doesn’t seem to have fingers, but this impairs her not at all.

Bubbles is…well, bubbly. She’s at least as interested in little-girl things, like puppies, and toys, and playing, as she is in fighting crime. She doesn’t do all her thinking with her fists the way her sisters (especially Buttercup) do. Nevertheless, she’s a formidable opponent when provoked to violence.

She’s a sweet kid, if a little irritating at times.

(When asked if she knows where the Amoeba Boys are):
“Yes ! Buttercup yelled at them, and they left town ! So… no.”

Connections:
The Mayor of Townsville (High). 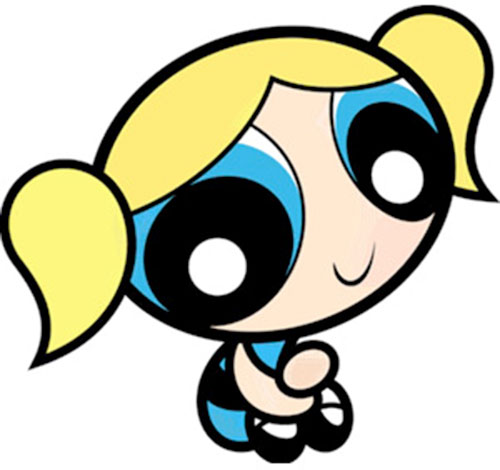 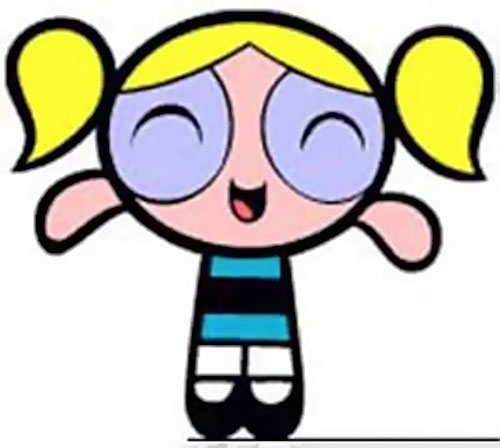