As a result of the experimental process he participated in, Buck Wild possesses superhuman strength and “tungsten hard” skin. His skin is durable enough to resist high caliber gunfire at close range, and is capable of absorbing the force of the impact of objects weighing as much as 1 ton with no visible signs of injury.

Outside of his raw physical power, Buck Wild is an accomplished street fighter with decades of experience.

In 1972, the young man named Buck Wild found himself in trouble with the law. He was arrested and sentenced to prison, but for a lesser crime than the one he actually committed (he plea-bargained for a lesser charge). While in prison, Buck decided that he would be a model prisoner, and take the time to educate himself and go “straight.”

Unfortunately for Buck, he encountered a particularly racist guard while in prison. As it turned out, Buck had dated his sister for a while, and the guard had taken exception to it. After receiving a particularly nasty beating from the guard, Buck realized that he most likely would not survive his prison sentence, much less make parole.

In order to escape the guard’s attentions, Buck volunteered to take part in a cutting edge experiment which would put its subjects into a state of cryogenic sleep. In exchange for his participation, he would have a few years removed from his sentence.

As it turned out, the experiment was flawed and the equipment exploded. As the smoke cleared, Buck stood unharmed and empowered with “belief-defyin’ strength” and “tungsten-hard skin.”

A few weeks after the accident, Buck Wild was selected to take part in a weekend furlough program. Recognizing the opportunity his powers afforded him, he immediately started advertising for his services as “Buck Wild, Mercenary Man, Hero for Rent!”

Ever eclectic, Buck found himself unable to settle on a single alias or even look for his superheroic identity. He swapped identities from time to time, coming up with new aliases including: Buck Goliath, Jim Crow, and Buck Lightning, but in the end he always returned to his original (and favourite) identity.

No matter what name he fought under, Buck battled crime and corruption for a fee. He smashed drug rings, and battled gangs. He quickly built a reputation as a hero amongst the impoverished African Americans that lived in the low-income areas he frequented.

Despite the fact that he was a mercenary, the inhabitants quickly realized that Buck had their best intentions at heart, especially when they realized that he had been lowering his prices and accepting payments in instalments in order to help every and anyone who needed it.

Buck eventually crossed paths with Dakota City’s premier superhero, Icon, when he fell under the influence of Lysistrata Jones, a local drug lord. Lysistrata had the power to enslave men’s minds, and to be honest, Buck’s mind was an easy target.

Icon’s partner Rocket had taken it upon herself to break-up one of the few remaining crack-houses left on Paris Island in order to release some of her frustration (she had recently discovered that she was pregnant). The crack-house belonged to Lysistrata. When Icon arrived (to calm Rocket down), Lysistrata sent Buck to drive them away.

Buck Wild battled Icon with all of his “belief defyin’” strength, but ultimately proved to be no match for the might of the Hero of Dakota. Icon ultimately freed Buck from Lysistrata’s influence and the two men decided to bring her to justice.

Almost comically, when the two men confronted her they were both immediately overwhelmed by Lysistrata’s influence. It was only the timely appearance of Rocket and a single well placed punch that freed them both from her power once more.

Several months later, Buck found himself approached by two teenaged girls who were looking for a replacement for Icon. The older of the two, Raquel revealed that due to her own pregnancy and Icon’s return to his own people, that the city of Dakota needed replacement heroes. Out of all of the people that she had approached, Buck was the best to play the part of Icon.

Buck was honoured at being chosen, and was still inspired by his previous meeting with Icon, graciously accepted. He went to work immediately, studying black literature intensely in the attempts to improve his knowledge of his people and to improve his vocabulary.

After a few short weeks (and a slight alteration of Icon’s original costume), Buck assumed the costumed identity of Icon and continued to fight the good fight against anyone who would threaten the peace within Dakota City.

Buck’s good fortune came to an end when the homicidal alien Oblivion arrived in Dakota seeking vengeance on Icon. Oblivion had murdered dozens of innocents by the time Buck had arrived on the scene. Fearless to the point of overconfidence, Buck engaged the psychotic alien in a one on one battle.

Despite the vast difference in their strengths, Buck continued to fight until he moment when Oblivion ultimately delivered a mortal wound through his chest. Though Oblivion was defeated by the original Icon, Buck eventually succumbed to his wounds while convalescing in a hospital.

He was temporarily resurrected as Buck Voodoo by one of his oldest foes, the Kingfish, who was enraged that Buck died at another’s hands. Upon his resurrection, Buck initially attempted to kill the Kingfish, but ended up surrendering to death once more after Darnice (Rocket II) convinced him that his time had passed.

Buck Wild was a tall African American male. He had a broad and wide chest, and had layers of thick muscle that ran across the entirety of his body. His features were fairly typical of those found in African American males and his skin was a dark brown. He styled his hair into a thick afro and held it in shape using a golden headband.

His original persona’s costume was a simple one. It consisted of golden bikini briefs, an open sleeveless shirt, boots, and head- and wristbands.

As Icon II, Buck wore a modified version of Icon’s original costume. His version still consisted of a skin-tight red body suit that covers him from head to toe, except for a large triangular hole that sat directly within the centre of his chest. The significance of this gap is still unknown at this time.

The rest of the costume was identical to the original. It was accessorized with golden thigh and armbands, a golden ring that sits prominently in the centre of his massive chest, grey gloves and boots, a black domino mask that made his eyes appear to be pupil-less and a disproportionately long green cape.

Buck Wild was a simple, gregarious man. He embraced life to the fullest and did his best to help the less fortunate that surrounded him. He worked hard and did the best with what little he had. When empowered by the experiment he still chose to go “straight” rather than succumb to the negative emotions that surrounded him.

Even though Buck spent most of his life as a “Mercenary Man!”, he genuinely cared about the community that surrounded him. He would often help those who needed it for free (or at the very least at a steeply reduced price).

After he encountered Icon and Rocket, Buck improved himself through sheer force of will. Over time he completely altered his manner of speech, shed his 1970’s blaxploitation façade, educated himself and became a genuine true to life hero.

“Bullets bounce offa my tungsten-hard skin like they was chicklets !”

“Once I lay a taste o’ my belief-defying strength on you, you’ll be out of the count in a Uncle Ben’s instant !”

“Fear not, fair maiden. As long as I draw breath, the forces of good shall e‘er have a champion. So swears ICON !”

“Many thanks, my Nubian sister. This is just another example of how cooperation between Black men and women will lift our race to parity with the oppressors.”

“You ran a red light, my brother. Don’t you have any respect for your people ? A black man invented the stoplight ! ”

(While interrupting Oblivion’s attack on Rocket II)
Oblivion: “I won’t stop myself. And you can’t stop me.”
Buck Wild: “She doesn’t have to … I will.”

(To Oblivion while they first clash)
“I guess it shouldn’t surprise me that I don’t got… ah don’t have any idea what you’re talking about. I didn’t used to understand much of anything. But that was before I met Icon. He taught me that I could be more that what I was before. Well sir, he was right. Now I am Icon. And I may not be as good as he was. But I’m more that good enough to stop you.”

With the merger that occurred between DC and Milestone Universes during the “World’s Collide” Crossover, it is apparent that the Milestone Universe is one of the alternate universes that remained after the Crisis.

With this in mind, all of the events of Icon actually occurred in the DC Universe, and that Icon or Rocket could be encountered by the player characters through the clever application of the Dimensional Travel power.

After the events of the Infinite Crisis and the New 52, the characters of the Milestone Universe are folded directly into the DC Universe, and Dakota city is presumed to have been always present.

If Luke Cage (a.k.a. Power Man) also exists in your campaign they may have been subjected to the same treatment (since Buck Wild is an obvious Power Man clone). With both characters in the same universe, one of them should be played with a different personality to avoid redundancy.

One possibility is that Buck Wild could actually accept a job with the local police department. This might bring him into conflict with Luke Cage, particularly if Wild falls into the unfortunate habit of some American minority police officers to be unusually harsh on members of their own ethnic group.

If Wild was employed in such a manner, he would have to have established his innocence or received some form of special dispensation, since a felony record would normally prohibit one from becoming a police officer.

Dropped Buck’s STR by an AP since he’s never really displayed strength greater than the character he is clearly an homage to; “Luke Cage: Powerman”. 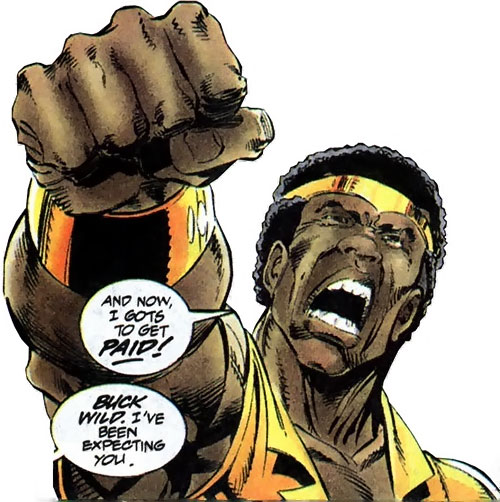 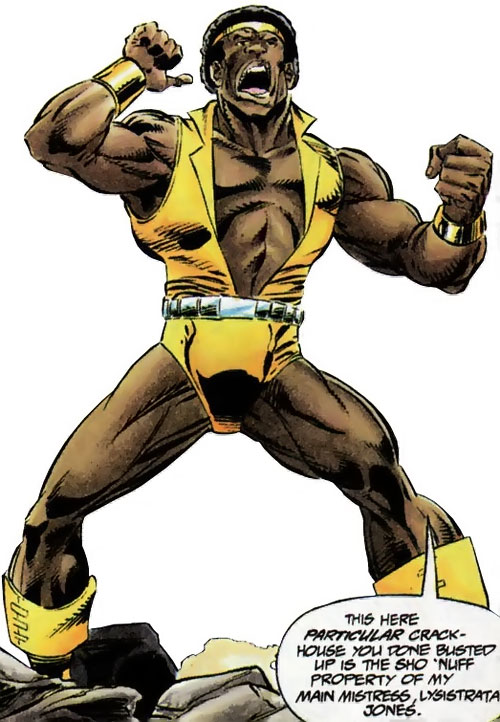 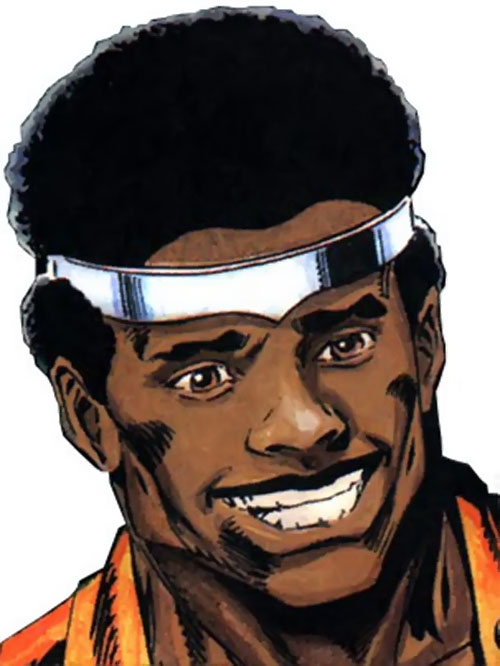 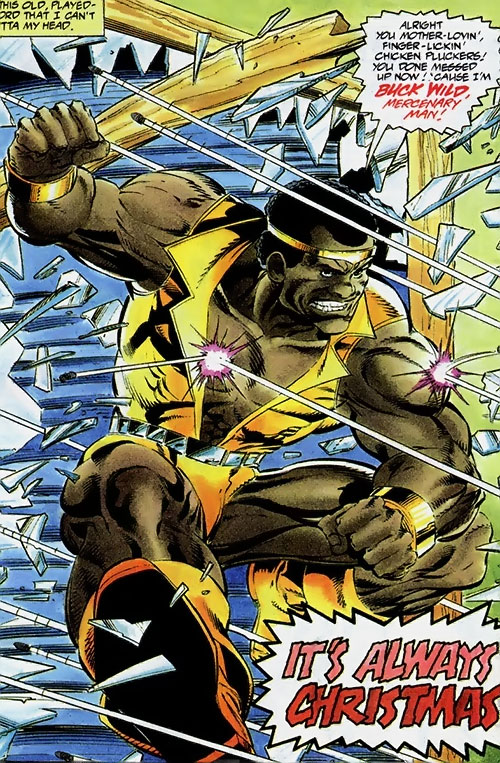 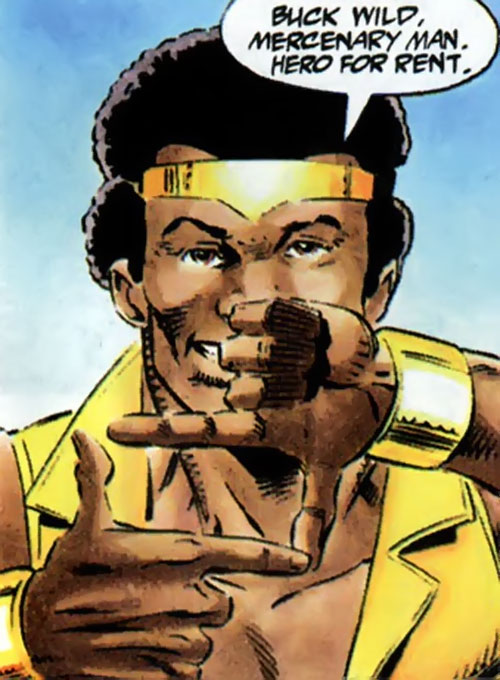 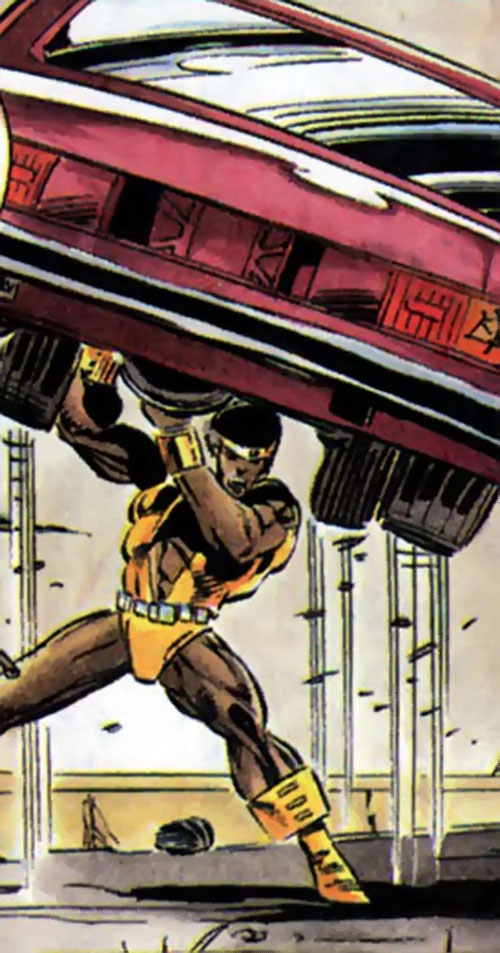 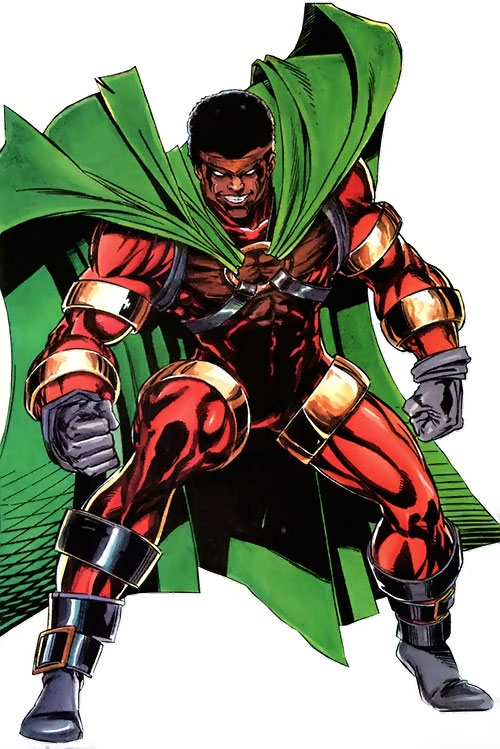 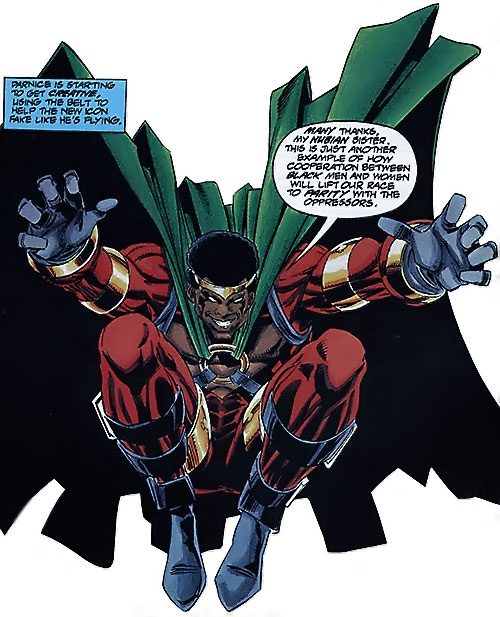