He’s trained in hand-to-hand combat and acrobatics, and has a basic military background.

Hoskins is also a huge man in superior shape, and was powerfully built even before his musculature was enhanced.

Lemar Hoskins mentioned being from Chicago. Given his poor education, it seems likely he was from some tough inner city with few opportunities. He also mentioned that he knew what it was to go hungry.

Hoskins enlisted in the Army, and met John Walker during boot camp at Fort Bragg. They soon became friends, and later became good buddies with two other soldiers, Jerome Johnson and Hector Lennox. Although all four demonstrated exceptional physical skills, they never got to do anything interesting.

They thus quickly grew bored with military life and did not reenlist. It was only after discharge that the aimless quartet started contemplating their next move.

(In the real world nobody does boot camp at Fort Bragg, home of the 82nd Airborne and the Special Operations Command. Our No-Prize Hypothesis  is that in the Marvel Universe, exceptionally strong and fit recruits (like Hoskins and his friends) are sent to a SOCOM camp at the end of boot camp to test for potential to become power armour  operators. None of the four passed.)

The ex-soldiers were approached by an agent of the Power Broker. This fellow was scouting for men in great shape who could withstand the Power Broker treatment. Intrigued by his pitch, the former soldiers agreed to the offer and were flown to Los Angeles for medical exams, then entered the Power Broker process.

Remarkably enough, all four survived and gained superhuman strength without suffering any side-effect.

As per standard Power Broker procedure, they were directed toward the Unlimited Class Wrestling Federation. There they could become masked fighters to pay for their enhancement procedure.

However, as they queued for the tryouts, a shady type called Ethan Thurm offered to buy their contracts if they joined his “Super-Patriot” scam. All four decided to jump on that ship.

Thurm had the charismatic Walker become the costumed Super-Patriot. The Super-Patriot made numerous appearances to rally Americans and develop his fame, which Thurm intended to turn into a huge revenue stream. A component of this was to fake attacks on the Super-Patriot, to get media exposure and to drum up support.

The other three, wearing Captain America masks and military fatigues, played the part of the BUCkies (Bold Urban Commandos). These were superhuman “militiamen” who attacked the Super-Patriot in public on several occasions. 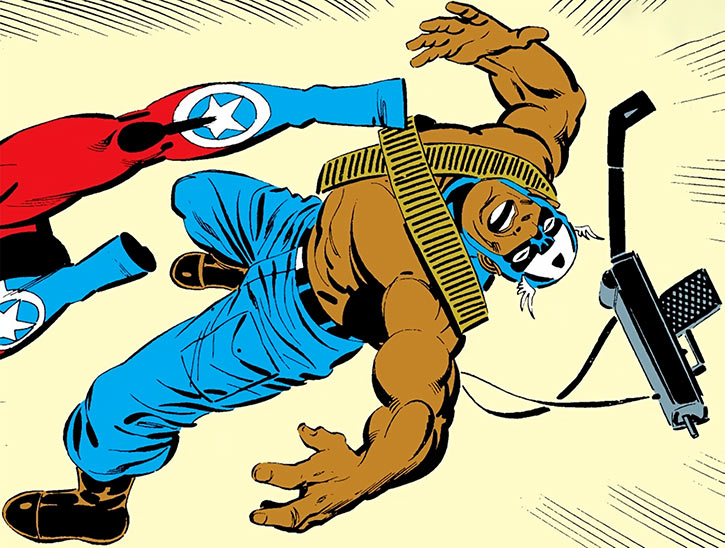 To lend credibility to the notion of BUCkies being nationalist agitators jealous of Super-Patriot, Hoskins, Johnson and Lennox also ran minor terror attacks. These included assaulting foreign students and torching their housing after covering the area with xenophobic (and misspelled) slogans.

Hoskins and his friends were satisfied with Thurm’s scheme. They were free from their Power broker contract, they enjoyed terrorising defenceless foreigners, and the staged fights were very much like the superhuman wrestling they’d been considering.

However, Walker was then approached to become the new Captain America. While he intended to have Thurm and his buddies work with him, the Commission on Superhuman Activities vetoed Thurm. The FBI rejected Johnson and Lennox after a background check. Hoskins was the only one to get in.

Since he was to be Captain America’s fighting partner, making Lemar the new Bucky was the obvious approach.

Hoskins was enthusiastic at the idea that he and Walker would be the new Bucky and Captain America. Led by Dr. Valerie Cooper, the government organised training sessions, and clad him in a slight variant of the historical Bucky uniform. Furthermore they gave him lessons to compensate for his catastrophic education, starting with remedial English and following up with civics.

Meanwhile, Thrum started threatening Walker and Hoskins with blackmail. Hoskins’s first reaction was that they should just murder him, and Walker eventually concurred. Walker stole two Guardsman armours and he and Hoskins, disguised as Guardsmen, terrorised Thurm and their friends so Thurm would drop his blackmail scheme.

Walker eventually confessed about this to Dr. Cooper. She nevertheless kept the program running, since she had nobody else to wear the Captain America costume.

Once properly trained, the new Captain America and Bucky were sent to handle minor matters to build a track record.

Hoskins was relieved that they weren’t sent against a major menace. On the other hand Walker felt conflicted. The pair were sent to locate and arrest reactionary militiamen calling themselves the Watchdogs, and Walker was almost certain that those were people with whom he shared ideals. 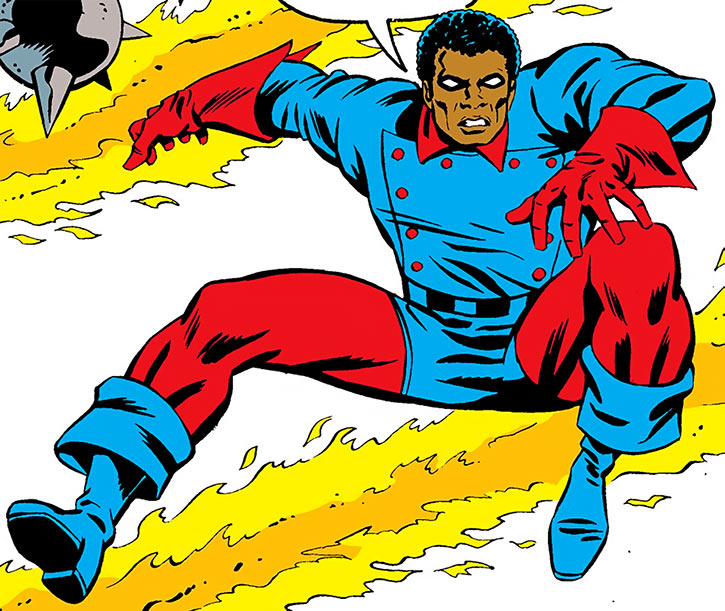 The two men eventually set up a plan. Hoskins passed himself off as a pornographer recruiting models in the small town wherein the Watchdogs were operating. Posing as an outraged passer-by, Walked faked a brawl with Hoskins to convince the Watchdogs that he was prime recruitment material.

The plan worked, but the Watchdogs drugged and kidnapped Hoskins. They nearly lynched him since Walker didn’t want to intervene to preserve his cover. Thankfully Bucky’s superhuman metabolism allowed him to recover from the drugs just in time to break the noose and beat up his captors.

Hoskins and Walker continued to train hard. While early on their performance had been indifferent, they soon demonstrated increased competence, and evidenced good teamwork. Hoskins saw how useful Walker’s shield was, and convinced the government that he should have one too.

While he and Captain American (John Walker) were helping bring a situation at the Vaults super-prison under control, Hoskins was approached by an older African-American corrections officer. He told Lemar that “buck” was a racist insult in some parts of the country.

He also suggested that since Hoskins was one of the few African-American heroes, it wasn’t right that he use the name of a long-since-dead White boy. He should have his own name.

Hoskins was swayed by the officer’s argument. His Washington handlers — who did not know about the “buck” slur either — immediately agreed that the name should be changed. Hoskins and his handlers agreed on the name “Battlestar”.

A new red, white and blue costume was also designed that made Lemar look like Cap’s partner rather than his sidekick.

Originally, Hoskins is a brutal, prideful and ignorant thug. His solution to almost any problem is violence, and his solution to persistent problems is murder. He’s crude, as eloquent as a drunk cement mixer, sloppy and somewhat lazy. His main redeeming feature is his iron-clad friendship with Walker.

Hints that he was a better man than that appeared when he was recruited to become the new Bucky. He trained seriously, was proud of having been recruited, and — to Walker’s amazement — was obviously looking forward to all the remedial classes he was taking.

On the other hand Hoskins’s morals remained dubious. Furthermore, his temper remained a hair-trigger one during his entire career as Bucky. But this too would later change.

Lemar expects racism from any White person who meets certain criteria – particularly a Southern accent. He will be clearly wary and antagonistic toward such persons. If they turn out not to be racists, however, Lemar will immediately relax and act in a friendly manner. This is how he became John Walker’s best friend.

“Your kind makes me sick ! You traitorous foreign lowlife — I’m wise to you. You pose as students but yer actually here to spy for Khaddafy ! […] Libyan, Algerian, Iranian — yer all the same. Yer all out to do America dirt — an’ this is one proud American who ain’t gonna stand for it !”

(Looking at Freedom Force) “Once we’re set to boogie, those guys’ll be fifth wheels.”

(After Walker kills Professor Power) “Well, the boys in Washington told us to neutralize him at *any* cost. And that’s just what you did. They’re gonna love us.”

The Military Science and Weaponry Skills in our game stats are reasonable assumptions. But they never were clearly demonstrated on-panel. 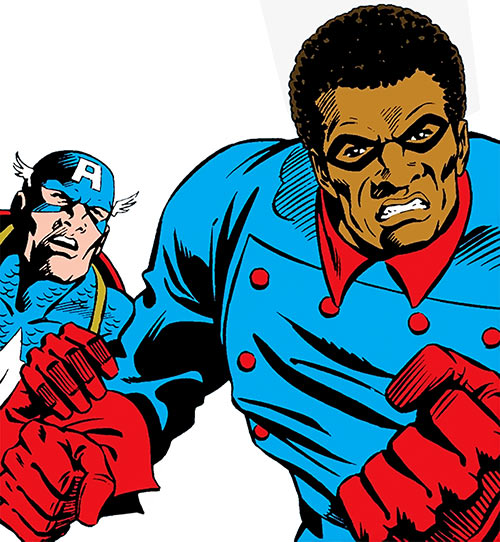 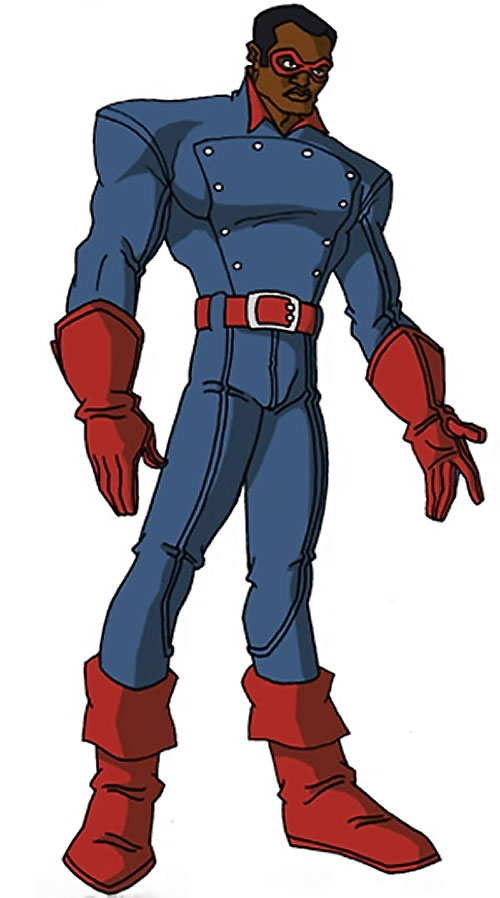 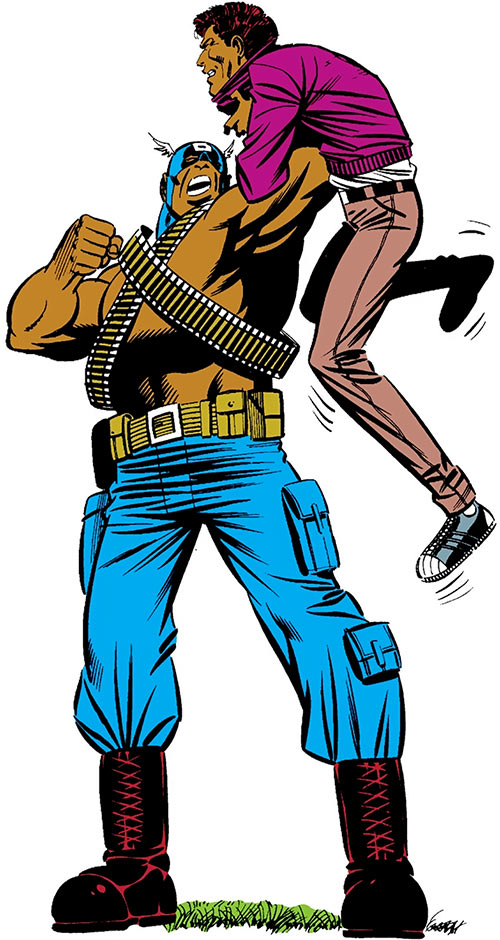 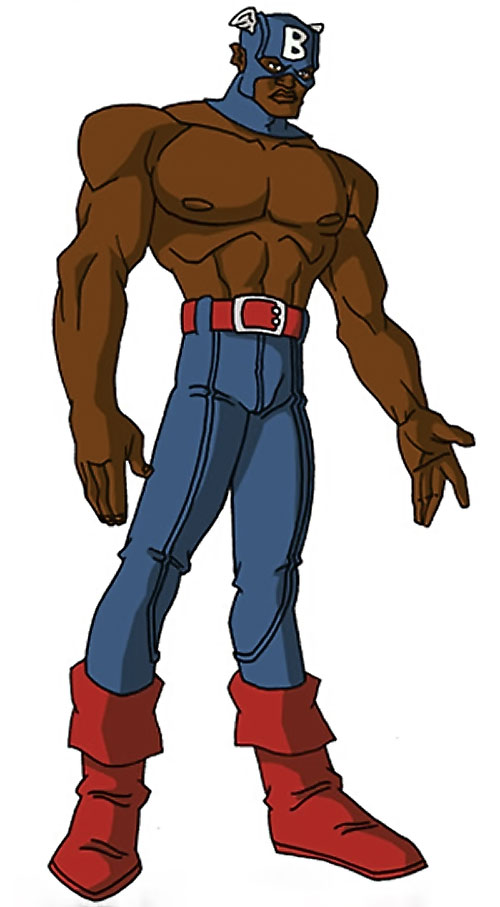 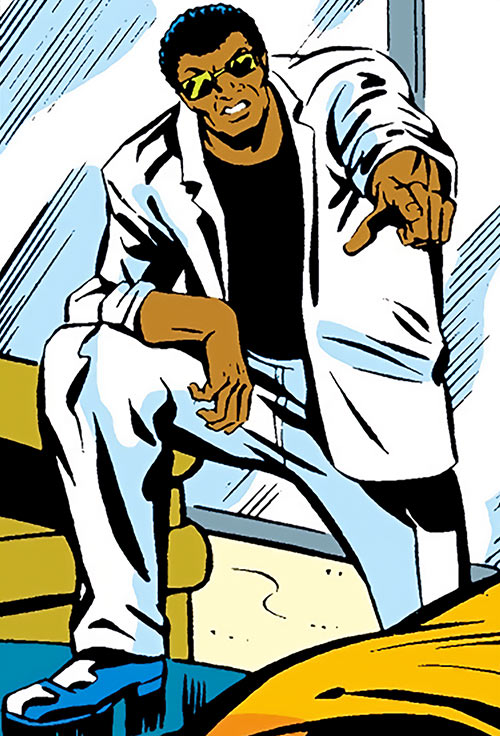 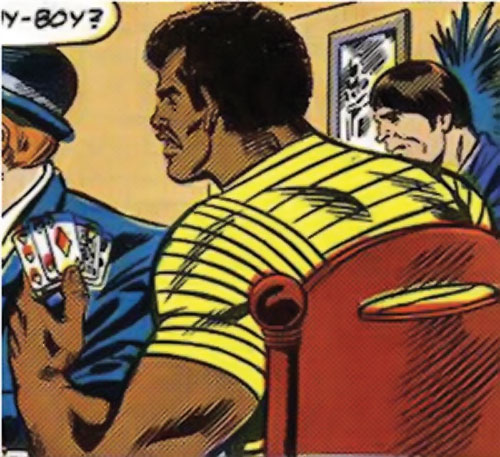